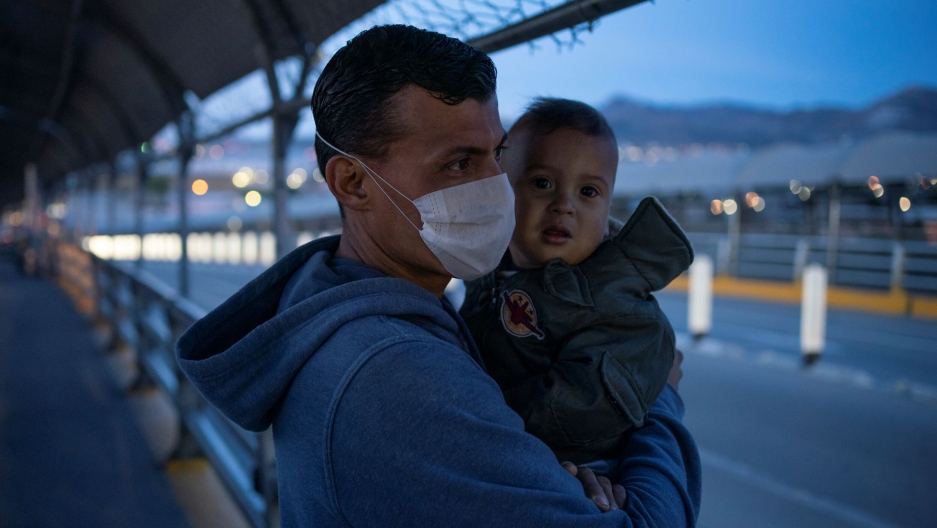 Roberto, 37 with his step grandson Andre, 2, from Honduras, who are in the Migrant Protection Protocols program, wait in line on the Paso del Norte International Bridge to have their court dates changed after court cancelations amid the coronavirus outbreak in Ciudad Juarez, Mexico, April 20, 2020.

President Donald Trump announced he would issue an executive order Tuesday suspending immigration to the US. The president cited the novel coronavirus and need to protect American jobs as the administration pushes states to reopen their economies — a move many governors say is not feasible without additional federal support.

Trump has used the pandemic to achieve his long-standing goal of curbing immigration, including denying asylum seekers entry to the US, which conflicts with international law. Deportations continue despite the health crisis, and multiple people deported to Haiti and Guatemala tested positive for the coronavirus on arrival in their home countries.

Also: In Europe, the lives of refugees are on hold

Oil prices drop to sub-zero territory for the first time

Oil prices dropped sharply below zero Monday, as demand and storage capacity shrink in the wake of the pandemic. Earlier this month, OPEC and Russia reached an agreement to cut production, but the move failed to stabilize the price of oil. While analysts say negative prices are, in a sense, a short-term anomoly (and gasoline at the pump won't be free), the drop highlights existing structural problems in the the industry, and some companies have started to close off wells — taking a serious financial hit.

And: Trump will consider blocking Saudi oil imports as US prices crash

Also: Global response to COVID-19 should be a model for action on climate

China's President Xi Jinping is working to crush the pro-democracy movement in Hong Kong under the cover of the coronavirus, analysts say. China supported the arrest of more than a dozen democracy activists over the weekend and is working to push through legislation that undermines the "one country, two systems" principle that governs Hong Kong. Mass protests last year, sparked by a proposed extradition law, brought hundreds of thousands of people to the streets, despite harsh crackdowns by authorities.

COVID-19 is a threat for people in many refugee camps across the world. Sanitary conditions are typically not ideal, and social distancing is nearly impossible. But at two camps in northern Syria, residents face the virus as well as stigmatization tied to their lives under ISIS. Since the fall of ISIS, countries have grappled with the question of what to do with individuals who left to join the group. Those suspected of having ties with ISIS face stigma back home. And coronavirus is another threat.

From The World: Indians stranded in the US due to coronavirus face poverty, eviction

UK lockdown could see beer flowing down the drain

It’s like a scene straight out of the Prohibition era: barrels of beer poured down the drain. But it isn’t 1920s America — it's Britain today. The Campaign for Real Ale (CAMRA) predicts that 50 million pints worth of beer will be dumped in the United Kingdom within weeks if the country’s lockdown continues. Since March 20, all restaurants and pubs have been closed. Bar owners are struggling to cope. But some doubt that even a pandemic can end the British love affair with the pub.

And: ‘Sewage surveillance’ may be early warning tool in fight against COVID-19, says one study 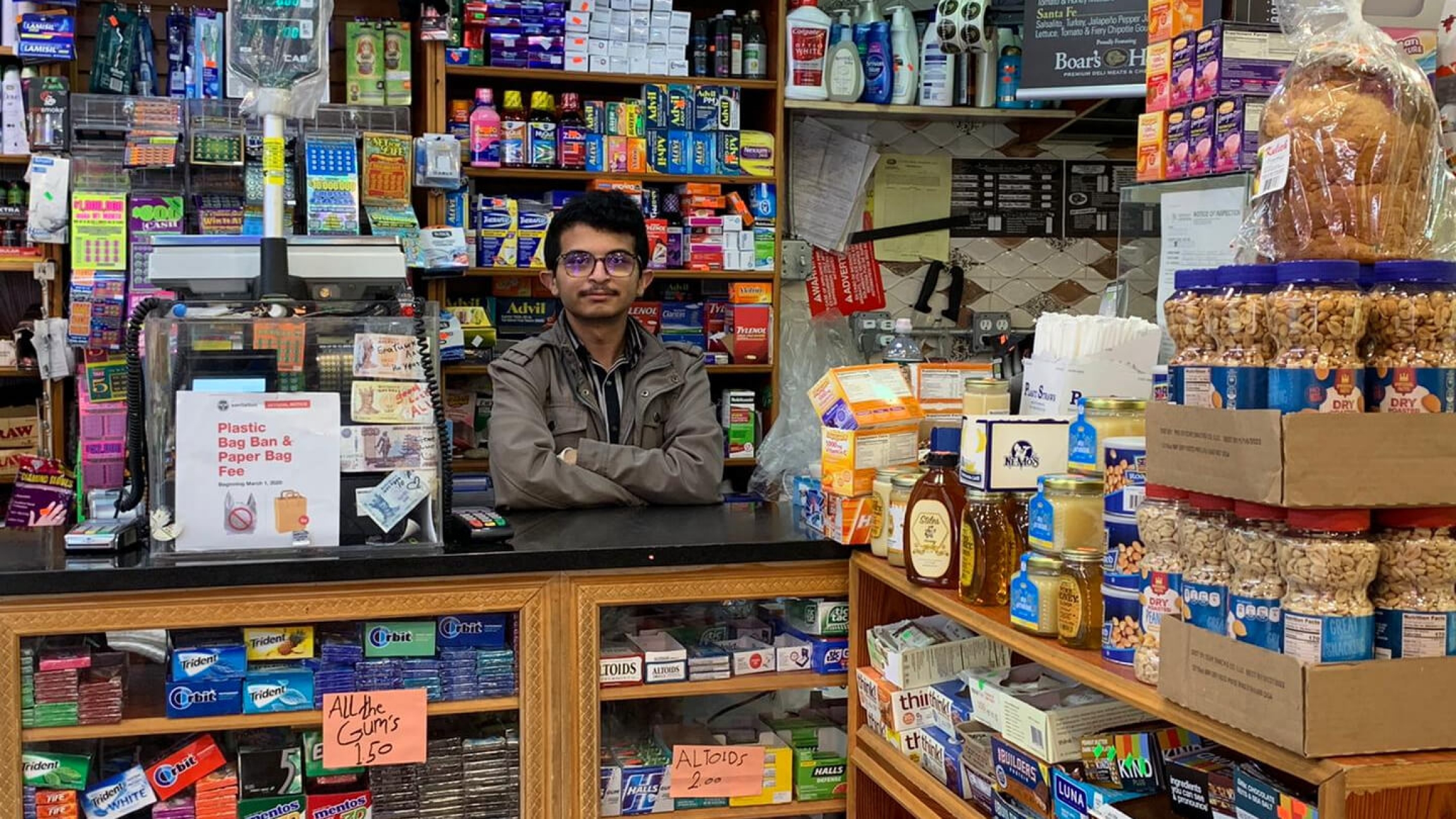 Nasim Almuntaser stands inside his bodega filled with products in Brooklyn, New York.

In some New York neighborhoods, bodegas provide more than 80% of the food that residents buy. Many of these businesses are owned and operated by immigrants, and hundreds of Yemeni bodega workers in New York City are on the front lines of the COVID-19 fight, just like doctors and nurses. Now, there is a community campaign to bring them safety kits.

“I think we needed to be treated [as] equal as first responders. Because in a way, even though we are not going to the scene — we are the scene, right?" said Nassim Almontaser, a bodega worker. “We are what’s going on in New York City. People are coming to us. A lot of supermarkets are closed. You know, we really need people to take this seriously.”

Is your partner's work-from-home routine as frustrating as it is for anonymous England-based street artist Banksy's wife?

Listen: Immigrants are likeliest to be frontline workers amid coronavirus pandemic 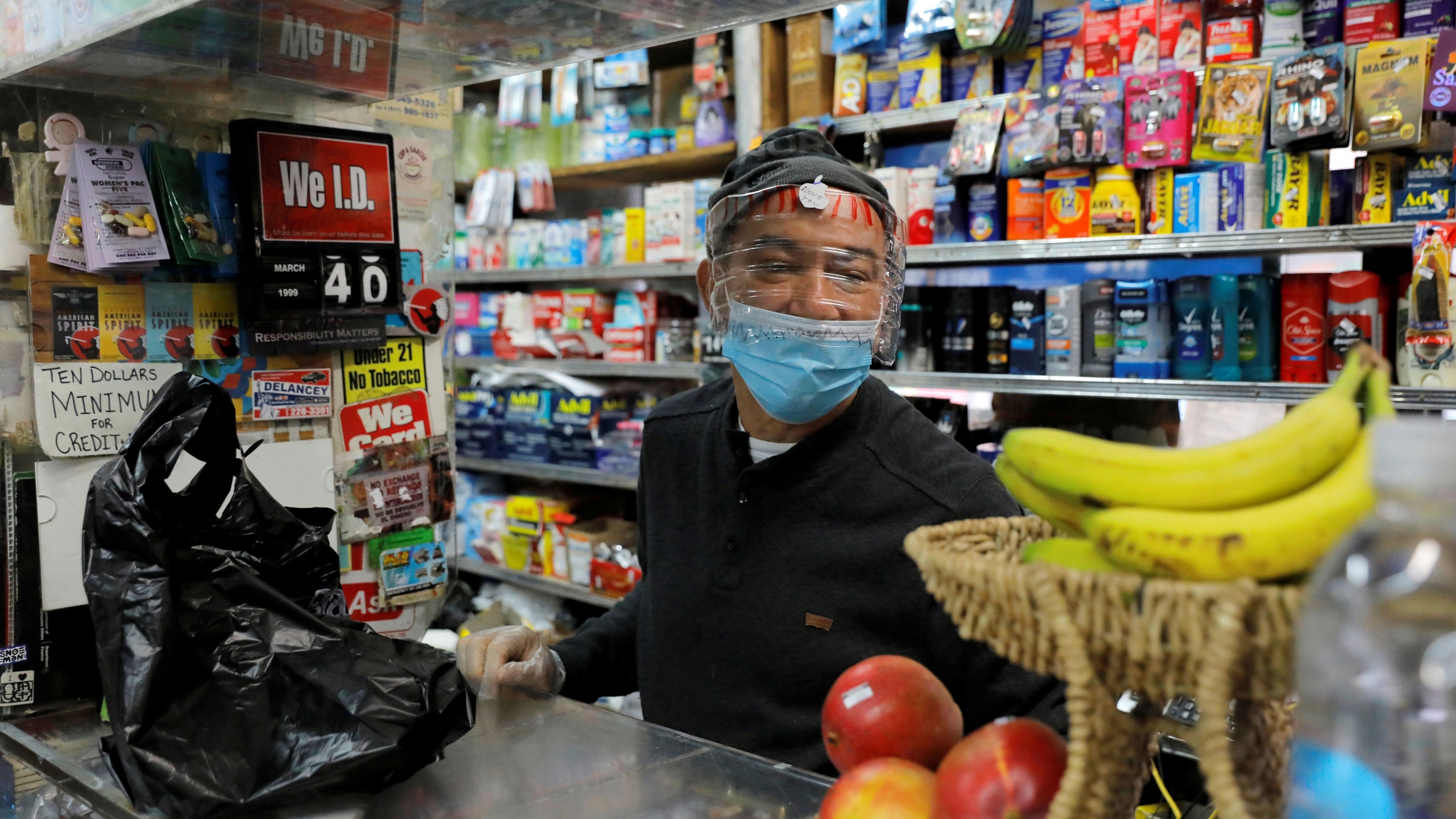 Hassan Akkad is a BAFTA award-winning documentary filmmaker who filmed his journey as a Syrian refugee traversing Europe. But when the coronavirus hit London, where he lives, he decided to take on a new role: hospital cleaner. And in Mexico, radio stations in Indigenous communities are trying to fill critical coronavirus information gaps. In New York, bodega workers say they face shortages of face masks, gloves and hand sanitizers even as they work on the front lines of serving their communities. And scientists have found the coronavirus in human sewage, which means that the virus can multiply in the human gut. Host Marco Werman speaks with Gertjan Medema, a professor at the KWR Water Research Institute in the Netherlands, about the implications of this finding.