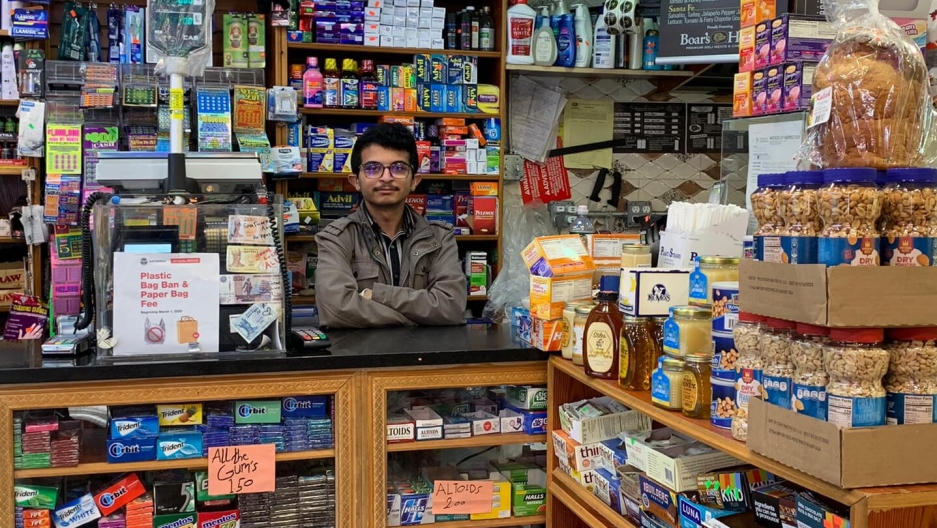 Nasim Almuntaser stands inside his bodega filled with products in Brooklyn, New York.

For the past decade, 20-year-old Nasim Almuntaser has been helping out at his parent’s grocery store in Brooklyn, New York.

He’s a student at Brooklyn College, but now that schools are closed, he’s spending more time at the bodega.

“It gets very busy. We sell fruits and vegetables, and people depend on us,” he said.

As the coronavirus pandemic hit New York City, some bodegas have shut down or cut their hours.

But for the Almuntaser family, things went in the opposite direction. Demand skyrocketed, Nasim Almuntaser said, and so, his parents decided to keep their store open 24 hours a day.

“We’re one of few stores on the block that is open 24 hours,” he said.

It’s good business, for sure. But Nasim Almuntaser is also stressed out because he doesn’t have masks and gloves that protect him. He said he has been wearing the same mask over and over.

“I have never thought of fear going to work. Simple fear — like not waking up the next day,” he said.

Bodegas can be a minefield for the coronavirus. The shops are often small, cramped spaces that offer little room for social distancing. Some stores have put up plexiglass, Nasim Almuntaser said, which separates employees from customers.

But at his workplace, they haven’t done that because employees have to move around the store to help customers with fruits and other merchandise.

In some neighborhoods, bodegas provide more than 80% of the food that residents buy, according to a report put out by the city. Many of these businesses are owned and operated by immigrants.

“Ninety percent of Yemeni Americans are merchants. They own a bodega, they own delis, they own a smoke shop."

“Ninety percent of Yemeni Americans are merchants. They own a bodega, they own delis, they own a smoke shop,” said Debbie Almontaser, who heads the Yemeni American Merchants Association, a group that represents more than 4,000 small business owners across New York City.

When the outbreak began, she said, “Some bodega workers didn’t realize how serious it was. ... Many of our bodega owners, as well as their workers, work, you know, 12- to 14-hour shifts,” Debbie Almontaser explained. “They don’t have the luxury to follow the news and keep up to date with everything.”

In some cases, she said, language is a barrier. So, her organization started translating educational material about COVID-19 and sent them to bodegas across town.

And now, they have launched a campaign called the NYC Mask Mission to donate safety kits to essential workers including bodega employees.

The kits include a handful of masks, a bottle of hand sanitizer and a box of 100 latex gloves, Debbie Almostaser said.

These items have been in short supply in the city, so Debbie Almontaser had to rely on personal contacts to secure them. She said the Yemeni American Merchants Association will be bringing 100,000 KN95 masks from China. Of the masks, 75,000 of them will be distributed to health care workers, the fire department (FDNY) and the police department (NYPD). The other 25,000 will be delivered to bodega owners. She said the city has agreed to waive tariffs on the shipments.

The World asked New York City’s Department of Small Businesses Services about protective gear for bodega workers. A representative referred The World to their website, which does not explain whether the state is providing protective gear.

Meanwhile, workers like Ali Zandani, a deli shop employee at his father’s business called the 10 Star Deli, are going without protection.

“This one mask has been on me for like a week and a half now ... which you’re supposed to change every six hours."

“This one mask has been on me for like a week and a half now,” he said, “which you’re supposed to change every six hours.”

Zandani, a high school student, has been helping out at his father’s store in downtown Brooklyn.

“It’s a couple of blocks from the Brooklyn hospital, where the two trailers with all the dead bodies are in,” he said.

Sometimes, the nurses from the hospital stop by the store and talk about their experiences.

“They see people dying in front of their own eyes, which is very sad,” Zandani said.

They also give him advice on how to sanitize surfaces in the deli and how to keep safe.

He’s doing his best, he said, but he knows it’s a risk to come to work.

“I get home, and it’s hard. I don’t want to catch it when I’m outside and pass it onto my sisters and my family,” Zandani said. “I have my grandma who is upstairs. She’s pretty old, and I don’t want to pass that onto her.”

Several bodega workers told The World that they feel like they don’t have a choice but to keep their businesses open. Their neighbors depend on them. And they have bills to pay as well.

“I think we needed to be treated equal as first responders. Because in a way, even though we are not going to the scene — we are the scene, right? ... We are what’s going on in New York City. People are coming to us. A lot of supermarkets are closed. You know, we really need people to take this seriously.”

“I think we needed to be treated [as] equal as first responders. Because in a way, even though we are not going to the scene — we are the scene, right?" Nasim Almuntaser said. “We are what’s going on in New York City. People are coming to us. A lot of supermarkets are closed. You know, we really need people to take this seriously.”

So far, the Yemeni American Merchants Association knows of at least 70 New York City bodega employees who’ve tested positive for COVID-19 and more than a dozen deaths as of Monday.