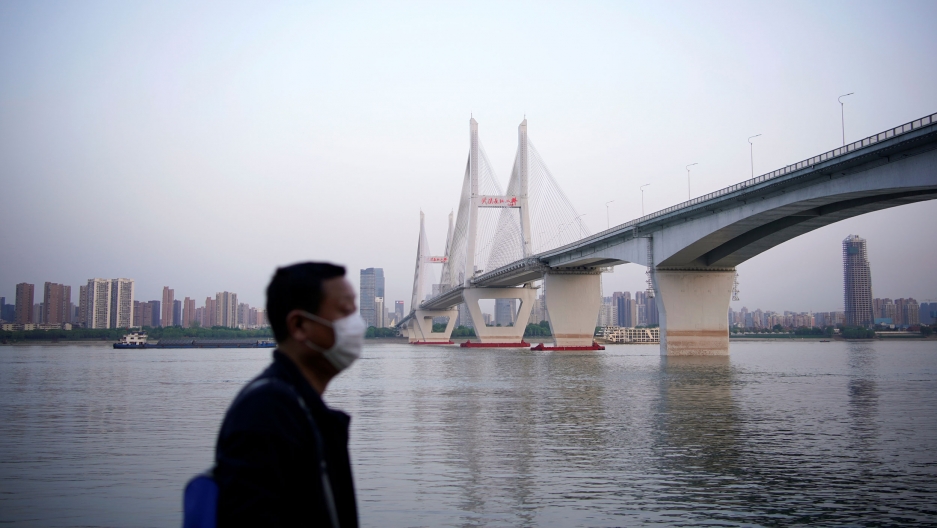 A man wearing a face mask is seen under a bridge of Yangtze river in Wuhan after the lockdown was lifted in Wuhan, capital of Hubei province and China's epicenter of the novel coronavirus disease (COVID-19) outbreak, April 15, 2020.

Wuhan, the epicenter of the novel coronavirus in China, raised its reported death toll count by 50% to 3,869. China, which has been accused of downplaying the severity of COVID-19, insisted there was no cover-up with the increased count and attributed new numbers to updated reporting and fatalities outside of health care centers.

After claiming he had "absolute authority" to reopen the US economy, Trump told governors they would be "calling the shots." The White House released loose guidelines on steps to reopen. And, stay-at-home measures in some states have faced protests, including by far-right groups.

Also: 'No fast track' to normal when it comes to reopening economies

Political shakeups in Brazil and Turkey

Brazilian President Jair Bolsonaro fired the health minister, Luiz Henrique Mandetta, after clashes over the coronavirus response. Mandetta had gained popularity for his efforts, including promoting isolation measures. Bolsonaro has been flippant about the severity of the pandemic, pointing to the need to maintain the economy.

In Turkey, the resignation of powerful Interior Minister Suleyman Soylu was rejected. Soylu had offered his resignation for his role in ordering a weekend curfew that set off a wave of panic buying and upped the risk of contagion. But his presumptive resignation triggered an outpouring of support, and Soylu remains in his post. Some theories suggest political machinations behind the move, and point to "widening cracks in the government of Turkish President Recep Tayyip Erdogan."

And: Brazil's former president brands Bolsonaro a ‘troglodyte’ who should be removed from office

Rohingya women are traditionally kept out of leadership roles. But if there is a COVID-19 outbreak in overcrowded Rohingya refugee camps in Bangladesh, the success of the response may depend in part on the status of women in the camps. One mother, Chekufa Ra, is leading a grassroots response to the crisis. She says her group of women will be prepared to respond, no matter what the men say.

And: 'We are not ready': Fears grip Indigenous groups in Guatemala as coronavirus sets in

This researcher finds hope in ‘bright spots’ among coral reefs

Australian social scientist and reef researcher Joshua Cinner looks for “bright spots,” or reefs that are doing better than expected, to glean lessons for building resilience in the world's reefs, which are suffering from bleaching events.

"We need to be thinking about how we can build resilience in coral reefs themselves, but also in the coastal communities whose livelihoods depend on the beauty and bounty of coral reefs."

And: How coronavirus could help us save our planet

Documenting the toll of coronavirus on New York City's Chinatown

It's been a month since restaurants in New York City closed because of the coronavirus outbreak. But in the weeks leading up to the mandated shutdown, mom-and-pop businesses in Manhattan's Chinatown had been struggling with a substantial decline in patronage that started around the Chinese New Year on Jan. 25 — just as news emerged of the coronavirus outbreak in Wuhan, China.

And: The Paycheck Protection Program — a loan initiative to help small businesses amid the pandemic — has already run out of money.

How researchers hope to restore the unique sound of Notre Dame

The French government has pledged to rebuild Notre Dame after a fire destroyed the iconic structure one year ago. But the cathedral was not just a landmark: It was also a concert hall with a unique sound. Now, an acoustic map of Notre Dame made before the fire could inform its reconstruction.

Acoustics researcher Brian Katz and his team have used the recordings to create a virtual reality simulation that lets the user hear how the music of a concert is transformed while flying around Notre Dame on a magic carpet. With the measurements and modeling used to design concert halls, Katz hopes he can guide the necessary choices in the restoration of Notre Dame to help recreate something that sounds like its original state.

Capt. Tom Moore, a 99-year-old World War II veteran from England, set out to walk the length of his back garden 100 times before his 100th birthday on April 30 to raise money for Britain's National Health Service. Thursday morning — using his walker and with an honor guard standing watch — he did it, raising more than $20 million for the NHS by Friday. 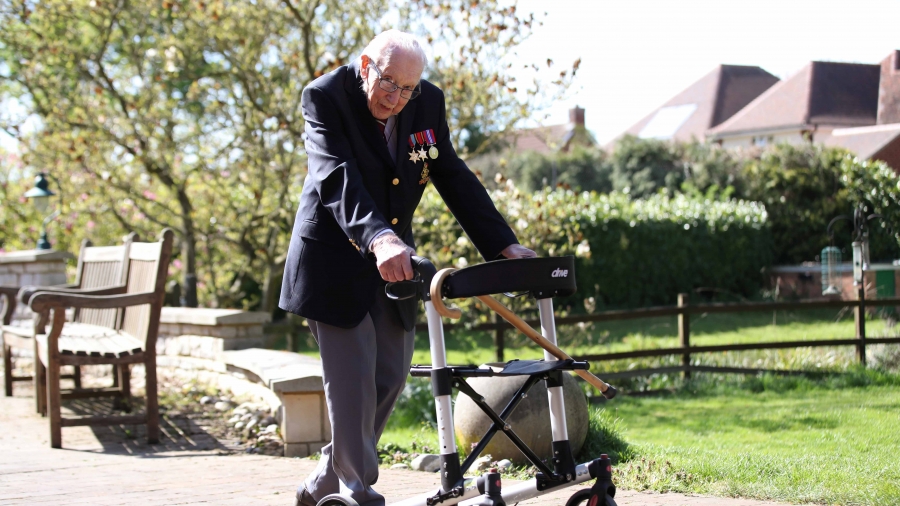 Tom Moore, 99, a retired British army captain, walks to raise money for health workers, by attempting to walk the length of his garden 100 times before his 100th birthday this month as the spread of the coronavirus disease continues, in Marston Moretaine, Britain, on April 15, 2020.

Listen: When and how to start lifting coronavirus restrictions 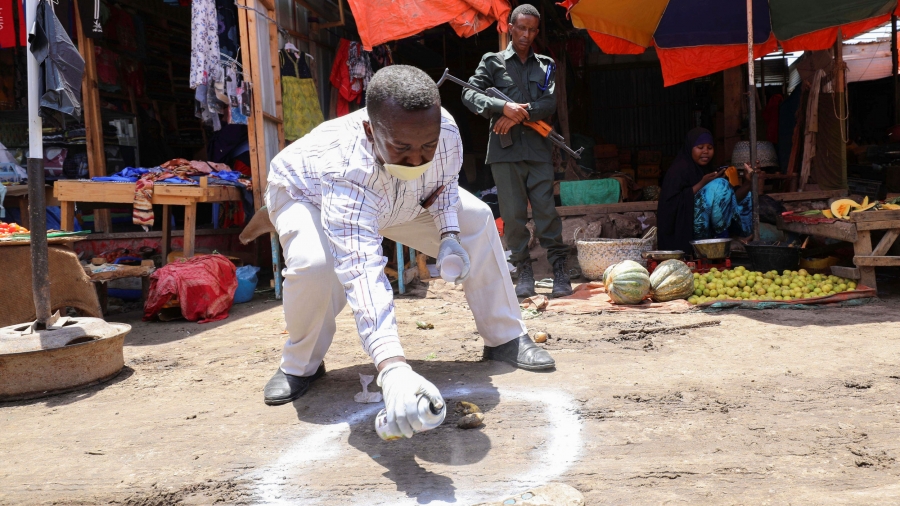 A Somali health officer marks a designation on the ground for social distancing as a measure to stem the growing spread of the coronavirus outbreak, at the market center in Mogadishu, Somalia, April 16, 2020.

Communities across the globe under strict physical distancing measures — in many cases for weeks — are now wrestling with when and how to relax those policies. And, a group of scientists is looking for antibodies in those who have successfully recovered from the novel coronavirus, which could help develop drugs to fight COVID-19. Also, Finland's government has elevated the status of social media influencers, deeming them "critical actors" and valuable assets to society, especially during a health crisis.