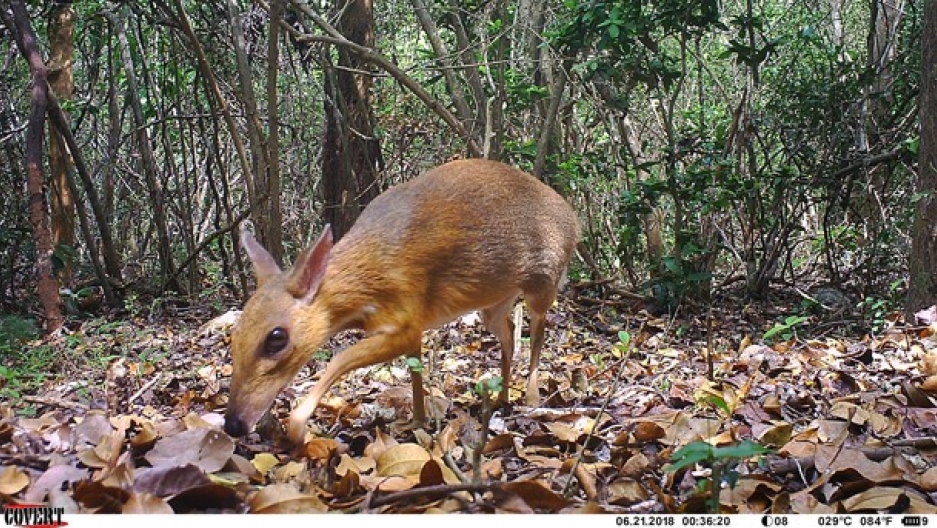 The silver-backed chevrotain lives in the scrubby forests of Vietnam’s coast. These animals, also known as mouse-deer, are the world’s smallest ungulates, or hooved animals. This photo is the first documentation of its existence in nearly 30 years.

Conservationists in Vietnam recently got some good news: A species feared extinct, the Vietnamese silver-backed mouse-deer, was documented for the first time in nearly 30 years.

There had been no scientifically validated records of this species of chevrotain for more than 25 years, and scientists were unsure whether or not it still existed in the wilds in Vietnam, Tilker said. But now, camera traps have identified at least one population of the elusive creature. The chevrotain is the first species found as part of Global Wildlife Conservation’s hunt for 25 "most wanted" species they think may be lost.

“The silverback chevrotain was first discovered in the early 1900s. ... After that, the species went unrecorded until 1990. It's only known from a small part of Vietnam. So, it's not very widespread. It really occurs in a sliver of habitat in a small part of a fairly small country.”

“The silverback chevrotain was first discovered in the early 1900s,” Tilker said. “After that, the species went unrecorded until 1990. It's only known from a small part of Vietnam. So, it's not very widespread. It really occurs in a sliver of habitat in a small part of a fairly small country.”

The chevrotain looks like a tiny deer and is about the size of a rabbit, Tilker said. “It looks like a small deer that somebody had dipped halfway into a bucket of silver paint and then pulled it out again. It's a really unique animal. There's nothing else like it.”

Tilker and the entire team were “overjoyed” when they got the first photos from the camera traps. They had felt confident they had a good chance of getting photographs of the species because local people had told them they had seen an animal that couldn't be anything else.

“But we didn't expect to get so many photos on our first try,” he said. “That was really something special and…it highlights the importance of working with local people and local ecological knowledge.”

Locals were familiar with the silver-backed chevrotain and could clearly distinguish it from the more common, lesser chevrotain, Tilker said. They conducted surveys across several provinces in Vietnam, talking to local people who spent a lot of time in the forest, In two different locations, locals described seeing a gray-colored chevrotain.

“So, the species wasn't lost to local people — which is why we try to be very careful to say that the silver-backed chevrotain was lost [only] to science,” Tilker said.

Related: Biodiversity loss has an enormous impact on humans, according to a UN report

The discovery of this particular species doesn’t necessarily mean that it is safe from extinction. Vietnam has enormous biodiversity, but it also has huge conservation challenges, including a thriving bushmeat trade. “The species is — without a doubt — heavily threatened by rampant, indiscriminate snaring because every mammal species in Vietnam is threatened by snaring,” Tilker said.

"In Vietnam, and in other parts of Southeast Asia, bushmeat is something of a status symbol,” he said. “If you're upper-middle class and you want to show off to your friends, an easy way to do that is to…go to a bushmeat market and buy bushmeat rather than domestic meat.”

This so-called “luxury meat industry” is fueling the snaring crisis in Vietnam that is catching chevrotain and many other species, he said. So Tilker and his team are intentionally not releasing the name or location of the site where they captured their photos, so no poachers who might want to hunt something different or novel know where to look.

“We know that the species is threatened by poaching. There’s no question about it,” Tilker said. “The question is, how severe is that threat? Is it pushing the species to extinction or do we still have a small window of time?”

For Tilker, the work is just beginning. The first step, he said, is securing this single, known population. The second step is try to figure out where else the species occurs. “If we lose this species from Vietnam — because they're only found in this country — then that equates to global extinction," he said. "We don't have backup populations, as far as we know.”

Tilker is happy to be able to tell a positive story about Vietnam, which “has incredible biodiversity and is losing that biodiversity at an unsustainable rate.”

“The fact that we're able to tell a positive story, I think, gives much-needed momentum for a positive outlook to conservation in Vietnam,” he said. “I've seen that in my interactions with local stakeholders, both from NGOs [nongovernmental organizations] and also from the Vietnamese government. It's nice to be part of a story that has such a positive direction because I think that's often needed when you're working in such a difficult field.”

This article is based on an interview with Aynsley O’Neill that aired on Living on Earth from PRX.