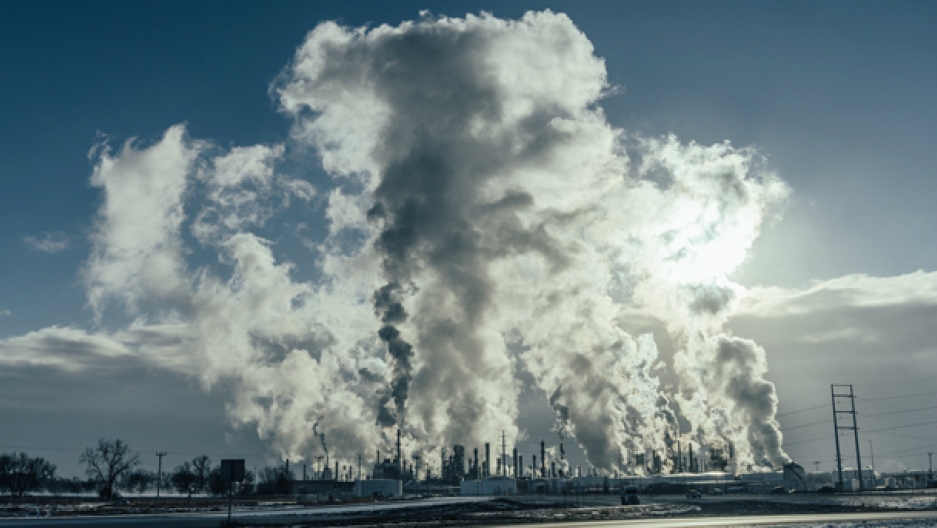 In 1998, Koch Industries was fined $6.9 million for illegally releasing heavily polluted wastewater from its Pine Bend oil refinery in Minnesota.

For decades now, climate policy has been stymied in the United States by a well-funded campaign of denial that includes elected officials dependent on campaign contributions from fossil fuel interests. And much of this anti-climate regulation effort can be traced back to one powerful man: Charles Koch.

Charles Koch built the company he inherited from his father, Fred, into a financial powerhouse based on oil and gas. Koch Industries earned Charles, and his late brother David Koch, a massive fortune — as much as $100 billion.

A new book, “Kochland: The Secret History of Koch Industries and Corporate Power in America,” by business reporter and author Christopher Leonard, chronicles the rise of this behemoth and shows how it has shaped American society.

To begin with, Leonard said, Koch Industries is one of the largest private companies in the United States. “Their annual sales are larger than that of Facebook, Goldman Sachs and US Steel combined,” he said. “This is a company that specializes in the sorts of businesses that underpin civilization.”

They refine the fuel people use to drive to work, Leonard said. They make synthetic fibers in carpet, wall paneling, building materials and glass windows; they make the sensors in our cell phones; they’re the third- or fourth-largest producer of nitrogen fertilizer in the world, which is the literal foundation of the global food system.

"If you eat, Koch Industries is almost certainly making a profit off of that activity."

“So, if you eat,” Leonard said, “Koch Industries is almost certainly making a profit off of that activity.”

When Charles Koch took over the company in 1967, it was kind of a “motley assortment of different assets, almost all of them in the fossil fuels business,” Leonard said. “It's critical to note they started in fossil fuels and processing fossil fuels. That determined the direction of the entire empire from there.”

But from the minute he took over the company at age 32, Charles Koch resolved to shape the company to his vision, Leonard said. First, he was determined the company remain privately owned. He knew that outside shareholders would be bugging him about profits every quarter and he did not want that interference.

The Koch company’s headquarters is in Wichita, Kansas, in a dark, limestone building that looks like “an opaque, obsidian black cube,” Leonard said — an architectural feature that is not accidental.

“[It] really reflects this firm's modus operandi,” he said. “They’re strategically secretive. The secret to their success is that they know more about the world than other people and they keep what they know very close to the vest and then they execute on what they know, to their benefit.”

Related: Koch Industries made millions from deals with Iran

Charles Koch himself projects an “avuncular, kind, modest persona,” according to Leonard, and he has engendered great loyalty in the people who work for him.

“He doesn't pound his fist on the table. He doesn't denigrate people who work for him,” Leonard said. “He's pretty merciless. He's pretty exacting. He's pretty relentless. But he's not cruel or arbitrary. And he holds himself, I think, to the same exacting high standards that he holds his lieutenants to.”

While the Koch brothers have never been friends of environmental activists, Charles Koch learned early on an important lesson about breaking environmental laws, and he worked hard to never do so again, Leonard said.

In the 1990s, a machine broke down inside the Pine Bend refinery in Minnesota — a facility Leonard calls “breathtakingly profitable.” They had several legal options for dealing with this problem, which would have exposed them to costs and fines, so they instead chose the illegal option: dumping ammonia-polluted water from a fire hose out the back of the refinery and into nearby wetlands. Hundreds of thousands of gallons a night of toxic water flowed into the environmentally sensitive area.

“An environmental engineer at the plant named Heather Faragher tried to get her bosses to stop and was sidelined, marginalized and ignored, as they continued to break the law,” Leonard said. The company was eventually caught and fined a record amount by the US Department of Justice.

At the same time, the company was levied another record-breaking fine for hundreds of pipeline leaks. And at a refinery in Texas, one of the machines was emitting carcinogenic benzene. “They didn't shut it down and a manager falsified reports to environmental regulators — another criminal case,” Leonard says. “You saw this [kind of behavior] across the company.”

To his credit, Leonard said, in 1999, Charles Koch brought in all his top leaders and he said, “This is going to stop.”

“They fired virtually every division president in the company — fired them all,” Leonard said. “They hired in new people. They restructured the company. And Charles Koch imposed this new theory called 10,000 Percent Compliance, which is that 100% of the people are going to comply with the law 100% of the time.”

That may sound like a corporate buzzword, but it’s a real thing, Leonard said. These days you don't hear about explosions at Koch refineries or massive pipeline spills.

“There are problems. I'm not trying to sugarcoat it,” he said. “[For example], at Georgia Pacific, workplace injuries have been on the rise since 2012. It’s not perfect. But they took complying with the law very, very seriously.”

But this wasn't because the company wanted to a good Samaritan, Leonard said. The real reason was to keep regulators off their properties — “no more Feds, no more lawsuits. They were going to make their money by knowing more about the world than anybody else knows and executing against that knowledge. … Charles Koch did not want criminal cases interrupting that strategy.”

And, of course, the company had the lobbying apparatus to eliminate, rewrite or stop environmental regulations it didn’t like. It had the power, for example, to kill any legislation addressing climate change and carbon emissions — which is precisely what it did in 2010.

That year, the Waxman-Markey cap and trade bill passed the House and was stalled in the Senate, in no small measure due to pressure from the Koch lobbyists.

“This was a really huge moment in history for everybody,” Leonard said. “As background, we've got to remember — this seems like a different world — but in 2008, the Democratic candidate, Barack Obama, and the Republican candidate, John McCain, agreed climate change is a dire issue and we need to do something about it.”

“That was a very dangerous moment for Koch,” Leonard said. “If a price was put on carbon, it could really be a death knell for Koch's fossil fuel business because — think about how much money Koch Industries has invested in just the physical infrastructure of processing crude oil. Koch owns two of the largest oil refineries in the United States. It owns pipeline networks that transport fuel. It is one of the largest traders in crude oil supplies and other energy supplies in world markets, meaning it's leasing supertankers of oil to go from the Persian Gulf to the Gulf of Mexico. It is deeply invested.”

Putting a price on carbon would, by design, reduce demand for those fossil fuels, and the value of all those assets would fall by a number measured in trillions of dollars over a period of 40 years. “So this is a do-or-die effort,” Leonard said.

By 2009, when Congress seemed poised to pass cap and trade, a regulatory framework based on a conservative idea that would put a price on pollution and allow companies to trade against it, “Koch moved in at the most opportune time for their interests, which is when this bill moved from the House to the Senate,” Leonard said.

The company had already been “working diligently for years — decades really — to politicize the issue [of climate change], to make it seem that if you are concerned about climate change, you're a power-hungry, tyrannical liberal.”

At the same time, they “primaried” a prominent conservative Republican from South Carolina named Bob Inglis, who had publicly expressed his belief that the science behind climate change was undeniable. They ran ads against Inglis and other politicians who believed similarly and “made it politically untenable for Republicans to even acknowledge that climate change is real.”

Related: This Republican says his party's denial of climate science is 'courting disaster' with voters

“[T]hey drove all moderate Republicans off the field and made sure it was the Democrats trying to do this alone,” Leonard said. “And by doing that, they raised the heat to such a temperature in the Senate that the bill died a quiet and ignoble death.”

While Leonard acknowledges the strong negative feelings toward Charles Koch and the Koch empire, he also said he is “in awe of what Charles Koch has built.”

“Listen, I don't mean to cop-out. I really feel like my job is to describe what happened,” he said. “The value I can bring is getting inside the organization and reporting to you accurately what they did, how they think, and what's going on.”

“So, here's what I take away, just personally," he said. “It is so easy to underestimate the people inside Koch Industries. I was blown away by the level of sophistication and intelligence that exists inside of that institution. And the chapters toward the end of the book about politics are disturbing. I don't mind saying that. I mean, they burned down the moderate wing of the Republican Party and we're all living with the consequences of that, and I won't sugarcoat it.”

“But at the same time, agree or disagree with their political goals, this really is a case study in long-term strategic thinking,” Leonard said. “In our country, our politics, and our business, long-term strategic thinking is in desperately short supply … and this is a really great case study of a group that had a plan and stuck with it over decades."

“So, I think it's easy to condemn and try to turn them into cartoonish villains when they're really not,” he said. “The people who work for Charles Koch really admire this guy, and he's a human being. Now, I think the rub is that he's a profoundly powerful human being. And when that much power is concentrated in the hands of one or a few people, you can have pretty negative side effects and consequences from it.”