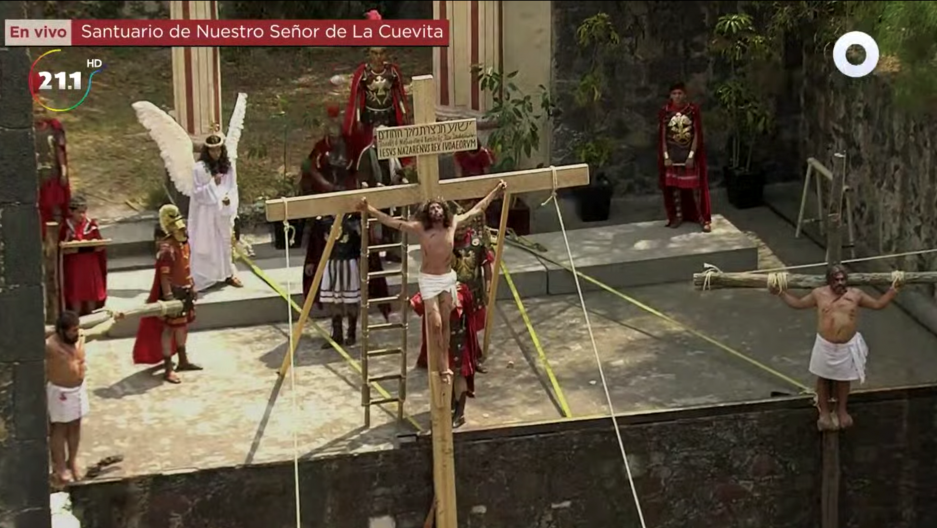 Mauricio Luna, 19, portrayed Jesus in a reenactment of the Catholic observation of the Stations of the Cross in the Iztapalapa borough of Mexico City. The event usually draws thousands of worshippers and tourists but was moved behind closed doors this year.

Screenshot via Canal Once

Every year, before the Christian holiday of Easter, worshippers in a cluster of neighborhoods along Mexico City’s east side get ready for a crush of visitors. Thousands gather to watch a live reenactment of the day Jesus was crucified.

The reenactment — one of the biggest Passion plays in the world —  centers around a local actor who wears a bloodied red robe and a crown of thorns as he drags a 200-pound, wooden cross through the streets of the borough of Iztapalapa.

The Passion play of Iztapalapa has long been an important tradition for Catholics across Mexico. Hundreds of actors dress up to reenact how Jews and Christians flailed and crucified Jesus. And each year, the procession is trailed by ordinary people of faith called nazarenes, who carry their own heavy crosses to make penance.

But this year, as authorities in Mexico and many other countries have banned large gatherings to prevent the spread of the coronavirus, organizers moved the stations of the cross behind closed doors. The faithful were able to watch a livestream.

For many, the Passion play of Iztapalapa without spectators is unthinkable.

“You have to understand that for a lot of people, seeing the young man who portrays Jesus is like seeing Jesus Christ himself.”

“You have to understand that for a lot of people, seeing the young man who portrays Jesus is like seeing Jesus Christ himself,” said Tito Dominguez, who helps organize the play and has been involved in it for four decades. “It’s cathartic.”

This year, actors reenacted the stations of the cross in the atrium of the Iztapalapa cathedral — visible to the public only through a local television broadcast.

For Mauricio Luna, who was chosen to portray Jesus, not having a live audience of worshippers made him feel a heavier responsibility, he said.

Luna, a 19-year-old studying sports and recreation management, was chosen in January from a field of about two dozen applicants. The requirements included being a resident of Iztapalapa, being single, in good health and without tattoos. Luna began physical training in January to carry a 200-pound cross for what would have been a roughly 1.2-mile procession.

Yet, he says what was truly difficult was the spiritual preparation.

“Here in Iztapalapa, when you’re chosen as Jesus, you become the eye of the storm,” Luna said. “You represent not only Jesus, but also the community and the faith of the community. You represent humility, love and respect.”

The event in Iztapalapa, once a small town that was absorbed by Mexico City’s urban sprawl, has its origins in another period of widespread disease: the cholera epidemic of the 1800s, Dominguez said.

About 14,000 people died of cholera in the Mexico City area from July to October 1833, according to Revista Ciencias, published by the National Autonomous University of Mexico. Survivors in Iztapalapa, mostly orphans, prayed to Jesus for the miracle of stopping the cholera outbreak, Dominguez said. A decade later, in 1843, they began to reenact the stations of the cross as a way to show gratitude to Christ for ending the outbreak. 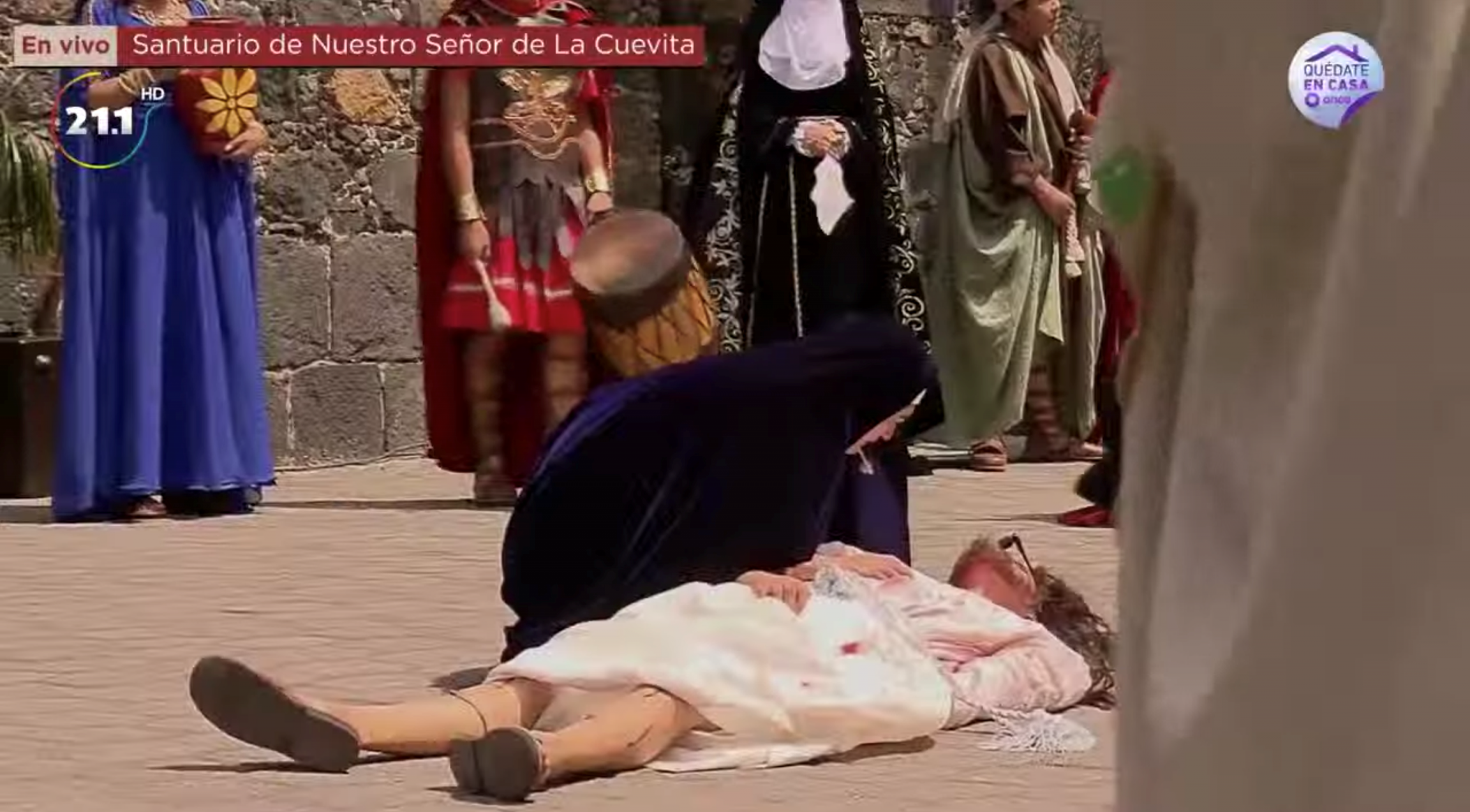 Ana Laura Ortega Jurado, 19, portrayed the Virgin Mary and Mauricio Luna, 19, portrayed Jesus in a reenactment of the Stations of the Cross in Mexico City on April 10, 2020.

Screenshot via Canal Once

Ortega Jurado prays on Easter every year, she said. This year is different.