When the governor of Tabasco announced a ban on alcohol sales April 1 as part of the southern Mexican state’s COVID-19 lockdown, residents flocked to the stores. They had less than 12 hours until it took effect.

“I immediately went to Sam’s Club to stock up. The store was saturated with people,” said José Escamilla, a civil engineer who lives in Tabasco and bought three bottles of whiskey. “Their shopping carts [were] filled with boxes of wine and beer.”

The governor, Adán Augusto López Hernández, announced the ban on video from his self-imposed quarantine because he has tested positive for the coronavirus. “We are temporarily suspending, as long as this health emergency lasts, the sale of alcoholic beverages and beer,” he said.

In the United States and elsewhere, alcohol sales shot up as restaurants and bars closed to slow the outbreak. But millions of people around the world are complying with “stay-at-home” orders without a glass of wine or beer to calm the nerves. In parts of Mexico, South Africa, Thailand and Greenland, government officials have banned sales of beer, wine and liquor in an attempt to limit social gatherings.

The bans also aim to temper alcohol-fueled domestic violence, which women’s rights groups and the United Nations warn is on the rise as people are stuck at home with their abusers. In addition, heavy drinkers are at greater risk of developing acute respiratory distress syndrome, also known as ARDS, a common cause of death related to the coronavirus, according to the United States' National Institutes of Health.

While there isn’t a nationwide ban on alcohol sales in Mexico — it’s still legal in Mexico City and most of the country — local officials have restricted the sale of it in some municipalities.

In tourist hot spots such as Los Cabos and Cancún, alcohol sales are now limited to certain hours. In the state of Nuevo León, the governor has suspended beer production and distribution, saying it’s not an essential service. The beers Corona, Pacífico and Victoria are all produced there.

“If there’s not going to be distribution, we shouldn't have alcohol sales,” Nuevo León Gov. Jaime Rodríguez Calderón said at a press conference. His comments set off panic-buying of beer, and the governor was forced to clarify that alcohol sales would, in fact, continue for the time being. 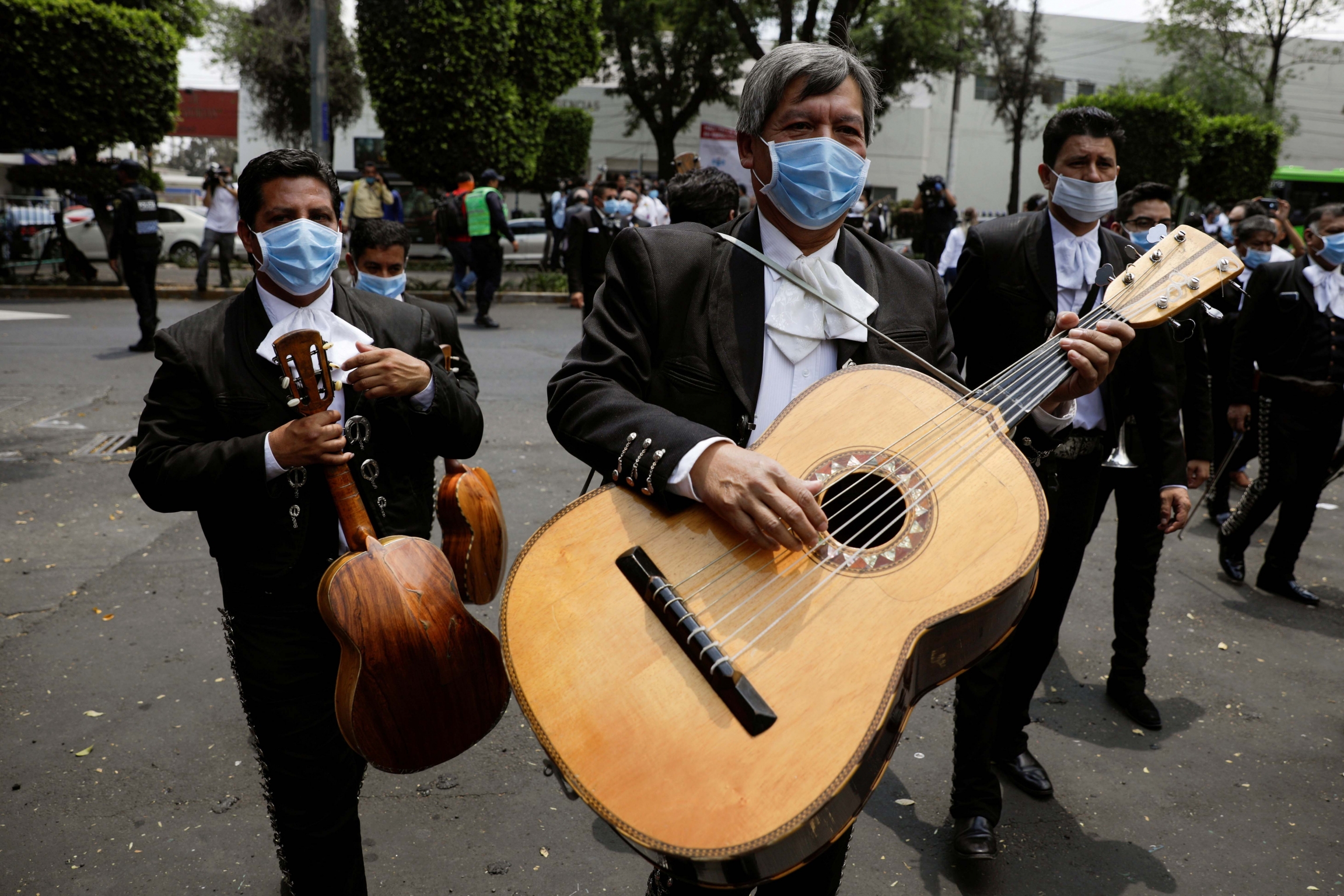 Members of a mariachi band are seen after delivering a serenade for the medical staff of the National Institute of Respiratory Diseases during the coronavirus outbreak, in Mexico City, Mexico, April 7, 2020.

There’s a long history of restricting alcohol in Mexico that dates all the way back to the Aztec era, said Gretchen Pierce, a historian at Shippensburg University in Pennsylvania and co-author of the book, “Alcohol in Latin America: A Social and Cultural History.”

The Aztecs drank pulque, a fermented beverage made of agave, and considered it to be sacred.

“Only certain groups were allowed to drink it — so, for example, the elderly, lactating women, warriors, groups like this,” Pierce said.

These prohibitions continued long after the Aztecs disappeared. During the Mexican revolution in the early 20th century, alcohol was prohibited because it was believed to reduce productivity among workers, Pierce said.

“What we know is that heavy drinking can worsen the impact of infection on the lungs. Because alcohol impairs the immune system,” he said.

But for most government officials, the decision to limit alcohol sales is mainly driven by societal factors.

“There’s evidence that isolation will depress people, and depression is associated with drugs and alcohol. And in Mexico, we have a lot of violence in the family setting.”

“The alcohol restrictions are more related to the psychological situation of isolation,” said Dr. Francisco Moreno, who works at ABC Medical Center in Mexico City and is treating COVID-19 patients. “There’s evidence that isolation will depress people, and depression is associated with drugs and alcohol. And in Mexico, we have a lot of violence in the family setting.”

In other words, alcohol can fuel domestic violence, especially when people are cooped up inside. United Nations Secretary-General António Guterres warned of a “horrifying global surge” in domestic violence worldwide due to the coronavirus lockdowns. According to the UN, Lebanon and Malaysia have seen the number of calls to helplines double compared to the same month last year. In China, the calls have tripled. The agency says these numbers are indicative of a much larger trend.

"We know lockdowns and quarantines are essential to suppressing COVID-19, but they can trap women with abusive partners," Guterres said in April 5 video.

In Greenland, a health minister cited domestic violence as one of the reasons for banning alcohol sales until mid-April. The ban is effective in the capital city of Nuuk. And in South Africa, government officials banned alcohol and cigarettes throughout the country for three weeks. 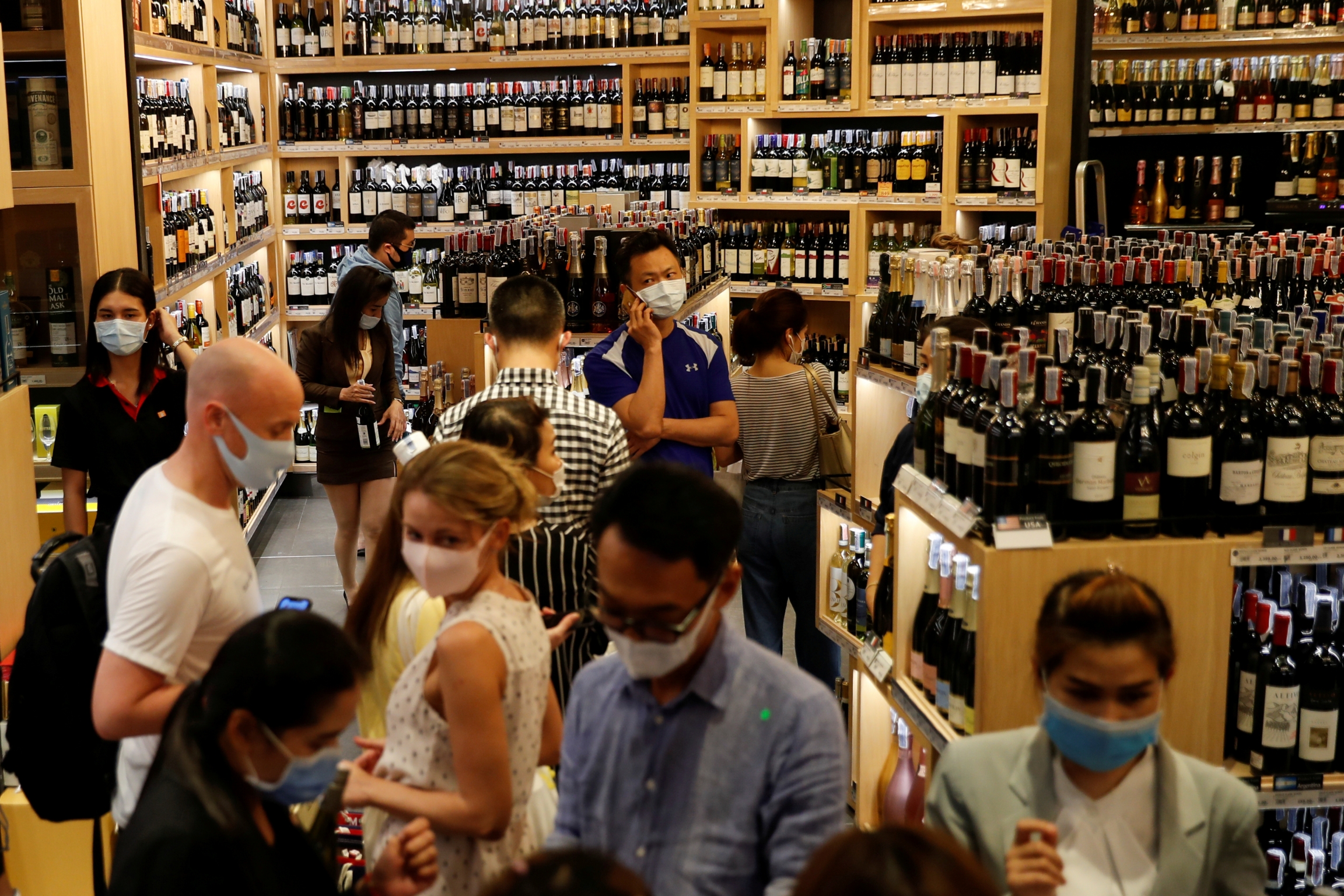 People line up inside a crowded liquor store after Bangkok and several other provinces announced a 10-day ban on alcohol sales during the coronavirus outbreak in Thailand, April 9, 2020.

“Food security is going to become a big issue. And if we have people spending the little resources they have currently on alcohol, the bigger issue is going to be hunger,” she said.

Maker Diedericks also argues that banning alcohol will lessen violence generally, which means fewer people going to the emergency room for that reason and more hospital beds for patients with the coronavirus.

But critics say the alcohol ban is counterproductive and even dangerous. There are reports of people making their own alcohol at home.

“It’s kind of paternalistic. An attitude they have toward our people and saying that 'you don’t know what’s right for you, so we are going to tell you,'” said Kerry Kopke, a lawyer and lecturer who lives in Capetown.

Kopke said she was not much of a drinker — that is, until the coronavirus crisis hit. Now, she has one or two drinks a night to “calm the nerves.”

And already, black markets for alcohol are emerging. In Tabasco, Mexico, Escamilla says he’s not too worried about the ban.

“People who want to drink are going to get their hands on it,” he said. “It will be more expensive, but they’ll find a way.”