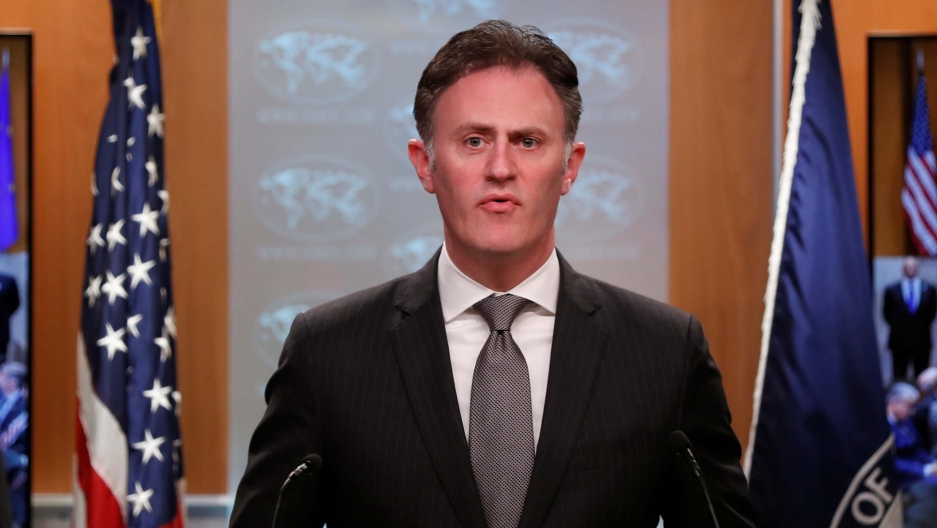 Ambassador Nathan Sales speaks during a news conference at the State Department in Washington, DC, on Nov. 14, 2019. Sales announced the designation of the Russian Imperial Movement as a terrorist organization this week.

This week, the Trump administration designated the Russian Imperial Movement, also referred to as RIM, as a terrorist organization. It’s an ultra-nationalist group based in St. Petersburg, Russia.

Related: They were once extremists. Now, they're trying to prevent hate.

The new designation allows the Treasury Department’s Office of Foreign Assets Control to block any property or assets the group has in the US. It also bars its members from travel to the US and prohibits American citizens from financial transactions with the group.

“These designations are unprecedented,” said Ambassador Nathan A. Sales, the State Department’s counterterrorism coordinator. “This is the first time the United States has ever designated white supremacists as terrorists, and this illustrates how seriously this administration takes the white supremacist terrorist threat. We are doing things no previous administration has done to counter this threat.”

In January 2017, a refugee shelter was bombed in Gothenburg, Sweden’s second-largest city. No one was killed but a janitor was seriously injured. A week after the attack, Swedish investigators announced they had three suspects. The men were members of Sweden’s largest neo-Nazi organization.

Then they announced details that caught the attention of counter-terrorism experts.

“Several of the members of the group who conducted this attack had traveled to Russia to receive some form of paramilitary training,” said Jon Lewis, a research fellow with the program on extremism at George Washington University.

The group is based in Russia but has connections around the world, Lewis said, including in the US. He said there are reports that allege RIM members had reached out to some of the organizers of the Aug. 2017 Unite the Right rally in Charlottesville, Virginia, “and had maybe offered them the opportunity to travel to Russia and conduct similar paramilitary training.”

Related: White nationalists carry torches on the grounds of the University of Virginia

There is no evidence that anyone from the US took up an offer for training in Russia, Lewis said. But State Department officials were concerned enough to designate RIM as a terrorist organization.

Experts say it’s difficult to know the exact number of members in the group. Connor Michelotti, who has done some graduate research on the group for his studies at the Middlebury Institute of International Studies at Monterey, explained that members of RIM believe “the Russian president needs to be removed and replaced with a tzar.”

To be a part of that group, he said, “you have to be a member of the Russian Orthodox church. That’s kinda the main qualifying factor there. Otherwise, you just have to be willing to go to their rallies, propagate their ideas.”

The Russian Imperial Movement is pretty obscure, says Alina Polyakova, president and chief executive officer of The Center for European Policy Analysis, a think tank based in Washington, DC.

Polyakova said she was surprised by the news that the Trump administration decided to target this particular group. To her, this is more of a political move.

“This administration has received quite a bit of criticism since the president’s election that it was not tough enough on Russia, a country that, of course, interfered in the US election, that has done other various misdeeds across the world, including Ukraine,” she said, adding that the idea behind the designation is to push back against the narrative that this administration is soft on Russia.

“The second way this was a political move,” she said, “is that the administration has been criticized quite a bit for not taking white supremacists and white nationalism, extremism very seriously in the United States. So I think this was a way for them to say we do take it seriously.”

Political or not, Christian Picciolini, a reformed neo-Nazi, said this is a positive step.

“It’s partly a forward-looking play because the alliances that this group has to other organizations, to other groups — some of them very prominent in the United States,  —will allow them to eventually add other groups to this list as well,” he said.

Picciolini said he was recruited into a neo-Nazi group at the age of 14. He went on to become a leader of the group. He recorded hate music and performed abroad.

It’s been 24 years since he left the movement and, in that time, he has been working to help pull individuals out of hate groups. He works with The Free Radicals Project, helping people around the world to disengage from extremist movements.

Picciolini said he is glad to see RIM designated as a terrorist organization. In the past, he said, the label terrorist was almost always used just for Islamic extremist groups.

“For so long, the focus for countering violent extremism or terrorism from administrations past and present has always been to focus on people that have brown skin,” he explained, “and all that time, there has been terrorism and extremism happening from extremists who have white skin. And I think it’s about time that we started to recognize that this is a problem and start to put the resources towards that.”

According to Picciolini, since the news of the terrorist designation spread, at least one white supremacist group based in the US has said it is disbanding.

And as for the Russian Imperial Movement?

Social media companies are now busy scrubbing their material off their platforms.