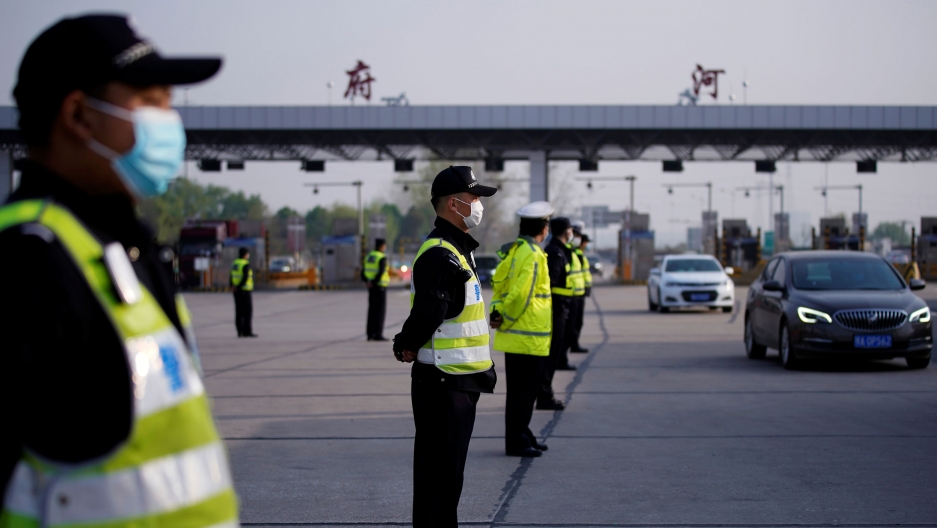 Police officers stand guard at a toll station of an expressway after travel restrictions to leave Wuhan, China's epicenter of the novel coronavirus outbreak, were lifted, April 8, 2020.

After being locked down for 76 days to contain the novel coronavirus, the central Chinese city of Wuhan began allowing people to leave on Wednesday for the first time despite fears of a second wave of infection if such restrictions are eased too soon.

China sealed off the city of 11 million people on Jan. 23 after it became clear that the flu-like coronavirus that had emerged there late last year was highly contagious and potentially deadly.

The first train to carry departing passengers out of the city left just after midnight in Wuhan, and outbound highways were opened to vehicular traffic around the same time.

Based on ticket sales, 55,000 people will leave Wuhan by train on Wednesday, state broadcaster CCTV reported, citing the railway authority.

That is slightly more than the number of people who have caught the virus in Wuhan since December. The death toll in the city has reached 2,571, about 80% of the total fatalities in China, according to official figures.

At its peak, the lockdown saw people forcibly confined to their homes and the transport and industrial hub resembled a ghost town, with streets deserted except for police patrols and emergency vehicles.

But such restrictions have eased in recent days as new infections dropped to a trickle. Mainland China reported no coronavirus deaths for the first time on Tuesday, and Wuhan has counted only two new infections in the past fortnight.

Authorities are walking a fine line between allowing greater freedom of movement and economic activity while also guarding against a second wave of infection, with particular concern around imported cases and people who show no symptoms but can still pass on the virus.

Wuhan residents are still urged not to leave their neighborhoods, the city and even the province unless necessary, health officials said on Tuesday.

Many people remain fearful of catching the disease, with China reporting 137 new asymptomatic cases on April 7.

“The number of asymptomatic patients has been slowly going up, I’m worried about this,” said Yang Chengjun, who was leaving Wuhan by train to get back to his design job in Fuzhou. He was wearing a knee-length raincoat and speaking through a mask.

Tall barriers continue to surround housing compounds in Wuhan and residents can only leave if they have a green health code or documents showing a valid reason.

Migrant worker Liu said she and her husband would still be careful about going outside even when they get home to Xiangyang city.

“My mood will be better but when I get back I still won’t go out too much,” she said.