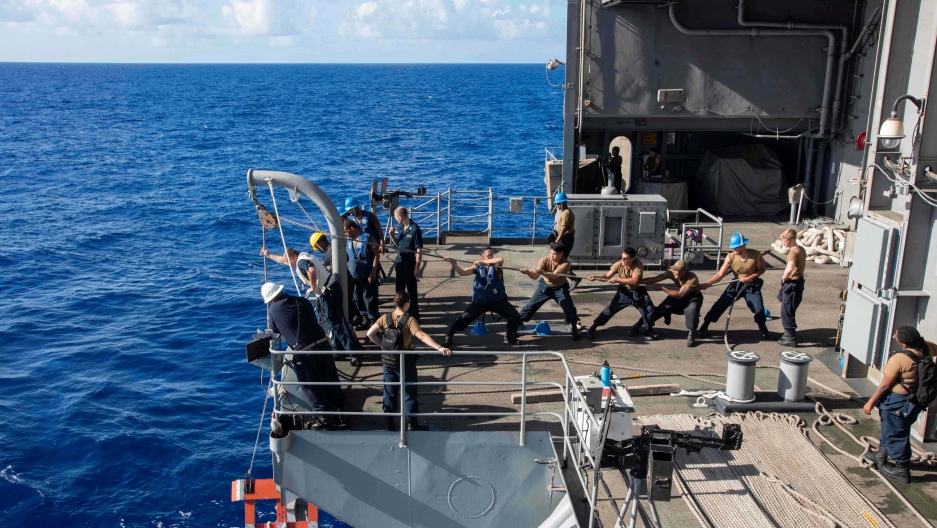 US Navy sailors raise a larne target from the fantail of the aircraft carrier USS Theodore Roosevelt in the Philippine Sea on March 21, 2020.

Editor's note: After our interview aired on The World, we learned that the Navy fired the captain of the USS Theodore Roosevelt on Thursday, according to news reports.

Sailors are especially vulnerable in the coronavirus outbreak. They live in cramped quarters on what some have called large, floating petri dishes.

A US aircraft carrier is currently docked off Guam, the US island territory in the Pacific. More than 100 sailors on board have tested positive for the coronavirus, so thousands of crew members have disembarked.

Earlier this week, the captain of the aircraft carrier USS Theodore Roosevelt wrote a scathing letter to Navy leadership asking for stronger measures to control a COVID-19 outbreak onboard. The letter, which was leaked to the media, described a bleak situation aboard the nuclear-powered carrier as more sailors tested positive for the virus.

The letter put the Pentagon on the defensive about whether it was doing enough to keep the warship’s 5,000 crew members safe, and alarmed the families of those aboard the vessel, whose home port is in San Diego.

When it comes to sailors' safety and their readiness to defend the US on the high seas, the buck stops with Acting US Navy Secretary Thomas Modly. He spoke to The World's host Marco Werman from the Pentagon.

Related: 'Sailors do not need to die,' warns captain of coronavirus-hit US aircraft carrier

Marco Werman: Thanks very much for taking the time today, Secretary Modly. What is the latest on your sailors on the USS Theodore Roosevelt in Guam? How are they doing?

Thomas Modly: Yeah, we've gone through a pretty methodical process out there to rotate sailors off the ship. We're reacting on the fly and in a lot of ways to circumstances on the ground as this virus continues to spread. And I think, you know, no one was naive enough to think that it wouldn't go on to a ship. And so no one's panicking. It's going well.

The challenge we have is that that ship is not a cruise ship. It is a warship. And it has two nuclear power plants on it, and it's got a lot of weapons and aircraft, and so you can't just evacuate everybody. You have to maintain a certain level of people that can work the ship, maintain the security of the ship. And that's about 1,000 people, maybe, you know, between 800 and 1,000 people that we have to make sure are clean and can continue to work on the ship.

Obviously, an aircraft carrier, nuclear powered, makes a huge difference. Is there a playbook for this kind of situation or have you been creating one as you go along?

I think everyone is sort of reacting on the fly to this pandemic. I will say, if I can emphasize a point, I think we have up to about 111 people on the ship who have tested positive right now, and we've tested over 1,000 people. So, you know, it's about a 10% hit right there. But I also would say none of those sailors are hospitalized or have had to have been hospitalized. They've got mild to medium symptoms. It's like the flu. Some of them have no symptoms at all.

As we're planning for a pandemic, the military did have intelligence on this. So, when did the planning really start to address potential scenarios like what you're now facing with the USS Roosevelt?

Oh, it started immediately. We started talking about this, you know, way back in January in terms of how we would react and getting guidance out to the ships. This is the only deployed ship we have that has any cases on it. In any one given time, we have 90 or so of these ships out there at sea. And this is the only ship that we have that's deployed that has this situation on it right now. We've had some other cases in the single digits on some ships that are in port. We've been quickly able to isolate those people and keep the virus from spreading rapidly.

But now we've been planning for this and thinking about this and looking at contingencies and asking our teams to be creative, not just in how they prevent the spread on the ships, but how the Navy-Marine Corps team can come to the aid of the nation in this process. And we've sent two big hospital ships to Los Angeles and New York to help out with that. The process of getting them ready was accelerated by months to get them ready. We had well over 200 volunteers from our Reserve Corps volunteer to go into the fight with us on this.

Surely, you can't be counting on the Roosevelt being the only vessel that'll be impacted by the coronavirus.

We think there will be others that will be impacted by this. I think that's just a natural thing. But we're not allowing any of the ships to go into port and — now we're allowing them to go into port only for supplies. But no one's allowed to go and do liberty or anything like that. So, we've really tightened that down.

Secretary Modley, goals you're pursuing sometimes clash. Protecting US sailors from harm can mean reducing combat effectiveness. Do those contradictory goals present you with a dilemma right now?

Look, that's always our primary objective — to maintain the safety and health of our sailors and Marines and their families. Of course, we always focus on that, but we also have a mission to defend the nation. And so you look at, you know, we have doctors that we have now sent, the doctors and medical corpsmen that we sent in, to two of the biggest hot spots in the country, New York and Los Angeles. You know, that's what the nation expects their armed forces to do, to come to the assistance of the nation when it needs it. And that's what we're doing.

How much has the US Navy deployed to domestic hospitals right now in setting up field hospitals?

We have the two ships. We have one in Los Angeles and we have one in New York that just arrived a couple of days ago. Each one of those ships has about 1,100 on each one of them. We've also deployed something called the Expeditionary Medical Teams and sent one to assist on the ground at the convention centers in Dallas and in New Orleans. So, they're on the ground right now. We're looking at other areas where we have a couple more of these teams that are being assembled now that we can do the same thing in other cities. In all likelihood, they'll go to New York to assist in the situation there. And that's just the Navy. The Army is heavily engaged in New York City right now, helping to set up the Javits Center as a place to take on patients and other potential areas with hotels to have areas for patients to be taken care of.