Sajmun Sachdev, a 36-year-old freelance writer in Montreal, says her popularity soared on the dating app Hinge in the last month.

“I feel like they're just bored. Now, all the boys are giving me so much attention. And I'll have like, 24 messages when I wake up in the morning,” she said. “And normally, these are people who would have ghosted me four weeks ago.”

Dating a stranger while in isolation is probably not the ideal way to hook up with a new partner. But many dating apps in the United Kingdom, United States and elsewhere are reporting an increase in usage. Boredom and a little loneliness likely play a part.

Related: How families around the world talk coronavirus with kids

Talking about the new “C-word” is certainly not off the table. Sachdev says it’s all anyone on dating apps is talking about.

“Ninety percent of the guys have started to make COVID-19 jokes or say that you should date them, because they have a stash of toilet paper and hand sanitizer.”

“Ninety percent of the guys have started to make COVID-19 jokes or say that you should date them because they have a stash of toilet paper and hand sanitizer,” she said.

But joking about the virus might not be the best way to attract a date. Sachdev met a man called Sergey on Hinge a few weeks ago; he was an attractive guy who was into kickboxing. (Sergey's full name isn't being used for privacy reasons.) They chatted for a while and arranged to meet for a date. Then one day, Sergey said he wasn’t feeling very well.

“He was like, ‘Oh yeah, I was having headaches and I wasn't sure if it's from the coronavirus or it's from a concussion.’ And I was like, 'Excuse me? What?' And he said, ‘Yeah, I was just in China.’”

Sachdev isn’t sure if Sergey was serious or not, but when he stopped messaging, she didn’t pursue it.

Most of the dating apps now warn users not to meet up in person. This goes against the usual advice that UK-based dating and relationship coach Katherine Baldwin gives her clients. But she agrees it’s too risky right now.

The challenge, she said, is not to let online conversations begin to build a fantasy about who the person really is. Baldwin says people need to put limits on their online chats.

“Just like if we were going for a coffee date, we'd want to keep that coffee date to an hour and a half. So that we don’t build a relationship that's not based on reality, because we have only just met,” Baldwin said. “We're all looking for ways to soothe ourselves. We're all anxious. We're all frightened. We're all in a peculiar extraordinary situation. So, be aware whether you are trying to soothe yourself in an unhealthy way."

Baldwin accepts these are difficult times for people to date, but she doesn’t advise putting a pause on online dating entirely.

“There's a real opportunity here to proceed slowly — to date slowly, mindfully, consciously, intentionally. And you know, we might be here for a while. So, don't sort of let it spiral out of control before you've actually got to know this person.”

“The best thing we can do is really take care of ourselves when we're dating. Take care of our imaginations so they don't run wild. There's a real opportunity here to proceed slowly — to date slowly, mindfully, consciously, intentionally,” she said. “And you know, we might be here for a while. So, don't sort of let it spiral out of control before you've actually got to know this person.”

But daters are trying to be inventive. Lots of dates are happening over dinner and a bottle of wine — on FaceTime. Others are watching movies together — but in separate apartments.

And then there are those like 33-year-old Kellyn Bechtold in Spain, who has taken dating during the pandemic to a whole new level. Bechtold, a career coach originally from Indiana, was traveling through Asia when the coronavirus first struck. She moved to Madrid  thinking she’d be safer in Europe.

While taking a few days off in Malaga, in southern Spain, Bechtold met an Italian man on the dating app Bumble. They hit it off. 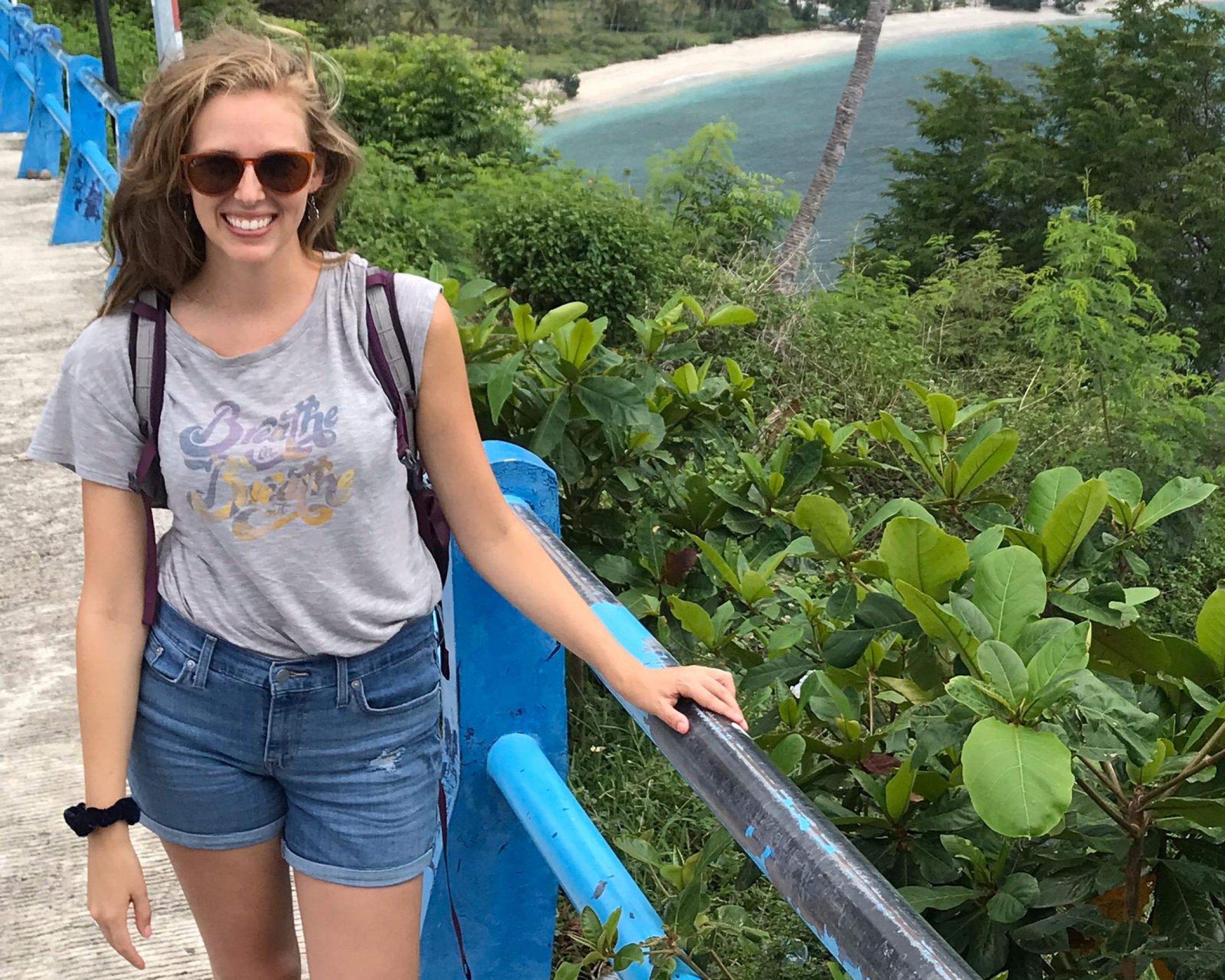 Kellyn Bechtold is quarantined with a man she met in Spain.

“March 7 was our first date, and we went on a 12-hour date. We met at 1 p.m. in the afternoon and then had beers and ended up out dancing and accidentally crashing a bachelor and bachelorette party. We really just had a fun time,” she said.

A couple of days later, they met again for dinner. But the next morning, Bechtold got a frantic text from a friend in Madrid.

“It said: You either need to get to Madrid now or it's unlikely that you'll be able to get here.”

She told her new Italian date that she would have to return to Madrid that day, but he would have none of it.

“This guy, Mr. X, was like, ‘What are you doing? Like what do you mean? You're going to go to Madrid? Like, it's literally the next epicenter.’”

Mr. X, as Bechtold calls him, asked her to move in with him that day. Then Malaga went into lockdown. The pair has been living together for more than three weeks now, unable to leave except to go to the supermarket or pharmacy. Bechtold is sanguine about the experience.

“The world feels like it's contracting, and we get to expand what it means to really care for another human being. It’s like a social experiment and one where I've found I've been able to exercise parts of my heart that I've never exercised before. And it's really lovely.”

“The world feels like it's contracting, and we get to expand what it means to really care for another human being,” she said. “It’s like a social experiment and one where I've found I've been able to exercise parts of my heart that I've never exercised before. And it's really lovely.”

Bechtold doesn’t know what will happen with Mr. X  after the lockdown is lifted. And she says he refuses to talk about the future when they’re not together 24/7.

Katie Bock, 32, an academic in Arizona, thought she knew exactly where her relationship was headed. Bock was due to marry her fiancé, Scott Davis, 35, April 25 in the Japanese Friendship Garden in Phoenix. But in the last few weeks, guests began to call to say they were worried they wouldn’t make it.

Davis, a leasing consultant, says most of his friends and family are on the East Coast, and they were the first ones to start sounding the alarm. 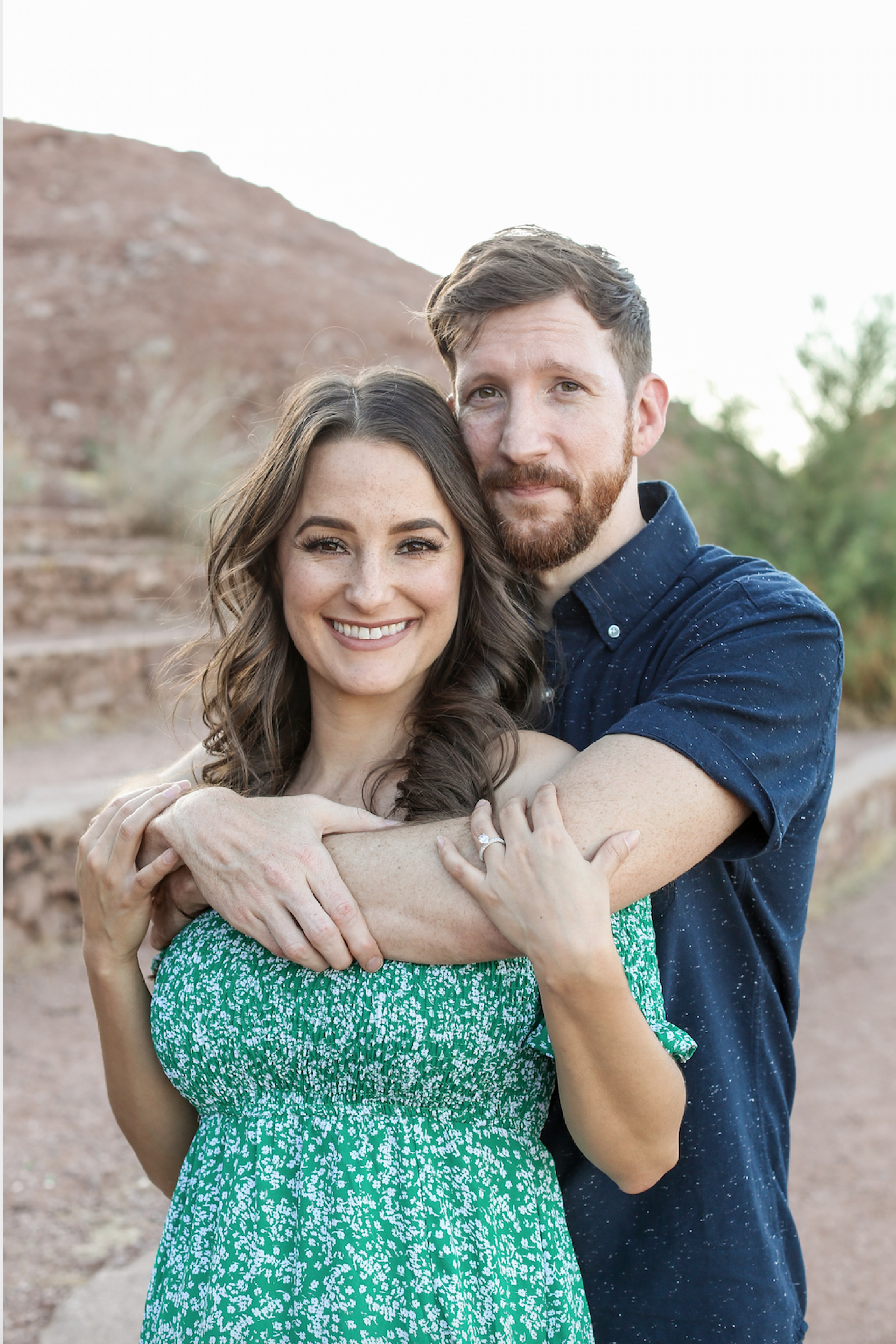 Katie Bock and Scott Davis of Arizona postponed their wedding until later this year as a result of the COVID-19 pandemic.

Photos by Ashley Freehan and edited by George Street Photography

“I had family right off the bat that let me know that they wouldn't be attending which, you know, I totally understand. And then we just started to get a series of different messages asking, ‘Hey, is this still happening? Because things are getting weird here,’” Davis said.

Bock also worried about putting her 90-year-old grandmother at risk.

“We're really close to her. I didn't want to put her in any position where she couldn't be there. But also if she was there, she was going to risk her life,” she said.

By mid-March, Bock says she realized the wedding couldn’t go ahead.

“I had somewhat of a breakdown. I talked to my older sister about it. It was sad. A few days later, I decided, you know what, it would just not be a happy time with all that's going on.”

“I had somewhat of a breakdown. I talked to my older sister about it. It was sad. A few days later, I decided, you know what, it would just not be a happy time with all that's going on,” she said.

They postponed the wedding until November and now plan to have their honeymoon in Costa Rica in December.

British couple Lauren Holden, 35, and Gary Cripps, 32, took a different gamble. Holden, a freelance copywriter from Lancaster in the UK, was due to get married on March 21. As the date approached, the couple worried about whether it would be allowed to go ahead and if it would be too risky for their guests. With one week to go, Cripps suggested they move up the date.

The couple had 48 hours to rearrange the wedding registrar, call the suppliers and contact all the guests. They reduced their guest list from 91 to 20.

“It was parents and sisters and brothers and bridesmaids, a couple of aunties, and that was it really," she said. "A lot of people were feeling quite devastated for us, ringing us up, saying, 'We're really sorry you've had to do this.' But we just thought, 'Bloomin’ heck.' We've been really fortunate there.”

Their wedding was the last one to be held in Lancaster town hall in March.

Holden says they could have postponed the whole ceremony, but the couple wants to start a family. They are planning on holding a wedding party for all the guests next year on their one-year anniversary. The newlyweds have been in isolation ever since. Holden says she’s quite enjoying it.

“It's actually been quite nice, really, as daft as it sounds," she said. "Social distancing and just being us two. Yeah, I thought we’d be tearing each other's hair out by now, but it's been alright.”

Perhaps a quarantine is the perfect test for a relationship.