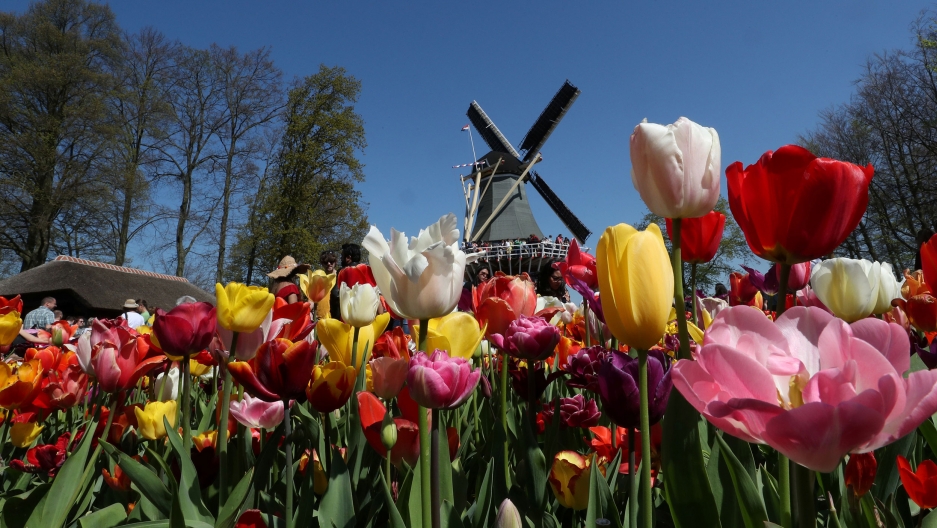 A windmill is seen in the Keukenhof garden in Lisse, Netherlands April 19, 2019.

Stress and anxiety are part of living through a pandemic. One way to relieve the pent up frustration? Cursing. Studies suggest that there are mind-body benefits to letting those curse words fly.

In English, many swear words and phrases are linked to sex and religion. But in the Dutch language, many profanities and expletives are derived from disease. In the Netherlands, you might tell someone you really dislike to optyfen or "typhus off." Some hypotheses suggest that profane tradition has its roots in 16th century Protestantism.

Martin van der Meulen is a Dutch linguist and the coauthor of the book "Het Groot Nederlands Vloekboek, which roughly translates as "The Big Dutch Book of Swearing." Meulen spoke to The World's Marco Werman about how disease vocabulary found its way into Dutch curses.

Marco Werman: Martin, give us some other examples of Dutch profanities or expletives that are rooted in disease.

Marten van der Meulen: If you stub your toe, for example, you can say anything from kanker, so that's cancer, to tering, so that's tuberculosis, I think. And we even see a little bit of corona coming in nowadays.

Related: Why you'll find people named Lenin, Stalin and Krushchev on the roads of Kerala, India

In what context have you already heard the Dutch word for corona or coronavirus? How would somebody use it?

So there's a construction in Dutch, which is, krijg de and then the disease. So that's roughly translated as "I hope you get" this or that disease. And I've seen it on on Twitter, that eternal cesspool. Yeah. People use it.

So how did this happen? What's the history?

So there are a few hypotheses about this. The baseline is that we don't really know because we have very little, very few sources dating back to the 15th, 16th century where people actually use swear words. But what we think at the moment is that it's related to the rise of Calvinism, a type of Protestantism, where the focus of people's lives shifted from living for the afterlife to living for the life now. And that, of course, led to diminish in strength of "God damn." Because, of course, the damnation is for the afterlife. And they turn to disease.

How common, though, are these disease-curse phrases today in the Netherlands?

So especially in the western parts of the Netherlands — so that's the urbanized Amsterdam, The Hague, Rotterdam, mostly — there is relatively widespread, especially among younger males. Outside of these areas, it seems to be less in use. It's important to stress at this point, although it's used in Dutch, it's definitely an element that's only used in the Netherlands. So in Belgium and in Flanders, where Dutch is also spoken, this is unheard of to use any disease curse word.

Related: Where does language come from?

The English language used to have words or expressions linked to disease. There is Shakespeare's "a pox on both your houses," but no one would say that today. I know you're a Dutch linguist, but do you know when the English language shifted its swear words from disease themes to sex and religion?

I'm not very well-versed in my Shakespearian curse words. But what I would say is that it's not just Dutch that has expressions using diseases. There are other languages that also have these disease expressions — for example, Thai and Korean and Polish and Danish. But the difference is just the sheer amount. So in Dutch we have such a rich cursing vocabulary than most other languages. I think it may have been the case that — especially with plague — this may have been one of those words that was used more widely next to other words.

Related: When an American says 'sure' to a Brit, does it mean yes or no?

What is your favorite Dutch expletive?

When I was writing the book, we also looked into some plant names that are used as expletives. And actually plant names in Dutch are very useful for this. So what you want from a curse is a few plosive sounds, right? So p, t, and k. And there's a kind of tulip, it's roughly translated as a forest tulip — very fitting of course for Dutch — which is pronounced bostulp.

How would you use it in a sentence?

You can say it toward someone. So, you can say that someone's an idiot, for example. So, you're such a bostulp, although as far as I'm aware, I'm the only one using it so far.