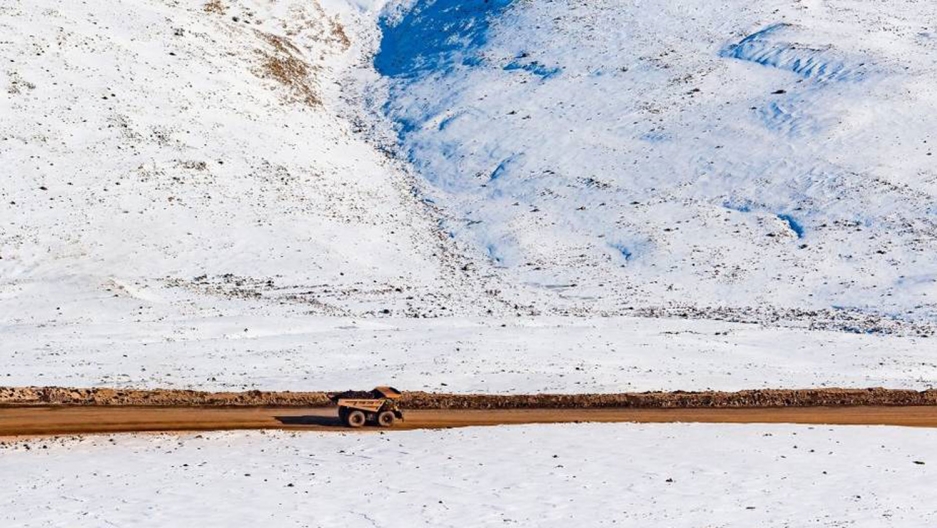 A truck carries ore excavated from the Mary River iron mine across the frozen landscape of Canada's Baffin Island. Baffinland Iron Mines Corp. wants to more than quadruple the mine's production, starting in 2025.

Even 150 miles away from the Mary River iron mine, Peter Ivalu can't seem to escape its presence.

He's heard rumors of white foxes turning pink, and caribou, walrus and narwhal disappearing from traditional Inuit hunting grounds. Last year, he noticed something bizarre at his family campground just south of Igloolik, a hamlet in the far northern Canadian province of Nunavut, where he lives.

"We've gone down to that camp every spring since I can remember," he said. "Last spring was the very first time we noticed red patches on the snow."

It was iron dust from the Mary River mine, Ivalu said. "That dust is now everywhere."

Operating since 2015, the mine produces up to 6 million metric tons of iron ore each year that then gets shipped from the frozen coasts of Canada's Baffin Island, almost 1,400 miles north of Montreal, to parts of Europe and Asia.

For a decade, Ivalu and other Inuit community members in the region have fought the mine's development, worried about what excavating and shipping millions of tons of iron ore each year might do to one of the world's most fragile ecosystems. Already, the Arctic is warming twice as fast as the rest of the planet, melting sea ice at alarming rates, causing mass die-offs of fish and birds and altering wildlife migration habits. 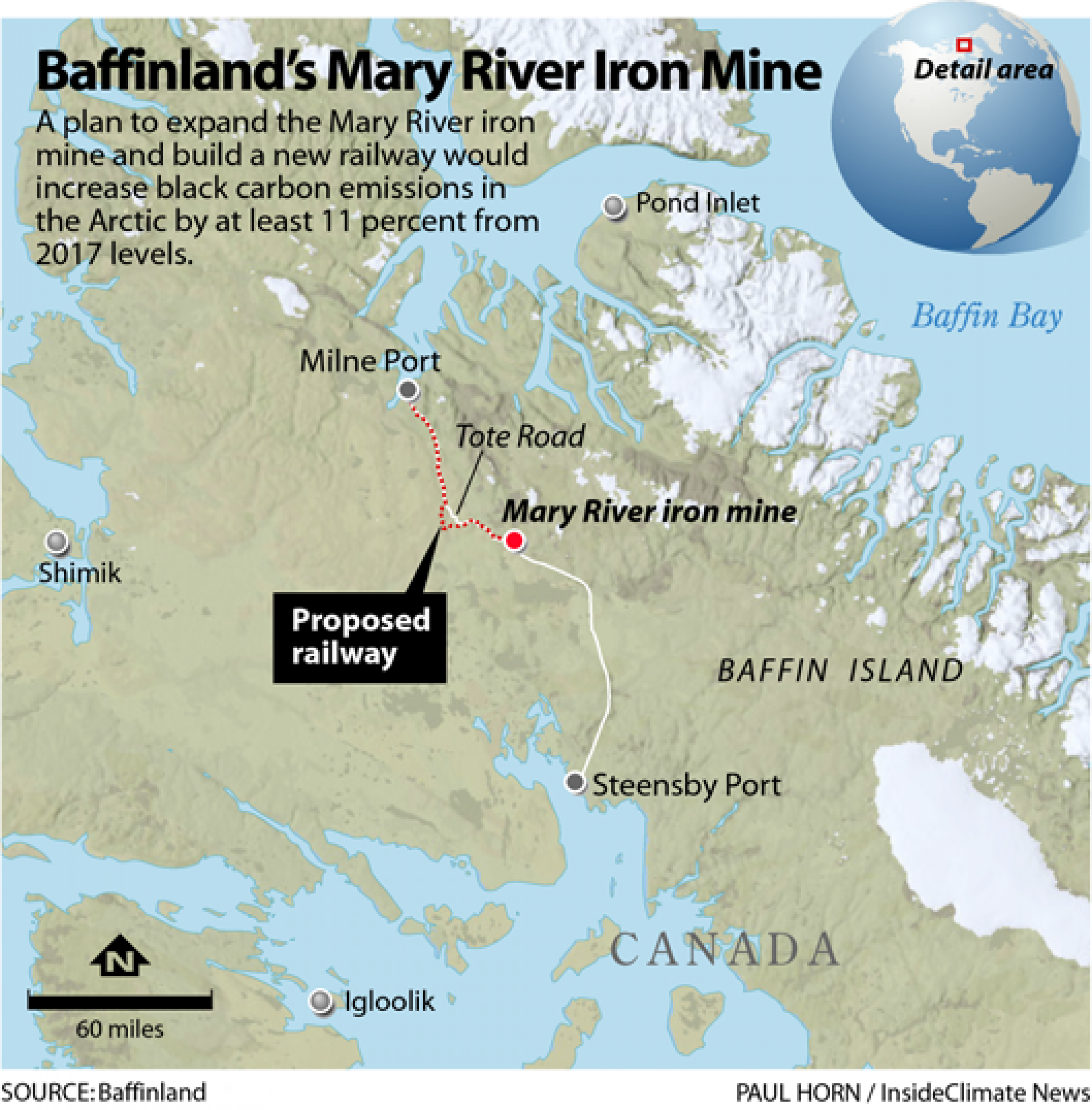 Now, Baffinland Iron Mines Corporation, which owns the mine, wants to expand the operation by doubling its output to 12 million metric tons a year, and, starting in 2025, more than doubling that again to 30 million metric tons. That means two to four times as many ships carrying the ore through the icy waters, as well as the construction of a new rail line that would carry the ore about 62 miles north of the mine to a port in Milne Inlet. It also means more greenhouse gas emissions — and especially an increase in a climate-warming pollutant that scientists warn is particularly devastating for the Arctic: black carbon.

In 2017, there were 574 metric tons of black carbon documented in the Canadian Arctic, with shipping contributing 41.5 metric tons of that, according to Environment and Climate Change Canada, a federal agency.

Black carbon, or soot, comes from burning fossil fuels or biomass — like wood — and is gram for gram 100 to 2,000 times more powerful in warming the atmosphere than carbon dioxide. And while it doesn't stay in the atmosphere nearly as long as CO2 (weeks versus thousands of years), black carbon can do a lot of damage. The dark soot warms the atmosphere by absorbing sunlight, then covers snow and ice when it falls and speeds up melting.

Black carbon is particularly damaging to the Arctic because it also contributes to "positive feedback loops" that exponentially contribute to warming, said Mark Jacobson, an atmospheric scientist who researches air pollution and climate change at Stanford University. By warming the ground more than the atmosphere above it, it creates stagnant pockets of air which in turn lead to less wind to dilute pollution, he said, while also reducing the reflective property of ice and snow, known as the albedo effect.

Baffinland Iron Mines Corporation argues that expanding the Mary River mine will ensure the company can remain financially viable. Economically, Baffinland says, the mine will benefit both Inuit communities and the Canadian government through hundreds of new jobs and billions of dollars in royalties and other payments by the end of the mine's lifetime.

The company has argued it can operate the mine while also mitigating its environmental consequences. At a trade show in February, Baffinland CEO Brian Penney reassured concerned attendees. "If we can't do it safely, we won't do it. If we can't protect the environment in our development, we won't do it," he said.

But several environmental groups and government agencies remain skeptical of that promise, pointing to holes in the information Baffinland provided at public hearings last November and what some environmentalists say is a total lack of a climate mitigation plan for the project.

In a letter to the Nunavut Impact Review Board, Nunavut's environmental assessment agency, Environment and Climate Change Canada wrote that it didn't agree with Baffinland's claim that its black carbon emissions after expanding the mine would have no "significant adverse effect on the Arctic environment." 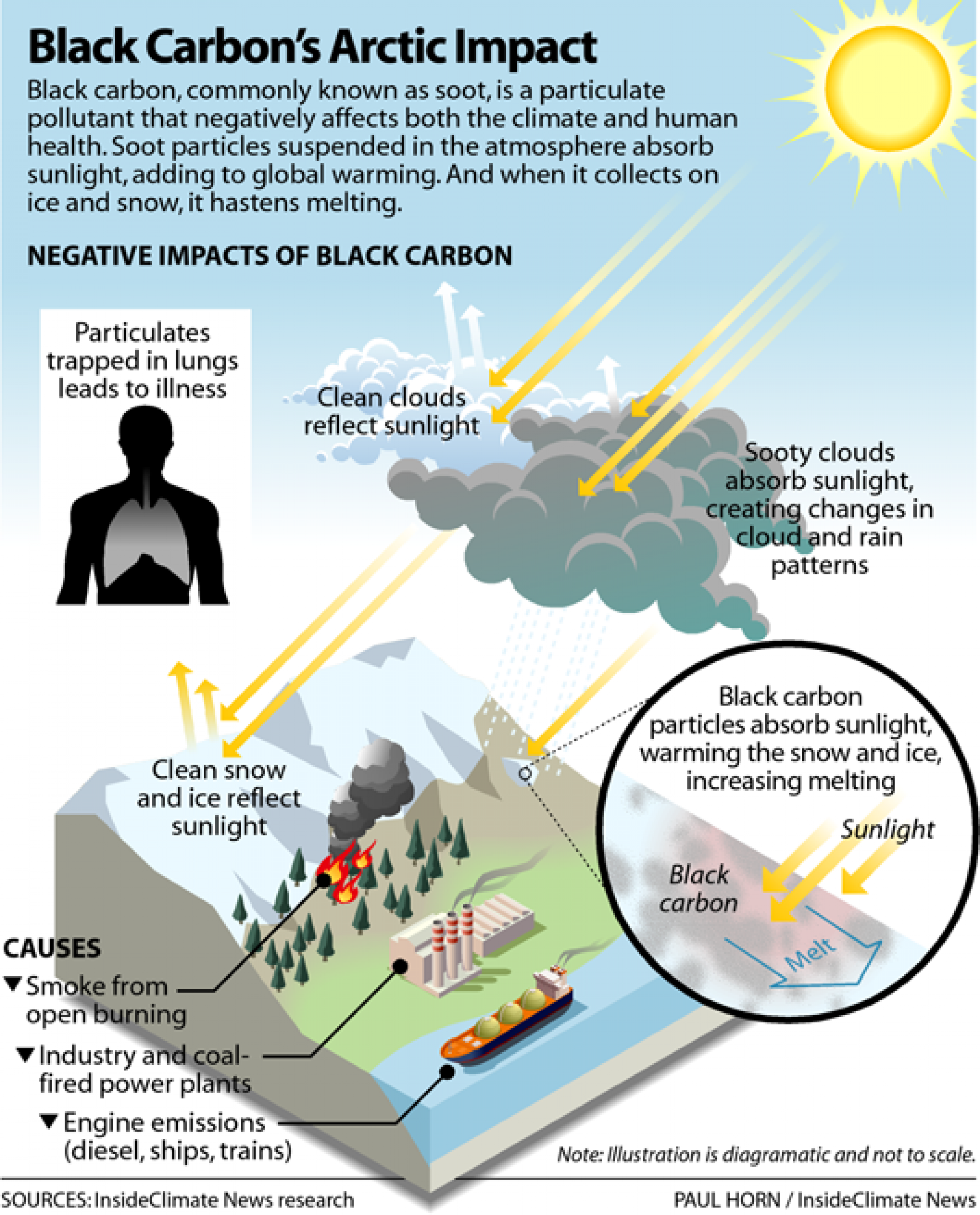 Baffinland has "not provided the analysis or any other information that demonstrates the validity of these conclusions," Environment and Climate Change Canada continued in the letter, noting that its conclusion that the company's black carbon emission estimates were understated.

Andrew Dumbrille, who specializes in marine shipping policy for the conservation group World Wildlife Fund Canada, said it's not just black carbon that Baffinland is failing to address. The company lacks any kind of emissions reduction goals at all, he said.

"This is the biggest development in the history of the Canadian Arctic. And to not have a climate emissions plan is just not acceptable."

"This is the biggest development in the history of the Canadian Arctic," Dumbrille said. "And to not have a climate emissions plan is just not acceptable."

A draft document labeled "Climate Action Plan" that was uploaded to the Nunavut Impact Review Board public registry last year states that Baffinland is looking into different ways to reduce greenhouse gas emissions and develop climate adaptation strategies, but lists no specific actions the company has committed to taking.

In an email, Baffinland said that its operations already use less energy than other bulk iron ore providers because the high quality of its ore means less processing. The company also said by transporting the ore to ships by train instead of truck, it will further reduce its overall energy consumption by an estimated 10.3% by the end of the mine's life.

"We are revising our existing climate change strategy to better define our priorities and approach related to greenhouse gas emissions management, the anticipated impacts of climate change on our operations, and how Baffinland will work with Nunavummiut to adapt to climate changes in the North," the company wrote, referring to people who live in Nunavut.

Baffinland submitted updated environmental assessment documents in January, after a public hearing in November was postponed due to a lack of technical answers. Ryan Barry, executive director of the Nunavut Impact Review Board, said the board was "in the final stretch of the assessment," and it will submit a recommendation to the Canadian government sometime this year.

"We've just had to reschedule some of these meetings, postpone them indefinitely because of the ongoing COVID-19 pandemic," he said.

One way for Baffinland to reduce its climate-warming emissions would be to change its shipping fuel. Currently, the shipping company contracted by Baffinland uses heavy fuel oil, or HFO, a viscous, tar-like oil that's long been used by the shipping industry because it's widely available and cheap.

But the fuel is also among the dirtiest of the fossil fuels, and there are much cleaner alternatives readily available today, like distillate fuel, said Dumbrille of WWF Canada. "One of the things we say to Baffinland is to reduce your carbon emissions overnight, switch from HFO to distillate," he said. "It's low-hanging fruit."

About half the greenhouse gas emissions Baffinland's Mary River iron mine produces comes from transporting the ore, according to the company's estimates. And most of those transportation-related emissions come from shipping.

For years, the United Nations' International Maritime Organization (IMO) has been trying to get the industry to move to cleaner, less environmentally harmful fuels, such as distillate, and has even considered banning the use of HFO in the Arctic. Major international shippers such as Maersk have pledged to become carbon-neutral by 2050 by transitioning to lower-carbon and eventually zero-carbon fuels.

In January, the IMO implemented a new regulation aimed at curbing the environmental and health impacts from burning sulfur-rich fuels in ships by requiring the industry to use fuel that contains only 0.5% sulfur.

Sulfur oxides — the result of burning HFO and other high-sulfur fuels — are harmful to the environment, but they aren't greenhouse gases. In its report to Nunavut's environment assessment board, Environment and Climate Change Canada also noted that the new sulfur limit won't affect black carbon emissions.

When asked if Baffinland was considering switching from HFO to distillate fuel, the company said it would "comply with all applicable shipping regulations, including those established to reduce emissions."

To Peter Ivalu of Igloolik, the royalties and high-paying jobs that Baffinland says will come with the mine's expansion still aren't worth the trade-off. "Sure, jobs and training Inuit for highly skilled positions will definitely benefit my people," Ivalu said. "However, this would be at the cost of losing our traditional way of life."

InsideClimate News is a nonprofit, independent news organization that covers climate, energy and the environment. Sign up for the ICN newsletter here.