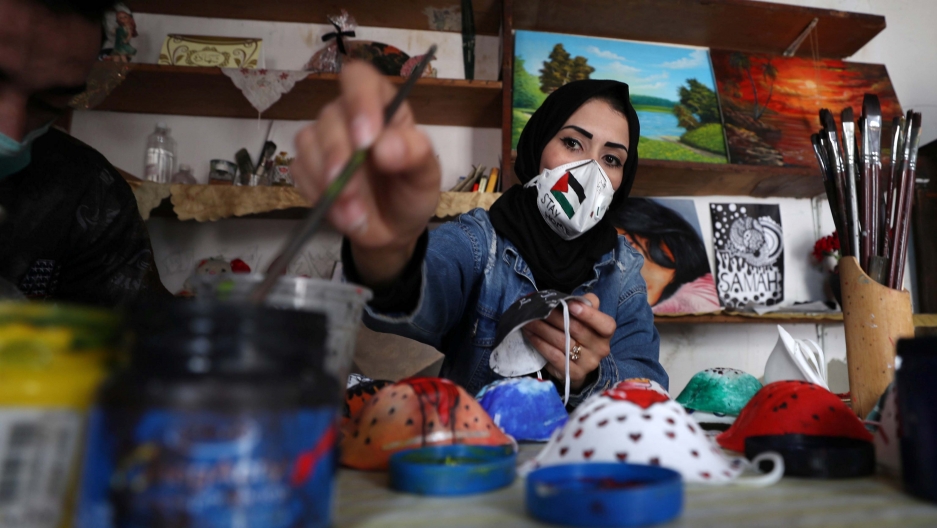 A Palestinian artist paints protective face masks to encourage people to wear them as a precaution against the coronavirus disease (COVID-19), in Gaza City, March 30, 2020.

In the Gaza Strip, roughly 2 million Palestinians are squeezed into a small, densely-populated territory, where social distance is difficult to practice. Add smokers, high rates of obesity and stress-related disorders, and Gaza’s population appears especially vulnerable to the coronavirus.

With at least 10 coronavirus cases already confirmed in the Gaza Strip, hospitals that were once overwhelmed by patients' gunshot wounds and amputations from clashes with the Israeli military are now gearing up for a very different challenge in the coastal enclave, where many people live in refugee camps.

A new quarantine center has been set up in Rafah, near the border with Egypt, and the 452-square-foot tents donated by the World Health Organization that once served as border Trauma Stabilization Points have been moved to tackle the new threat.

Dr. Yehia Abed is an epidemiologist in Gaza who teaches public health at al-Quds University in Jerusalem. He told The World's host Marco Werman that even though the number of reported cases there is low, he’s worried that conditions in Gaza will allow the coronavirus to spread quickly.

Marco Werman: Doctor, how worried are you that those cases in Gaza will explode and grow like in many other places around the world?

Dr. Yehia Abed: In reality, I'm worried because the 10 cases which we detected are asymptomatic: no fever, no cough. And that will make me worry that there are other asymptomatic cases among the population. Gaza Strip is one of the [most] highly dense areas in the world. In this case, the hazards of the spread of the infection will be dangerous in the Gaza Strip.

Right. And Gaza is suffering from a severe shortage of medical equipment. Only 60 ventilators for roughly 2 million people. So how are local health officials hoping to contain the spread of the coronavirus and keep it from overwhelming, as you say, this very densely populated territory and an already shattered health system?

Suppose that — and I hope not — suppose that the infection is spread in Gaza. The system only could deal with the weak system with mild cases only, but not with severe cases.

Related: Combat in the world's biggest conflict areas not slowing down despite COVID-19

If you and other medical professionals are unable to treat the most severe cases, will you just turn them away?

Listen — look at the experience of Italy. What's happened there in Italy? Why [did] the mortality rate in Italy jump up? More than 10% case-fatality there, not because the Italian health system is weak, no. Simply because the Italian health care system could not cope with the number of cases that are coming in one time. And this is the most worrying thing for me as a Palestinian here in Gaza. I hope that what's happened in Italy is not repeated here in Gaza.

We hope the same for you. When we're talking about medical supplies and what the health system in Gaza needs to handle an outbreak of COVID-19, how are Gaza's needs different from other places?

In Gaza, it seems to me that no large difference than what is going on in the [rest of the] world. It seems to me that we have good staff, we have good experts who could work. In reality, they are deprived of the facilities to conduct excellent work inside Gaza. People are committed to their work. And I am looking [to] the world [to] look [at] this blocked area that [has] suffered in the last 14 years from a continuous siege to support the conditions of 2 million people [who] are suffering nowadays in Gaza.

How does the blockade affect Gaza's ability to respond to the coronavirus?

It has positive and negative effects. The positive effect is that the blockade didn't give the chance for people to come from outside of Gaza. We have a limited number of people who come to Gaza. And this is a positive effect of the blockade. But the negative effect is that a blockade prevents Gaza from developing its health care system, from having their essential needs, from the passing of equipment, and so on, to the population here. We are suffering in this system, not just during the coronavirus time. We are suffering in the last 14 years.