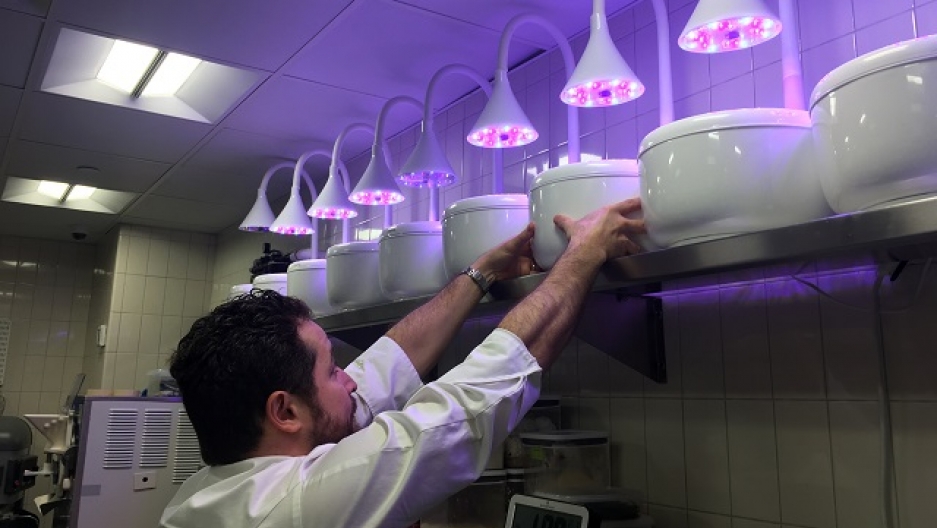 It is late morning, and everyone is super busy in the prep kitchen of Crown Shy, getting meals ready before the lunch time rush. There are incredibly delicious smells emanating from the kitchen of this New York City restaurant, including the aroma of baking bread.

But it is what is happening up on a long shelf above the pastry ingredients that really grabs your attention. Tiny seedlings are growing in large pots, under a haze of purple, green and white LED lights.

“We essentially are starting the cycle for chervil so they’re all at a very young stage and these basically just germinated,” said James Kent, the chef of Crown Shy.

Kent, a native New Yorker, has grown all sorts of things in the windowless kitchen of his restaurant, just steps away from Wall Street.

“We did peppers, we’ve done tomatoes. For us the flowering and fruiting things, [are] harder to time with the restaurant,” he explained.

In the midst of a city he describes as a concrete jungle, Kent has what amounts to a small indoor garden in which he can grow produce year-round, without soil or sunlight. It is all thanks to a high-tech automated system developed by entrepreneur and inventor Jennifer Farah, who said she was sick and tired of the taste of store-bought tomatoes.

“I’d go to the grocery store and we’d get tomatoes and they were like mealy and gross tasting,” she recalled.

Those tomatoes were a far cry from what she ate as a kid.

“I mean, I grew up outside of Detroit. I had a garden in my backyard. We would grow tomatoes during the summer, and they were like amazing tomatoes,” she said. “And for me that’s like what the tomato was, and what the taste of a tomato was.” 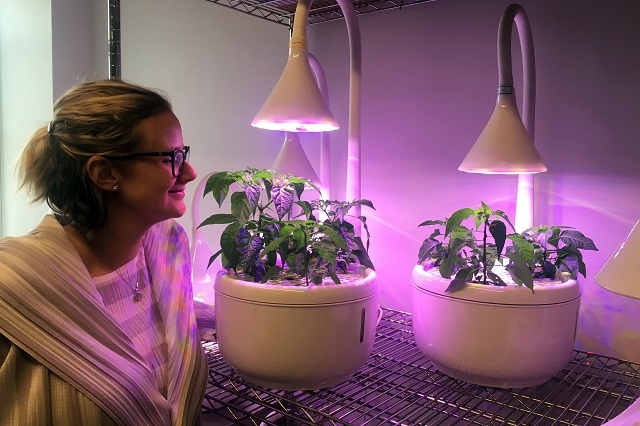 Jennifer Farah, co-founder and CEO of the start-up SproutsIO, at the company’s office in Cambridge, Massachusetts.

Farah is the co-founder and CEO of a start-up called SproutsIO. At the company’s office in Cambridge, Massachusetts, she explained how the system works.

“Part of the technology that we developed is what we call hybrid hydroculture. So, it’s actually a mixture between hydroponic growing and aeroponic growing,” she said. “Hydroponic is when the roots are fully submerged in water and nutrients, and aeroponic is when it's misted with water and nutrients. We do both because different plants actually require different needs and also at different stages of growth.”

Chef Kent has noticed a difference in the taste of the produce he has grown using Farah’s system, compared with what he typically buys for his restaurant.

“For me, it’s more about the freshness of the product, and that’s super important for the final taste,” he said. “Like, you cut off the plant, it’s crisp, it’s hydrated, it’s delicious. Whereas you buy a herb, you have to rehydrate it, you have to kind of doctor it up to get it to that point because it was flown in, and driven and handled and put in a fridge and sits in a fridge.”

If you sign up for the product, what you will get is a large round white planter which has a pole attached to it that rises up and arcs over it, like a street light. According to Farah, the system is highly efficient and needs only 2% of the water that is used with traditional growing.

You don’t need a green thumb, you don’t need any land, but you do need a mobile device and WiFi. These plants are under surveillance.

“You know, we can see camera imagery of your plants. We see sensor data about how your plants are growing, so we're continuously monitoring the plants,” Farah explained.

Besides a handful of professionals like Kent, SproutsIO also has around 120 customers who use the product in their homes, including Laia Mogas-Soldevila who most recently has been growing a Matchbox pepper plant in the living room of her small apartment.

Mogas-Soldevila, who studied with Farah at MIT, said growing veggies and herbs like basil has been a breeze and especially enjoyable for her young family.

“When we harvest it, normally my son cuts it with his little scissors, and he chops it. And then, of course, the baby is obsessed with basil and so she tries to eat it all the time,” she explained. “I’m not sure why she’s obsessed with these particular basil plants — not the basil that we buy at the shop but with these ones. I guess it has a special sweet taste and then a bit of bitterness. She’s quite addicted, actually.”

Mogas-Soldevila, originally from Barcelona, said her son even has a nickname for the growing system. He calls it “the light plant” or “la planta de luz.”

Farah’s “light plant” costs almost $800, but she said she expects the price to come down eventually.

Cary Mitchell, a professor of horticulture at Purdue University, said that while he is impressed with the SproutsIO system, he expects it will mostly appeal to consumers who have a “fairly large disposable income” — at least in its current form.

“It’s a convenience product. It’s for the young professionals who like to exercise and utilize their computer skills and their equipment and who don’t really have the time as a hobby to do a lot of growing themselves,” he added.

Mitchell sees Farah’s creation, along with other emerging in-home gardening products, as the natural progression of a relatively new approach to growing food.

“It’s completely in keeping with what we call the ‘indoor agriculture movement’ that’s going on in this country, indeed around the world,” he explained. “We’re moving from food production in the field to the greenhouse and, in more recent years, moving into repurposed warehouses, [with people] starting indoor vertical farms, especially in and around urban areas.”

What is driving this movement? It all comes back to those bad tasting store-bought tomatoes.

“There’s a real trend toward wanting to get away from long distance transportation for local production and to have fresh produce and to do it year-round, and the only way to do that locally is indoor,” Mitchell said.

The only problem is that controlled environment agriculture, as it is known, is still a young industry.

“It’s not mature, and for that reason they don’t have all of the answers for productivity and profitability and sustainability,” he said.

It may just be starting to bloom, but Mitchell explained that the movement is reaping the fruits of past research — including space programs that he has been involved with for decades. He pointed out that NASA was the first agency to investigate the use of LED lighting for plants.

Mitchell also recalled a scene in the movie, “The Martian” where Matt Damon’s character is stranded on Mars but manages to grow potatoes with the help of composted human waste.

Turns out, the storyline is not too far from reality.

“In fact, we’re already doing experiments on the International Space Station, and astronauts are picking and eating vegetables they are growing up there on a plant growth unit called Veggie,” he said.

Back on Earth, Mitchell said he does not think that traditional farming will be going away anytime soon, but he is excited about the important role he believes indoor growing will play in feeding the world’s rapidly-expanding population.

Increasing food production will not be enough to create food security though.

Julian Agyeman, professor of Urban and Environmental Policy and Planning at Tufts University, believes that, to maximize the impact of the indoor growing movement, entrepreneurs should do more to reach out to city-dwellers of all incomes and backgrounds.

“I think the innovators have really got to step outside their own niches, their own reference groups and really start talking to other people if they want their products to be appealing to a broader cross section of the public,” he said. “Until we move away from business-model social innovation to innovation that really centers social justice and equity, then we’re not going to move these innovations away from that small group of people.”

As for Farah, she dreams of her WiFi-equipped “light plant” being used “in every home in the world.” She wants everyone to have better tasting food and the experience of growing it, even in a concrete jungle.

Farah’s indoor growing system will be on display at Innovation Hub’s Wicked Smart exhibit at the Museum of Science, once it reopens.

Since this piece was reported, Crown Shy has stopped its regular services in an effort to stop the spread of COVID-19.