The game was scheduled to take place on March 21, 2020, in Berlin. But due to various restrictive measures taken in Germany to stem the spread of COVID-19, Dahlke’s lucky red jersey will remain in his closet for now.

National soccer officials have announced the recommendation to postpone all soccer games at least through April 30.

“The day all of the games were canceled, I was very sad and there was nobody in the Union family who felt differently.”

“I don’t feel very good without soccer, without Union and all of my friends,” said Dahlke, 53, who has been a Union fan since his father took him to his first game at the age of 7. “The day all of the games were canceled, I was very sad and there was nobody in the Union family who felt differently.”

When Dahlke went to his first Union game 46 years ago, today’s Germany did not exist. Union and Hertha were two teams in divided parts of what was once one Berlin. 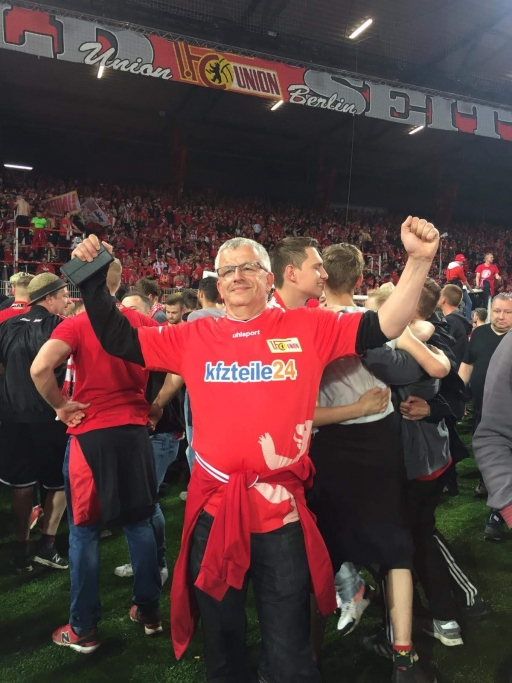 Uwe Dahkle, a Union superfan since the age of 7, wears a red jersey at a game.

Dahlke grew up in Köpenick, also home to Union's stadium: Stadion An Der Alten Försterei. Köpenick is a borough in southeast Berlin that used to belong to the German Democratic Republic (GDR), or communist East Germany, and was separated by the Berlin Wall from West Germany, known as the Federal Republic of Germany.

When the Allied powers defeated Germany after World War II, they created four occupation zones, and they also carved up Berlin, the capital. The United States, United Kingdom and France controlled what became West Germany, while the Soviet Union’s zone became East Germany in 1949.

Over the decades, so many East Germans fled to the free West that the communist regime built the Berlin Wall in 1961 to contain its population. That border separated people — and soccer teams, too.

“During the Cold War, the teams played in different soccer associations aligned with either East or West Germany,” said Per Urlaub, a professor at Middlebury College in Vermont who has written about the disparities between Germany’s eastern and western soccer teams that persist to this day.

“Just imagine in a big American city, like Los Angeles or New York, you have two sports teams, same sport, New York Giants against New York Jets, and they wouldn’t be playing against each other,” said Pascal Jochem, a sports journalist with German broadcaster Deutsche Welle.

On November 9, 1989, because of political changes and pressure from East German citizens, the Berlin Wall fell. Germany reunified in 1990, and that year, Union and Hertha played a friendly match against each other.

It would take three decades, though, before the two could play a competitive match in the Bundesliga, Germany’s major professional soccer association.

Why? Vastly different finances. After the Wall fell, teams from the former East, like Union, could use capitalism to their advantage like their western counterparts — but they had to figure out how to make it work.

Communist East Germany had focused its tight resources on elite athletes, like those who competed in the Olympics. It also supported soccer teams like BFC Dynamo, the team of the Stasi — the infamous East German secret police known for mass surveillance of its citizens and persecution of dissidents.

Union, on the other hand, wasn’t a team of the state.

“It was a club against the establishment,” Jochem said. “Real life was controlled, supervised by the Stasi. You had to be careful [about] what to say. In the stadium, they felt safer.”

Meanwhile, Hertha, in the wealthier West Germany, had money to spend on its team and was promoted to the Bundesliga in 1997.

In November 2019, Union played a Bundesliga match against Hertha — and won 1 to 0, after striker Sebastian Polter converted a penalty in the 87th minute.

Union fans broke out into cheering so loud it could be heard a mile from the stadium. 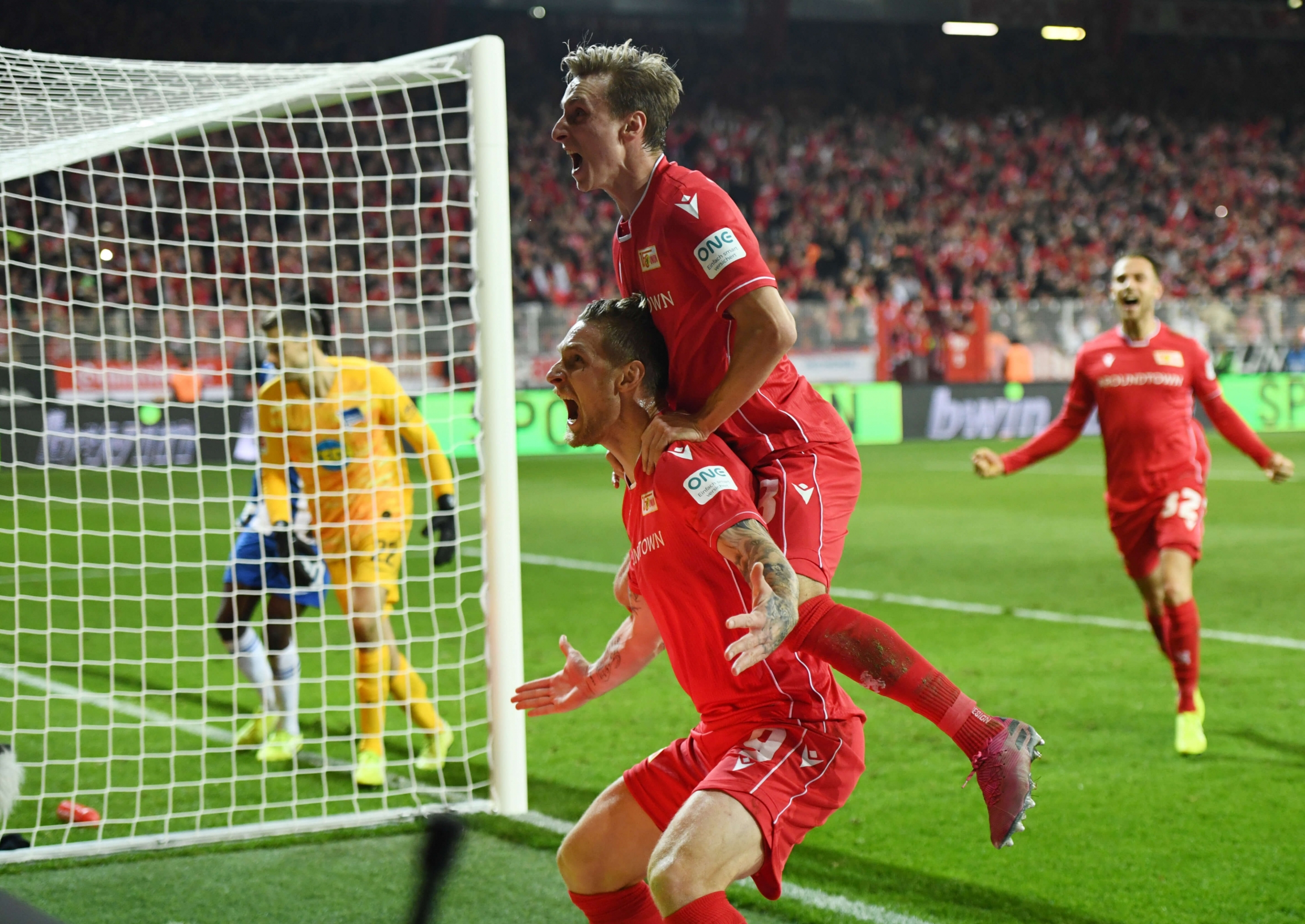 After the game, fans spilled into the streets singing Union songs and wearing red and white, the team’s colors.

One superfan, Mirko Denda, 47, didn’t get home until 4:30 a.m. the next morning. Years ago, on his way to a Union game, his son lost a tooth as they stood on the platform of the S-Bahn, a public transit system in Berlin. Another Union fan nearby witnessed this and became ecstatic.

“[He] goes down on his knees and says, ‘Oh! God is showing us we will win today!’” Denda said, laughing. The white tooth had some blood on it — the red and white colors of the team.“My son thinks until now he was the reason why we won then.”

Teams in the Bundesliga play each other twice — once in each team’s stadium. Hertha’s is called Olympiastadion, built by Nazi Germany for the 1936 Olympics in a well-to-do part of western Berlin called Charlottenburg.

That’s where the March 21 game would’ve taken place. All 74,000 seats of the Olympia Stadium were sold out, just as the November match at Union Köpenick stadium sold out, too.

These two matches have been the talk of the town because of Union’s unusual history.

Fans give their blood for the team

Union has long been an underdog, and that’s what people like about the team. “They’re like the cool kids of Berlin, and Hertha Berlin is like the boring, established team,” Jochem said.

Union doesn’t have big investors, and compared to other clubs, it keeps sponsorships small.

“They would rather die than have anybody else take over control over their club."

“They would rather die than have anybody else take over control over their club,” said Tim Tschauder, a project manager with KÜHN Sportconsulting, which organizes tournaments in Germany involving ex-pro players who’ve retired.

Because Union doesn’t have a big stockpile of cash, its fans are known for finding ways to raise money for the team, or helping Union avoid spending it.

In 2004, the German Football Association demanded $1,586,085 from Union for the team to keep its license to play in the regional league. Germany compensates people for donating blood, so Union’s fans launched the “Bleed for Union” campaign in which they donated the money they received for their blood to Union.

He and his wife took 24 vacation days off from work and spent 10 to 12 hours a day in the summer and again in winter to help renovate the stadium.

“[Fans] see it as their own club, not a team they’re going to watch,” Jochem said. “The stadium is their living room. That’s how they call it.”

Each year before Christmas Eve, fans gather inside the stadium not to watch a game, but to light candles and sing together, in what they call the Union Weihnachtssingen, or carol service.

During last November’s match, though, the mood inside Union’s stadium got tense. At one point, fireworks were thrown onto the pitch from the Hertha section and almost hit some players, temporarily interrupting the game. Later Union fans wanted to storm the soccer field.

“Although they don't really have a huge rivalry because of the Cold War, it feels like they're inventing it now,” Jochem said.

While this type of friction is typical between teams of other European cities, it’s not in Berlin.

“It’s funny that now you have these derbies with tension, without any historical reason behind it,” Tschauder said. “Normally you have that 100 years of enemies like the Scottish football clubs — Celtic and the Rangers in Glasgow, but in Berlin you didn’t have it at all.”

The way fans feel about these two teams depends on whether they lived in a divided Germany or not.

“Fans my age can still have friendships with Hertha fans that were made at games before 1989, whether secretly abroad like in Prague or at games in Köpenick,” Dahlke said. “Fans between 20 and 30 years old see Hertha today as city rivals and clearly show their dislike of the club from Charlottenburg.”

“I never saw it that the sides would turn,” Tschauder said. “Hertha is really on the edge. They have troubled waters right now.” 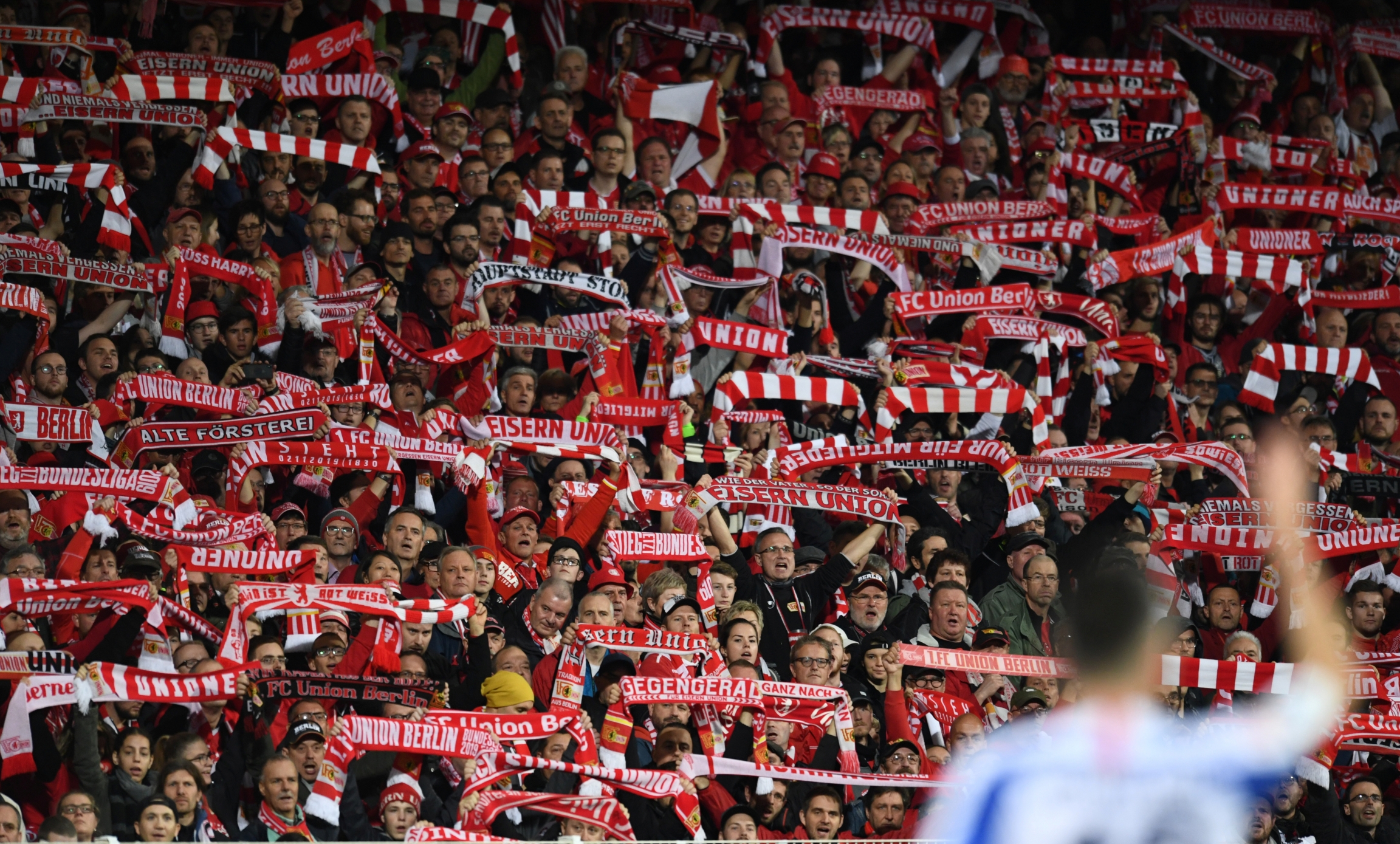 Now, fans on both sides share a common trouble — COVID-19. Dahlke knows what he and fellow Union fans will do.

"We will proudly support the team with jerseys and scarves, and we’ll donate money so that those who are not doing so well due to the [COVID-19] crisis can go back to the stadium..."

"We will proudly support the team with jerseys and scarves, and we’ll donate money so that those who are not doing so well due to the crisis can go back to the stadium,” he said. “If the club needs help, whether painting the fence or sweeping leaves, there will be many people who will participate. We have survived all situations together, whether in the GDR or after the fall of the Wall.”

He says they’re now even more excited than they were before.

“The Eisern Union [anthem] will be ringing through the Alte Försterei Stadium in Köpenick,” Dahlke added. “It will be heard twice as loud in the city. The fans will celebrate our club for days.”