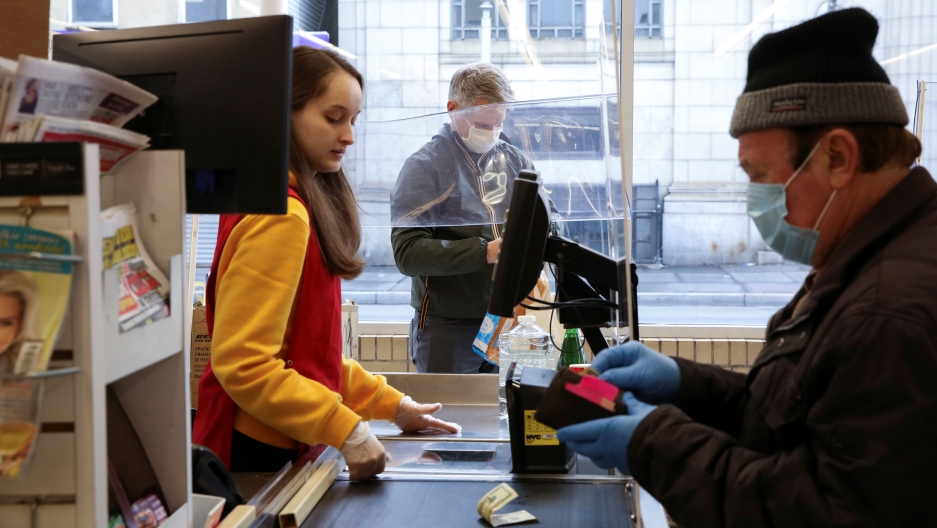 Doug Hassebroek packs groceries separated from the cashier by a plastic sheet installed during the outbreak of coronavirus disease (COVID-19) in Brooklyn, New York, March 25, 2020.

About a third of the world is on some sort of lockdown as governments scramble to reign in the spread of the novel coronavirus — and the list keeps growing. In many places, only essential businesses such as pharmacies and grocery stores are allowed to stay open.

The scenes inside grocery stores are anything but business as usual. Fights over toilet paper have been filmed and shared all over social media. Excessive stockpiling has left shelves empty. Lines have formed before stores open, stretching around the block.

Cathrine Jansson-Boyd, a consumer psychologist at Anglia Ruskin University in Cambridge, England, says stockpiling helps people feel they have some control in times of uncertainty — even when it is not necessary.

“You know you can’t control the virus. But what you can do something about is your shopping. You have full control over that. So by stockpiling, you feel like you’re taking charge. You’re doing something that somehow has meaning. When actually, of course, it doesn’t make sense.”

“You know you can’t control the virus. But what you can do something about is your shopping. You have full control over that," she said. "So by stockpiling, you feel like you’re taking charge. You’re doing something that somehow has meaning. When actually, of course, it doesn’t make sense.”

Related: How families around the world talk coronavirus with kids

Leaders around the world have promised their citizens that grocery stores are going to stay open, even in the places most impacted by the novel coronavirus pandemic, and some stores are putting limits on items to prevent hoarding.

But people are still making sure they have essentials on hand. What does “stocking up” look like for people around the world? 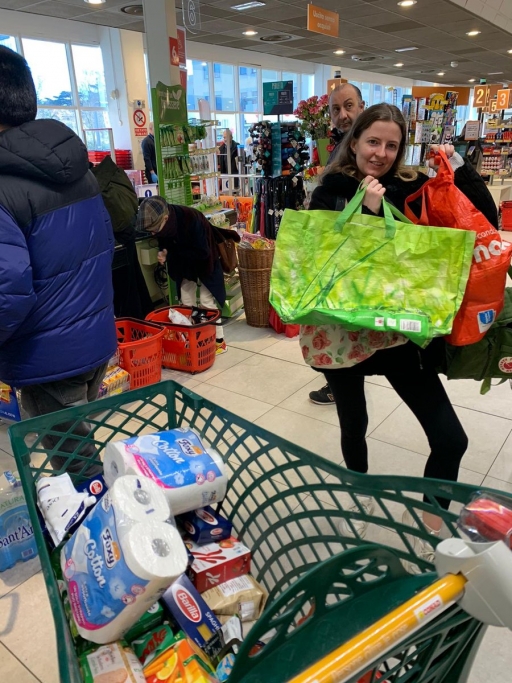 Immy Palmer, a UK citizen, has been quarantined for weeks with her roommate in Italy.

Samantha Slais is an American studying psychology in Brescia, Italy. She has been quarantined for weeks with her roommate, Immy Palmer, a UK citizen. At first, the pair thought the coronavirus and it’s quarantine orders were “a joke.”

“Back in Week 0, Week 1 — I don’t think we really believed how bad it was going to get,” Palmer said. “And we didn’t stock up that much on food.”

It took a concerned call from Slais’ father, who lives in Colorado, for the roommates to carefully consider their quarantine plans. Now, Palmer says going to the grocery store is a bizarre experience.

“They’re letting one person in, one person out at a time. Everyone is wearing masks, obviously. It’s really surreal,” she said, adding that the grocery store nearest them is “quite small” and is taking extra precaution to distance its customers at the checkout counters. “They’re just letting one person put their shopping on the conveyor belt, pay for their shopping, pack their bag, and leave before the next person can actually enter and put their shopping on the conveyor belt — so that there’s distance between people.”

Neighboring Austria faces a similar reality. Tanja Maier, who lives in Vienna, said on a recent trip to the grocery store, lines were like the “Christmas crowds times 10.”

“We talk about social distancing — I think about that trip to the grocery store and I think I was so stupid because we were pushing each other down the aisles,” Maier said.

With a family of six to feed, she has been stocking up for weeks. Her fridge, freezer, pantry, and an extra storage shed outside are full of non-perishable food.

“In the past, it was just for keeping beer cold. But now it has an actual purpose. So I can stock up, to a certain extent,” Maier said.

Maier used to live in Russia. Friends there tell her that buckwheat — a healthy, hearty grain like quinoa — is selling out in Moscow. Russia is also seeing a shortage of sour cream, Maier said.

“They put it on soup, they put it on pancakes, they put it on everything,” she said. “So it was really funny for me that in the store here in Vienna, we were out of other things like butter and stuff. But there was plenty of sour cream to be had.” 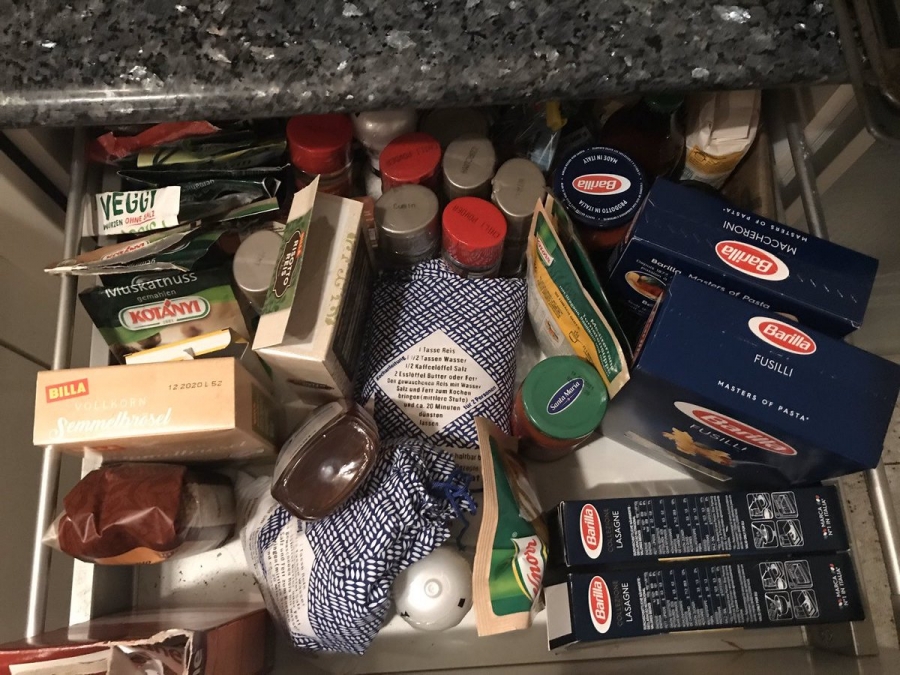 Tanja Maier, who lives in Vienna, says the grocery store lines are like the “Christmas crowds times 10.”

Reports out of Copenhagen say stores there are running out of yeast, matching up with millions of people around the world who are now baking more than ever.

Slais, in Italy, is among those bakers.

“I’ve been hand-making bread for the past three weeks,” she said. “And, like, cinnamon rolls and everything because I have nothing else better to do.”

The need to make your own bread and buy weeks worth of groceries is new and scary for a lot of people. But in Bismarck, North Dakota, Amalia Dillin said people are used to buying in bulk. North Dakota’s notorious winters often make it too cold to leave the house.

Dillin began stocking up weeks ago. She said the soup shelves are empty at the store, but the meat section is totally full because of the local hunting culture.

“There are definitely a lot of people here who have chest freezers full of meat,” Dillin said. “The venison and the antelope and the fish — like, [those people] are not going to be buying meat.”

But on the other side of the globe, people are stocking up on meat products. Hanrike Du Buisson lives in the North West province of South Africa and says people are buying biltong, a dried, cured meat that’s extremely popular in the country. Unlike bread, it can be hard to make at home.

People are also filling their carts with groceries that will make them feel better. The gelateria around the corner from Salis and Palmer’s apartment in Italy is offering delivery service. But for the two roommates, comfort food means a little taste of home.

“My grandparents are actually sending me a package that weighs eight kilos — so like 16 pounds — of just macaroni and cheese,” Slais said.

“We’re buying things that we think are going to help us feel that the isolation at home is a bit more bearable. Whatever it is you have a particular fondness of.”

“We’re buying things that we think are going to help us feel that the isolation at home is a bit more bearable. Whatever it is you have a particular fondness of,” she said. In a time of fear and unknowns, people want to feel like they’re in control, she added.

As for advice for people who are stocking up: Palmer, in Italy, says make sure you have enough tea. And in North Dakota, Dillin says: Remember the basics.

“Don’t forget seasonings and herbs,” she said. “Because you’re going to want to mix it up.”