Ida Ann Pedregó thought this spring, like many before it, would mark the busiest time of the year for her store. She owns Illusions Boutique, a party dress store in Douglas, Arizona, and she typically sees sales pick up in March, April and May ahead of the summer party season.

Not this year. As news of the novel coronavirus reached Pedregó’s hometown just north of the US-Mexico border this month, Mexican shoppers — who make up the majority of her clientele — slowly stopped arriving.

“It was in the atmosphere. People started to run scared. All you could hear was, ‘Do you think it’s really going to be this bad?’”

“It was in the atmosphere,” Pedregó said. “People started to run scared. All you could hear was, ‘Do you think it’s really going to be this bad?’” 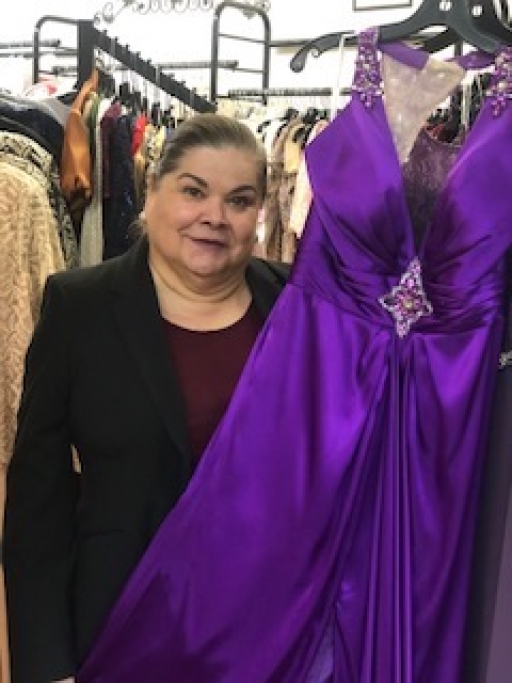 Ida Ann Pedregó poses with a dress at her boutique in Douglas, Arizona.

The economic shock of the new coronavirus has been felt especially hard along the US-Mexico border. An order by both countries’ governments last Friday has allowed through-traffic for commerce, but has barred many people who commute locally from one side of the border to the other — cutting off businesses like Pedregó’s from most of their customers.

The mostly rural, US border region depends on commerce from northern Mexico. Sales taxes collected from Mexican shoppers represent at least 40% of local US government revenues near the border, according to multiple estimates, said Erik Lee, director of the North American Research Partnership, a Phoenix-based think tank. Many cross the border to visit friends and family and shop at big-box retailers including Costco and Walmart or specialty shops like Pedregó's.

That revenue is critical in communities like Douglas, Arizona, where cross-border visitors spent as much as $95 million in 2016, according to a study conducted by the North American Research Partnership and the Crossborder Group. The new travel restrictions allow for medical or academic purposes, but block travel for sightseeing or recreation.

These measures are more dramatic than even the ones put in place after the 9/11 attacks or after the murder of Drug Enforcement Administration agent Kiki Camarena in central Mexico in 1985, Lee said.

“From the US perspective, these border crossings are absolutely essential for what are still frontier-border communities.”

“From the US perspective, these border crossings are absolutely essential for what are still frontier-border communities,” Lee said. “That just tells you how unusual and how serious this situation is.”

Government messaging in Mexico has been mixed. As late as last Sunday, Mexican President Andrés Manuel López Obrador encouraged citizens to go out and spend money. But many mayors and governors, including Gov. Claudia Pavlovich of Arizona’s neighboring state of Sonora have implemented measures in an effort to slow the spread of the disease.

Pavlovich declared a state of emergency on Wednesday, calling on businesses to close and allow workers to stay home. She had already ordered state beaches closed for a month — including through Holy Week, one of Mexico’s busiest travel holidays. And she had made multiple pleas to state residents, telling them that reducing social contact was the best way to slow down the spread of the disease.

“Let me reiterate and underscore: unless it is urgent, do not leave your home.”

“Let me reiterate and underscore,” she said in a video last weekend, “unless it is urgent, do not leave your home.”

Many in northern Mexico have stayed home following government recommendations — or simply because they don’t want to get sick. Pedregó shares those concerns.

Pedregó temporarily closed the business March 21, she said. And it was a difficult decision. Her mother opened the business on G Avenue in downtown Douglas, Arizona, in 1994, and she took it over eight years later. Illusions Boutique caters mostly to shoppers traveling from the neighboring state of Sonora looking for dresses, shoes and jewelry for weddings or teenage girls’ quinceañera birthday parties. When she closed, Pedregó had to tell her only employee, who’d been with the store for nine years, that there would be no more work.

“She pretty much knew,” Pedregó said. “Right now, the most important thing is the well-being of the community.”

If she looks back at the crisis after 9/11 and the recession of 2008, it helps her remain optimistic, Pedregó said. And whenever border activity returns to normal and local schools open their doors again, so will she, she added.