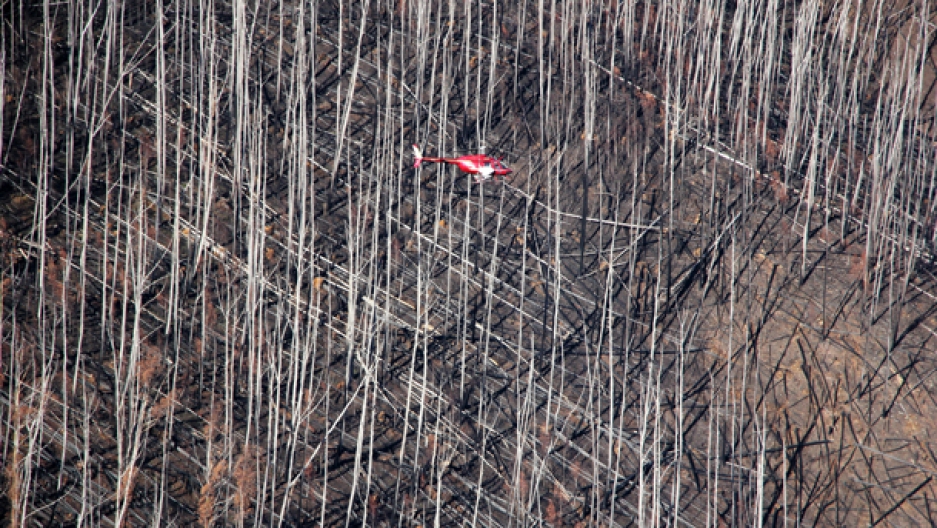 A helicopter sowing alpine and mountain ash seed into the ash of a recent bushfire.

In Australia, wildfires have burned through massive forests of mountain and alpine ash — some of the tallest trees in the world. These trees aren’t naturally equipped to deal with frequent fires and are struggling to grow back on their own. But humans are helping to give them a shot at recovery.

With no intervention, these ravaged forests, located primarily in Southeast Australia, would eventually turn into a different type of ecosystem, like savanna or grassland. Owen Bassett, of Forest Solutions, is not ready to let that happen. For years, he has collected seeds from these trees and manually replanted them in an effort to rebuild the forest.

Because these species are obligate seeders — that is, they can regenerate after fire only from seed and not from their trunks — “if we have enough seed and we have the means to spread that seed where the forest is going to experience population collapse, then we can intervene, lay seed on the ground, and these forests will return,” Bassett explained. “But it's easier said than done. We have to collect the seed and we have to distribute the seed, and that's a mammoth operation.”

Mountain ash trees can grow as tall as 80 meters.

Mountain ash is the tallest flowering plant in the world, Bassett said. In the last 20 years, these forests have burned, on average, every four years. The trees need at least 20 years of growth to be able to reproduce because young trees don’t flower.

“These four year intervals [between fires] are just too quick, and where you get these fires overlapping, then the species is in big trouble,” Bassett said. “We're experiencing that now in Australia. Forests are at the stage of population collapse. Classically, it occurs in species like alpine ash and mountain ash that require much longer periods of fire intervals to survive.”

Bassett has been monitoring the flowering of these species for 26 years. Every year, he maps the distribution of their flowering from a light aircraft, he explained. Once trees have flowered, he marks their location in the landscape. One year later, he can expect these trees will have seed.

At that point, Forest Solutions sends teams of climbers in to scale the 262-foot tall trees and de-limb about a third of the branches on them. “We keep the tree healthy; we keep the growing tip in place,” Bassett said. “We take just a section of that crown out and from that, we can pick the seed pods. They're sent away and the seeds are extracted from … those pods.”

The seeds are tiny, about the size of coarse pepper, Basset added. “It’s extraordinary to think that such a tall tree, something akin to California redwoods, comes from this tiny piece of cracked pepper-size seed.”

Reseeding requires about a pound per acre, Bassett said. The seed is put in a hopper inside a helicopter and spun out the bottom of the aircraft as it flies. The swathe of seed is only 20 meters wide — about 60 feet.

In many areas, young regrowth from earlier fires has burned again. So, Bassett is now wondering if they should even keep trying. “We're re-sowing sites now that burned four or five years ago, and we've always struggled with having enough seed, and this year that's probably a major challenge — insufficient seed to sow this huge area that we're expecting to have to sow.”

Bassett has been pressing Australia’s federal government for years to establish a seed bank, but it has only funded small seed collection operations in reaction to fire outbreaks, rather than gather seed steadily and store it away.

“We needed 10 tonnes of seed this year,” Bassett said. That's the equivalent of about 22,000 pounds of seeds. “At the moment, we might have a third, maybe a half, of that. … It's very frustrating. But, at this stage, we battle on.”

This article is based on an interview by Bobby Bascomb that aired on Living on Earth from  PRX.