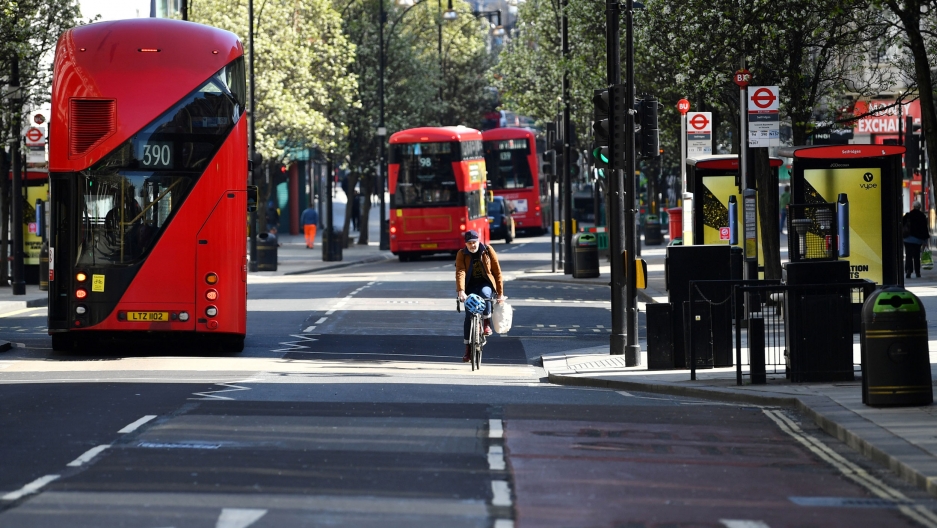 A man cycles on a Oxford Street as the spread of coronavirus disease continues in London, Britain, March 24, 2020.Dylan Martinez

The World Health Organization said on Tuesday that the United States could become the global epicenter of the coronavirus outbreak, as Britain went into lockdown.

And in Japan, officials decided to delay this year's Tokyo Olympic Games into 2021 as the coronavirus crisis obliterated the world's last major imminent sporting event.

It was the first time in the Olympics' 124-year history that they had been postponed, though they were canceled outright several times during the two 20th century World Wars.

But the Chinese province of Hubei, where the virus was first identified in December, said it would lift travel restrictions on people leaving the region as the epidemic there eases.

On the economic side, business activity collapsed from Australia and Japan to Western Europe at a record pace in March, with data for the United States later on Tuesday expected to be just as dire.

WHO spokeswoman Margaret Harris said in Geneva there had been a "very large acceleration" in coronavirus infections in the United States which had the potential of becoming the new epicenter.

Some US state and local officials have decried a lack of coordinated federal action, saying having localities act on their own has put them in competition for supplies.

US President Donald Trump acknowledged the difficulty in a tweet.

"The World market for face masks and ventilators is Crazy. We are helping the states to get equipment, but it is not easy," he wrote.

Confirmed coronavirus cases exceeded 377,000 across 194 countries and territories as of early Tuesday, according to a Reuters tally, with over 16,500 deaths linked to the virus.

Of the top 10 countries by case numbers, Italy had reported the highest fatality rate, at around 10%, which is reflective of its older population. The fatality rate globally is around 4.3%.

Britain, believed by experts to be about two weeks behind Italy in the outbreak cycle, woke up on Tuesday to curbs on movement without precedent in peacetime after Prime Minister Boris Johnson ordered the country to stay at home.

The streets of the capital were eerily quiet as all but essential shops closed and people only went to work if it was essential.

Johnson had resisted pressure to impose a full lockdown even as other European countries had done so, but was forced to change tack as projections showed the health system could become overwhelmed.

After a call with International Olympic Committee (IOC) president Thomas Bach, Japan's Prime Minister Shinzo Abe said the July 24-Aug. 9 event would be rescheduled for the summer of 2021 at the latest as proof of victory over the coronavirus.

"We asked President Bach to consider postponement of about one year to make it possible for athletes to play in the best condition, and to make the event a safe and secure one for spectators," Abe said.

"President Bach said he is in agreement 100 percent."

There was no immediate word from the IOC, though its executives were due to meet later on Tuesday.

Athletes were sad but relieved after weeks of worrying and struggling to train as the world headed into virtual lockdown from the disease that has claimed more than 16,500 lives.

"I compete in a little bike race, which is nothing compared to what is going on in the world right now," American Olympic BMX champion Connor Fields said. "No sport is more important if it means more people might potentially die from this."

Pressure on the IOC and its powerful president Bach had been accelerating fast in recent days, with Canada and Australia refusing to participate if the Games went ahead in the summer.

Athletes wholeheartedly endorsed the delay, given health risks and disruption to their training as gyms, stadiums and swimming pools shut down around the world.

China's Hubei province, the original epicenter of the outbreak, will lift travel curbs on people leaving the area, but other regions will tighten controls as new cases double due to imported infections.

The provincial capital Wuhan, which has been in total lockdown since Jan. 23, will see its travel restrictions lifted on April 8.

However, the risk from overseas infections appears to be on the rise, prompting tougher screening and quarantine measures in major cities such as the capital Beijing.

By Emma Farge and William James/Reuters