Two-year-old Tharunicaa has spent nearly all of her life imprisoned. She and her family — her 4-year-old sister, Kopika, and their parents, Priya and Nades — are being held in a remote Australian detention center in the middle of the Indian Ocean.

The family members have been the only people detained on Christmas Island until the government made the controversial decision earlier this year to use the center as a temporary quarantine site for Australian COVID-19 evacuees. Australian nationals and permanent residents evacuated from China were held on the island for a 14 days and later allowed to leave.

The move brought renewed attention to a family that has been isolated there, largely out of sight and out of mind, for seven months.

Priya and Nades are both Tamil asylum-seekers. They fled Sri Lanka's civil war and arrived in Australia around eight years ago, where they restarted their lives under a temporary visa program while their claims for refugee protection were being processed. They married, had two daughters, and settled in Biloela, a rural community in northeast Australia.

Two years ago, Priya’s bridging visa expired. Just hours later, the family was plucked from their home in a pre-dawn raid. In August of 2019, the government moved to deport them back to Sri Lanka. Then a court injunction issued mid-flight forced the plane to land in Darwin, in northern Australia. The family’s lawyers argued that Tharunicaa's refugee status had not been adequately assessed, and the court ruled that the family could not be deported without determining if a path to protection is open to the girl.

Australia sent the family to an empty, high security detention center on Christmas Island — 1,000 miles northwest of the Australian mainland.

But instead of keeping the family on the mainland to await legal proceedings, the government took an extraordinary step. It sent them to an empty, high-security detention center on Christmas Island — 1,000 miles northwest of the Australian mainland and far away from lawyers, health care workers and advocates.

The family's situation has sparked condemnation from the Australian public and the United Nations. It’s an example of Australia’s increasingly restrictive immigration policies, which intend to deter asylum-seekers who arrive by boat from coming to the country in the first place. 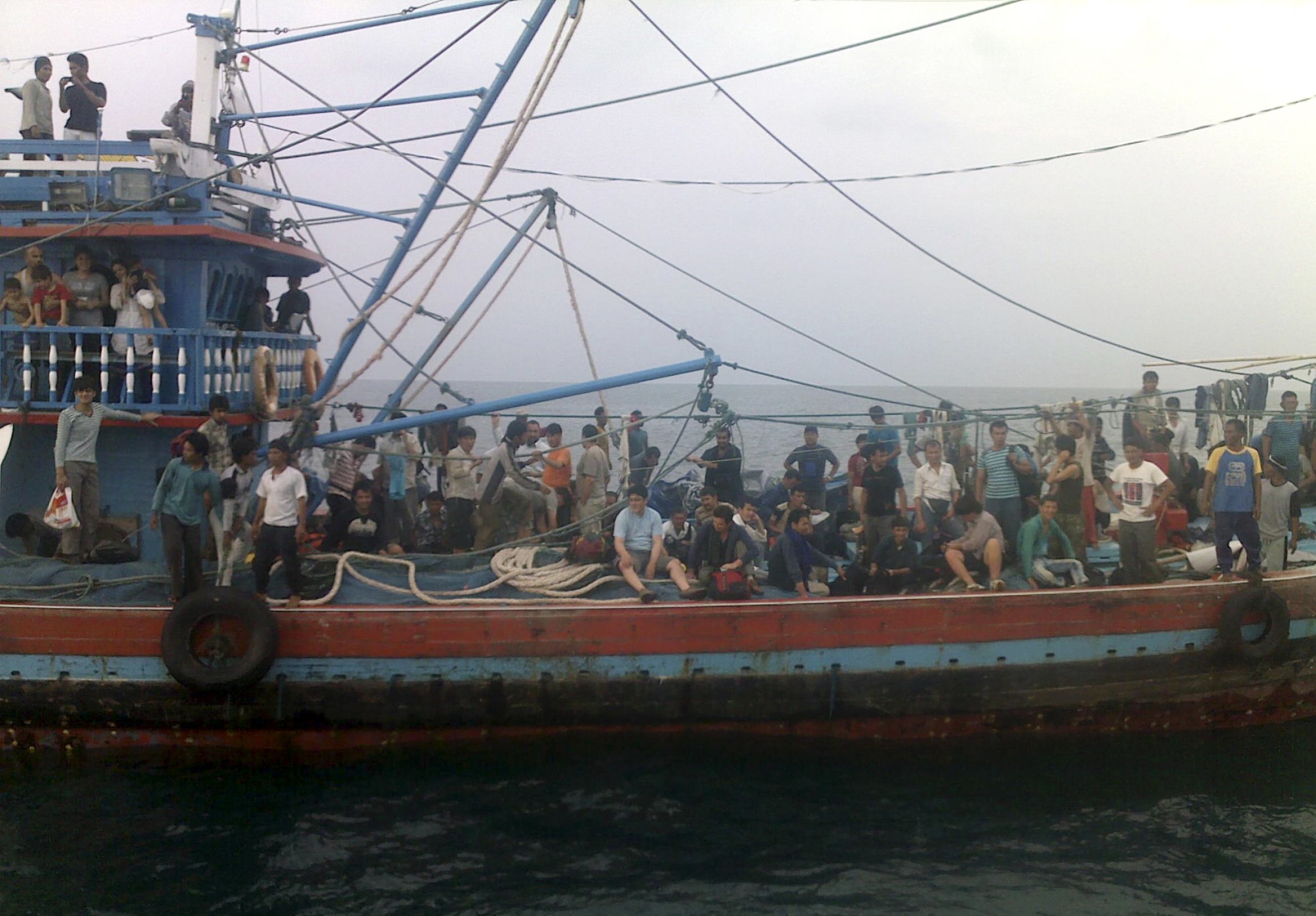 Asylum-seekers sit on a fisherman's boat after they were rescued when their boat sunk off Sunda straits, in Indonesia's Banten province May 24, 2011. Around 95 asylum seekers from Pakistan, Iraq, Afghanistan and Iran were detained by Indonesian police after their wooden boat sunk off Sunda Strait while they were heading to Christmas Island in Australia, according to local police reports.

Priya and Nades are caught in immigration limbo, in part because of how they arrived in Australia — on a boat, not a plane. That mode of transportation makes a difference in how their pleas for protection are handled, as the Australian government has put a number of policies in place to stop asylum-seekers arriving by boat.

Under these restrictive laws, it is unlikely for asylum-seekers who arrive by boat to receive anything more than temporary protection visas. Because Nades and Priya arrived by boat, they could not make a claim for refugee protection unless government ministers gave them permission. In 2017, the minister for immigration briefly lifted that restriction to allow a cohort of asylum-seekers known as the “legacy caseload” — including Priya — the opportunity to apply for refugee protection.

Even though Kopika and Tharunicaa were born in Australia, the country doesn’t offer birthright citizenship, so the children come under their parents immigration status. Because Tharunicaa was born after her mother and sister’s case was assessed, her status is technically unknown. Her lawyers, however, argue she is part of this “legacy caseload.”

The parents' initial requests for asylum were assessed using a controversial “fast-track” process, meaning asylum-seekers have fewer legal support resources and less time to make their claims for protection. There is also less independent oversight, and no new evidence is allowed during appeals. Priya's initial asylum assessment is also shrouded in questions of fairness. The Guardian reported transcripts of her interview show key elements of the conversation, including evidence around torture, were missed by some officials.

And policies have tightened further. Australia is seeking a lifetime ban on anyone who arrived by boat after 2013 — even if they have a legitimate claim to refugee protection.

Prior to his government being elected, now Prime Minister Scott Morrison described the need for these policies as part of a “war against people smugglers,” but advocates describe it as “a war against asylum seekers.”

“Stopping the boats” has dominated Australian headlines for decades — whole elections have been won on that platform. Social scientists say the fear of “boat people” has its roots in Australia’s long held anxieties of invasion from non-white people after the British colonized the country.

Ramesh Fernandez is the founder and CEO of RISE, a refugee organization in Australia governed and run by ex-detainees, refugees and asylum-seekers. It has played a key role in advocating for the family.

“What the government is trying to do, they want to set a precedent,” said Fernandez of the family's detention. “They want to show this as an example. If you come to Australia, this is what we will do to you, so don't come.” 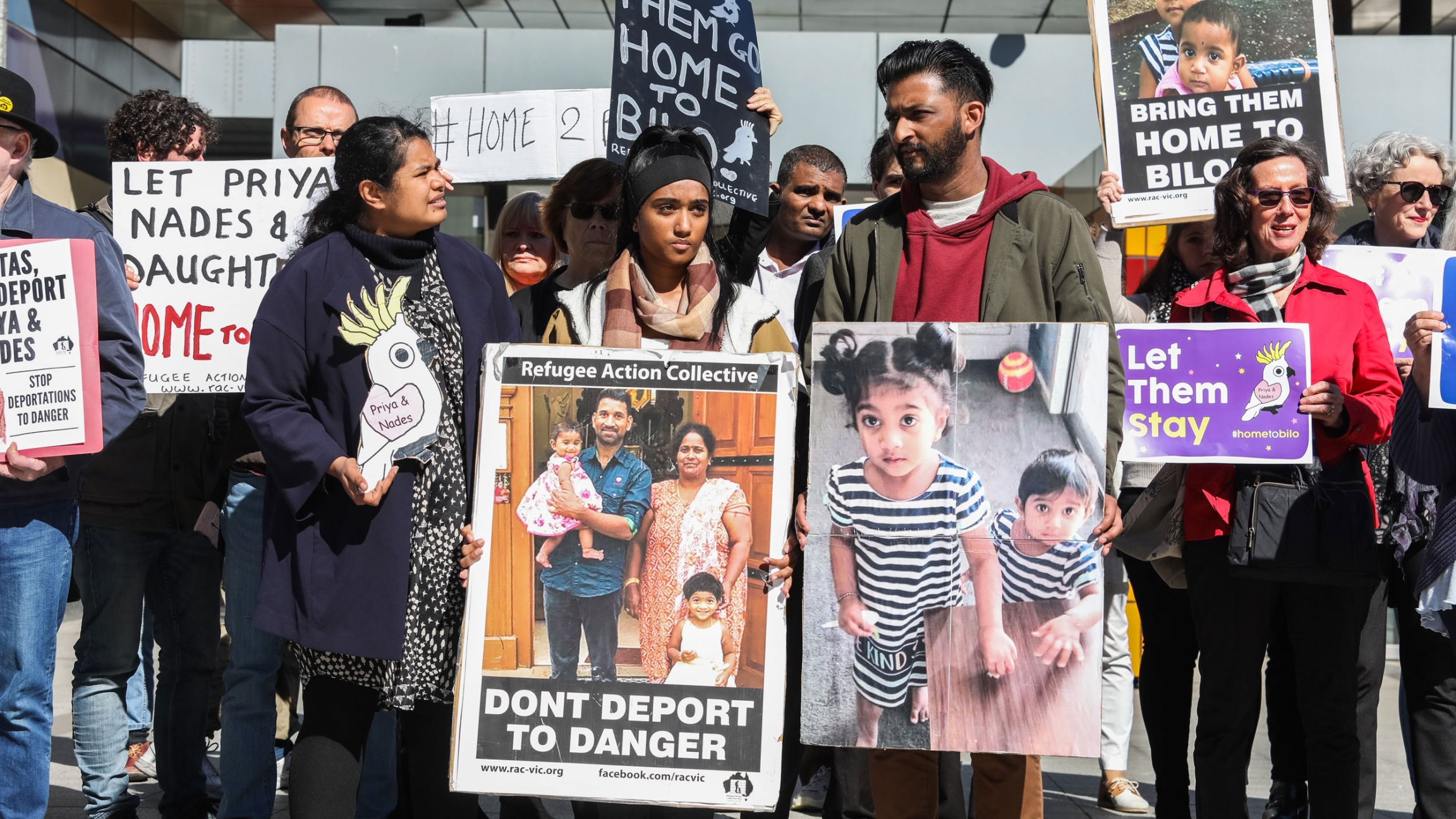 Protesters outside a Federal court hold placards in support of a Tamil asylum seeking family in Melbourne, Australia.

Fernandez himself was a Tamil asylum-seeker who also fled Sri Lanka’s civil war and knows first hand the trauma of living in detention conditions. He was imprisoned for nine months in the Christmas Island detention center, followed by two years in the notorious Woomera and Baxter detention centers on the outskirts of the Australian desert.

" ... most of my peers and people who've been in detention centers, their lives have been, like, disabled to the limit they are not able to function."

“I can see what they [the family] are going through because most of my peers and people who've been in detention centers, their lives have been, like, disabled to the limit they are not able to function. Physical mobility or emotional mobility is not there.”

In detention, 2-year-old Tharunicaa's teeth have rotted — a result of lack of access to fresh food and sunlight — and 4-year-old Kopika is exhibiting signs of post traumatic stress. Their mother Priya says living in detention is “mental torture.”

Related: New data on China's detention of Uighurs: 'They could charge you for anything'

“The detention center itself, where the clients are currently located, is run down. It's not in a good state. It's brutally hot,” Ford said. “Therefore, you know, it's limited to what you can do during the day. And there's just the isolation factor."

The International Criminal Court has called Australia's offshore migrant detention system cruel, inhuman and degrading and illegal under international law, and there have been numerous reports of abuse in such facilities.

In addition to the stress of fighting a deportation case, Ford says the loneliness and monotony affects the parents the most. Very recently they’ve been allowed a couple of restricted outings, but always accompanied by guards who monitor their interactions.

“They're not allowed to communicate with other people [locals] who may come up to them, who want to say hello or anything, and that they've actually found quite disheartening,” Ford said.

The conditions in detention are particularly painful for the children, even the freedom to play is curbed.

"... that is almost torturous, that you're making kids look at a playground that they can't play on.”

“There was a playground set up and they can't access it. And I said, 'why can't they access the playground? That's ridiculous. There's no one else here,'” Ford said. “I thought, that is almost torturous, that you're making kids look at a playground that they can't play on.”

Millions to detain a family of four

Fernandez of RISE said the family's treatment is part of the larger framework of Australia’s hardline refugee policies, which is now inspiring far-right politicians in Europe and the Trump administration in the US.

“Donald Trump said to [then-Australian Prime Minister] Malcolm Turnbull that you are 'worse than me, your policy’s sort of something that we need to adopt,'” Fernandez recalled of a 2017 phone call between the two leaders.

Related: Trump administration retaliates against states trying to lessen use of immigrant detention

Australia's detention regime also comes at great cost to taxpayers. The Christmas Island center was open from 2008 but closed in 2018. It briefly reopened in February 2019 at the cost of $185 million, when a new law allowed asylum-seekers in other offshore immigration detention to fly to Australia for medical treatment. The center was subsequently closed in a matter of months after the government vowed to repeal the law. But it reopened in August 2019 specifically to detain Priya, Nades and their daughters. With this new iteration of the detention center, the government has spent $26.8 million to detain four people.

But those millions spent have not eased the family's experience.

“It's a death camp and then every day they are emotionally going through hardship ... and that's going to be indefinite.”

“The family who is in Christmas Island, [on a] daily basis they wake up in a torture camp and it’s torturing,” Fernandez said. “It's a death camp and then every day they are emotionally going through hardship ... and that's going to be indefinite.”

A judge will soon rule on whether Tharunicaa has a pathway to protection in Australia. If she is granted refugee protection, her family would be allowed to stay.

Fernandez is concerned for their safety if they were to be deported back to Sri Lanka.

“If they go back their life will be in danger. Definitely. And most of the time, you won't find out what's happened straight after. Just suddenly they disappear,” he said. “It is a well-known case now and the Sri Lankan government is definitely monitoring it.”

But for now, the four remain in limbo on Christmas Island. It could be months before that changes.