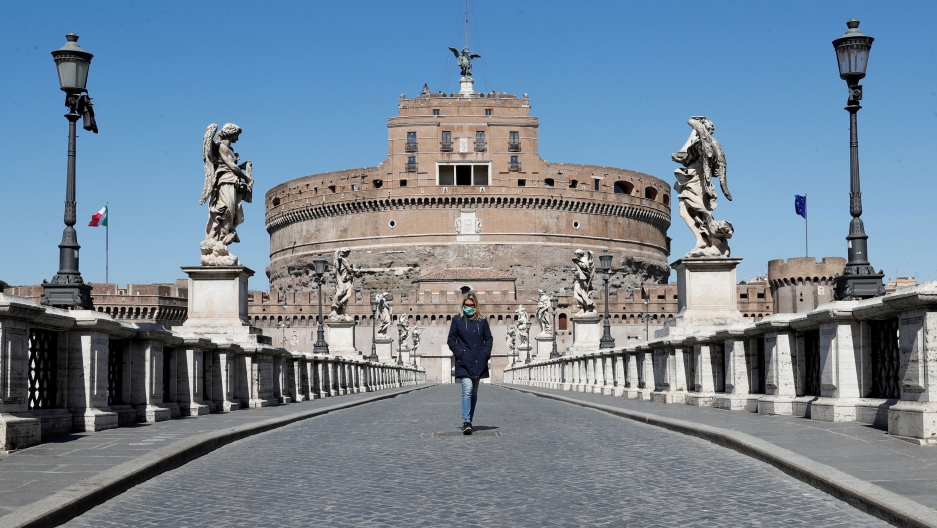 A woman wearing a protective mask walks outside Castel Sant'Angelo, as Italy tightens measures to try and contain the spread of coronavirus disease, in Rome, Italy, March 23, 2020.

World leaders are desperately asking their populations to social distance and stay home as more than 350,000 cases of the novel coronavirus are confirmed around the world and more than 15,000 people have died. Gatherings in Germany have been limited to two people, and there are signs that the spread might be leveling off in the country. At least one in five Americans has been ordered to stay home, as the number of confirmed infections in the US rises to the third-highest in the world.

Cuban doctors are on their way to help virus-ravaged Italy, where nearly 5,500 have died. Funerals have been banned in the country, and crematoriums have not been able to manage, making final goodbyes even more tragic.

And: You can't practice social distancing if you're a refugee

The US Justice Department has pushed Congress to expand its emergency powers during the coronavirus pandemic, including the ability to detain people indefinitely without trial, Politico reports.

And a nearly $2 trillion economic package failed in the Senate Sunday, as Democrats raised concerns the proposed package was a corporate giveaway with too little congressional oversight. They said it also lacked sufficient emergency food aid, resources for workers, student loan relief, as well as funding for state and local governments. Negotiations continue, and a new vote will likely take place Monday.

And: Fed announces unlimited bond purchases to help US economy

Also: Chinese coronavirus test kits approved for use across Europe, US

Over the last few weeks, as universities responded to COVID-19, international students had to make quick decisions that may have consequences for years to come.

Some have had to find new housing as colleges shut down dormitories. Others have taken a chance on leaving to be with their families in their home countries. As spring break ends, classes for many begin online next week, there may be a new set of headaches.

Usually, an international student visa in the US only allows for one online course. The rest must typically be in person. So students panicked as colleges announced that classes were moving online.

And: US students are being asked to work remotely. But 22% of homes don't have internet

Under sanctions, Iran rejects offer of US assistance

Iranian leaders have rejected US offers of assistance to battle the coronavirus. Iran has faulted US sanctions with hampering the response in the country, which now has more than 23,000 cases and nearly 2,000 deaths from the virus. The US has refused to lift sanctions but did offer humanitarian assistance.

“Several times Americans have offered to help us to fight the pandemic. That is strange because you face shortages in America," said Iran’s Supreme Leader Ayatollah Ali Khamenei, who also vowed to defeat the virus. 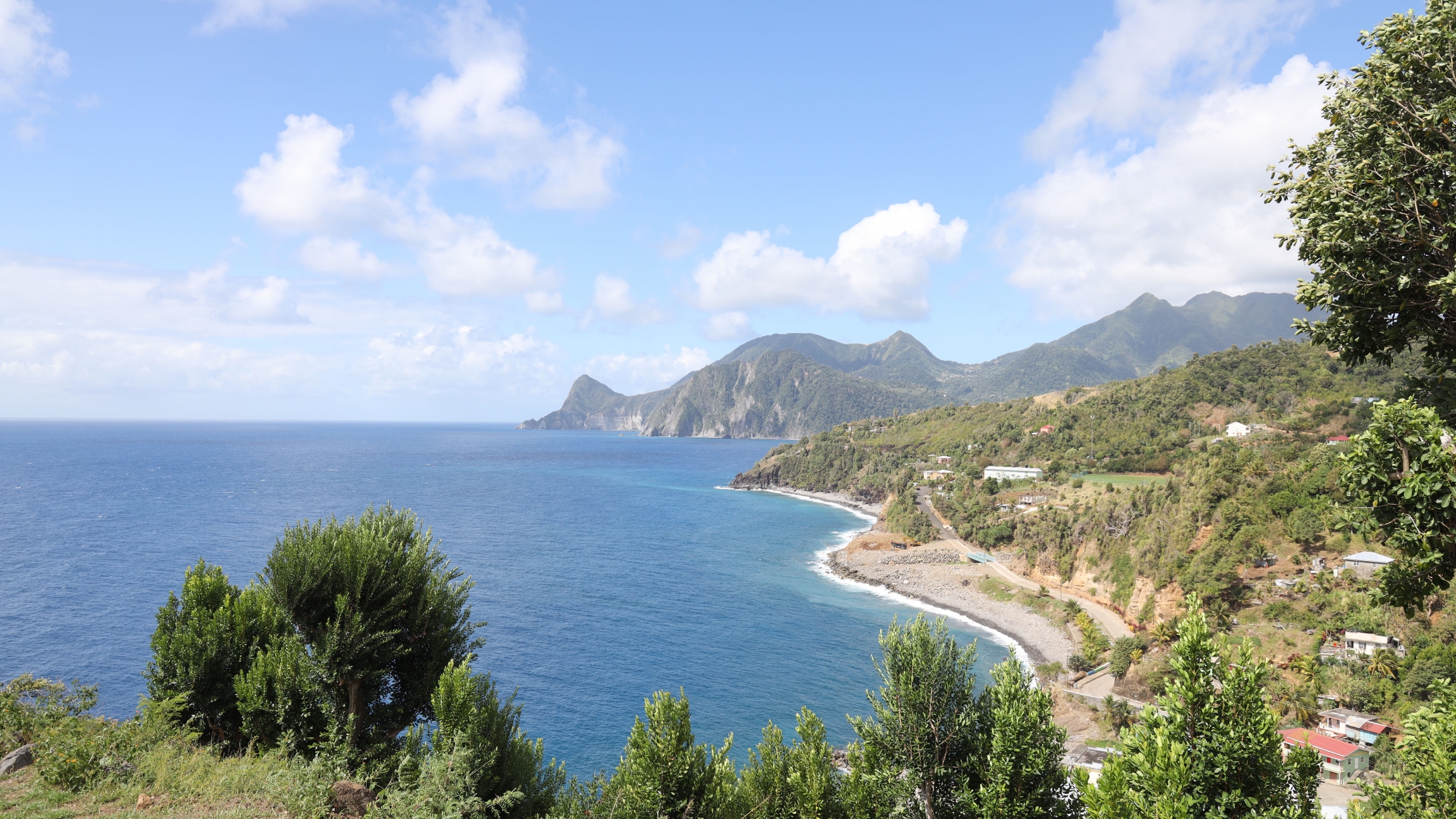 The small Caribbean island of Dominica has been building back since Hurricane Maria flattened much of the island in 2017. It’s trying to build back stronger, and become what it calls the first climate resilient nation.

Dominica, devastated by Hurricane Maria in 2017, wants to be an example of how to build back better. Billboards around the capital advertise Dominica’s efforts toward resilience and urge residents to read updated building codes online. Work on a small, geothermal plant is soon to begin, and communities around the island are preparing themselves for the upcoming hurricane season.

These changes are signs of Dominica’s ambitious new national goal — to become the world’s first “climate-resilient” country. That goal emerged just five days after the storm; Dominica’s Prime Minister Roosevelt Skerrit made it to the United Nations General Assembly in New York and asked for help creating a new era of green economic development.

Editor's note: Pictures of cute animals have buoyed spirits across the internet during the pandemic. But National Geographic warns that many such stories have been faked, including Friday's "morning meme" of elephants asleep in a tea garden.

But animal lovers can still build some non-human connections — and provide much-neede relief for shelters — as some look to foster and adopt pets and urban farm animals.

Listen: A week in coronavirus 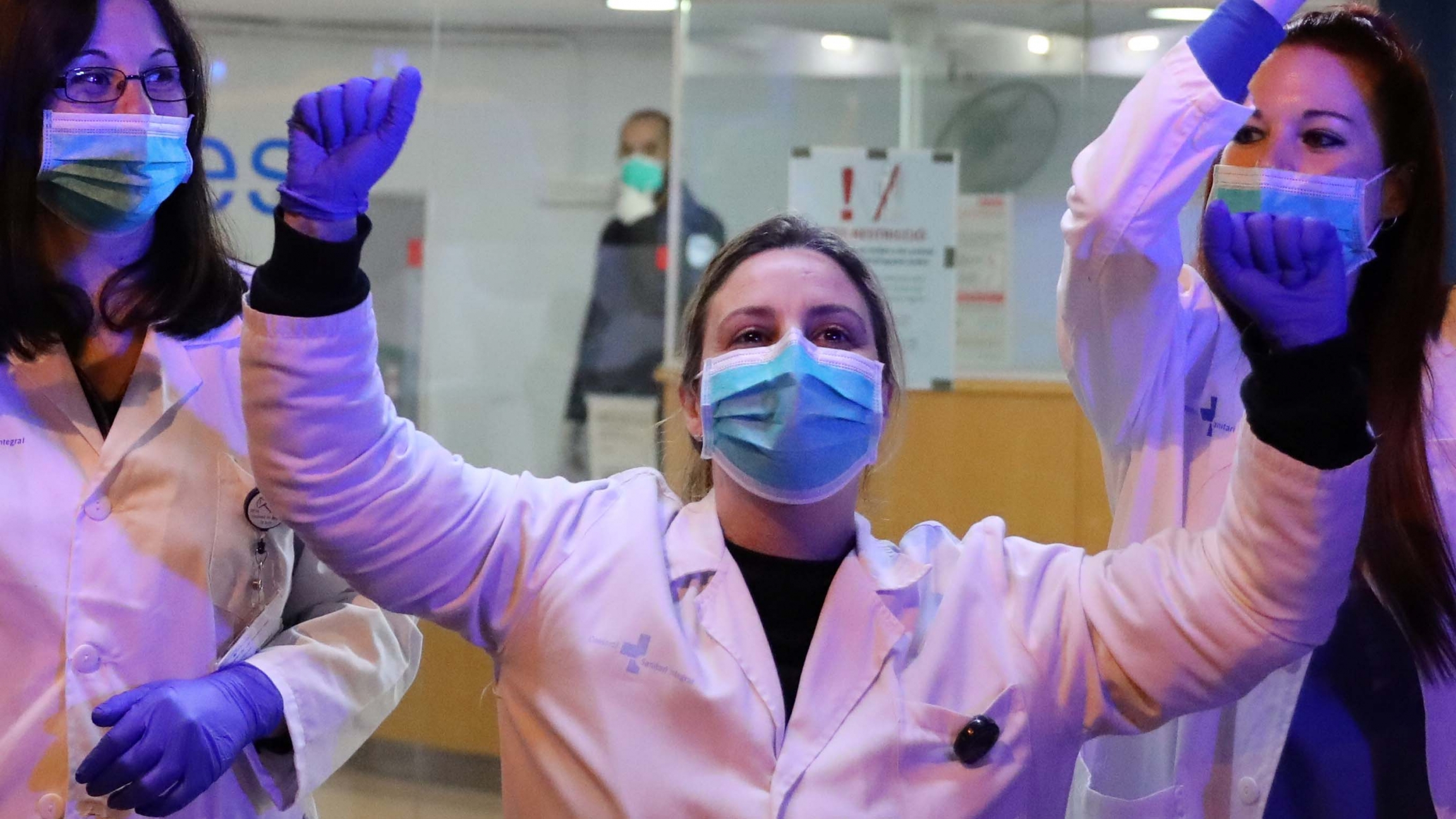 Health workers applaud people who show them gratitude from their balconies and windows as part of an event organized through social media, during a partial lockdown as part of a 15-day state of emergency to combat the spread of coronavirus disease (COVID-19) in Barcelona, Spain, on March 20, 2020.

Everybody, everywhere is discussing one thing: the coronavirus pandemic. The World's public health reporter Elana Gordon lays out we've learned about the science of the virus this week. And, The World speaks to a bioethicist to clear up several of US President Donald Trump's false statements on treatments for coronavirus. Also, radio DJs across Europe send a musical message to people across the continent: You'll Never Walk Alone.