Last Wednesday evening, a few hours before the Italian Prime Minister Giuseppe Conte announced drastic measures locking down the country, I went for a stroll in Turin. A number of others, too, were out getting a breath of fresh air. For many, including myself, going out for a walk was a way to feel less lonely and combat fears at a time of enormous change, both individual and collective.

That day feels like it was a long time ago. After one week of lockdown, the government is now considering banning outdoor activities.

Italy is in a state of unprecedented lockdown in an attempt to halt the spread of the new coronavirus that has already infected more than 35,000 people and has led to nearly 3,000 deaths nationwide as of March 18. For at least two more weeks, businesses will remain closed; only grocery stores, pharmacies, banks and post offices will be open.

People have been asked to stay home — and may need to present self-certification, a document downloaded from a government website, when leaving to buy food or medicine. Over the past two weeks, police officers have stopped and checked more than a million people; 43,000 of them have been denounced, and they could be penalized later.

Last Wednesday, when I went out, I didn't know it would be my last stroll for some time. That day, in my neighborhood, San Salvario, when I set out, four people stood in front of a supermarket, waiting for their turn to go in. They were standing one meter apart from each other to avoid contact.

Down the street, at Valentino Park, along the Po river, there were lots of people. Some were keeping an eye on their children, who ran around letting off steam. They have been home from school for more than two weeks now.

Others in the park jogged or rode their bikes. Most walked alone and talked on their phones or looked at each other silently. The kiosk serving drinks was open, but there were no customers. The young woman who works there sat inside and mouthed the lyrics of “Più bella cosa,” an old hit by Eros Ramazzotti. 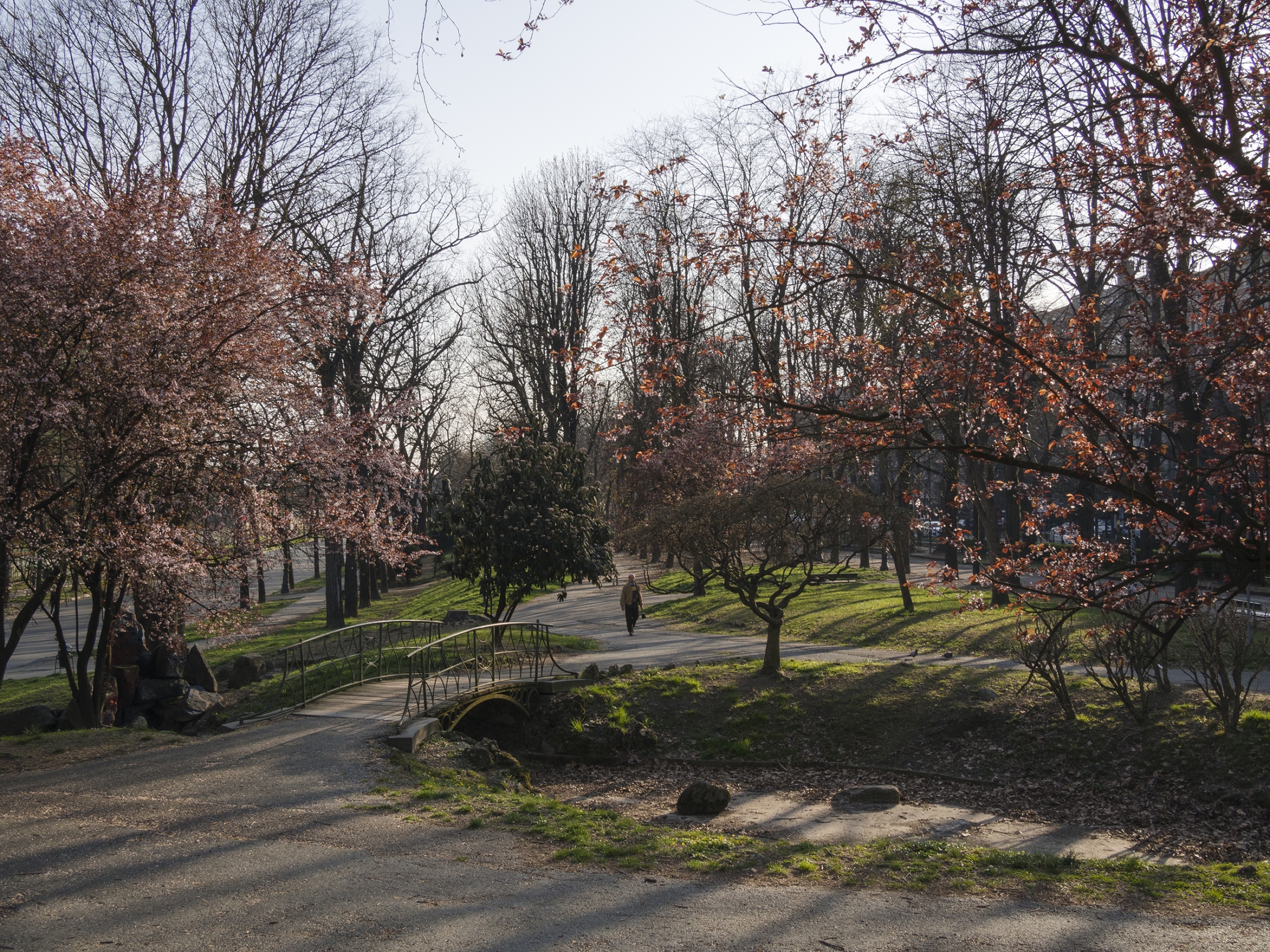 Valentino Park in the Italian city of Turin has emptied out amid lockdown.

Two high school teachers told me they are taking a break from their work — they were attempting to organize remote lessons for their English classes. “We are trying, but we are obviously not prepared, because up until now, we have always taught in the classrooms,” said the two women, who didn’t want to give their names, and who were finishing each other’s sentences. On this day, they said, their online platform had run into some technical snags.

Related: In Jerusalem’s Old City, the faithful cope with the coronavirus

“It’s a mess. Even the students are saying, ‘I won’t be able to do the exercises for tomorrow, I can't do it,’” the women said.

Back in the streets of my neighborhood, there were very few people outside. Metal shutters covered the doorways of shops that have been forced to close. Shop owners have posted handwritten signs that say, “We are closed, we don’t know for how long.” It is precisely this uncertainty that makes the atmosphere so sad and distressing.

A popular neighborhood backpackers’ hotel, Tomato, was closed. Inside it was dark, the front door ajar. Tommaso Vineis, the owner, was in the hallway. He tells me business was going so well that he had recently expanded the place. “That was before the new coronavirus hit the country. We closed on the 28th [of February], but already from the 22nd, 23rd the place was basically empty. And we are getting a lot of cancellations, even for September, October.”

Vineis is doing what many employers are now doing, which is what the government recommended: asking his employees to take their holidays.

“I’m sure that this will radically change the hotel industry in Italy, because many family hotels will probably close, it depends a lot on what the government will do.”

Vineis is a member of the national association of hotel owners, Federalberghi, and said what is happening here is happening all over the country, even in places that have not been directly affected by the virus. “I’m sure that this will radically change the hotel industry in Italy, because many family hotels will probably close, it depends a lot on what the government will do,” he said.

The tourism industry is among the most hurt by the situation, as it is expecting a drop of more than 30 million tourists over the next three months. And those most impacted are small businesses.

Related: 179 countries have paid sick leave. Not the US.

This worries Sergio Bigiordi, the owner of a historic neighborhood bar called Biberon. He sat in front of the bar’s window; the metal shutter was half lowered so that the music drifted out. “It’s a day-by-day business. If you haven't cashed in the day before, you're having trouble getting supplies the day after. What you cash in goes away with rents, salaries, taxes, fines, etc. … There's nothing left,” he said.

The Italian government claims no one will lose their job as a result of the coronavirus and has approved investments of up to 25 billion euros for economic recovery. That money, Bigiordi says, will increase the country’s debt. “There is no solution … for now, I asked my two employees to stay at home,” he said.

Like him, many people are skeptical of the government’s claims. In the already fragile Italian economy, not all jobs are protected by contracts. 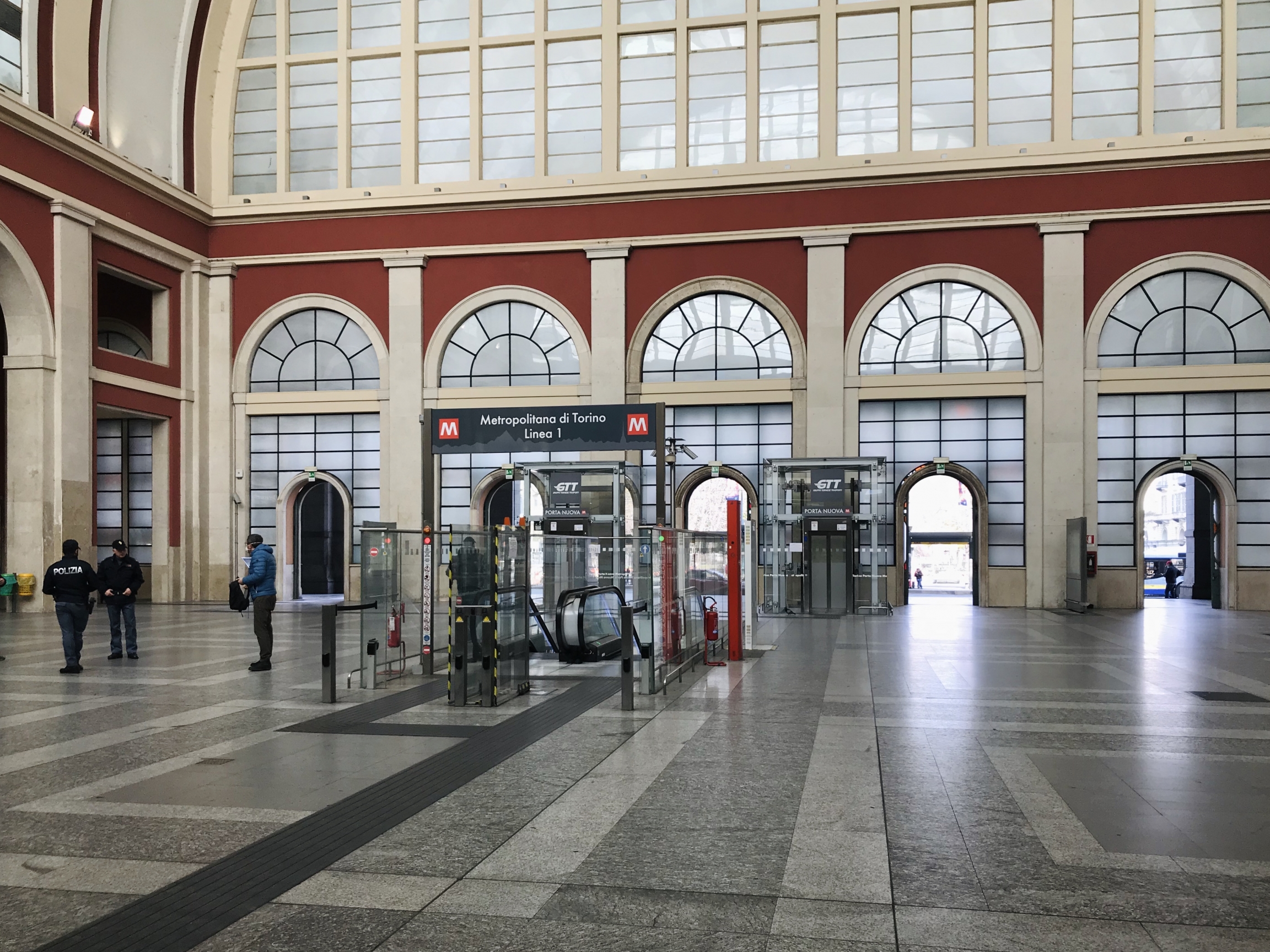 Turin's main train station, Porta Nuova, was semi-deserted. In front of the train tracks, at two checkpoints, police officers reviewed the documents of those who needed to board. According to the new government rules in place until at least April 3, anyone caught traveling without a valid reason during this period risks a fine and up to three months in prison.

This makes places like this — a beautiful train station — look like a dystopian space. Among the 10 people getting off a train, there was a doctor who works in Alessandria, one of the first Italian cities to be placed in lockdown. The woman, who asked not to be named, is new at the hospital, but could soon be asked to help out in the emergency room. “It is a critical moment for us because there’s a shortage and lack of protective equipment, such as masks,” she said.

Italian doctors are fighting a war, often in conditions that put their own lives at risk. They are working around the clock and forced to make painful decisions, such as treating one patient and leaving another one to die. And no one knows how long this will go on. “It’ll be a long time before we can breathe a sigh of relief. It will be months before we can get back to our usual lifestyle,” the woman said.

On March 11, mere hours after my walk, the government announced new restrictions: Everybody must stay at home unless they have a good reason to go outside — such as to pick up medicine or buy food. No more casual walks around the neighborhood or the park to see people or to clear my head.

Everyone has their own way of coping with that, and some people have found a creative way to stay connected with their neighbors: Every day at 6 p.m., people all over the country go out on their balcony to sing with the entire street. They often croon classic hits; on my block, they sing tunes from Lucio Battisti and Edoardo Bennato. They have also done the national hymn, though the lyrics go Siam pronti alla morte, or “We are ready to die,” so people have realized other songs would be better.

Not everybody appreciates these improvised concerts, but for some, it’s a way to create a routine and lift their spirits under circumstances that seem surreal. One local bar put up a sign that seemed to sum it up well: “Il locale è chiuso fino alla fine della burrasca. Buon vento a tutti,” or “The bar is closed until the tempest is over. Enjoy the wind.”