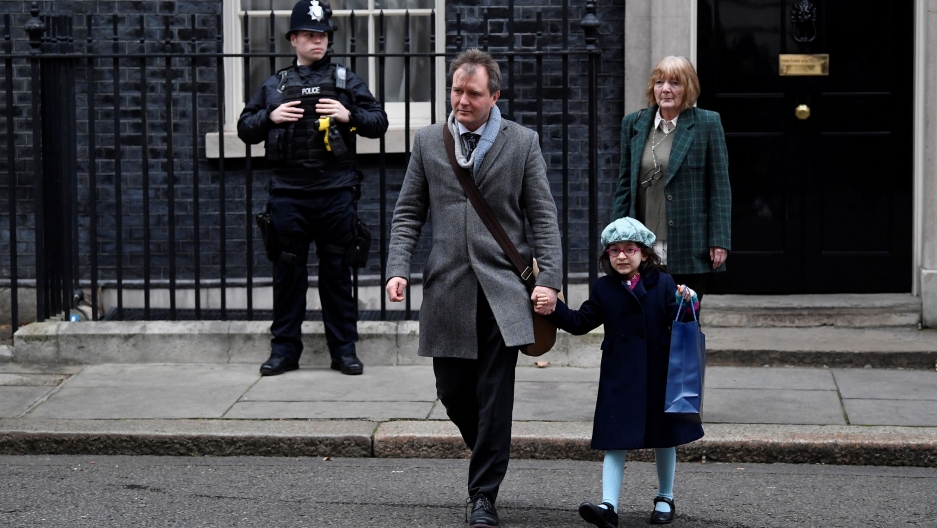 Richard Ratcliffe, the husband of Nazanin Zaghari Ratcliffe, his daughter Gabriella and his mother are pictured outside Downing Street in London, Britain, Jan. 23, 2020.

Iran has been hit hard by the novel coronavirus, with more than 17,000 confirmed cases. To try to ease the risk of transmission, Iran has now furloughed some 85,000 people from prison.

Among them is the British Iranian national, Nazanin Zaghari-Ratcliffe, a charity worker who is serving five years for espionage — a charge she has consistently denied.

Host Marco Werman spoke with Nazanin's husband, Richard Ratcliffe, who is in London. 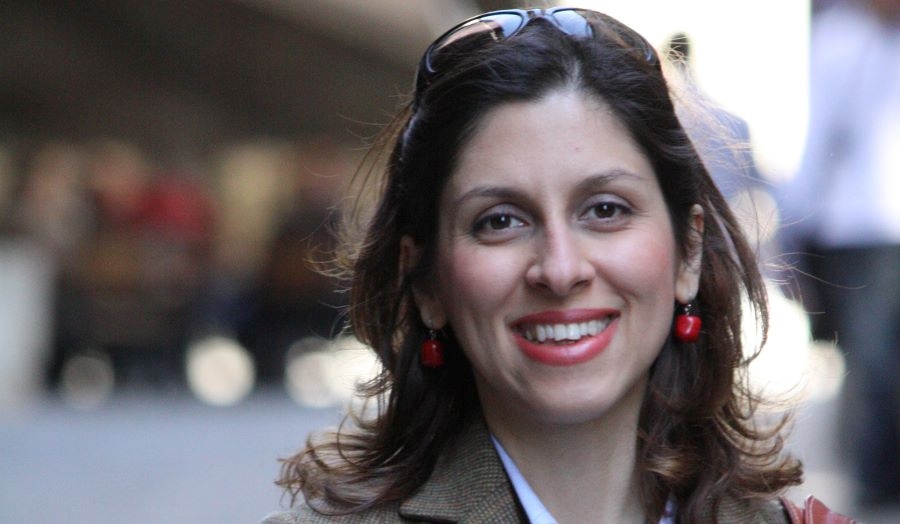 Marco Werman: Thank you for being with us again, Richard. The last time we spoke, a new concern for Nazanin's health. She was showing symptoms of COVID-19 while in prison in Tehran. How's her health today? What do you know?

Richard Ratcliffe: Yeah, that's exactly right. She clearly had symptoms, was very ill for about two weeks, and then probably after two weeks, slowly started getting better. And as of about four or five days ago, seemed completely clear. So I'm a lot more relieved about her physical health than I was the last time we spoke. She looked great on the phone and I got to speak to her on Skype. I mean, she looks thinner, but a big smile on her face. And of course, it's nothing like being out of prison to feel a lot better.

Listen: British woman jailed in Iran might have COVID-19

I can imagine. And she's staying with her parents in Tehran. How did her spirit seem?

Yes, that's right. So she's been staying with her parents. She's been given an electronic tag — exceptional, I don't think any other prisoner has been given that. So she's got a radius of 300 meters that she's able — so, actually, she can't go very far from her parents. Can't actually go to the shop or to park. But yeah, lovely to be out of prison. And I think she spent all morning, apart from speaking to us, calling around to family and friends and all those people that aren't able to visit prison, just to sort of catch up and be in contact again with world outside.

Did she talk about what the separation from her cellmates was like for this temporary release?

Yeah, this morning I spoke to her and she said that she woke up and obviously it was lovely to be at home and to be in her mum's house. But she woke up remembering all her cellmates that had been left behind who are still suffering and struggling. Her world for the past four years has been those cellmates, and the friendships they form, how they help each other survive. In fact, when she was leaving yesterday morning, a number of them wore necklaces that she'd made, they all sang songs as she was going. That kind of human kindness, in a context of real cruelty, is so important to keep you going. But yes, it does mean that she really treasures them in hopes that they will all be OK.

That's really powerful. How concerned are you by the spread and impact of the coronavirus there? And how are your in-laws holding up right now?

Yes. So, I think she's had it. So that obviously changes our worries slightly. And I think she's not contagious now. So my worries about my in-laws are less. Generally, it is a really tough time to be living in Iran at the moment. Coronaviruses in a long list of things that's happened to people in Iran in the past few months. There's a way in which there's almost too much to worry about. And people focus on the here-and-now and now being grateful that, you know, we've got a new year and that she's out and we can have some sort of celebration.

Just to clarify, you believe she had COVID-19, but she was not tested?

Yes, no prisoner has been tested that I'm aware of. I think there's obviously government propaganda put out to say they have, but I don't think anyone's been tested. Certainly she wasn't. There was certainly great resistance to testing her. She had all the symptoms. She's got better. I'm grateful for that.

And Richard, what was the reaction from your daughter there in London to this news about this temporary release?

Yes. So, I told Gabriella yesterday on the way back from school that, you know, we're going to make a phone call when we get home. And do you know who it was, do you want to guess? And obviously, her first guess wasn't mummy. And then she was very excited when it was mummy. And, actually, bless her, she asked Nazanin why she'd gone to granny's house and hadn't come to our house. So, you know, she's little enough not to be able to process it, but she's she's big enough to ask some tough questions that can leave her parents stumped.

This interview has been edited and condensed for clarity. Follow the latest COVID-19 coverage from The World.