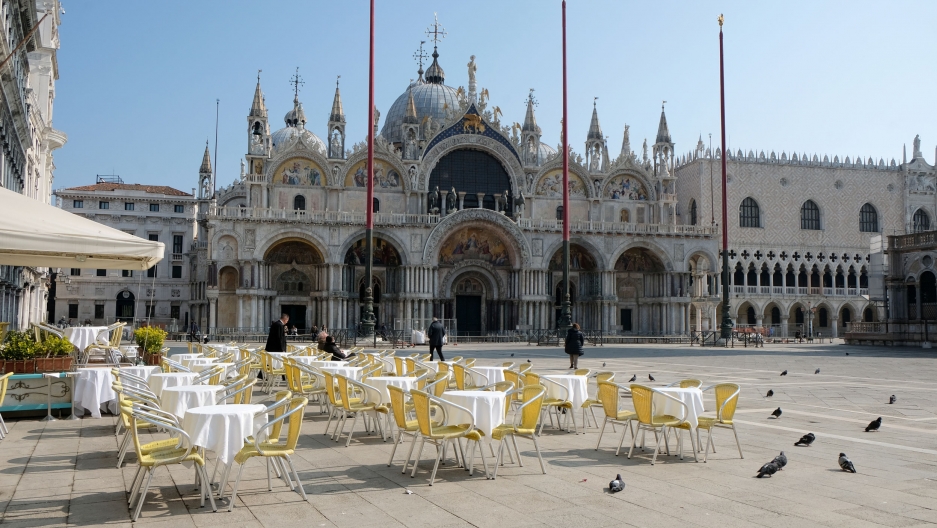 An empty restaurant in St. Mark's Square is seen in Venice on the second day of a lockdown across of all Italy imposed to slow the outbreak of coronavirus, in Venice, Italy, March 11, 2020.

In a move to try and prevent a recession, Italy earmarked $28.3 billion to soften the economic impact of the world's second-biggest coronavirus outbreak on Wednesday and the Bank of England cut interest rates.

US President Donald Trump, who for weeks played down the seriousness of the illness and blamed "fake news" for its spread, said on Tuesday he would ask Congress for a tax cut for workers and other "very major" stimulus moves to ease the economic impact, but the details were unclear.

The coronavirus, which emerged in China in December, has spread around the world, halting industry, bringing flights to a standstill, closing schools and forcing the postponement of sporting events and concerts. Even the Tokyo Summer Olympics are in question.

The West has watched in shock in recent weeks as infections have ballooned in Italy, Iran, France and Spain after more moderate growth elsewhere.

German Chancellor Angela Merkel said up to 70% of the world's population was likely to be infected in the absence of a cure.

"When the virus is out there, the population has no immunity and no therapy exists, then 60 to 70% of the population will be infected," she told a news conference in Berlin.

Last week, the Italian cabinet said it would need just 7.5 billion euros to fight the virus, but since then the emergency has escalated and the nation, already close to recession is under lockdown.

Prime Minister Giuseppe Conte told reporters that already tough restrictions on movement might be tightened further after the northern region of Lombardy, centered on Italy's financial capital Milan, asked for all shops to shut and public transport to close.

"We are ready to listen to requests from Lombardy and other regions," Conte said. "The main objective is to protect citizens' health, but we must take into account that there are other interests at stake. We must be aware that there are civil liberties that are being violated, we must always proceed carefully."

In London, the Bank of England cut interest rates by half a percentage point and announced support for bank lending just hours before the announcing of the budget.

The central bank announced its unanimous emergency rate cut as London markets were opening and before Prime Minister Boris Johnson's government sets out its spending plans at 8:30 a.m. ET.

Britain's new finance minister, Rishi Sunak, is expected to  pledge billions of pounds to fight the impact of the coronavirus.

He told ministers on Wednesday that his budget, alongside the Bank of England moves, would make Britain "one of the best placed economies in the world" to tackle the impact of coronavirus.

European stocks staged a small comeback after the Bank of England announcement, raising hopes for more coordinated monetary and fiscal stimulus elsewhere. Money markets are fully pricing in a further 10 basis-point cut by the European Central Bank when it meets on Thursday.

But not all the news was bad.

As cases exploded in the West, some key industries in Wuhan, the Chinese city at the epicenter of the epidemic and a center of car manufacturing, were told they could resume work on Wednesday, a day after President Xi Jinping visited the city for the first time since the outbreak began.

By David Milliken and Giulia Segreti/Reuters