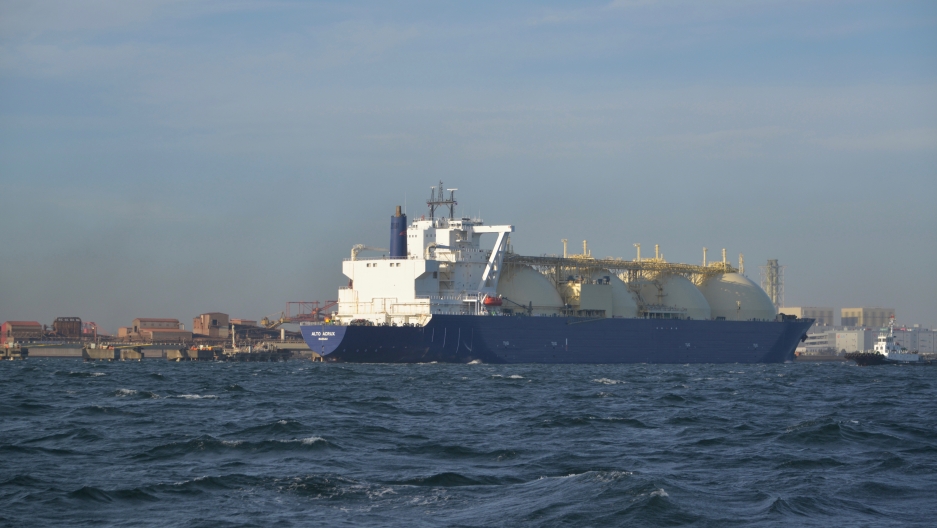 An LNG tanker unloads its cargo at the Port of Yokohama, Japan.

At the busy Port of Yokohama, near Tokyo, large oceangoing vessels carry new cars from Japanese factories to a global market. But one product the Japanese have always had to import is energy, and it’s clear from the port traffic how much energy the country needs. Tankers full of coal, liquefied petroleum gas and liquefied natural gas, or LNG, sail into the harbor from all over the world.

More and more of that energy originates in the US. A boom in shale gas drilling in places like Texas and Pennsylvania has created a glut of domestic natural gas. That means even before the COVID-19 virus disrupted the energy markets in the past months, prices were at an all-time low. Producers eager to find new markets now ship gas overseas. And that has helped make the US the third-largest natural gas exporter in the world. And Japan is one country that has increased its imports of US shale gas. 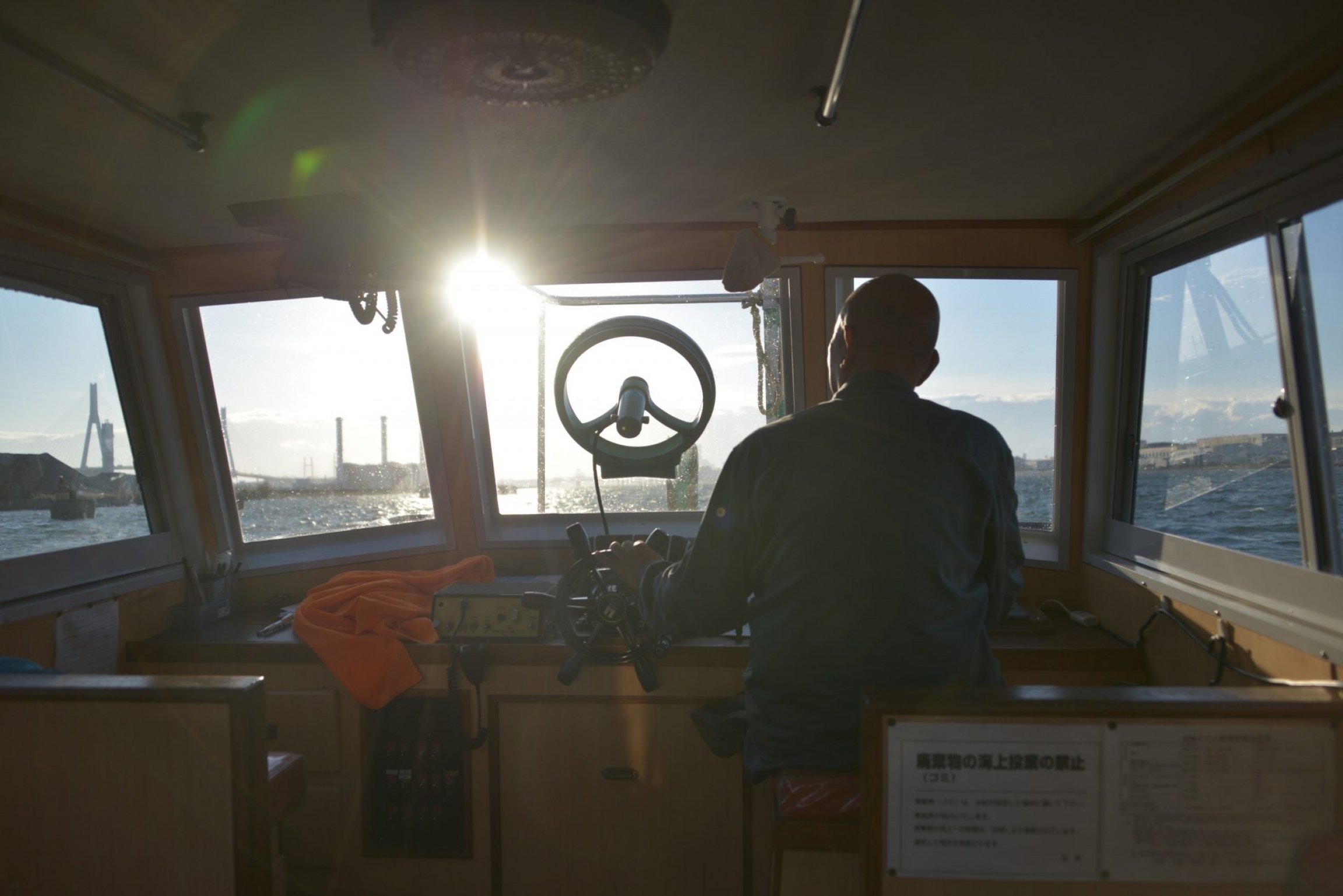 The view from a boat in Tokyo Bay frames a plant that turns liquefied natural gas back into methane gas.

Nine years ago, on March 11, 2011, Japan’s energy landscape suddenly transformed when the massive Tohoku earthquake and subsequent tsunami killed an estimated 22,000 people and led to a meltdown at the Fukushima Daiichi nuclear power plant. About half a million residents fled the radiation; some never returned to their homes.

Japan shut down its nuclear power plants in the wake of that disaster, which meant the source of one-third of the country’s energy production quickly vanished. New imports helped make up for the loss. US exports of coal to Japan increased and the amount of electricity generated from natural gas jumped 50% in the wake of the disaster. Japan has long been the world’s largest importer of natural gas, and the newly abundant US shale gas wells provided a solution to the sudden loss of nuclear energy.

“After 2010, everybody, including the Japanese government and industry, realized the significance of the shale revolution in the United States,” said Ken Koyama, chief economist and managing director at the Institute of Energy Economics in Japan.

Japan has little natural resources of its own and must import its fossil fuels. Energy security is key for Japan, says Koyama. The country is still dependent on Middle East oil.

“That’s a critical challenge,” Koyama said. “LNG is an important source of diversification for us.”

Since the shutdown of all 54 nuclear reactors in 2011, nine reactors at five power plants have come back online. The mild winter, along with the coronavirus outbreak has depressed global LNG prices worldwide. But analysts say exports are expected to increase in the longterm.

Koyama says as long as the price remains competitive, he thinks LNG imports from the US to Japan will continue to increase.

Tokyo Gas led the way with LNG back in 1969, when it began importing fuel from Alaska to help fight air pollution in Japan’s industrialized cities. Takuro Yamamoto, deputy general manager of gas resources for Tokyo Gas, says US shale gas has changed the global market.

Related: WHO says the coronavirus is now officially a pandemic

“The US is [now] a very important market in terms of LNG,” Yamamoto said. “The US market is just gigantic.”

The company imported 14.2 million tons of LNG in 2017, mostly from Australia and Malaysia, but also from Qatar, Brunei and Russia. Now, Pennsylvania shale gas flowing through a newly transformed LNG export terminal in Lusby, Maryland. 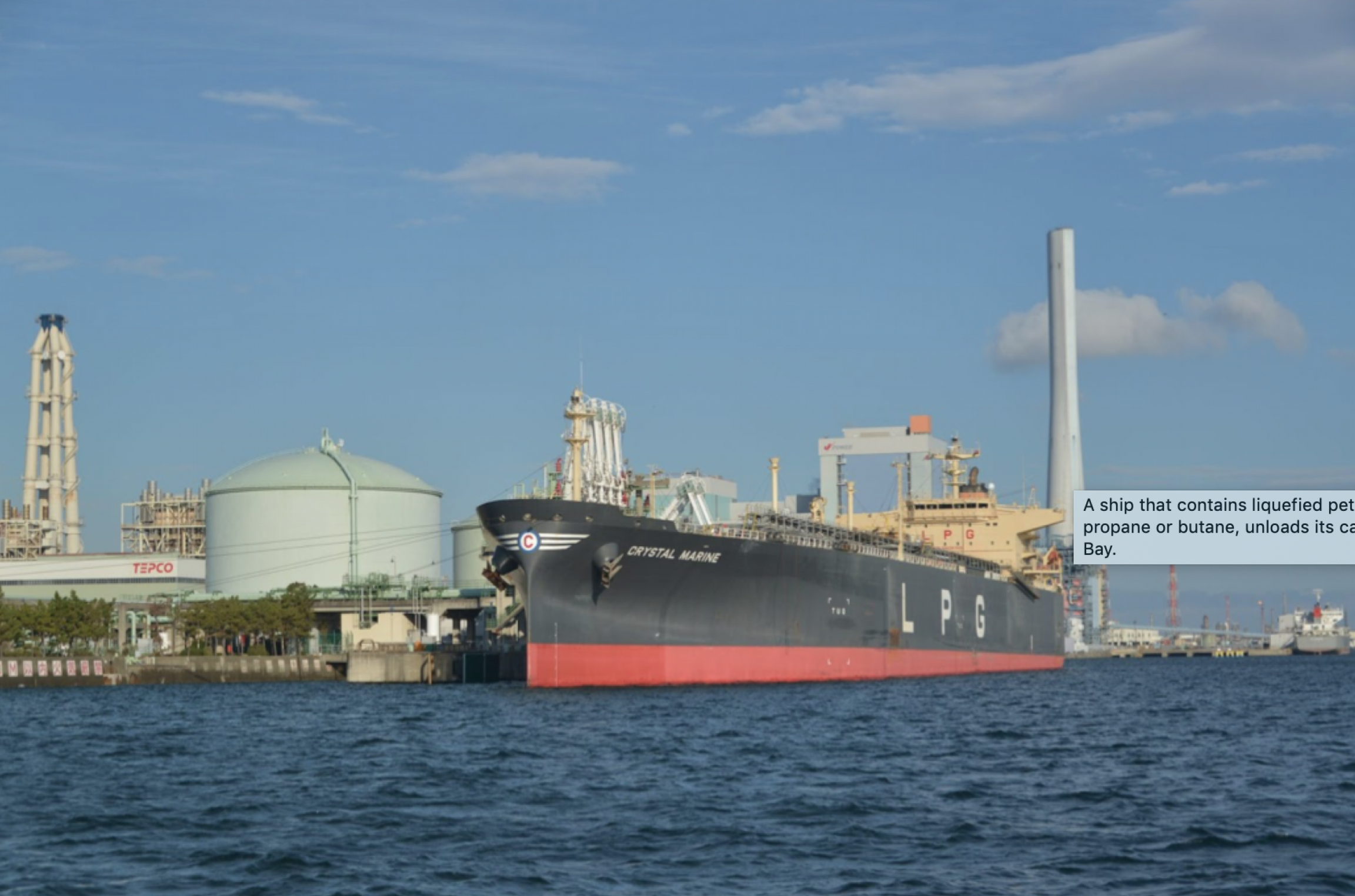 A ship that contains liquefied petroleum gas, or propane or butane unloads its cargo in Tokyo Bay.

Tokyo Gas helped finance the transformation of Dominion’s Cove Point plant from an import facility to an export terminal. Pennsylvania’s gas is so abundant and cheap, it makes sense to ship it through the Panama Canal to the Asian market. Yamamoto said Tokyo Gas has also invested in an export facility in Texas and a natural gas power plant in Pennsylvania.

“This is our overall strategy,” he said. “It’s very simple. What we’re trying to do is diversify.”

Another advantage of importing US gas is the more flexible contracts that allow importers to resell the gas on the international market.

“So, now we can swap around the cargo, this is a very important thing,” Yamamoto said. “We can make a profit [if it’s bought at] a higher price point.”

Recently, the collapse of LNG prices on the global market has meant canceling some planned shipments from export terminals on the Gulf Coast, or at the Cove Point terminal on the Chesapeake Bay. But as an indication of how Japan is planning for the long haul, this fall, the Japanese government committed $10 billion in public and private money to build new gas export facilities worldwide.

Since spring 2018, shale gas from Pennsylvania has been shipped out of Cove Point to 20 different countries. Most of those ships went to Japan. 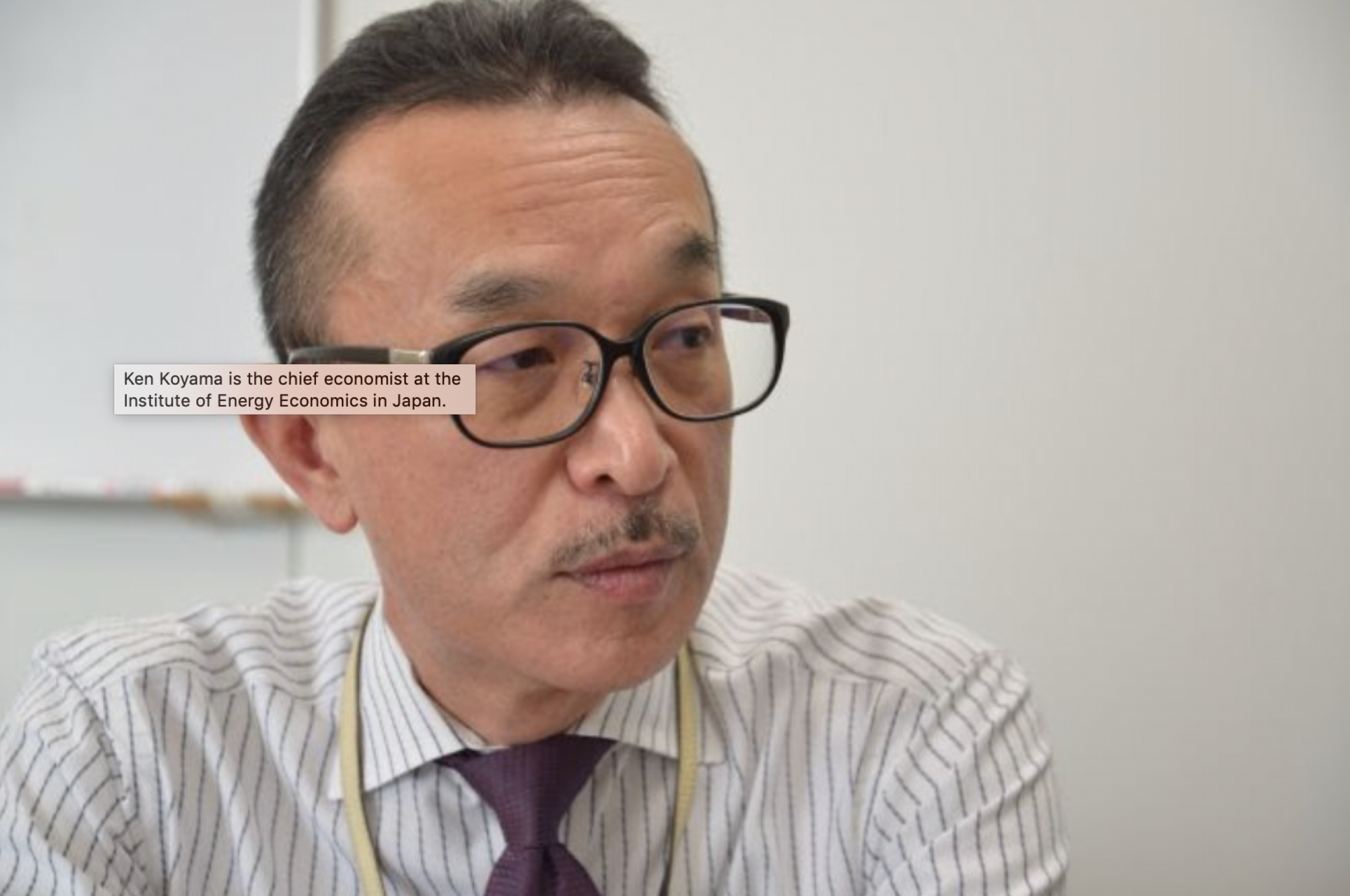 Ken Koyama is the chief economist at the Institute of Energy Economics in Japan.

“We’ve got the cheapest gas in the world,” Harbert said. “And we’re trading all over the world. Every molecule that we can export that supplants the mullahs of Iran is a good day for America.”

The drilling of Pennsylvania’s Marcellus and Utica shale has created a glut of natural gas and driven down prices. In the past 12 years, shale gas producers tapped more than 12,000 fracked gas wells in northeastern, central and southwestern Pennsylvania. The price of that overproduction means Pennsylvania’s gas is now selling at less than $2 per mmBtu. In 2008, before the shale gas boom, domestic natural gas prices averaged almost $9 per mmBtu.

Ira Joseph, head of gas and power analytics of S&P Global Platts, said there’s been an “unprecedented surge” in new supplies of LNG in 2019.

“In the case of the Northeast, the Marcellus and Utica, it’s a constant fight to support price,” Joseph said. “Production has gone up so much that to push gas out of the region, it’s been a constant battle to create new pipeline capacity, and reverse existing pipeline capacity to create demand for the gas.”

Exports won’t necessarily force the price back up to 2008 levels, Joseph said, but they could prevent further dips. Five new LNG export terminals have come online since 2016. Another 16 have been approved and eight are pending approval by the Federal Energy Regulatory Commission, or FERC.

The United States is now the third-largest LNG exporter, behind Qatar and Australia. 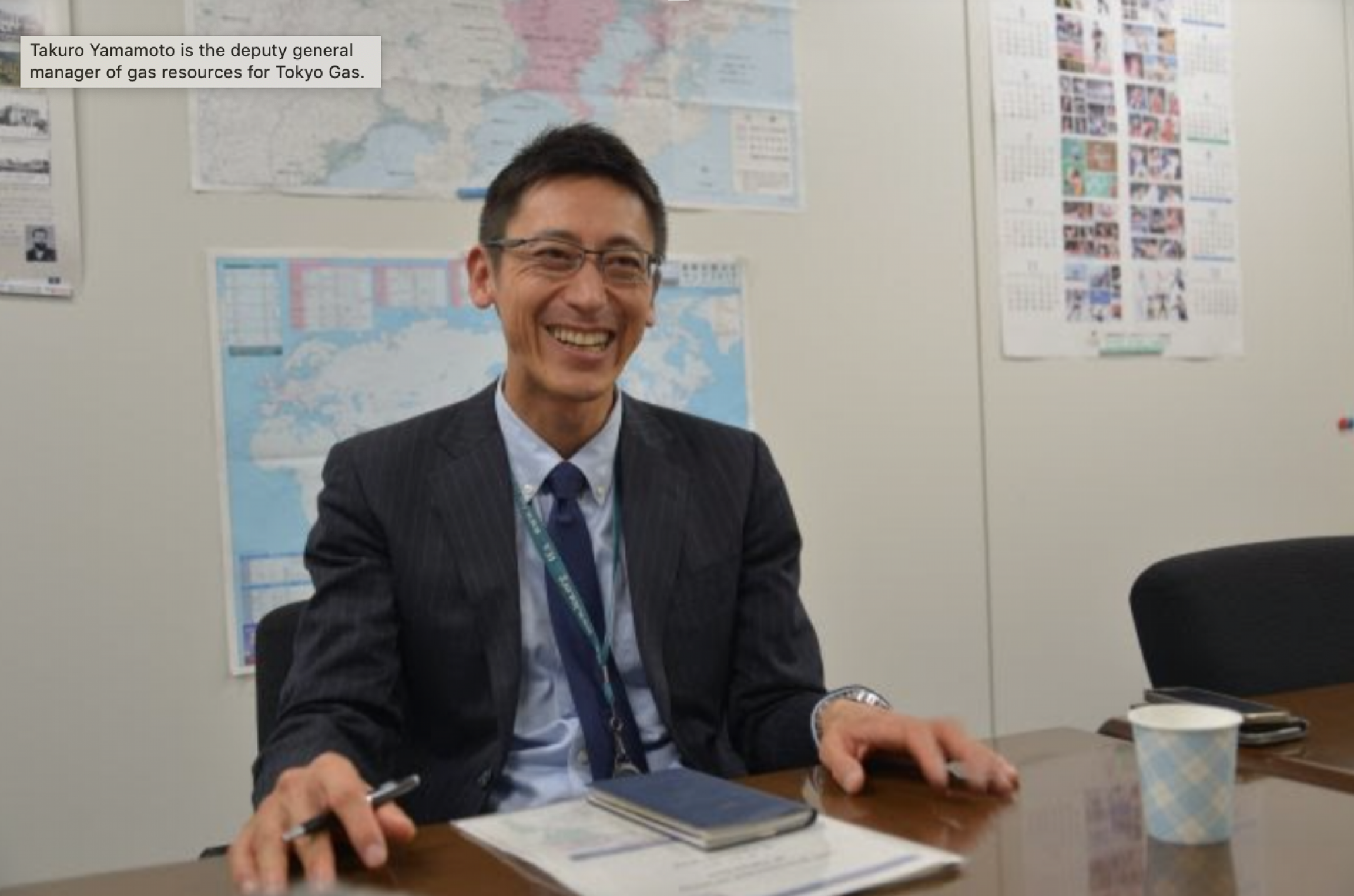 Takuro Yamamoto is the deputy general manager of gas resources for Tokyo Gas.

But not everyone is happy about the pipelines that feed those exports.

Before the gas gets to Japan, it has to travel through forests, backyards and farmlands, like Deborah and John Swanson’s cornfield in Conestoga, Lancaster County.

The newly built Atlantic Sunrise pipeline starts in Susquehanna County — site of some of the most productive gas wells in the state. In Lancaster County, it meets up with an existing interstate pipeline that can carry the gas to an export terminal.

Like a lot of landowners along pipeline paths, the Swansons didn’t want to sell their land, but they quickly learned they had no choice.

“We took it to court in Philadelphia, and we fought it as long as we could,” John Swanson said. “But you don’t fight the federal government and win.”

FERC gave the pipeline company Williams eminent domain power. Williams says the Atlantic Sunrise pipeline is a utility because it serves the domestic market. But it was also built to help Pennsylvania gas flow to a burgeoning export market.

Dominion’s Cove Point liquefaction plant and export terminal sits on a spit of land jutting out into the Chesapeake Bay. A nearby lighthouse built in 1828 sits along the beach nearby. A network of 32-inch pipes surrounds large white cylindrical tanks. It’s here that the gas is cooled to minus-260 degrees Fahrenheit — the point at which it becomes a liquid — so it can be loaded onto a ship.

Sumitomo Corp., a Japanese trading company, and its US affiliate Pacific Summit Energy helped foot the almost $4 billion bill to convert Cove Point to a natural-gas export terminal. Cabot Oil & Gas, a Texas company that has wells in northeast Pennsylvania, contracted with Sumitomo, Tokyo Gas, and Kansai Electric to sell 350,000 million British thermal units of Marcellus Shale gas per day for 20 years. The plant, owned and operated by Dominion Energy, has a capacity of 5.25 mtpa (million tons per annum), which is about 1% of the nation’s current natural gas production.

The US affiliate of India’s GAIL Ltd. also has signed 20-year service agreements to purchase natural gas shipping out of Cove Point.

Because of the flexible contracts, the gas that has run through the Atlantic Sunrise pipeline since it came into service last spring could very well have ended up in Europe or South America.

“We don’t like it running beneath our feet, no matter what,” John Swanson said.

The path of the pipeline beneath the Swanson’s land is easy to spot — the soil is compacted and light brown, and the corn that grows on top of it is shorter than all the rest.

To make matters worse, the Swansons say, they didn’t get the true market value for the land they were forced to sell.

“You learn an awful lot by the time you’ve gone through it. And one of the things you really learn is the government does not look out for its people,” he said.

This story was originally published by State Impact Pennsylvania.

Reporting for the story was made possible with a grant from the International Center for Journalists.