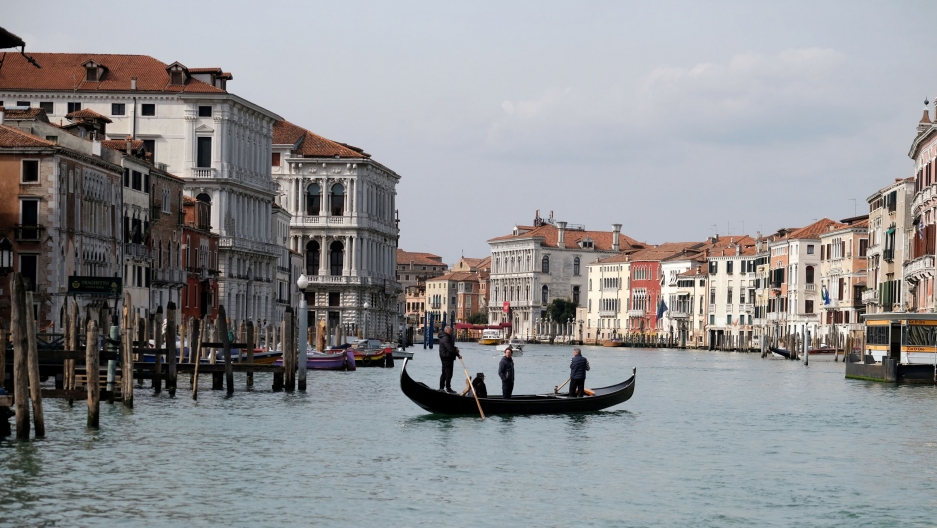 The Grand Canal is seen after the Italian government imposed a virtual lockdown on the north of Italy including Venice to try to contain a coronavirus outbreak, in Venice, Italy, March 9, 2020.

Editor's note: At the time of this interview, only the northern region of Italy was on lockdown.

The entire country of Italy was put on lockdown late Monday as the Italian government tried to halt the spread of COVID-19. Earlier in the day, Italy's northern region — home to some 16 million people — were being told to stay put.

Faced with Europe's worst outbreak of the coronavirus, the government also ordered cinemas, theaters and museums to close, canceled sporting events and told shops and restaurants to ensure that patrons remained at least one yard apart.

The measures adopted by decree on Sunday extended measures including school closures that were imposed after the coronavirus emerged in a small town outside Milan, the financial capital, last month.

The number of recorded cases jumped by 24% over the past 24 hours to 9,172 while the number of deaths rose 26.5% to 463, putting Italy's health system under massive strain.

In Milan, public transport was working but the streets were much quieter than normal, with many smaller shops and cafés closed. Even among those left open, most remained empty, meaning any requirement to maintain a distance of at least a yard between customers was purely theoretical.

"There's been nobody at all. I've never seen anything like it," said a shop assistant at the Rinascente department store in the city center.

It was a similar story in Rome, even though the Italian capital is not under lockdown, unlike much of the north.

"If it carries on like this I will go out of business," said Franco Giovinazzo, who runs Spazio Caffe in central Rome, after selling just six coffees in the normally busy breakfast period.

Alessandro Vespignani is a researcher at Northeastern University who models the spread of infectious diseases. He's been studying how China's early travel restrictions in Wuhan affected the spread of the virus worldwide.

"What we see from China is that travel restriction can be important to buy time so they can slow down the importation of cases and then start later the epidemics in other places in the world," Vespignani said. "However, they are not enough alone. So, we also need to curb the epidemic, to have mitigation in the local community. So, we need to lower the transmissibility of the disease."

Vespignani spoke with The World's Marco Werman about containing the virus.

Marco Werman: Would the world look different now if those restrictions in China had not been in place?

Alessandro Vespignani: Oh, yes. For sure we would have epidemics, large epidemics in more countries and more places within the countries. We had three weeks or four weeks, with less activity and no transmissions internationally. And that has allowed the community to prepare and to develop contingency plans for when the epidemic will start.

Other countries now are starting to do the same as China. Italy, for instance, has a very large epidemic at the moment and is going into a lockdown like China. I think several European countries, might follow those mitigation interventions. In the United States, we have to be prepared to see activities rising internally as well because we had importation of cases and we had some transmissions of the disease. So, actually what we are seeing now in Europe will probably happen in some parts of North America, and then more generally, globally.

Related: Travel bans are not the best way to contain coronavirus, expert says

So are you saying the United States needs to take this much more seriously and follow what Europe is doing?

It will depend on how vast the number of chains of transmission that have generated cases in the US. And I think it will be more clear with further testing of cases and the more capacity that the states are acquiring at the moment to identify and detect cases. It's obviously a possibility that in some places we will have to cope with some level of inconvenience, in a sense, in terms of some level of social distancing measures that help to mitigate the epidemic, as we are seeing in some European counties.

Have you seen travel restrictions backfire, like an interruption in the flow of necessary medical equipment, things like that?

That's one of the risks, especially if you extend that too much — if you start to destroy the supply chain. And for certain countries that are especially the countries that generally are the more poor countries in the world, that is a big problem. All the measures and containment measures that we put in place in containing or mitigating an epidemic have a cost. And you don't want to disrupt completely the social and economic fabric of a country. That's another important point that should be a factor in the decision-making process.

Alessandro, you're from Rome, but I know you've got family in northern Italy. How are they doing right now? Are they in lockdown? Have you spoken with them?

They are unfortunately in lockdown. And the situation is quite serious there because the healthcare system is basically at capacity. And if the epidemic continues to grow, they will have to make really very tough decisions — like, really, who to admit to hospitals or not, depending on very — how to say — elements like, you know, people who have a life expectancy that is longer. And so, you know, this is really something that is is worrisome there. At the same time, they are pursuing very aggressive interventions. And I hope that in the next few days we will see a decline in the epidemic there. This has been successfully done not just in China, but also in South Korea, in Singapore, in Hong Kong. So I hope that that will happen in Italy.