Students all over Italy were heading home from school when the news started trickling in Wednesday. Reaching for their phones, they checked social media and refreshed news websites.

A rumor was going around, and people started asking each other if it was true: “Chiudono le scuole?”

Finally, children up and down the country erupted in celebration. It was official: The government was ordering the closure of all schools and universities across Italy until at least March 15. In the streets of Rome, at bus stops and in the metro, kids hugged each other, high fived and sang triumphant little songs.

But this is not a normal holiday. The nationwide closure is one in a series of strategies the Italian government put in place to contain the spread of COVID-19, which in Italy has infected almost 5,000 people. As of Friday, the disease caused by the novel coronavirus had killed 197 in the country in what is by far Europe’s worst outbreak.

The drastic measures are an indication of how serious the situation has become. Several towns in Italy's northern regions, which are the worst hit by the outbreak, have been on complete lockdown since February, and most schools there have been closed for weeks. Hospitals in the area are stretched to their limit, with medical workers being called out of retirement and student nurses graduating early in an effort to handle the influx of patients.

“The health system risks being overloaded, and we will have a problem with intensive care if an exponential crisis continues,” said Giuseppe Conte, Italy’s prime minister. “We wanted to adopt all possible measures to either directly contain the virus, or slow down its spread,” he added regarding the decision to close schools and universities.

But school closures will have a profound impact on families. “Those who cannot count on relatives to look after their children will have to take time off work, meaning a drop in productivity across all of Italy and enormous economic repercussions,” according to Codacons, Italy’s most important consumer association.

Magda Vanzo is already feeling the repercussions. She runs an ice cream and cake shop in Cilavegna, Lombardy, one the first regions to register multiple cases of COVID-19.

it’s a bit useless, because parents have to find things to do with the kids during the day, and they end up being in crowded places anyway.”

“It will get really difficult if it goes on any longer,” said Vanzo, 33. Her twin children, who are almost 4 years old, have been home for more than two weeks, and her partner has had to take time off work to look after them. “I understand why they had to close the schools, but I think it’s a bit useless, because parents have to find things to do with the kids during the day, and they end up being in crowded places anyway,” she said.

Vanzo's ice cream shop has been especially busy since schools were closed, she said.

Patrizio Lilli, 47, is facing a similar situation. He works as a public servant in Rome and cannot take time off work. And while his wife Francesca may be allowed to work from home next week, for now she has to go into the office and leave the children at home.

“The kids see their friends anyway, so what’s the point?”

“They are 16 and 12, so it’s okay to leave them alone for a few days. But I won’t know what to do if this goes on,” Lilli said. He thinks the measures are overly extreme and won’t help to contain the virus. “The kids see their friends anyway, so what’s the point?”

His wife, on the other hand, said she thinks closing schools was a brave and necessary step, but that families will need support to cope.

The government has announced it is making €7.5 billion (around $8.5 billion) available to help families and companies deal with the economic fallout.

In a decree that took effect Thursday, the Italian government announced that all sporting and cultural events would be suspended. Authorities also urged elderly people to stay home as much as possible, in an attempt to protect them from the virus. But the emergency school closure has had almost the opposite effect, as nonni, or grandparents, have had to step up and shoulder the responsibility for childcare.

The minister for equal opportunities and families, Elena Bonetti, said she is considering using some of the government funds to support families by providing reimbursement for childcare and unpaid leave from work.

“Grandparents, who are so precious to the welfare of our society, must be protected. [These measures] will avoid too much infection between children and grandparents,” she added. 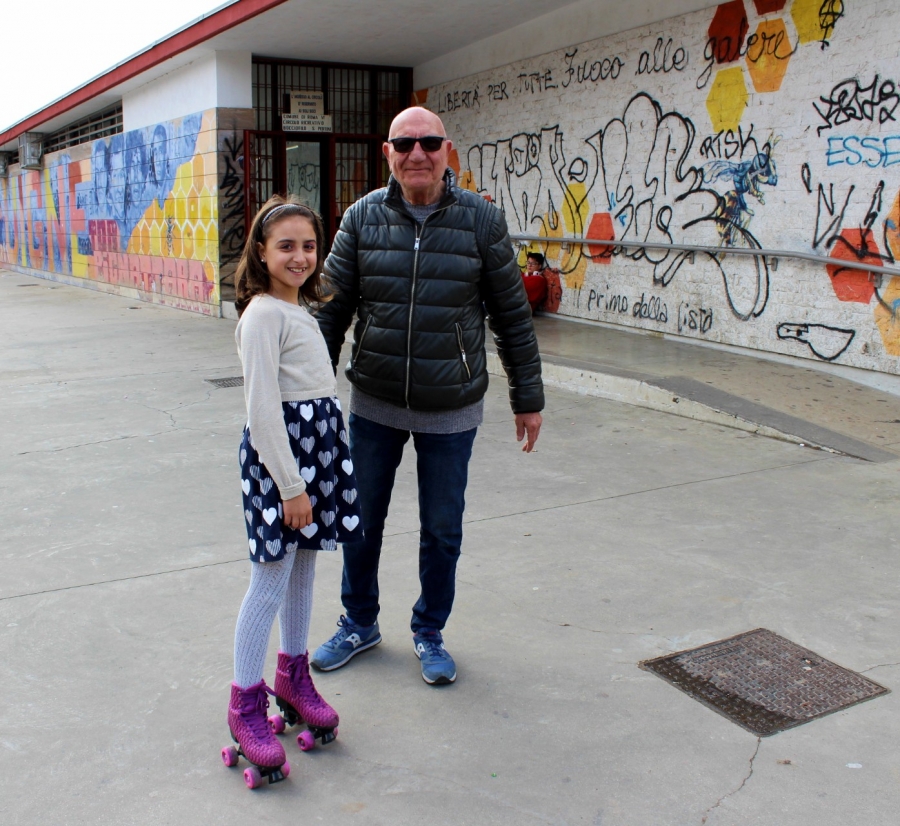 Still, some grandparents are filling the gap for now. Raffaele Tempesta is 71 and retired, but for the next few weeks he will have the “full-time job” of looking after his two grandchildren, 10-year-old Alessia and her 9-year-old brother Federico. “Both their parents work and can’t take time off or pay for a babysitter, so it falls on us. There’s not much we can do about it,” Tempesta said.

Taking the opportunity to practice her skating in a Roman park, Alessia said being off from school is “bellissimo.”

But she does worry about her grandfather. “My friends and I all play together, so I think this is going to help the disease spread. It would be really bad if my grandad got it,” Alessia said.

Related: Travel bans are not the best way to contain coronavirus, expert says

Alberto Giubilini, a researcher in the program for Collective Responsibility for Infectious Disease at the University of Oxford, said the situation in Italy is complicated by the fact that there is so much uncertainty about the virus and how far it has already spread. “The government is adopting a ‘better safe than sorry’ approach, choosing to impose the most extreme measures. I think it is justified in this case, even though it will be disastrous for many families and for the economy. But the priority right now is public health, so even harsh measures are justified,” he said.

But, he added, it is also the country’s responsibility to safeguard the rights of its citizens, especially those who are forced into quarantine, or those who have to take time off work or pay for childcare while schools are closed.

"These people are not necessarily responsible for carrying the disease, but they pay the price.”

“The government should invest money into compensating the victims of these measures, even if this will worsen the financial crisis already caused by the virus," Giubilini said. "But if it does not, it is just using people as mere means to an end, which is not ethically acceptable. These people are not necessarily responsible for carrying the disease, but they pay the price.”

The toll on education is a heavy one too, teachers told The World.

“It couldn’t have happened at a worse time during,” said Stefano de Felici, a high school science teacher in Frascati, a town just south of Rome. “We were working in full force to get things done before the Easter holidays, and now everything has had to stop, and we don’t know how we’ll catch up.”

De Felici and other teachers have been going into work in an effort to organize online classes, but in a country where online learning is far from the norm, he’s not sure how well it will work.

“We are trying, but not everyone knows how to use the platform, and some students don’t have computers," he said. "I’m afraid that some will just take this as a holiday.”