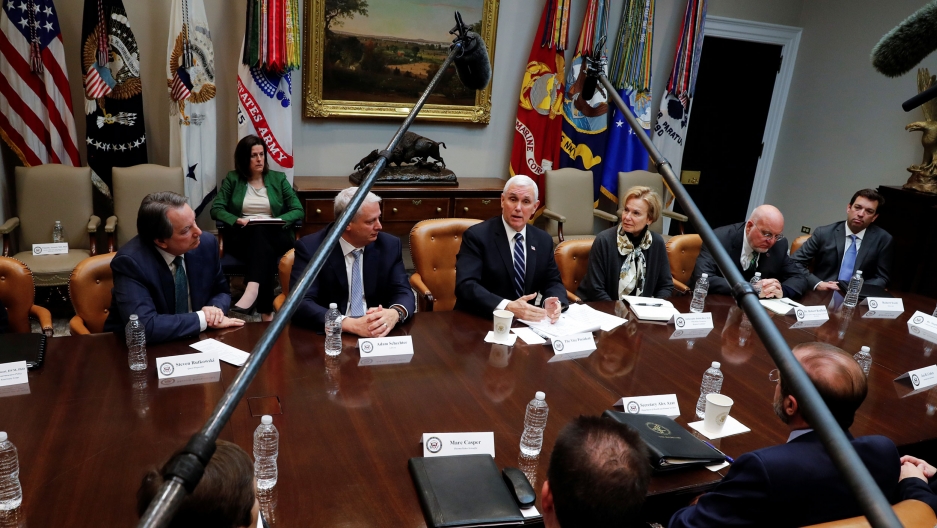 US Vice President Mike Pence speaks during a coronavirus briefing with diagnostic lab CEOs in the Roosevelt Room of the White House, March 4, 2020.

The US death toll from coronavirus infections rose to 11 on Wednesday as new cases emerged around New York City and Los Angeles, while Seattle-area health officials discouraged social gatherings amid the nation's largest outbreak.

The first California death from coronavirus was an elderly person in Placer County, near Sacramento, health officials said. The person had underlying health problems and likely had been exposed on a cruise ship voyage between San Francisco and Mexico last month.

It was the first coronavirus fatality in the United States outside of Washington state, where 10 people have died in a cluster of at least 39 infections that have emerged through community transmission of the virus in two Seattle-area counties.

Although the Placer County patient who died was not believed to have contracted the virus locally, that case and a previous one from the San Francisco Bay Area linked to the same ocean liner have led health authorities to seek other cruise passengers who may have had close contact with those two individuals.

Hours after the person's death was announced, California Governor Gavin Newsom declared a statewide emergency in response to the coronavirus, which he said has resulted in 53 cases across the nation's most populous state.

"The State of California is deploying every level of government to help identify cases and slow the spread of this coronavirus," Newsom said in a statement.

Newsom said the cruise ship, named the Grand Princess, had later sailed on to Hawaii and was returning to San Francisco, but would not be allowed into port until passengers had been tested for the virus.

"We are holding that ship off the coast," Newsom said.

Six new coronavirus patients were confirmed in Los Angeles County, public health officials said on Wednesday. One was a federal contractor who may have been exposed while conducting medical screenings at Los Angeles International Airport, the US Department of Homeland Security reported.

Three others likely were infected while traveling recently to northern Italy, one of the areas hardest hit in the global outbreak. Of the six in Los Angeles County, only one has been hospitalized. The other five are recovering in home isolation.

The greater Seattle region represents the biggest concentration of cases detected in the United States from a virus that has killed more than 3,000 people worldwide, mostly in China, where the epidemic originated in December.

With most of the Seattle-area cases not linked to travel or exposure to people who might have been infected abroad, that means the virus has gone from being an imported phenomenon to taking up residence in Washington state, health officials say.

At least 18 cases, including six deaths, were connected to a long-term nursing facility for the elderly, called LifeCare Center of Kirkland, in a Seattle suburb.

Iran will keep schools and universities closed for another two weeks and check up on people in the worst affected areas by telephone, the health minister said on Thursday, after concerns were raised an earlier plan for home visits could spread the disease.

The country, which has one of the highest numbers of fatalities outside China, will keep academic institutions shut until the end of the Iranian calendar year on March 20, Minister Saeed Namaki announced on state television.

In the past 24 hours, 15 more people had died, bringing the total deaths to 107, ministry spokesman Kianush Jahanpur said. There were 3,513 confirmed cases in all, up by 591 from the day before.

Number of cases in Germany grow

The number of confirmed coronavirus cases in Germany jumped by 109 within a day, a public health institute said on Thursday.

As of Thursday morning, there were 349 cases spread across all but one federal state, up from 240 on Wednesday morning and compared with 262 on Wednesday afternoon, the Robert Koch Institute said.

The hardest-hit state is the western region of North Rhine-Westphalia, Germany's most populous, with 175 cases.

Back in the US, Seattle health authorities urged a number of measures for curbing further spread of the disease, including recommendations for anyone aged 60 and older and individuals with underlying chronic health problems or compromised immunity to stay home and away from large gatherings and public places.

They also urged companies to allow their employees to work from home as much as possible, stagger shifts to ease commuter congestion on public transportation and avoid large work-related gatherings.

"The distancing measures that we're recommending are essential because we need to slow the spread of the disease to the point where we are able to continue to handle the load," said Patty Hayes, the public health director for Seattle and King County.

A growing number of US companies are adopting such steps. On Wednesday Microsoft asked its employees in the Seattle region near its headquarters and in the San Francisco Bay Area to work from home if possible until March 25.

In New York state, the number of cases rose to 10 on Wednesday. Three family members and a neighbor of a lawyer who was previously identified as infected tested positive. The neighbor's wife and three of his children have also contracted the virus, Governor Andrew Cuomo said.

About 1,000 people in suburban Westchester County, where the two families live, were under self-quarantine orders because of possible exposure, Cuomo said.

"We are, if anything, being overcautious," he said.

AIPAC, the pro-Israel lobby, said Wednesday that people in a group from New York that attended its 18,000-person policy conference in Washington, DC, this week potentially had been in contact with an individual who contacted the coronavirus before the conference.

US lawmakers reached bipartisan agreement on an $8.3 billion emergency bill to help fund efforts to contain the virus. The bill garnered enough votes to pass in the House of Representatives.

More than $3 billion would be devoted to research and development of coronavirus vaccines, test kits and therapeutics. There are currently no approved vaccines or treatments for the fast-spreading illness.

The administration is working to allow laboratories to develop their own coronavirus tests without seeking regulatory approval first, US Health Secretary Alex Azar said.

The latest data from the US Centers for Disease Control and Prevention listed 129 confirmed and presumed cases in the United States, up from the previous 108. They were 80 reported by public health authorities in 13 states plus 49 among people repatriated from abroad, according to the CDC website.

Those figures do not necessarily reflect Wednesday's updates from three states.

By Steve Gorman and Dan Whitcomb/Reuters