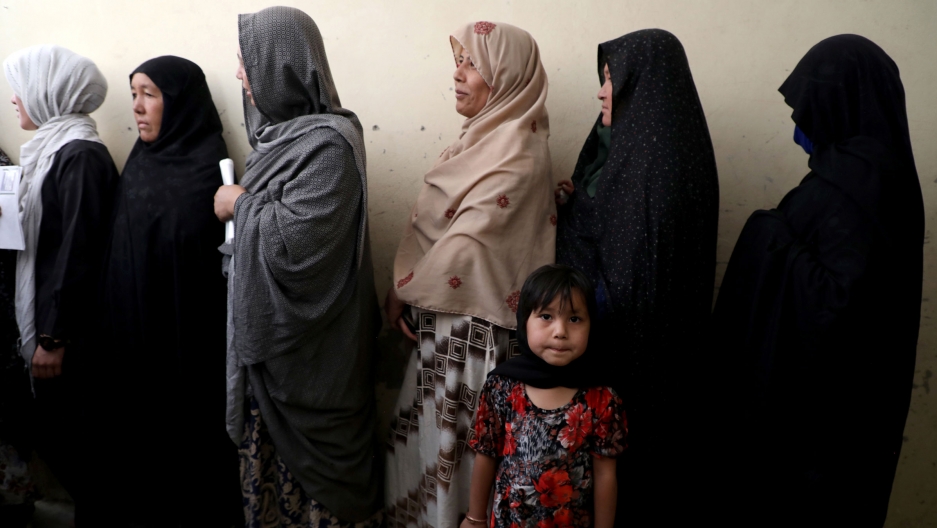 Afghan women line up at a polling station as they wait to cast their votes in Kabul, Afghanistan, on Sept. 28, 2019.

This is a moment of both fear and hope for Afghan women — and an urgent time for the world to support their hard-won rights. The Feb. 29 deal between the US and the Taliban could pave the way for a peace that Afghans desperately seek. But there are huge risks for women’s rights in this process.

Women have suffered deeply during Afghanistan’s 40 years of war, and they desperately long for peace. They have also fought ferociously for equality in the years since the fall of the Taliban government and have made great progress. Today there are women ministers and governors and judges and police and soldiers, and Afghanistan’s parliament has a higher percentage of women than does the US Congress.

But Afghan women’s rights activists have faced resistance from the Afghan government — and lack of support from international donors — as they fought for their rightful place at the negotiating table for peace talks. This exclusion, combined with the Taliban’s relentless discrimination against women and girls, increases fears that women’s rights could easily be a casualty of this process.

The US-Taliban deal is focused on foreign troop withdrawal and preventing Taliban support for international terrorism attacks. It also triggers “intra-Afghan” talks between the Taliban, the Afghan government, and other factions, which are slated to start March 10. But women’s rights were not included in the Feb. 29 deal. Zalmay Khalilzad, the lead US envoy to the talks, repeatedly said that women’s rights — and other issues relating to human rights, political structures and power sharing — should be resolved through the subsequent intra-Afghan talks. This has been a source of frustration to activists.

The Taliban remain deeply misogynistic. Their 1996 to 2001 regime was notorious for denying women and girls access to education, employment, freedom of movement and health care, and subjecting them to violence including public lashing or execution by stoning. Taliban rhetoric and conduct has moderated somewhat in subsequent years, with some Taliban commanders permitting girls to attend primary schools, typically in response to community pressure. But the Taliban also continue to carry out violent attacks against girls’ schools and block women and girls from exercising many of their basic rights, and remain deeply opposed to gender equality.

In February, a Taliban leader wrote, “[W]e together will find a way to build an Islamic system in which all Afghans have equal rights, where the rights of women that are granted by Islam — from the right to education to the right to work — are protected.” Skeptics noted the comma separating women from equal rights, and that from 1996 to 2001 the Taliban also argued that women were enjoying all rights “granted by Islam.”

Related: Analysis: Why the US is to blame for its own defeat in Afghanistan

The Afghan government has been an unreliable supporter — and sometimes even an enemy — of women’s rights. The administrations of both Afghan President Hamid Karzai and Ashraf Ghani have frequently brushed aside women’s rights. Both have mostly rebuffed activists’ demands for women to have full participation in the peace process, as provided under United Nations Security Council Resolution 1325. Foreign donors have been more willing to engage in photo ops and grant agreements than to expend political capital to press for Afghan women to be in the room, at the table, during negotiations.

Lack of clarity about the intra-Afghan talks and the designated negotiators has further heightened fears about the implications for women’s rights. Political infighting following the disputed Afghan presidential election has delayed the appointment of the government negotiation team. Pressure to divvy up these roles among power brokers threatens to squeeze women out. The absence of clear information about what country will host the talks and who will facilitate them prevents women’s rights activists from lobbying for including women.

A fight over whether a release of prisoners will move ahead is muddying the waters further and calling into question the timeline for the intra-Afghan talks. Meanwhile violence, reduced ahead of the deal’s signing, threatens to escalate again.

But protecting women’s rights needs to be one of the key objectives of this process, and for that to happen, women need to be at the negotiating table. Governments increasingly recognize that the role of women in peace processes is not just an afterthought, but critical to sustainable and implementable peace accords. The Afghan government and all its international partners need to back Afghan women, who are in the fight of their lives.