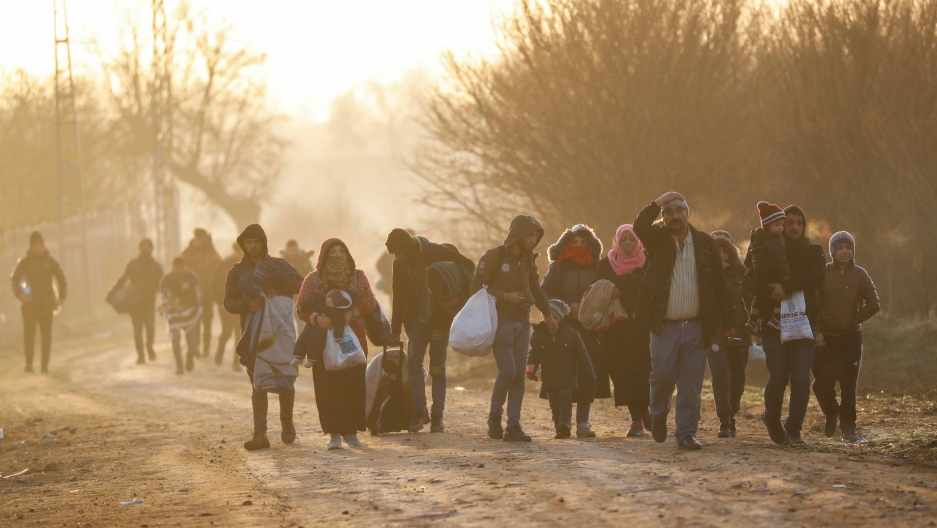 Migrants walk next to the Turkey's Pazarkule border crossing with Greece's Kastanies, near Edirne, Turkey, March 3, 2020.

Some 10,000 migrants have been trying to breach Greece's border since Turkey said last week it would no longer uphold a 2016 accord with the European Union to keep refugees on its territory in return for billions of euros in aid.

Now Greek troops and riot police are on high alert on Tuesday along the land border between Greece and Turkey, which has become a main flashpoint in an escalating row between the EU and Ankara over how to deal with a new wave of migrants and refugees.

Greek authorities said the border was quiet on Tuesday, in contrast to the clashes seen over the weekend and into Monday, when police used tear gas against migrants, including women and children, stuck in the no-man's land.

"There were only a few attempts today (by migrants to cross the land border). Let's hope they get the message," a machine gun-toting army officer told Reuters near the Kastanies border crossing.

Army jeeps patrolled the area, and roads leading to the Evros river which marks the Greek-Turkish border remained shut.

Further south, Greece's marine border with Turkey in the Aegean Sea was also calmer on Tuesday due to choppier seas, a police source said, after nearly 300 migrants arrived on the Greek islands by boat on Monday.

A Syrian boy died on Monday after he and 47 others were plucked from the sea when their boat capsized. He was the first reported fatality since Turkey opened its border.

"Greece's borders are also Europe's borders," said Greek Prime Minister Kyriakos Mitsotakis as he made an inspection tour of the area on Tuesday.

The presidents of the executive European Commission, the European Council — which represents national governments — and the European Parliament were due to join Mitsotakis later on Tuesday in a show of solidarity with Greece.

The United Nations High Commissioner for Refugees urged more EU support for Greece and also said countries should stop "bickering" and look at the root causes of the displacement.

"Greece is an EU member so its primary source of support is European resources," Filippo Grandi said in Geneva. "Greece needs more of that. That is very clear."

European leaders are desperate to avoid a repeat of the 2015-16 crisis, when more than a million migrants entered the EU from Turkey via the Balkans, straining European security and welfare systems and boosting support for far-right parties.

The mood toward migrants on Greek islands such as Lesbos — once relatively welcoming — has soured since the 2015-16 crisis amid a sense that the Athens government and the EU are not providing sufficient support.

"It used to be the island of solidarity but it seems like the locals are exhausted," said Charlie Meyers, a US aid worker on Lesbos.

Turkey, which already hosts 3.7 million refugees from Syria's civil war and faces another big influx after an escalation of fighting there, has said it cannot take in any more migrants.

By Lefteris Papadimas and Alkis Konstantinidis/Reuters