The first time immigration attorney Christina Brown saw her client’s face was the first time they appeared in court together in January — and even then, the two women weren’t in the same room. Brown’s client, Alicia, an asylum-seeker from Honduras, stood in a converted shipping container on the Mexican border. After being forced to wait for her US court date in northern Mexico, Alicia had come back to the border crossing, where US officials ushered her into a makeshift “tent court” connected to the US point of entry in Laredo, Texas. From there, a camera broadcast Alicia’s fuzzy image onto a video-conferencing screen 150 miles away in San Antonio’s immigration court, where Brown stood before a judge who would decide Alicia’s fate.

When Alicia spoke, Brown recognized her shaky voice: The two had spent months building Alicia’s asylum case over the phone. “She had to tell me about terrible domestic violence, and terrible sexual assaults, and rape, and beatings, all over the phone,” said Brown, who directs her own immigration law office in Denver, Colorado. “Can you imagine how hard it is to ask someone to talk about the worst details of their lives if you’ve never been able to look into their eyes, never been able shake their hand?”

Alicia, who requested The World use a pseudonym to protect her identity, is caught in the Trump administration’s unprecedented efforts to dismantle the United States’ asylum system. Like some 60,000 other asylum-seekers, Alicia was forced back into Mexico after legally crossing the US border to request asylum. Under the year-old Migration Protection Protocols (MPP) program (better known as “Remain in Mexico”) she now has to wait on the Mexican side of the border until her case gets resolved in the US court system. While the MPP was briefly blocked by a court injunction on Feb. 28, as of press time it was still in place, and Alicia was still in Mexico.

Because of the Trump administration's Migration Protection Protocols, many US immigration attorneys — most of them pro bono — have found themselves remotely representing asylum-seekers stuck hundreds of miles away in Mexican border towns.

Because of the MPP, many US immigration attorneys — most of them pro bono — have found themselves remotely representing asylum-seekers stuck hundreds of miles away in Mexican border towns. The attorneys say being unable to meet their clients in person introduces unprecedented difficulty to their jobs — and could violate clients' rights to due process under US law. They have difficulty staying in contact with clients. Some lawyers have even had to buy phones for their clients. And when clients do make it to court in the US, the newly instituted “video teleconference” courts on the border add new hurdles to an already tense situation. Attorneys told The World they are sometimes unable to hear their clients over the link. At least once, one attorney said, a judge requested a background fan be turned off on the asylum-seeker’s side; the sound improved, but the heat was sweltering. 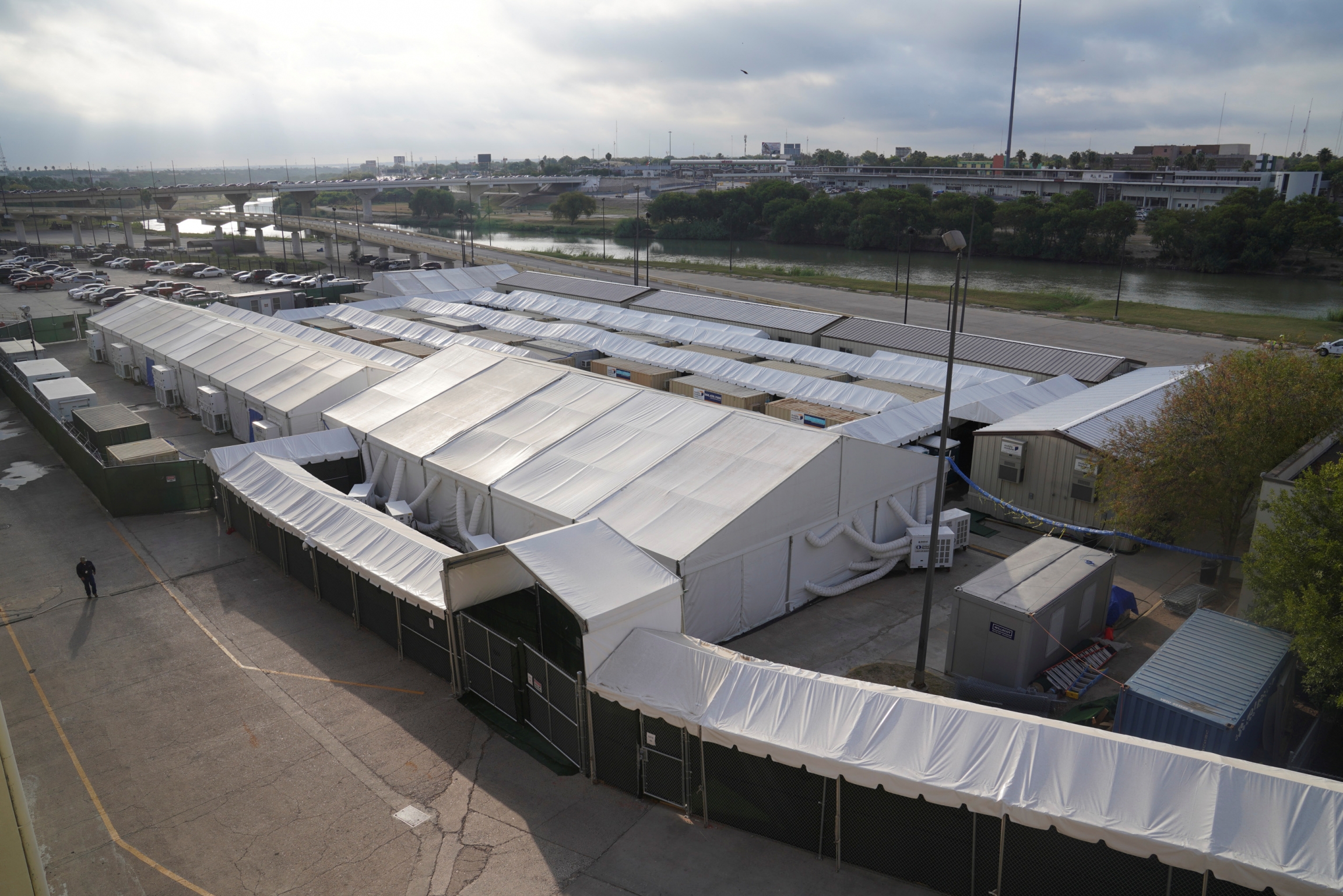 Attorneys also worry about their clients’ physical security. Under MPP, asylum-seekers are being sent back to some of the most dangerous cities in the hemisphere. In the last year, there have been hundreds of documented cases of returned asylum-seekers being kidnapped, raped, robbed, extorted or even murdered in northern Mexico.

Pushing asylum-seekers across the border to Mexico has also meant pushing them away from US lawyers who could have otherwise represented them in US court. Representation rates have plummeted. Even before MPP, it was difficult for asylum-seekers to connect with a lawyer: In recent years, around 30% of asylum-seekers found representation. However, among asylum-seekers forced to wait in Mexico in the last year, less than 5% have found attorneys, according to research out of Syracuse University. Whether or not asylum-seekers find representation is often the difference between winning or losing their asylum cases. Studies show that one’s chances of gaining asylum go up by as much as 500% when they have a lawyer.

Alicia only managed to call Brown because of a family connection: Brown had successfully represented Alicia’s sister in her own asylum case years before. Most other asylum-seekers stuck in Mexico have not been as lucky.

Because almost no US legal aid organizations have the resources or certification to operate in Mexico, most asylum seekers stuck south of the border have few ways to find lawyers.

US Customs and Border Protection has given some asylum-seekers it returns to Mexico a slip of paper listing various US nonprofit legal aid hotlines. But many people don’t have a phone or minutes to make the long-distance call. And among asylum-seekers who do manage to call, many report that the numbers they dial don’t even ring. Because almost no US legal aid organizations have the resources or certification to operate in Mexico, most asylum seekers stuck south of the border have few ways to find lawyers.

Brown said on their first call, Alicia sounded desperate. The Honduran mother did not fully understand what was happening: Why was she back in Mexico? Alicia and her daughter were sleeping on the floor of a church basement, alongside dozens of other asylum-seekers who were also stuck, homeless, in Nuevo Laredo, a notoriously dangerous border town. Alicia couldn’t find a private place to talk when she called Brown. So, in a hoarse whisper, she unloaded her story over the phone, sometimes breaking into deep sobs as she told Brown about surviving rapes and severe beatings in Honduras. These were stories Alicia had never told anyone — not her sisters, not her own mother — and she had to recount them in a room full of strangers. Asylum attorneys say this is a common story: Their clients, even if they have access to a phone, often can’t find a private place to speak.

Related: How Trump's deals with Central American nations undermine the US asylum system

Prior to the MPP, Brown had always met with her clients in person, normally in the privacy of her office. In person, asylum attorneys can read their clients’ body language. They can slow down when they notice a client shaking or crying. Many attorneys also keep coloring books or toys for client's children to play with to help distract them. On her phone calls with Alicia, Brown couldn’t do any of that.

“Listen, I don’t want to minimize how difficult it is to represent someone in detention,” said Rebecca Press, the legal director for UnLocal, a nonprofit legal aid organization for immigrants based in New York City. “But I can visit a client at a detention center in the morning and be back in my office by afternoon … I can also meet with them over a secure, private video conferencing link.”

Whenever her client didn’t reply, she would stare at the messages marked “unread” and imagine the worst: Had her client been kidnapped, or killed?

That all changed when Press began representing a client forced to remain in Tijuana, Mexico, due to MPP. “It was drastically different,” Press said.

Even though she managed to visit Tijuana to meet with her client in person for their first meeting, she said, their meetup only lasted an hour or so. They had to build the rest of the case by phone. Press said the remote work made her anxious. Whenever her client didn’t reply, she would stare at the messages marked “unread” and imagine the worst: Had her client been kidnapped, or killed?

Even when attorneys do manage to meet with clients in person in Mexico, difficulties persist. When Brown went to Ciudad Juárez to meet with prospective clients, she had to meet them in crowded shelters. Sometimes the power would go out, and Brown would sit in the dark on the floor, trying to find a way to help people feel comfortable enough to share their stories of violence and oppression. Attorneys have struggled to do the most basic parts of their jobs in foreign cities — for instance, finding places to securely print confidential documents.

Most pro bono asylum attorneys don’t have the funding or time to travel back and forth from Mexico to meet clients. There’s also the issue of safety. When Brown took Alicia’s case, she agonized over whether or not to visit her in Nuevo Laredo in Mexico. On the news, she saw footage of massive shootouts between the police and cartels. She said she felt guilty for feeling nervous: After all, her clients had to live in places like Nuevo Laredo — shouldn’t she at least visit? But after more research, Brown made the difficult decision to represent Alicia remotely.

While building the case, Alicia has endured significant threats of violence. On her bus ride to the border for her court date, Brown said, Alicia and her daughter narrowly escaped an attempted kidnapping.

The dangers asylum seekers face in Mexico — and the difficulties attorneys face representing them there — form the basis of the major lawsuit against the MPP currently pending in federal court. In the lawsuit, Innovation Law Lab v. McAleenan, the American Civil Liberties Union and the Southern Poverty Law Center represent 11 asylum seekers, as well as six legal aid nonprofits who claim their “missions to provide representation to … asylum seekers” have been jeopardized by the MPP. According to the lawsuit, the asylum-seekers have been placed in “danger ... and conditions that make it difficult if not impossible for them to prepare their cases.” 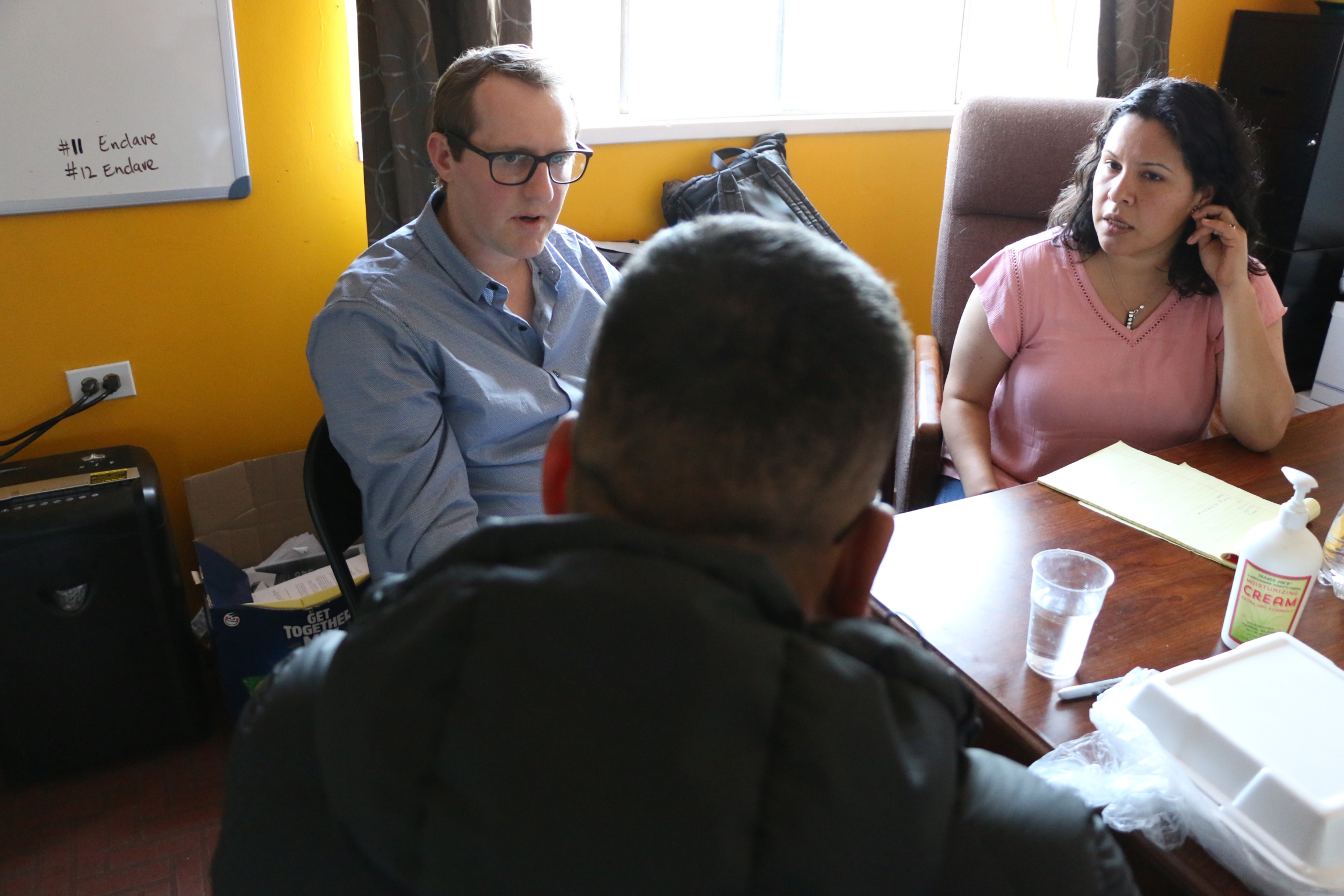 Matthew Weisner, left, meets with his client, known in a federal lawsuit as Gregory Doe, in Tijuana, Mexico.

Less than a week after the MPP went into effect, Matthew Weisner — senior staff attorney for CARECEN, a San Francisco-based immigrant advocacy organization — became one of the first lawyers to try to represent a client remotely in Mexico. In late January 2019, Weisner was in Tijuana meeting with a new client: a Honduran asylum seeker who appears in the ACLU lawsuit under the pseudonym “Gregory Doe.”

Weisner said that in Tijuana, it quickly became clear that the new policy made it intolerably difficult for CARECEN to carry out its mission to represent Gregory. The attorney team had to buy him everything from lunch to a cell phone, and struggled to find places to meet in private. Lacking the funds to manage constant travel to Mexico, CARECEN joined the ACLU lawsuit to oppose the MPP.

“I’m an optimist, and I’m hopeful things will work out for him one way or another,” Weisner says. “You have to be willing to put forward the best effort.”