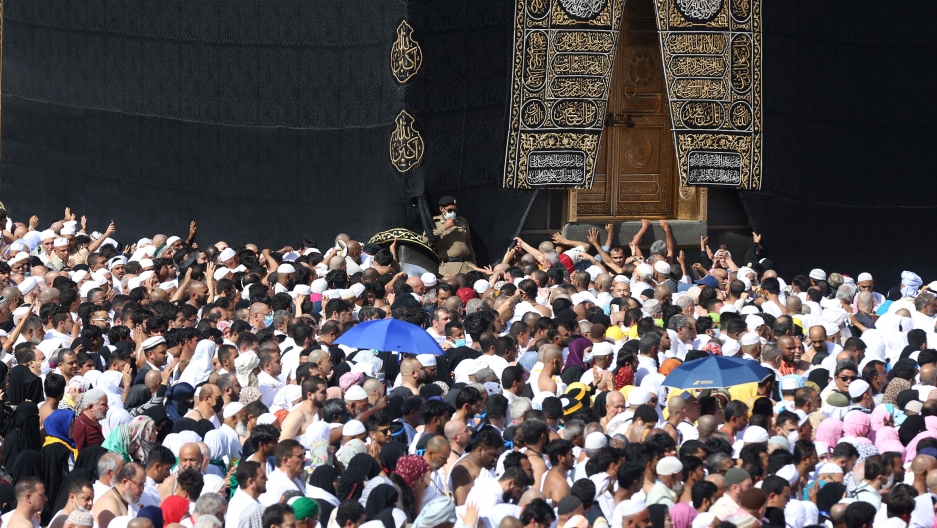 A police officer wears a face mask to prevent contracting coronavirus as Muslim pilgrims pray at Kaaba in the Grand Mosque in the holy city of Mecca, Saudi Arabia, on Feb. 27, 2020.

Muslims across the globe have been planning for months, and saving thousands of dollars for this moment: the hajj pilgrimage to holy sites in Saudi Arabia.

It's an obligation for able Muslims to make this trip at least once in their lifetimes.

But now, with the new, novel coronavirus spreading globally, plans may change this year.

The Saudi government announced a ban on foreign pilgrims to its holiest sites.

Sheikh Yasir Qadhi, a Muslim theologist in Dallas, Texas, was planning to visit Saudi Arabia in the near future. He spoke with The World's host, Marco Werman, about the travel ban.

Marco Werman: Draw us a picture of what the crowds are like when you're there?

Sheikh Yasir Qadhi: I don't think there's anything that can explain to you what those crowds are if you've not been in one. I've done around 20 pilgrimages in my life, and let me explain to you, there are crowds there that you have never seen — the diversity, the sheer quantity of people, the chaos that ensues, because as you're aware, people come from all over the globe. There's language barriers, there's different ethnicities. And, of course, these spaces are very tight. So, you're talking about 2-3 million people going to around five or seven sites where they keep on going place to place, and they're all walking or on motorbikes or on buses or on cars. And the crowd is absolutely overwhelming.

Right. So what is your reaction to the news that Saudi Arabia says it will not allow Muslims from other countries to enter Mecca and Medina?

Well, do realize that this is not a permanent ban. Right now, we don't know what's happening with the hajj. This is a temporary ban on some countries for the umrah. Anytime you go outside of the mandatory season, it's called an umrah. So, we're kind of in limbo. We don't know what's going to happen when it comes to the hajj season in three months. We don't know yet. So, we are confused. We are flustered. We are a little bit worried and scared. All put together.

What is your biggest worry? What are you scared of?

What happens to all that investment that they've made? Is it just kind of up in smoke?

I think we're going to get a large amount of refund because they're not going to be going. So, I think that's not the issue. The issue is the psychological, the impact. Now, in America, we don't have a visa quota. We can go any year. But do realize, for most Muslim countries, to get the hajj visa is not necessarily something that is going to happen anytime they want it. It's a quota system. And so, you have to apply for the hajj visa. It is potentially possible that if they don't go for hajj this year, they might not be able to go for a number of other years despite the fact that they got the visa this year. So, I don't know how that would work out in other countries.

We know, generally, that viruses spread easily in crowds and everything we know about the coronavirus suggests it thrives in a crowd. Had you worried about this before the outbreak?

So, around a decade ago, there was a meningitis outbreak, and there was a lot of concern that meningitis might be causing issues in the hajj. And the hajj ministry required all of us to take special shots when we went for the pilgrimage, and they continued to require that for a number of years. So, this isn't the first time where these types of fears have occurred. However, I think obviously it's understood the coronavirus is at a different threat level, and understandably, there's a lot of consternation amongst all of us, myself included.

We should really make clear that cleanliness and hygiene is, I mean, it's a central tenet of Islam — like five times a day. Right?

Muslims are definitely people who are very concerned about physical hygiene. By the way, there's a very interesting point here. And that is the face mask — when you're in pilgrim, when you're actually wearing the pilgrimage uniform, a lot of people will be hesitant to wear a face mask. And I think Saudis have to take that into account because technically speaking, you're not supposed to cover your face in the pilgrimage. You're supposed to show humility. Your hair and your face for men should be open completely to show your humility to God. And even though, of course, medically speaking, you would be allowed to take any means necessary to protect yourself — so, there's no problem here to wear a face mask. Medically speaking, still, a lot of pilgrims would feel uncomfortable or awkward that they've spent so many thousands of dollars, and now they're being told they have to wear a face mask and they might feel a pious inclination to not do so.

So, while the decision to ban many foreign pilgrims to Mecca might upend your own tour plans, you kind of understand the rationale.

I fully understand it. And I will respect any decision that is made in good faith. And these are difficult times, and these are new threats. And we want to protect the people. And in our religion, God is forgiving and merciful, so, if we're not able to go for hajj, then it's not going to be a burden on anybody. We firmly believe that God does not place a burden on us more than what we can bear.