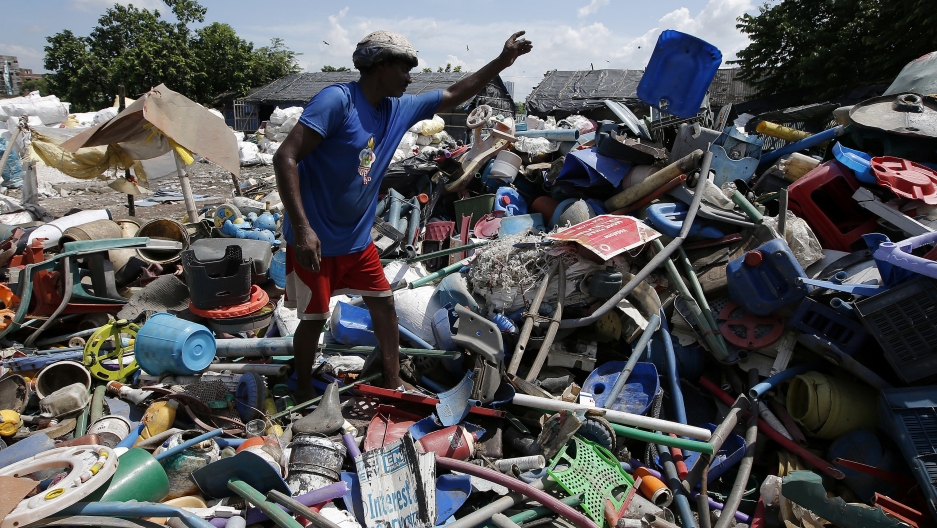 "The more the waste, the better the taste." That's the motto of a café in India. Not just any café. The Garbage Café. Here's the concept: Bring in a kilogram of plastic trash — about two pounds worth — and you get a free hot meal.

The café, which opened in October 2019 in the small city of Ambikapur, India, comes at a time when India still generates 57,320,188 pounds of plastic waste every day, according to government data. The waste is often dumped in streets, drains and landfills.

Zeeshan Khan, an environmentalist and founder of the Garbage Café, talked with The World's host Marco Werman about the origin of the idea and the reasons why it matters now in India.

Marco Werman: Did I explain the formula correctly? A kilogram of plastic trash and you get a free hot meal?

And it's any kind of plastic? It doesn't have to conform to specific recycling requirements or anything?

For now, we are accepting all kinds of plastic, but in future we are segregating it. We are — if [and] when people get verified — we'll be doing the segregation and try to bring them the separate plastics as well.

And what do you do with the plastic waste afterward? Is it recycled?

Related: A nonprofit works to turn plastic trash into cash and other necessities

Your café opened several months ago in October. What's happened since then? How popular has it become?

And they are getting that idea in Italy because of what you're doing in India?

Yeah. They are constantly in touch with me and we are sharing the ideas and all the necessary do's and don'ts. We are sharing [ideas] and we are implementing it all across the world.

So, in addition to this novel idea, the Garbage Café, you're also finding a kind of a faith-based way to encourage recycling. Explain that.

Yeah, so we're coming up with this new idea called a plastic donation center — we are working to get rid of plastic bags. We are urging people to donate their plastic bags, which we are upcycling for city beautification by making two art installations. And also, we are selling it to generate revenues, which is used for the welfare of  society and also [to] generate employment for deprived sections of society. India has a diversity of religious beliefs and practices. Donation is considered a major belief. So, we have connected this donation thing with the plastic waste — we are urging people to donate.

So basically you're appealing to that generosity that's embedded in Hinduism and Islam.

India's Prime Minister Narendra Modi said he wants to phase out single-use plastics by 2022. What role is the Garbage Café playing in achieving that goal?

From the time it started back in 2014, the cleaning mission has become a vibrant, mass movement now. The mission has contributed to India's reaching the Sustainable Development Goals. The government's next big priority, after achieving the aim of building 100 million toilets, is to phase out single-use plastic now. And as you said, our prime minister has announced to give up single-use plastic on the 150th anniversary of Gandhi in 2019. Since then, policy-level work is going on and the government [is] actively spreading awareness among the citizens.

I imagine you're hopeful about seeing an India that's free of single-use plastics by 2022. But what are the obstacles to that happening?

What we are facing [is] the challenge [of] a lack of awareness among people. Because there is awareness in the urban areas, but in rural areas there's a very [significant] lack of awareness. So, what we are doing is — we are educating them. We are building plastic warriors. We have introduced this, another program called Plastic Warriors. We are training these certain amount of people and they are then training the next group of people. So, we are spreading awareness by doing this.

As for you, Zeeshan, what got you into tackling plastic waste in India specifically?

I was at a café with my friends and I saw this guy, this little boy who who was picking up the plastic from the trash can. And I asked that guy, "Little boy, why are you collecting this from the trash can and what would you do out of it?" He just replied — "food," and that's it. I was shook by the [his] words and I didn't sleep the whole night — I researched on it.

So, it was just seeing that kid in the street picking up plastic and saying he's going to use it to get food?

Yeah. It completely changed my mind and I fully, completely dedicated to working on it and came up with these two ideas: the plastic donation center and the Garbage Café.