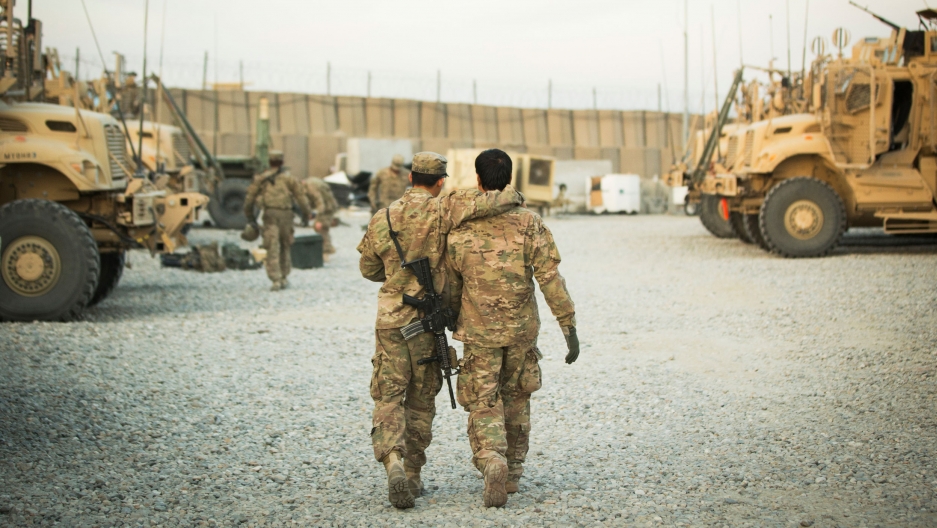 A US soldier from the 3rd Cavalry Regiment walks with the unit's Afghan interpreter near forward operating base Gamberi in the Laghman province of Afghanistan.

For over a decade, Mohammad has worked alongside US troops in his home country of Afghanistan working as an interpreter and, most recently, helping the US train Afghan security forces. For over a decade, he has waited for the US to grant him a Special Immigrant Visa (SIV).

The US offers the visas to Afghans and Iraqis if the work they do on behalf of the US government leads to threats against them from groups like the Taliban. Under the Trump administration, processing times for these visas have grown lengthier, and fewer are being issued. At least 15,000 SIV applications are pending. In the meantime, people like Mohammad live in fear.

Mohammad, who asked to use only his middle name, lives where he works, in the compound where the local security forces train. He only visits his wife and six children in secret, going to his village undetected and hoping to avoid Taliban checkpoints along the way.

Despite risking his life for the US, his visa application continues to be delayed. He told The World he felt abandoned.

“It’s a shame that we are still left behind. Why? Why are there delays?” he said via Skype from Kabul.

Hearing about these delays angers many US officials and military members who worked closely with local interpreters. “These are guys that we trusted,” said David Smyth, an Army Special Forces Major who served in Afghanistan and Iraq. He didn't know Mohammad, but the work that people like him did was crucial, he said. “These guys are really honestly trusted with their lives and they frequently have put themselves in harm's way. I know in my case, on multiple occasions, my life was saved by my interpreter.”

A US federal court decision may provide Mohammad some relief. On Feb. 5, the US District Court for the District of Columbia gave the US government 30 days to propose a plan to expedite processing for all SIV applications that have been pending for more than nine months, the benchmark time period set by Congress to process the visas. That court-ordered deadline is next week.

A spokesperson for the State Department, which oversees the visa program, said in a statement to The World: “We take these threats very seriously, and we are committed to providing efficient and secure SIV processing while maintaining national security as our highest priority." The spokesperson also added that more resources are being dedicated to SIV processing, but declined to provide specifics about that expansion.

The class-action lawsuit was brought by the International Refugee Assistance Project, or IRAP, a New York-based legal services group that has lobbied Congress for years to increase the annual number of SIVs it grants and speed up processing times.

Until a decision is made on Mohammad’s case, he still risks his life daily for the United States. He also worries that as Afghanistan enters peace talks, combined with a drawdown of US troops, the Taliban may become more empowered and target people like him who supported the US military.

“We are imprisoned,” Mohammad said. “You know, we feel more American than the real Americans. We helped them. We served the American lives. Our future has no future here. We do not see it here, and we can't make it here.”