When high school students in Santiago, Chile, took to the streets in October 2019 to protest an increase in subway fares, Chileans saw an opportunity to denounce systems in place since the country’s 1973-1990 dictatorship under Augusto Pinochet.

Still in the streets four months later, protesters have called for economic reform and a new constitution to replace the 1980 constitution written at the height of General Pinochet’s rule. 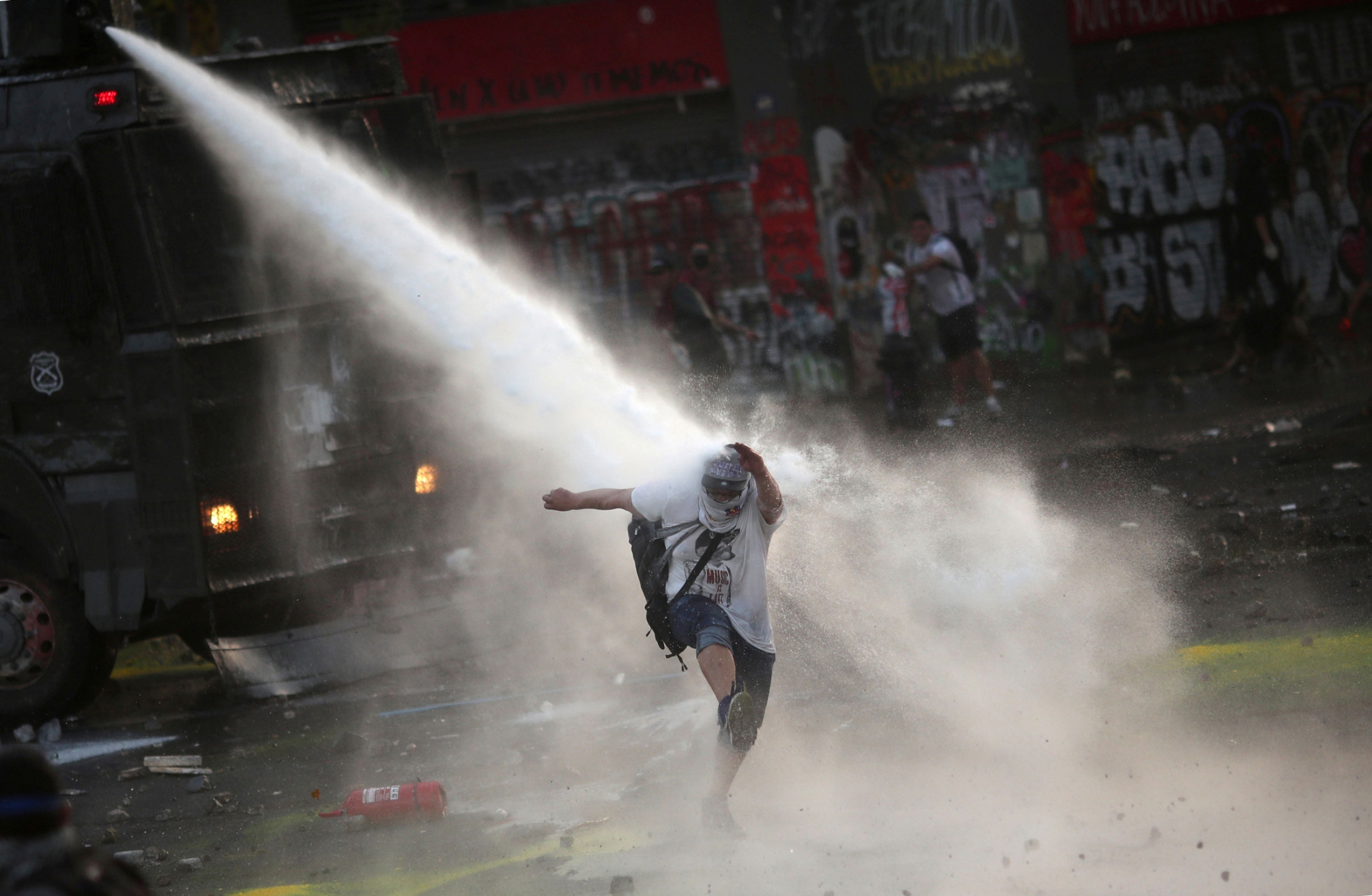 A demonstrator reacts as he is sprayed by a riot police water cannon during a protest against Chile's government in Santiago, Chile, Dec. 18, 2019.

As Chileans have called for change by marching in the millions and petitioning their representatives, many women have turned to a form of artistic protest dating back to the dictatorship era: the arpillera — scenes of tragedy or protest embroidered onto scraps of burlap.

As relatives were disappeared or killed during the dictatorship, Chilean women embroidered scenes of their relatives’ disappearances into detention centers or families protesting for truth and justice, usually under the protection of the Catholic Church, in each others’ homes or workshops.

The women carefully folded their embroidery into their purses to hide their stitches from the prying eyes of state police. When finished, women smuggled their notebook-sized tapestries abroad to show the world what was happening under Pinochet’s government.

For decades, Chilean women have gathered to stitch political works of art. Today, Chilean women are denouncing President Sebastián Piñera and the Chilean state with embroidery specifically responding to the nationwide protests. 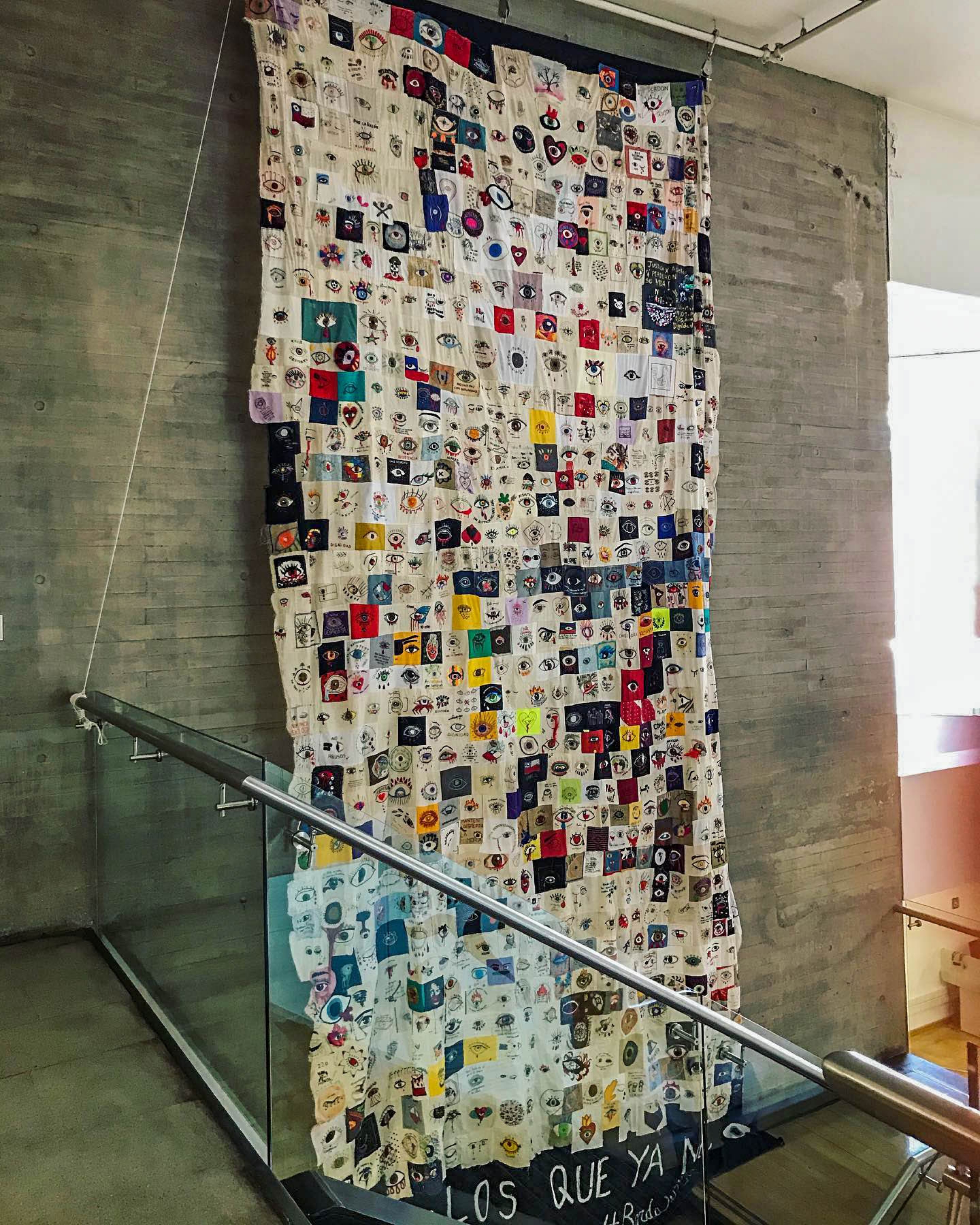 A 23-foot-long tapestry of bleeding eyes entitled “Embroider Your Eyes,” on display in the Museum of Memory until March 2020.

A tapestry of bleeding eyes

During the most recent protests, an unusually high level of eye injuries led the United Nations to launch an investigation into possible human rights abuses by police officers.

To denounce this violence, embroiderer Lilian Urzúa and illustrator María Ignacia Jerez invited artists to stitch bleeding eyes in honor of 359 recorded eye injuries. Although neither Urzúa nor Jerez were injured during the protests, both knew others whose eyes were wounded.

“Being in the line of fire in the demonstrations, I saw my companions lose their eyes next to me, something that I will remember forever. ... A few weeks before the exhibition, a girl next to me lost her eye and I had to help her.”

“Being in the line of fire in the demonstrations, I saw my companions lose their eyes next to me, something that I will remember forever,” Jerez said. “A few weeks before the exhibition, a girl next to me lost her eye and I had to help her.”

They decided to embroider “because the embroidery community in Chile is very strong and present across the whole country,” Urzúa said. “In moments of crisis, it has always been a way to resist.”

The artist duo received 875 blocks, stitched in Chile and across the Americas, which now form a 23-foot-long tapestry of bleeding eyes entitled “Embroider Your Eyes,” on display in the Museum of Memory until March 2020.

“They have kept this art alive and related it back to current problems that we have as a country,” said Museum of Memory conservator Verónica Sánchez Ulloa, who maintains a collection of dictatorship-era arpilleras and has collaborated with Memorarte, a women's embroidery collective.

Many Memorarte members learned directly from arpilleristas who sewed during the dictatorship.

For Jerez, it was important that the project not only denounce police violence, but record it for future generations. Jerez suggested donating their tapestry to the Museum of Memory “so that what happened will never be forgotten.”

“I had a great fear that this will simply be forgotten,” Jerez said. “My work arises from the need for tangible proof of what happened.”

Santiago’s Museum of Memory and Human Rights hosts 487 additional, preserved arpilleras from the dictatorship. Unlike historic arpilleras, however, which depicted entire scenes, “Embroider Your Eyes” is relatively simple.

The blocks “are eyes designed according to the sensibility and expertise of each woman,” said Museum of Memory conservator Verónica Sánchez Ulloa, who maintains a collection of dictatorship-era arpilleras and collaborated with Urzúa and Jerez to bring the project to the museum. As a result, each block is a little different; some elaborately detailed, others minimalistically rendered.

But the tapestry holds the same power as any arpillera.

You “feel affected by the feelings or suffering of another, you see the embroidery or the arpillera, you become emotional,” said Sánchez Ulloa. “You know that there is a pain behind it.”

For Agosín, Memorarte and “Embroider Your Eyes” have tackled some of the same issues as the dictatorship-era arpilleristas, “such as the plight for social justice.” But, these modern-day arpilleristas “belong to a much younger generation” and have protested more visibly than their predecessors.

What Agosín believes is most powerful about the arpilleras — and which has remained true both then and now — is their ability to center women’s voices in nonviolent protest. 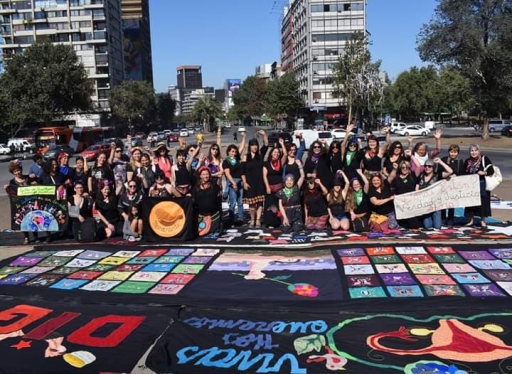 Women gathered in Santiago's Plaza Italia to hang embroidered tapestries with slogans calling for legal abortion and an end to sexual assault.

On Dec. 7, 2019, a few dozen women gathered in Santiago to hang embroidered tapestries in the Plaza Italia. Stitched slogans calling for legal abortion and an end to sexual assault decorated burlap sacks and yards of cloth. Their art covered the city square that has hosted generations of demonstrations and members of Memorarte held aloft a banner to honor victims of femicide.

“We are going to display all of our arpilleras expressing our support for the movement,” said Memorarte director Erika Silva Urbano, in December.

After they filled Plaza Italia with tapestries, Memorarte members marched together to the nearby Violeta Parra Museum that honors Violeta Parra, a musician and folklorist who embroidered on burlap in the 1950s and 60s.

That weekend, Memorarte’s embroiderers hung appliqued palomas huecas (“hollow doves”) outside the Viola Parra Museum. Memorarte began embroidering the doves in 2016 to represent people still missing from the years of the country’s dictatorship. But at that demonstration, and at protests and fairs nearly every weekend since then, Memorarte also displayed arpilleras urging political change.

Chilean American author Marjorie Agosín acknowledges the universality of embroidery as a form of women’s expression across cultures, citing the ancient Greek myth of Philomena, who was raped by her brother-in-law, but then “told her story through a tapestry.” But Agosín also believes that the Chilean women who embroidered during the dictatorship were “pioneers” who “decided to tell the story of their missing children through embroidery,” while defying military censorship.

For years, Memorarte has embroidered arpilleras calling for a new constitution, an expansion of Indigeneous rights and an end to violence against women.

“We do not need to embroider now because we have already embroidered many of the things that Chile is demanding,” said Silva Urbano. Now, “the idea is to make visible and offer possibilities for people to interact and create, co-create, these collective arpilleras.”

Although protesters have succeeded in their demand for a referendum on a new constitution, they have also faced extreme violence from police officers patrolling the demonstrations. Amidst these high rates of violence, the Chilean National Institute of Human Rights has recorded 158 incidents of sexual violence. 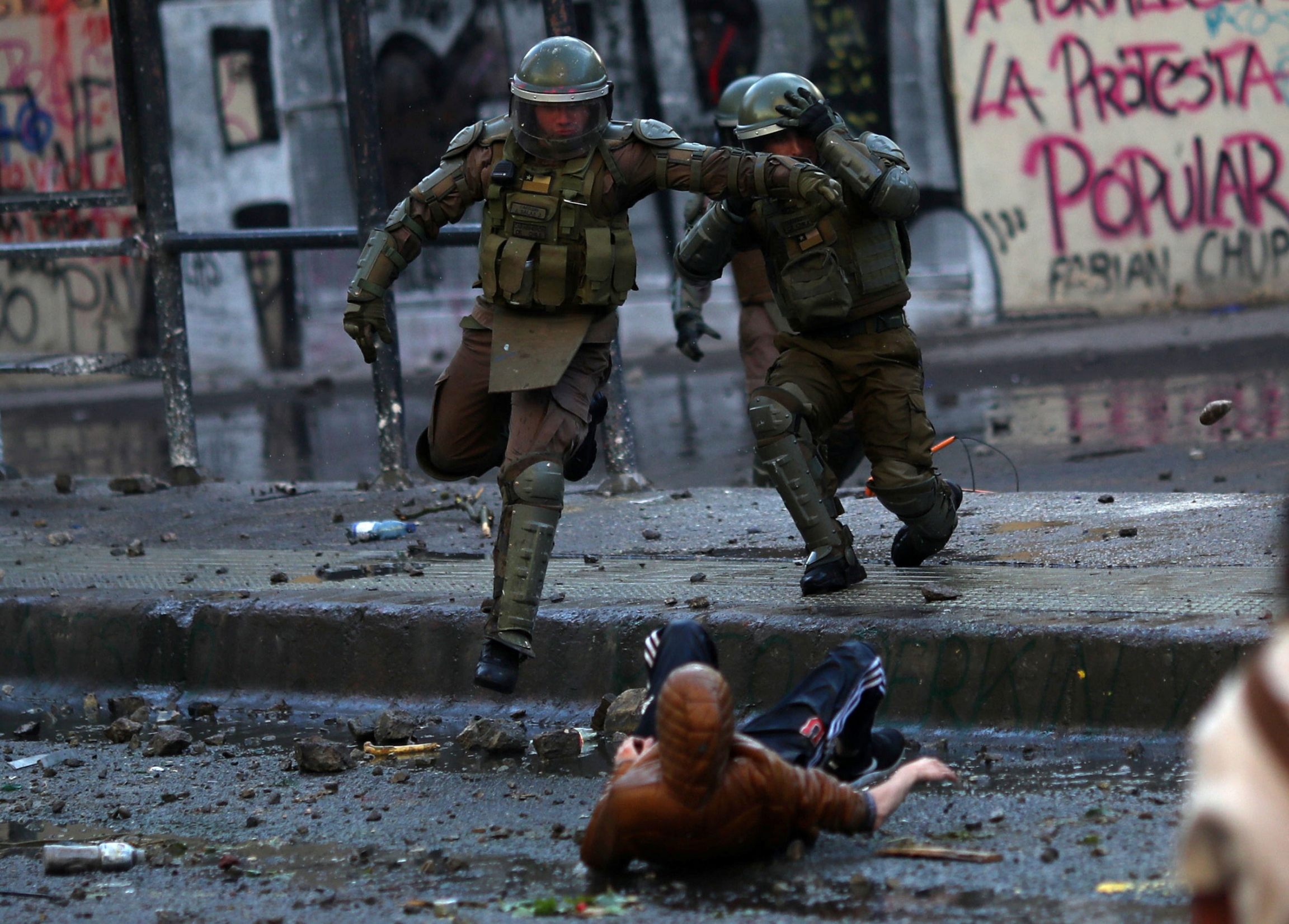 Amnesty International reported in November that at least 16 cases of rape or sexual abuse were perpetrated by state security forces.

That’s why Memorarte has made a point of embroidering explicitly feminist banners. From tapestries memorializing victims of femicide to banners calling for an end to violence against women, Memorarte has brought feminist embroidery to protests in the Plaza Italia, fairs in central Santiago, and marches along the city’s main avenue.