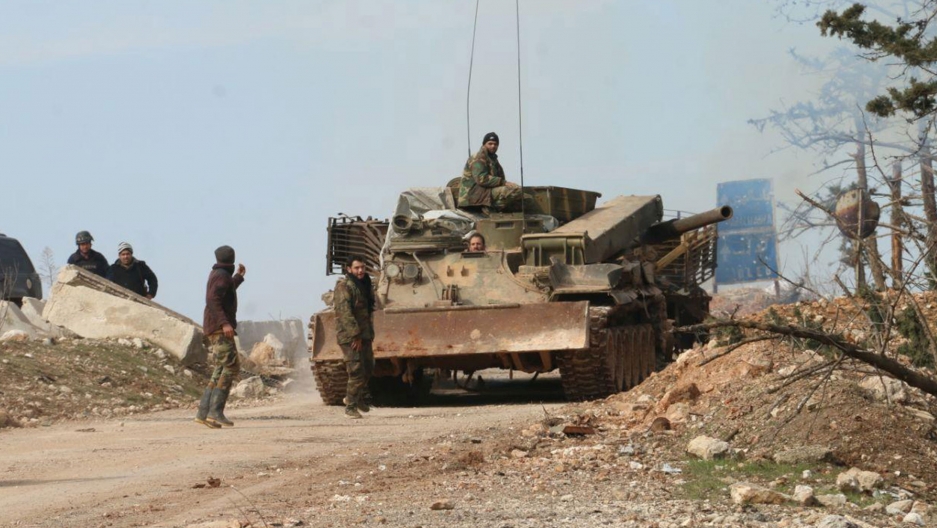 Syrian army soldiers are deployed in the town of Khan al-Assal, west of Aleppo, Syria, in this handout released by Sana on Feb. 16, 2020.

The Syrian army said it had taken full control of dozens of towns in Aleppo's northwestern countryside and it would press on with its campaign to wipe out militant groups "wherever they are found."

On Tuesday, the United Nations said government air strikes have hit hospitals and displaced persons camps in northwest Syria and killed about 300 civilians as President Bashar al-Assad's forces press an assault against the last rebel stronghold.

UN officials said relief agencies were overwhelmed by the humanitarian crisis as nearly one million civilians, most of them women and children, had fled toward the Turkish border in bitter winter conditions to escape the onslaught.

"Civilians fleeing the fighting are being squeezed into areas without safe shelter that are shrinking in size by the hour. And still they are bombed. They simply have nowhere to go," UN human rights chief, Michelle Bachelet, said in a statement.

Syrian and Russian warplanes meanwhile kept up raids on the town of Darat Izza in Aleppo province on Tuesday, witnesses said, one day after two hospitals there were badly damaged.

At Al Kinana Hospital, blown-out walls and dust-covered medical cables and supplies were strewn about the hospital after two staff were wounded on Monday, witnesses said.

Appearing on national television on Monday, Assad said the rapid military gains presaged the eventual defeat of the nine-year-old insurgency against him although it could still take time. The rebel factions include Turkish-backed rebels and jihadist militants.

The offensive has also disrupted a fragile cooperation between Ankara and Moscow, who back opposing factions in the war. They began a new round of talks in Moscow on Monday after demands by Ankara that the Syrian army should back down and a ceasefire be put in place.

UN human rights spokesman Rupert Colville, asked if Syria and its ally Russia were deliberately targeting civilians and protected buildings, said: "The sheer quantity of attacks on hospitals, medical facilities, and schools would suggest they cannot all be accidental."

The attacks could constitute war crimes, Colville told a briefing in Geneva.

The UN human rights office said it had recorded 299 civilian deaths since Jan. 1, about 93% caused by the Syrian government and its allies.

The swift advance of government troops, backed by Russian air strikes, through northwest Syria has also caused the biggest displacement of the war as people flee toward a shrinking pocket near the Turkish frontier where insurgents hold their last strongholds.

A UN spokesman, David Swanson, said close to 900,000 people have fled conflict zones in Idlib province and western Aleppo since December, more than 80% women and children.

Many have been unable to find shelter and are forced to sleep outside in freezing temperatures and burn plastic to stay warm, risking disease and death.

"Only half of all the health facilities in northwest are still functioning now," Swanson said.

Hurras Network, a Save the Children partner in Idlib, said seven children including a seven-month-old baby had died from freezing temperatures and bleak conditions in displaced persons camps.

The Syrian army said on Monday it had taken full control of dozens of towns in the Aleppo countryside.

The M5 highway linking Damascus to Aleppo, the focus of recent fighting, was re-opened to civilian traffic on Tuesday after government forces recaptured it last week, the Syrian Observatory war monitor reported.

The opposition also said air strikes in southern areas of Idlib province had left dozens of towns and villages in ruins in what it called a "scorched earth policy."

Alarmed by the new refugee crisis on its border, Turkey has sent thousands of troops and hundreds of convoys of military equipment to reinforce its observation posts in Idlib, established under a 2018 de-escalation agreement with Russia.

Trucks carrying aid supplies still cross from Turkey into northern Syria in a UN relief operation, the UN Office for the Coordination of Humanitarian Affairs said on Tuesday.

About 525,000 displaced children are among those trapped, the UN Children's Fund said.

By Eric Knecht and Stephanie Nebehay/Reuters