As a cold snap hits Jerusalem, a group of energetic Palestinians is running through the city to raise awareness about restrictions on their freedom of movement.

Before setting off from a now defunct railway station, 27-year-old Mahmoud Lafi is busy leading the warm-up with star jumps and high knees.

Some of the 15 runners of all ages have prepared for the winter night run with hats and gloves, while others brave shorts and a handful wear sweatshirts that read: “Right to Movement Palestine.” 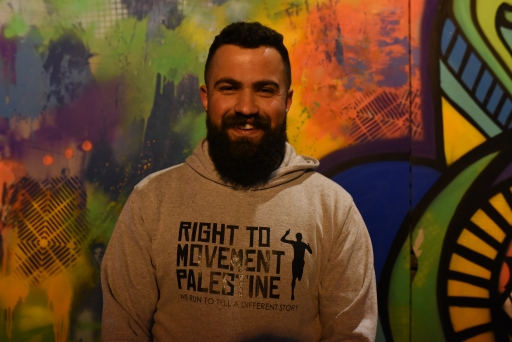 Mahmoud Lafi, a 27-year-old Palestinian who helps organize the Right to Movement runs.

“Our goal is to raise awareness about our right to movement, and to encourage people to run, especially women, to run on the streets,” said Lafi, a veterinarian who helps organize the group runs.

Palestinians have for decades had their freedom of movement curtailed around Jerusalem, with measures the Israeli authorities say are necessary for security.

This includes the construction of a separation barrier established in the early 2000s that cuts through Jerusalem, prohibiting access to certain neighborhoods. And travelers to and from cities such as Bethlehem or Ramallah, in the West Bank in Palestine, must past through checkpoints.

“The whole of Jerusalem is separated from any place we want to go” in the Palestinian Territories, Lafi told The World.

“I live in Beit Safafa [neighborhood], it’s two minutes from the wall. So any trip to Bethlehem, instead of taking five minutes, sometimes it would take an hour or more..."

“I live in Beit Safafa [neighborhood], it’s two minutes from the wall. So any trip to Bethlehem, instead of taking five minutes, sometimes it would take an hour or more,” after traveling along the barrier and passing through a checkpoint.

The idea for the Right to Movement group was sparked back in 2012 in Bethlehem, the West Bank city that lies just south of Jerusalem. Palestinians wanted to organize a marathon but found it impossible to map the full 26-mile route without hitting obstacles.

The Bethlehem group organized four annual marathons before the Palestinian Authority took over the event, while the Right to Movement organization has now spread to cities across Israel and the Palestinian Territories.

The Jerusalem group hosts one fitness training and two runs each week, with routes in both eastern and western parts of the city.

The latest one is a 9.3-mile stretch largely along the old railway track, although those who show up are free to run different distances. 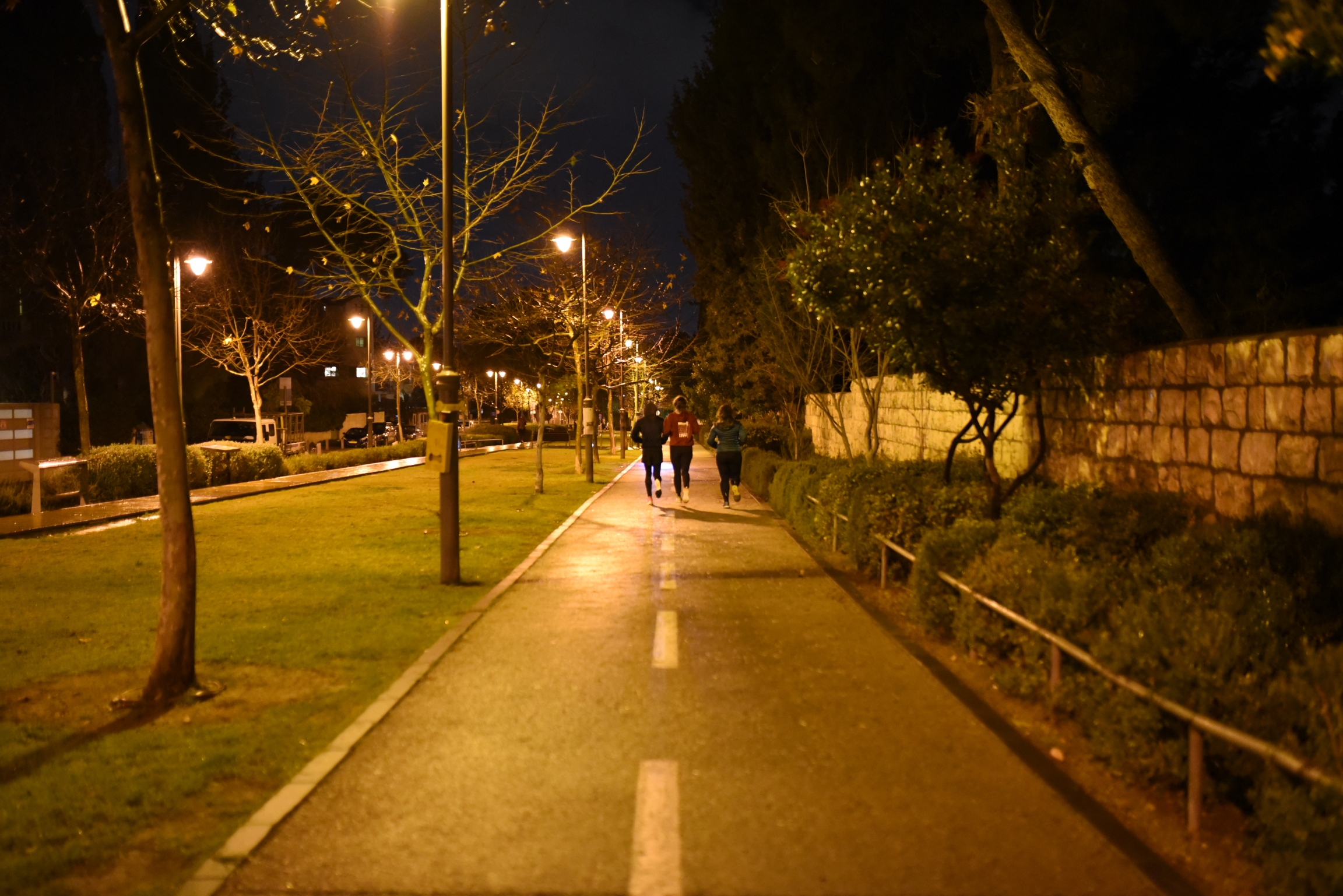 Right to Movement members run along the decommissioned railway line.

George Zerdan, one of Right to Movement’s co-founders, says the community became a chance for people to “do something different.”

“We learned that it became a place for people to, rather than coming only to run, to engage in a social atmosphere,” says the 30-year-old, briskly walking as the temperature hit 37 degrees Fahrenheit.

“It’s very, very cold … People showed up for running training, [which] tells you how people care about it and want to be there,” said Zerdan, who works for an international development organization.

About 25 people usually attend the runs and training sessions, mostly a mixture of Palestinians and foreigners living in Jerusalem. 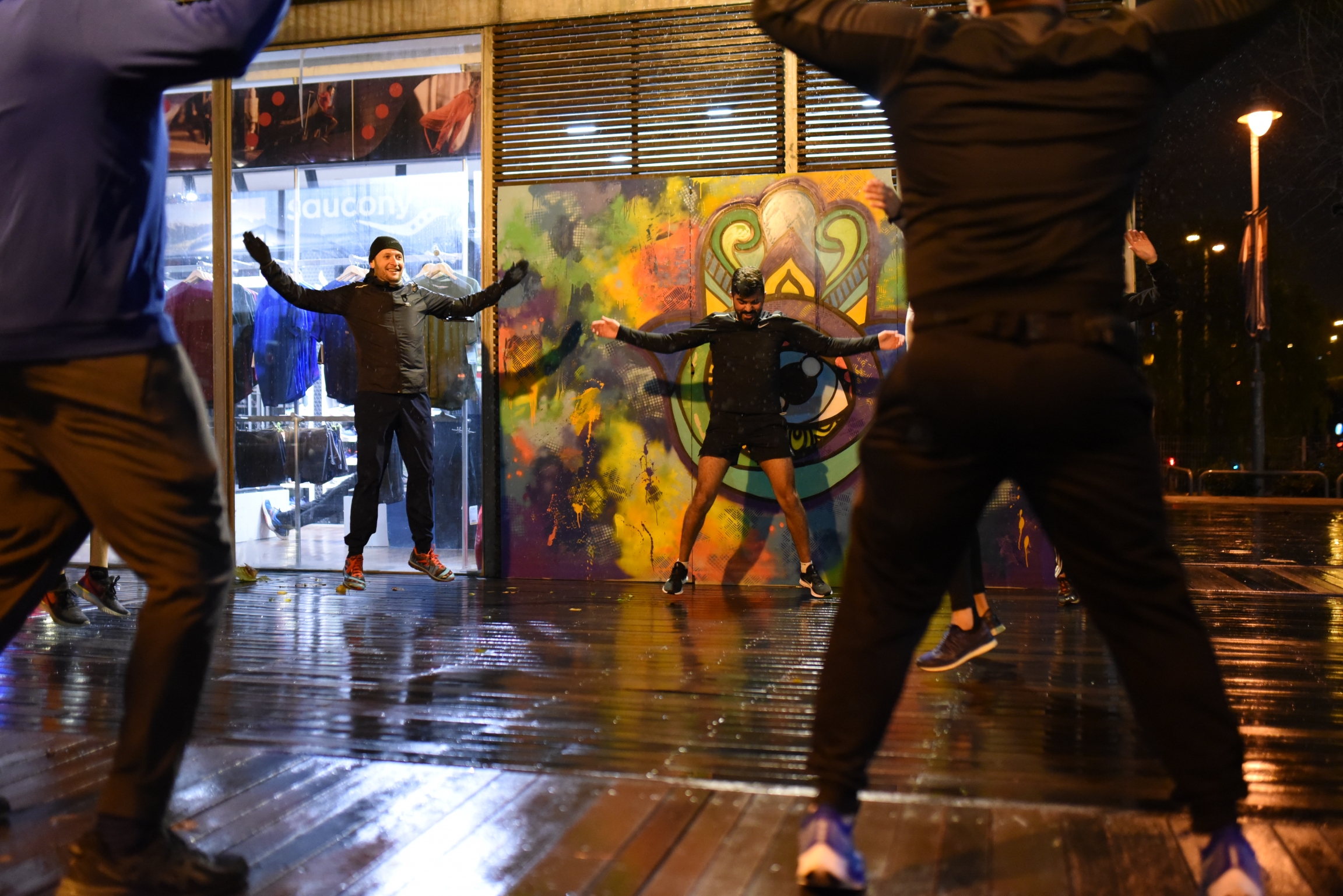 Right to Movement members warm up, led by Mahmoud Lafi.

One of the regulars is Lana Idkaidek, a 24-year-old Palestinian who signed up last summer.

“I wanted to run because I needed to do some exercise and bring sport into my life, to reduce stress and have a better, healthy lifestyle,” she said.

Until recently Idkaidek worked in public relations for a nongovernmental organization, traveling from her Jerusalem home to the West Bank city of Ramallah, where the NGO is based.

“I crossed the barrier every single day, it consumes your life and your energy. I felt it every day, that’s one of the reasons I had to quit [my job] because it has very negative effects on our life."

“I crossed the barrier every single day, it consumes your life and your energy. I felt it every day, that’s one of the reasons I had to quit [my job] because it has very negative effects on our life,” she said.

Related: West Bank settlements could 'kill off hope of a two-state solution

Traveling in the opposite direction, Palestinians living in the Israeli-occupied West Bank must obtain an Israeli permit to enter Jerusalem.

The United Nations humanitarian office (OCHA) says the combined restrictions “impede access to services and resources, disrupt family and social life, undermine livelihoods and compound the fragmentation of the occupied Palestinian territory,” according to their website. 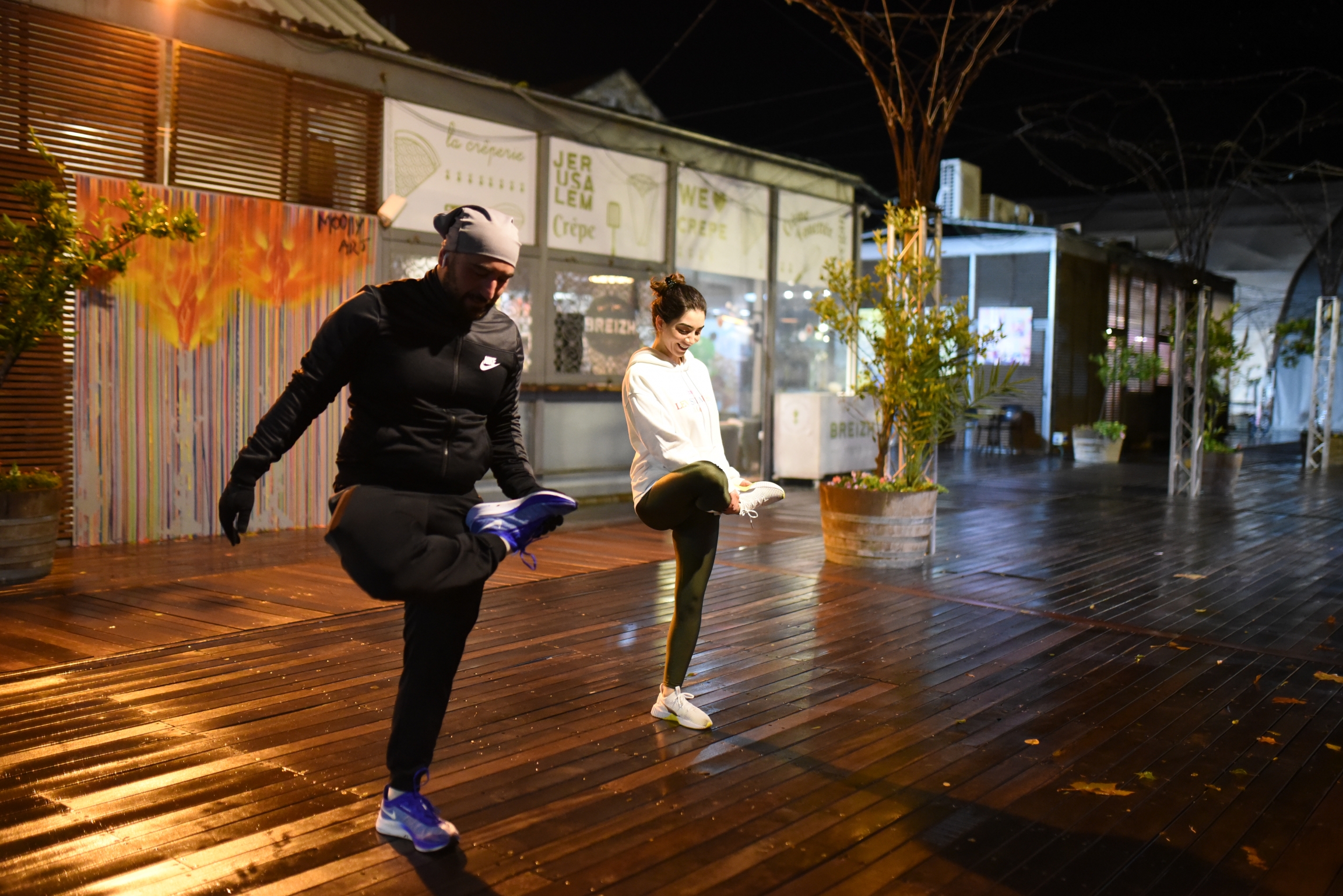 Right to Movement members stretch after their run.

The Coordinator of Government Activities in the Territories (COGAT), the Israeli defense ministry unit responsible for Palestinian civilian affairs, said it issued more than 50,000 permits in December 2019 for West Bank residents to enter Israel.

Jerusalem itself is patrolled by both uniformed and undercover Israeli police officers, while metal detectors are placed at the entrance to malls and public buildings, such as the central bus station.

Heavily-armed police watch over the gates and narrow streets of the Old City, home to Jerusalem’s most important religious sites.

Micky Rosenfeld, Israeli police spokesman, said the security operation does not treat Israelis any differently than Palestinians or foreign visitors.

“People are not randomly checked. ... If you’re walking through the street as a tourist, or you arrive in East Jerusalem or the center of town, police won’t turn to you unless there’s a specific reason.”

“People are not randomly checked,” he said. “If you’re walking through the street as a tourist, or you arrive in East Jerusalem or the center of town, police won’t turn to you unless there’s a specific reason.”

Right to Movement does not run through the Old City, but often holds fitness training at a schoolyard in East Jerusalem — the part of the city occupied by Israel since the 1967 Six-Day War.

The later annexation of East Jerusalem was not supported by the international community, but United States President Donald Trump has broken with decades of consensus and recognized the entire city as Israel’s capital.

Trump went further still in late January 2020, unveiling a peace plan which would make Israeli settlements in the West Bank permanent and create a Palestinian capital separated from Jerusalem by the barrier.

Palestinian leadership roundly rejected the deal. The Jerusalem-based NGO Ir Amim, an organization that monitors the ongoing Palestinian-Israeli conflict in the city, says the deal gives US approval to longstanding Israeli policies.

“Settlements on purpose … were built in between Palestinian towns, to fragment the Palestinian space, then adding the separation barrier created all of these enclaves which affect freedom of movement."

“Settlements on purpose … were built in between Palestinian towns, to fragment the Palestinian space, then adding the separation barrier created all of these enclaves which affect freedom of movement,” said Aviv Tatarski, a researcher with Ir Amim.

Well before the Trump plan was published, Right to Movement has been taking the message to international races including the San Francisco marathon. Last year the group joined the United Nations agency for Palestinian refugees (UNWRA) in a relay race from New York City to Washington, DC, aimed at changing US policy.

While the September relay failed to shift the Trump administration’s stance, in Jerusalem, the runners are confident they are having a positive impact both politically and personally.

For Idkaidek, she said she gained confidence and felt stronger each time she reached a running goal.

“I achieved this, I can achieve more,” she thought, adding that she wants more women to experience the same feelings.

“So I always tell them, come, I will run with you.”