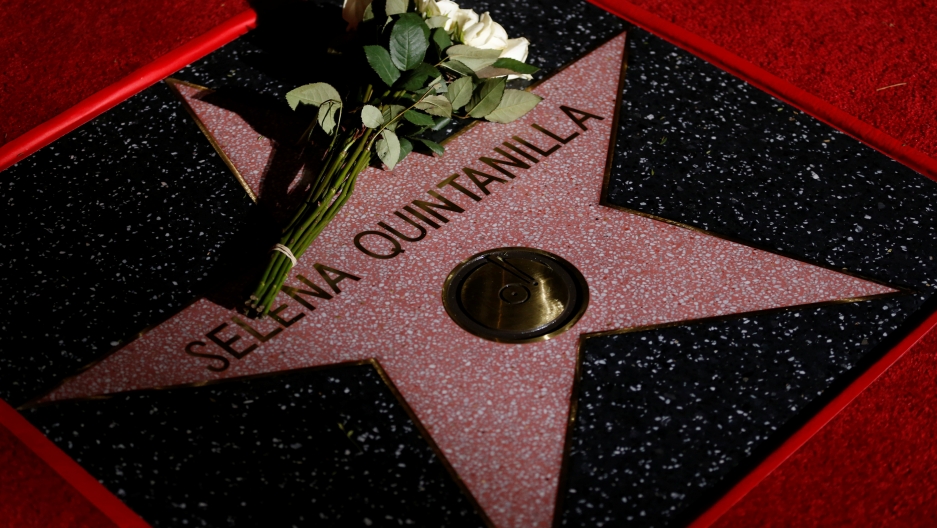 Flowers are seen on the star of late singer Selena Quintanilla-Perez after it was unveiled on the Hollywood Walk of Fame in Los Angeles, on Nov. 3, 2017.

It’s been nearly 25 years since the death of Selena Quintanilla-Pérez, but the memory of the Grammy-winning, Mexican American singer is pervasive in popular culture. Musicians of all genres — from Bruno Mars to Kacey Musgraves — cover her songs. Companies have released Selena makeup and clothing collections. This year, Netflix is releasing a much-anticipated series about her life.

Quintanilla was known as the Queen of Tejano music. Tejano refers to the blend of sounds and cultures along the Mexico and Texas border. It's a generally male-dominated musical genre and mixes traditional music from Mexico with sounds from the US Southwest.

Rodriguez said discussions about Latinx media representation are especially relevant today. Hollywood faces persistent criticism over its inability to be more inclusive. A 2019 report found Latino actors represented only 3% of lead or co-lead roles in movies.

Meanwhile, controversy erupted over the novel “American Dirt,” which critics blasted for its stereotypical or erroneous depictions of Mexican migrants and life in Mexico. The debate highlighted the lack of diversity in the book publishing industry.

Rodriguez spoke to The World’s host Marco Werman about how Quintanilla’s music and legacy are helping Latinx students come to terms with their own identity and to think critically about the lack of Latinx representation in the media.

Marco Werman: What effect did Selena have on you and your own understanding of Latinx culture? Were you a fan?

Nathian Rodriguez: I spent a lot of my early childhood in San Antonio, Texas, and I grew up listening to the Tejano radio stations. I was always listening to the radio trying to win stuff. But I grew up in a very patriarchal Mexican household, and I consider myself a son of an immigrant. My grandfather was like my father to me. He was from Mexico and he spoke Spanish. My grandmother spoke Spanish. My mother and her brother spoke Spanish. And growing up, they really wanted me to speak English first so that I would be successful in school. And so because of that, I grew up in a household hearing Spanish all around me. But I spoke English, so I didn't speak Spanish correctly. I was kind of pocho. So, I never really felt like I belonged. I was always in the middle. I wasn’t Mexican enough, American enough.

So, when Selena came along and I was able to hear her sing in Spanish, but speak in English and talk about her own identity and mispronounce words and fumble on some of the Spanish, it really helped me identify with a Latino person that I had never been able to comprehend. This person that was in the middle, that was living a bicultural life. I saw a lot of myself in Selena. She helped me negotiate my Tejano identity, knowing that there wasn't one correct way to be a Latinx individual. That's really how she resonated with me. And growing up, I just kind of always, you know, looked at Selena as a person that was just authentic.

Selena died in 1995. That was 25 years ago. In the years since, have you seen Latinx media representation change?

I think that we're going in a more positive direction. We're also going in a direction where Latinx identities are not monolithic. A lot of times everybody automatically thinks Mexico, but Latinx is so much more than just a country or a nation or a geographic space. So, I see the direction of the current landscape since Selena's passing really starting to encompass this kind of blending of sorts, of different types of sound and people to make what the Latinx representation a lot more intersectional. Now, that doesn't mean that it's portrayed more often. I think it's just the few portrayals that we do have are more intersectional, and we still have a far way to go.

Is there a song by Selena that you feel captures not just who she was, but also what she represented then?

The first one was “Como La Flor,” which was her first No. 1 hit in Mexico, but also in the United States. And I think that really speaks to her ability to cross borders, to cross genres, and also to cross generations that students now, who weren't alive when Selena was alive, are able to remember that song. And it means something to them. The song lyrics also talk about being given something and then it withers away and you're sad about it. I think that also speaks to this Latin mourning of all the different things that are happening in terms of the militarization of the border, in terms of [Deferred Action for Childhood Arrival] students being scared, in terms of children being put into cages. It really speaks to this whole Latinx culture of wanting and belonging and not being able to have it. I think in a more literal way, it also speaks to the fact that we're still mourning Selena, and we're still looking for, you know, those positive Latinx role models that transcend barriers and genres and generations. We're still searching for that. So, I think of all the songs that students bring, “Como La Flor” speaks to that.

Students also bring up “Amor Prohibido.” The lyrics talk about how society doesn't want certain people to be together, parents don’t want them to be together. I think people can internalize that and transfer that to maybe being of two different religions, different political ideologies, to people who are also part of the LGBTQ community.

And then the third one is “Tu Solo Tu,” which is a very traditional mariachi song. It's a cover, it’s not a Selena original. She was able to give a new Tejano, modern mainstream pop culture sound to a traditional mariachi song. And I think that's what made her so popular with Mexicans in Mexico. Because they heard a song that was familiar to them, but it had a very new take on it.

What do you hope students take away from your course? Like what do you want them to do with this knowledge?

The first and foremost goal is that I want people to be able to identify with Latinx culture in the mediated landscape, to be more critical in terms of media consumption and be more media literate. For media and journalism students, specifically those who are going out into the world to create media, create advertisements and work in film, television and music, I hope that they become not just critical consumers, but also critical producers, knowing that there are multiple ways in which you can depict Latinx individuals in positive, nuanced ways, not stereotypical, monolithic ways.

I want to give students a sense that they can go out there and do this, that just because they don't see themselves represented in the media, that they can take control and make those representations, whether its starting at a low level with podcasts and YouTube videos to becoming a Gregory Nava and making films.