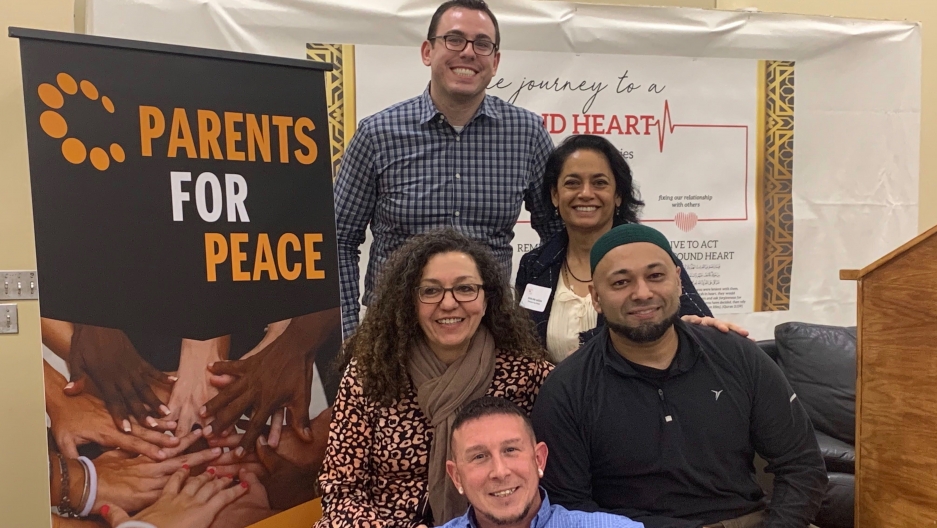 The Parents For Peace team at the Islamic Center of New England in Sharon, Massachusetts.

Courtesy of Parents for Peace

Not so long ago, it would have been impossible to imagine Mubin Shaikh and Chris Buckley in a room together.

Shaikh was a Muslim extremist. Buckley, a member of the Ku Klux Klan.

They were there as part of their work for an organization called Parents for Peace. It’s a group mostly made up of former extremists and their relatives. Their goal is to better understand why individuals join extremist groups and what are the ways to prevent radicalization.

On this particular Sunday, Shaikh and Buckely talked about their personal stories — about what made them join, and what made them quit extremist groups. Shaikh, the former Muslim supremacist — that’s how the group prefers to call Muslim extremists — was sporting a skull cap and a short beard. He started off the conversation by telling the crowd about his childhood in Canada.

Born into a family from India, Shaikh went to an Islamic school as well as a regular, public school. Two very different experiences, he said. In one, he was taught about strict Islamic rules. In the other, girls and boys mixed, and they went to house parties.

It all left him confused and conflicted about his identity.

Maybe some traveling would help him find answers, he thought. So, he left. First to India, and then to Pakistan where he met members of the Taliban.

“So now, there’s this 18-year-old kid seeking a new identity through religion. [He] sees these guys and they seem macho, they’re like tough guys … and I was like ‘yeah, I want to be these guys.’”

“So now, there’s this 18-year-old kid seeking a new identity through religion,” he said. “[He] sees these guys and they seem macho, they’re like tough guys … and I was like ‘yeah, I want to be these guys.’”

The Taliban left an impression on Shaikh. When he returned to Canada, he embraced Wahhabism, an ultraconservative form of Islam. Shaikh said the strict, dogmatic mentality really got into his head.

“Whenever I would take the bus, I would see the synagogue and I thought to myself, ‘How can I blow this place up?’”

He didn’t blow up any place. And in fact, when 9/11 happened, he wondered if he truly understood his religion.

“That’s what really pushed me to say, ‘Hmm, I understand fighting for Islam’ [...] but flying planes into buildings didn’t make sense to me. So, I decided, ‘You know what? I need to study Islam.’”

Related: A ‘man of no land’ tries to find home in Saudi Arabia

After two years of reeducating himself, including meeting with scholars who challenged his notions of Islam, Shaikh was a transformed man. He renounced Wahhabism, became a counterterrorism expert and today, he works with Parents for Peace.

A shoulder to cry on

Parents for Peace started in 2015. It was created by relatives of Carlos Bledsoe. Bledsoe converted to Islam, and, in 2009, he opened fire on a military recruiting office in Arkansas, killing one soldier and wounding another. He is serving a life sentence.

The attack left the Bledsoe family in shock.

“[It was] the worst day of my life,” his father, Melvin Bledsoe later recounted in a video for Parents for Peace.

So, they co-founded Parents for Peace to help parents cope with their grief, find support among each other, and, over time, provide resources to parents whose children showed signs of radicalization.

Myrieme Churchill, the group’s executive director, said personal, firsthand experiences like those of Shaikh’s and Buckley's inform the work they do.

“Our members are former extremists from all kinds of different ideologies,” she said. “[They are] former neo-Nazi, former Muslim supremacists, former antifa and survivors of violent extremism.”

She said the experience of the Bledsoe family is a familiar one.

Related: Why negotiations between the US and Taliban mostly take place in Qatar

“[Recruitment into extremist groups] is an issue that’s so misunderstood, that often families find themselves struggling with shame and not being able to find resources and help,” she said.

Churchill added that in the four years she has been with the group, she has noticed a pattern.

“As we were helping families, we started to see a very similar narrative: People with different religion, different color, and yet the same story — a young person who is vulnerable, with underlying issues, who are being exploited by recruiters.”

The group set up a hotline that families can call if they need help. No judgment.

‘I just wanted to blow things up’

Back at the event, it was Buckley’s turn to take the mic. He is a bit taller than Shaikh and has tattoos all over his knuckles and forearms. Buckley grew up in Cleveland. He described a difficult childhood. He said his parents used racist slurs at home. At school, he was bullied.

“I was that angry kid that was just like … I just want to fight everybody, you know? My dad got really nervous because he was like ‘you’re going to end up in prison or dead,’” he said.

At 17, Buckley got into the military. He said he was so angry, he “just wanted to blow things up.”

Related: 'We have suffered enough,' say families of the missing and detained in Syria

He was deployed to Afghanistan and Iraq. But the war only added to his outrage, he said. Especially after he saw his friend and fellow service member get killed right in front of him in Afghanistan.

When Buckley came home, he felt lost. He started drinking and became addicted to painkillers and meth. He turned to the internet to find a community he could belong to. He found the Ku Klux Klan. There is a video clip of Buckley online that shows him and his young son dressed in a KKK outfit. It’s from a documentary series about the KKK that didn’t air due to public outcry.

A voice in the clip asks Buckley, “Are you a white supremacist?”

“Yeah, absolutely,” he responds. “By the term, ‘white supremacist,’ do you mean do I think that the whites are supreme? I believe so, yeah.”

In 2016, Buckley’s wife was done with her husband’s behavior. An online search led her to Arno Michaelis, a former skinhead who’d turned his life around and was working with Parents for Peace.

“And that began a painstaking, brutal transformation in me,” Buckley said. “The first thing Arno told me was like, ‘Bro, you’ve got to get sober man.’”

Michaelis introduced Buckley to Shaikh, the former Muslim supremacist, and Heval Mohamed Kelli, a Syrian cardiologist who had moved to the US shortly after 9/11. For the first time, Buckley was having real conversations with Muslims, he said, and it made him realize how much he had misunderstood Islam.

“Every religion tells us to love each other,” he told the crowd at the Islamic Center of New England in Sharon, Massachusetts. “So, let’s love each other.”

Buckley is now working on a new program, slated to launch in the spring, called “Hate Anonymous” that helps extremists break away from hate groups.

Parents for Peace has so far refused to take government money, and it insists on being apolitical. But its members are not shy about what families and communities are up against.

“We are experiencing a national crisis and we are extremely worried,” Churchill said.

She is worried because people she calls “groomers” are actively searching for and recruiting young people into extremist groups. That is why she wants to partner with those closest to them — parents, teachers, school nurses and pediatricians to counter the messaging and appeal of these groups.

She wants people to know that there are resources out there. And, as Shaikh’s and Buckley’s have shown, there is always a way out.