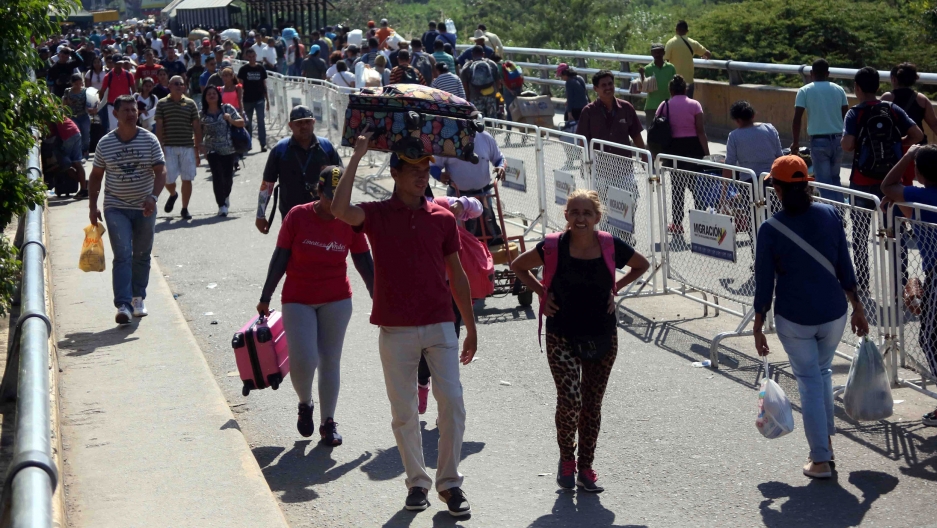 People walk across Simon Bolivar bridge at the border with Venezuela in Cucuta, Colombia, Feb. 6, 2020.

Twenty-one years ago this month, Hugo Chávez, a newcomer politician, took office in a country that stood out in the region due to its unusually long uninterrupted democratic tradition. He promised to change the country forever. He definitely succeeded, but not for the better.

When Chávez took the reins of Venezuela in February of 1999 after being democratically elected by a vast margin, the country’s problems were insignificant compared to those that emerged from his Bolivarian Revolution through him and his chosen successor, President Nicolás Maduro. Today’s Venezuela is characterized by an unprecedented humanitarian crisis with poverty rates above 90%, massive malnutrition, and precarious health indicators. It’s plagued by a destroyed economic apparatus with a suffocated private sector thriving despite numerous controls and hyperinflation.

The political environment is typical of a highly authoritarian and repressive dictatorial regime, with government critics and political opponents being imprisoned or forced into exile. The Bolivarian Revolution created one of the world's largest refugee crises since World War II.

Related: A Venezuelan cartoonist forced into exile still draws the repression back home

The worst part of this terrifying story is that, as of now, there is no hope of change, except one thing: the success of Interim President Juan Guaidó in achieving enough pressure on Maduro and his inner circle such that there will be a peaceful transition towards democracy out of the illegitimate regime that rules today’s Venezuela. However, since he became interim president over a year ago, and has been recognized as such by more than 50 countries, he has not been able to bring about the end of the dictatorship. Despite not having any de facto governing power, Guaidó still remains the face of Venezuelan’s struggle for democracy and continues to enjoy sufficient popularity, according to polls, compared to any other politicians in the country, including Maduro.

As hope continues to fade,  Guaidó caught us all by surprise last month when he defied his travel ban to leave Venezuela and traveled to countries in Latin America, Europe and North America to meet with foreign leaders, raise awareness and — perhaps more importantly — ask for help. On Tuesday, he returned to Venezuela to a chaotic scene at the airport as President Nicolas Maduro’s loyalists clashed with opposition lawmakers there to greet him.

The international community has thus far played a significant role in pressuring the regime, mostly by imposing individual sanctions on its members. The US has expanded its sanctions further by banning US persons from doing business with Venezuela’s illegitimate government. Yet, judging by the outcome, the sanctions have not resulted in putting enough pressure on Maduro and his inner circle to reach a genuine negotiation and call for free and fair elections to replace the fake ones that took place in May 2018.

Maduro and his regime, while inept when it comes to administering a country, have played their cards well when it comes to assuring their grip on power. At home, through repression and other autocratic means, he has reduced most possibilities for a non-traumatic transition by repressing peaceful protests, jailing and exiling political opponents, and buying the loyalty of the military and the other branches of government. In the international arena, his alliances with Russia and China have kept the international community unable to use vehicles like the United Nations Security Council to deal with these types of crises.

To put it mildly, Venezuela is in the middle of a stalemate that seems unlikely to solve itself.

While this is happening, the clock is ticking. The opposition-controlled Venezuelan National Assembly, the last bastion of democracy in the country, is set to be renewed sometime this year. The regime will use all the tools at its disposal to run a sham election so that it gains control, aiming to end Guaidó's legitimate claim to power.

Sooner rather than later, the international community and the interim government of Juan Guaidó must work together in rethinking a new strategy. This is not a trivial task, especially with an opposition that shows growing internal divisions, as it involves thinking about other actors and actions that could contribute to putting an end to the catastrophe called the Bolivarian Revolution. While there is a goal, it is unclear whether there is a strategy to achieve it. A strategy implies internal coordination and having a particular role for different actors. So far, it looks like this is lacking.

Investing time in crafting a new strategy, with humanitarian and refugee crises ongoing, might sound like a simplistic suggestion. But not defining a new strategy implies that the international community and the interim government will continue doing the same things and expect a different result.

Steve Jobs said the people who are crazy enough to think they can change the world are the ones who do. Change requires a strategy, even a crazy one. Without it, we can expect little to change.

Dany Bahar is a senior fellow in the Global Economy and Development program at the Brookings Institution.