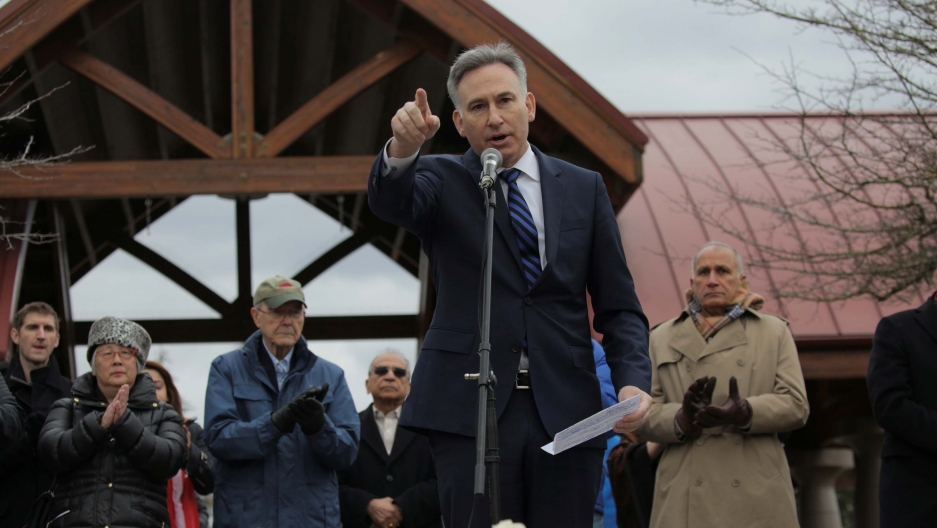 King County Executive Dow Constantine speaks during a vigil in honor of an immigrant from India who was shot and killed in Kansas, in Bellevue, Washington, on March 5, 2017.

The Department of Justice is turning up the heat on local and state governments rolling out so-called "sanctuary" policies to help undocumented immigrants.

Attorney General William Barr has announced new lawsuits this week against California, New Jersey and King County in Washington. All three places have sought to offer some protection for immigrants from federal immigration authorities and possible deportation.

Barr on Monday called the lawsuits "a significant escalation in the federal government's efforts to confront the resistance of 'sanctuary cities'."

The Justice Department is suing King County, which includes the city of Seattle, to force it to allow deportation flights to depart from the county-owned Boeing Field, officially called King County International Airport. Last year, King County Executive Dow Constantine signed an executive order to ban such flights, which are operated by Immigration Customs and Enforcement, a federal agency. The order is an example of sanctuary policies spreading throughout the nation in which jurisdictions are declining to cooperate with federal immigration authorities and carry out what they view as overzealous enforcement that violates immigrants' rights.

Related: The long, bipartisan history of dealing with immigrants harshly

Constantine spoke to The World's host Marco Werman about the lawsuit and how the county has pushed back on the Trump administration's efforts to deport immigrants.

Marco Werman: What did King County actually do that upset the Trump administration?

Dow Constantine: Well, thanks for having me. We run an international airport known as Boeing Field, and we came to find out that tens of thousands of immigrants in this country were being rounded up and deported through that airport on charter flights by the federal government. I issued an executive order stating that we would do anything within our power to stop that practice. It's inconsistent with county law and with the values of our region. And we will not be a party to this administration's political agenda. It's inhumanity to refugees and immigrants. We've been involved in an informal process with the FAA to sort through the legal issues and determine the authorities at the county and the federal government over King County International Airport, Boeing Field. Suddenly, the Trump administration decided to grab some headlines by circumventing that orderly process in filing a lawsuit.

As you probably heard, the federal government says that King County is interfering with its ability to enforce immigration law. How do you respond to that?

We, in King County, as a matter of county policy, made a choice not to facilitate this administration's campaign against refugees and immigrants. We will follow the law and we will invest our time and effort in helping people have their rights vindicated in court.

Interestingly, ICE has sent the planes from your airport, Boeing Field, to Yakima airport instead. It's about 150 miles away. So while you in King County might be complicating things, you're not really stopping the deportations.

But clearly that's going to be a continuing problem. We as a local government need to act consistently with our regional values. I believe they're having a robust conversation in Yakima about whether they want to be part of facilitating this Trump policy. Yakima is home to many, many immigrants from Mexico and Latin America who are feeling very threatened right now. And that community is having to do some soul-searching about the role that they're playing in this Trump policy.

How much authority does King County have over its cooperation with ICE?

We have a good deal of authority. Our law is very clear that we will not cooperate with federal authorities on deportation unless we are presented with a valid court order. When our judges say that someone is free to leave the jail because they have served their time, they're free to leave. And we will not respond to the order of a federal bureaucrat, but we will comply with the order of a judge. So if they bring us a warrant, we will treat it as any other warrant.

Are you confident that you'll win this case?

We're very confident we'll win this case. The executive order I issued makes it clear that we will operate within the bounds of the law. We will not take actions that will in any way harm immigrants, refugees or facilitate this cruel policy by the Trump administration. What we need is for Trump and Barr to quit focusing on punishing local jurisdictions and trying to intimidate us and others, and instead to turn their attention to comprehensive immigration reform in Congress.

This interview has been lightly edited and condensed for clarity. Reuters contributed to this story.