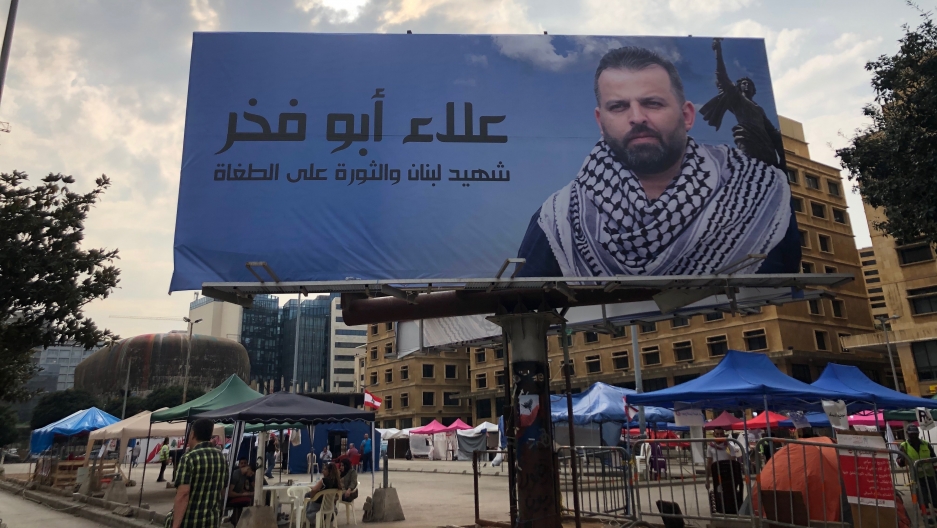 Vendors and civil society tents set up in Martyrs' Square under the photo of man who was killed during a roadblock in a suburb of Beirut.

Until Talal Zeidan was in his late teens, he had little chance to meet members of Lebanon’s other religious sects. Instead, Zeidan, who is from a town of mostly Druze sect in Lebanon’s Chouf mountains, grew up on stories and stereotypes of others, and he supported one of Lebanon’s sectarian political parties.

Only when he was around 18 did that change — thanks to a program specifically designed to bring youth from Lebanon’s different religious groups together.

“I realized that the community I belong to, and the political party I supported didn’t own the absolute truth. I realized they are trying to divide us.”

“I realized that the community I belong to, and the political party I supported didn’t own the absolute truth,” Zeidan said. “I realized they are trying to divide us.”

Zeidan, now an urban planner and architect, says the lack of public space and transport in Lebanon reinforces the country's sectarian divisions and politics.

“If I hadn’t had that opportunity, I might still support a sectarian political party,” Zeidan said.

Zeidan says Lebanon’s political leaders want to keep public spaces closed to keep people divided, and scared of each other, and dependent on their sectarian leaders. That’s helped them rule over the country since the end of the civil war in 1990, he says.

Since October, anti-government protesters have been in the streets demanding the fall of Lebanon’s sectarian-based government system. That hasn’t happened, but  Zeidan and others say, the protesters have succeeded in creating and reclaiming public space — a scarce resource in Lebanon.

Almost every time a Lebanese politician speaks publicly, or the government announces new reforms, protesters block the main bridge in Beirut that connects the east and west sides of the city. Brightly lit carts show up to sell corn and spiced hummus and fava beans. Some people bring musical instruments. At one point, there was even a fridge and flat-screen television with a sign that said “revolution and chill,” right in the middle of the highway. Protesters rolled out carpets, sat on couches and sipped beer. 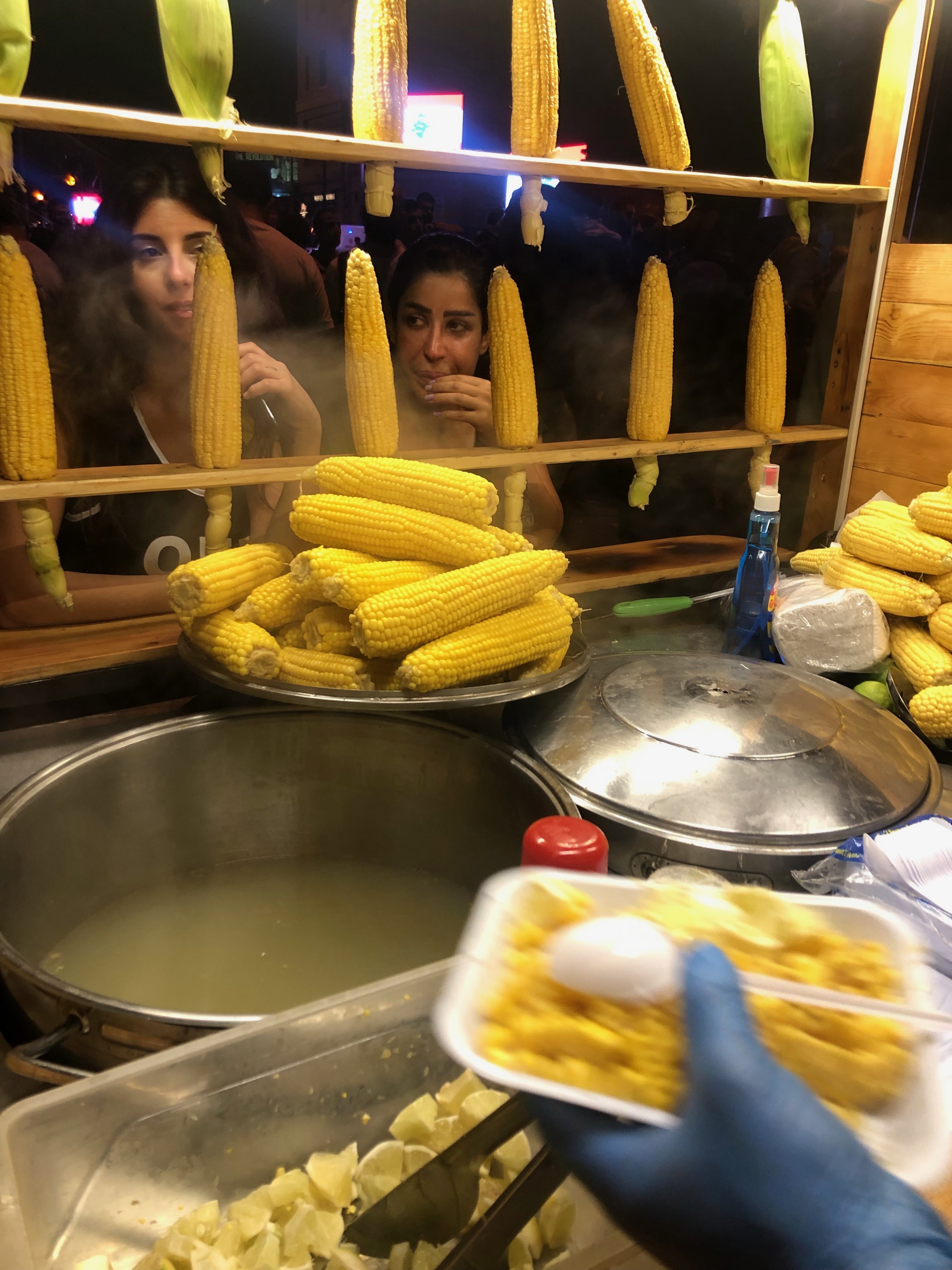 Protesters buy corn from a vendor on Beirut's Ring bridge during a road closure.

Zeidan always comes when there is a call to block the road. He says it’s about more than just protesting the government’s latest decision.

“People need a platform, a physical place where they can meet.”

“People need a platform, a physical place where they can meet,” he said.

In Lebanon, that’s hard to find. The corniche along Beirut’s waterfront is open to all, but there are few public parks. The lack of public space is something people here complain about often. Zeidan says it’s had a detrimental impact on the fabric of society. “Communication is key to breaking stereotypes,” he said.

It wasn’t always like this in Lebanon. Before the civil war, Martyrs’ Square was a vibrant public space in the center of Lebanon’s capital. Palms trees rose out of grassy lawns and gardens. People strolled past shops, restaurants and a large fountain. Cafés and kiosks lined the streets.

The square is named after a multisect group of Arab nationalists executed there by the Ottomans in 1916. There is a statue in their honor in the center of the square.

During much of Lebanon’s civil war, Martyrs’ Square was the front line. It was destroyed in the fighting and never restored. For decades, it has been little more than a big, empty space with a war-damaged statue in the middle.

“It became like a parking lot,” said Lucien Bourjeily, a filmmaker and theater director. “It’s not a square anymore.” Without the symbolic statue, it would be unrecognizable today.

“It was a sweet place. It was a beautiful place. It was a green place,” said Naji, 63, who wasn’t comfortable sharing his full name. When Naji was young, he would come to Martyrs' Square from his home in the southwest of the city. Buses arrived from all over the country and tram lines ran through the center. There was a bustling market where people from every part of the country came to sell goods.

“It was a downtown for everyone,” Naji said, adding that the area had mosques and churches, but no religious identity.

That’s not to say there was some sort of perfect coexistence among Lebanon’s many religious sects before the civil war. But the public square provided more opportunities for encounters and the sharing of physical space.

Lebanon’s civil war didn’t only destroy public space in the center of Beirut, it also put a stop to most of the country’s public transport.

Lebanon once had a rail system that ran the length of the country, connecting towns and villages, as well as buses and trams. Naji says that, too, had a unifying effect.

“What kind of people take the metro in London, or in Paris, or in New York?” Naji said. “Every kind of people. The people were mixed.”

Today, Lebanon has a small network of buses, but no rail system at all.

Bourjeily says this, too, is no accident. Lebanon’s sectarian political parties, he says, know that public space and public transport have the potential to unify people.

“There is a clear intention to do the exact opposite, which is keep the sectarian rhetoric omnipresent and to keep people divided.”

“There is a clear intention to do the exact opposite, which is, keep the sectarian rhetoric omnipresent and to keep people divided,” he said. 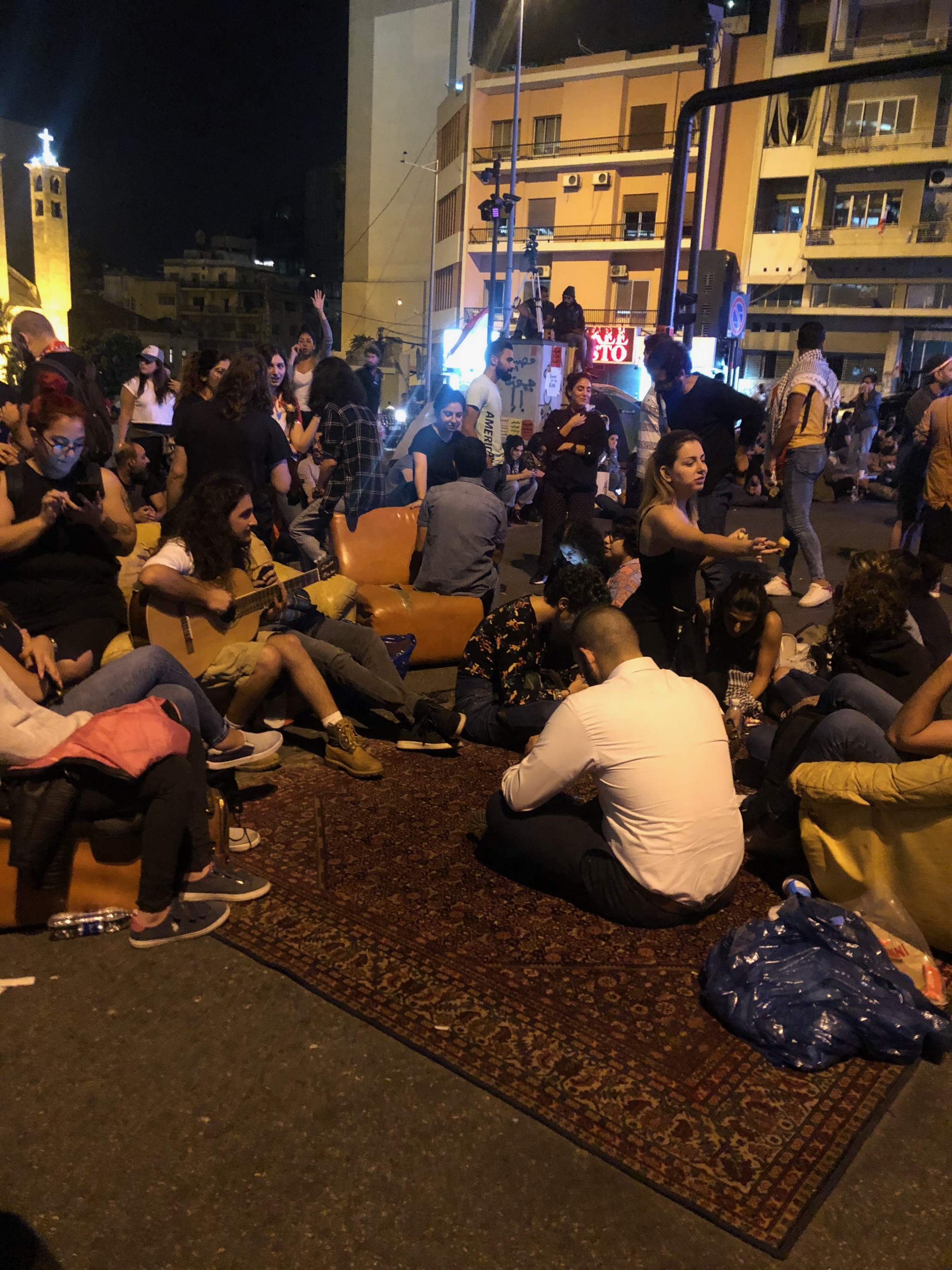 Protesters sit on a carpet as they block Beirut's Ring Bridge.

But for the past few months, all the roads into Martyr’s Square have been blocked, creating a massive pedestrian-only area that’s held the largest demonstrations in Beirut. And even when the square isn’t filled with chanting protesters, people visit food stalls and tents set up by civil society groups. At times, activists have hosted discussions here on topics like Lebanon’s legal system, workers’ rights and environmental issues. And all are welcome. Some even camp out for days at a time.

“These protests created a public space, created a public awareness that the people are united, even if they are from different religious backgrounds,” Zeidan said. “And this is the biggest threat for the traditional political parties. They are really afraid of the unity of the people.”

Like Zeidan, Bourjeily says that Lebanon’s sectarian divisions have been purposely maintained by Lebanon’s political elites.

“This would be killed with public spaces, this feeling of not knowing the other, of hating the other,” Bourjeily said.

That’s not to say that people don’t mix in Lebanon today. In some shopping districts and bars and restaurants, you can find people of all sectarian backgrounds. But there are few open, free public spaces. And Bourjeily says this is where Lebanon’s protest movement has succeeded.

“One of the great things that happened in the revolution is that people reclaimed these spaces,” Bourjeily said. 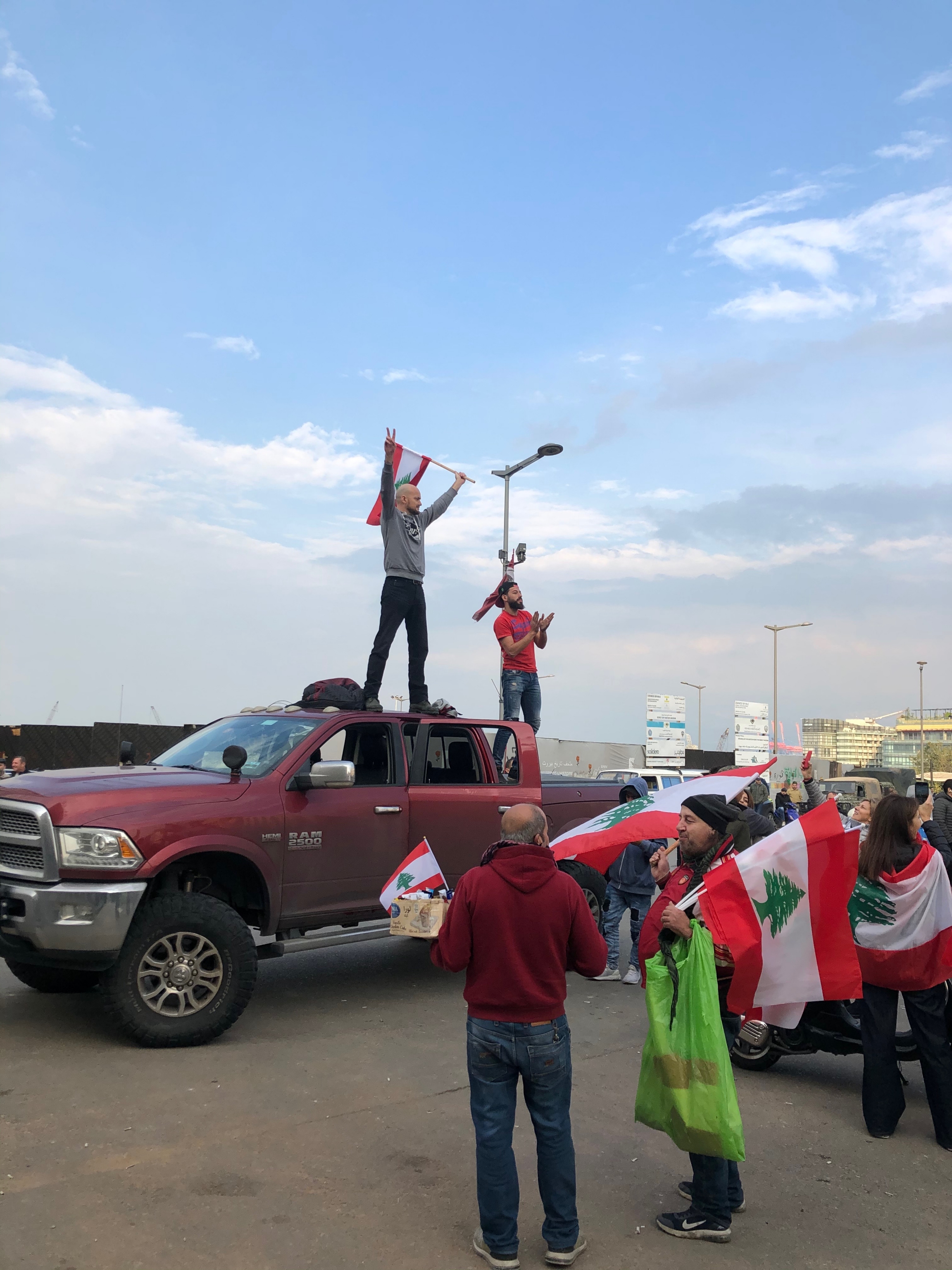 Protester uses his truck to block a road leading to Martyrs' Square in Beirut.