Zhang Yuan Yuan, a 29-year-old doctor from Beijing, wanted to hit all the top spots on her trip to Russia. She and her husband would spend three days in Moscow, three days in Saint Petersburg and then — like thousands of other Chinese tourists this year — travel to Teriberka, a tiny settlement in the Russian Arctic, that until recently was a dying fishing village.

Teriberka is not the first destination in Russia to face a burst of Chinese tourism. But, 100 miles from the nearest city, accessed via a road that in recent winters has been closed for days at a time after heavy snowfall — it could be the most remote.

Related: The sun sometimes rises: How one Russian city makes it through the polar night

Every day, dozens of visitors drag their suitcases past abandoned buildings to an increasing number of hotels and private apartments for rent. They come to what locals call “the edge of the earth” with the hope of seeing the Northern Lights at a fraction of the cost of similar trips to Scandinavia, Iceland or Canada. 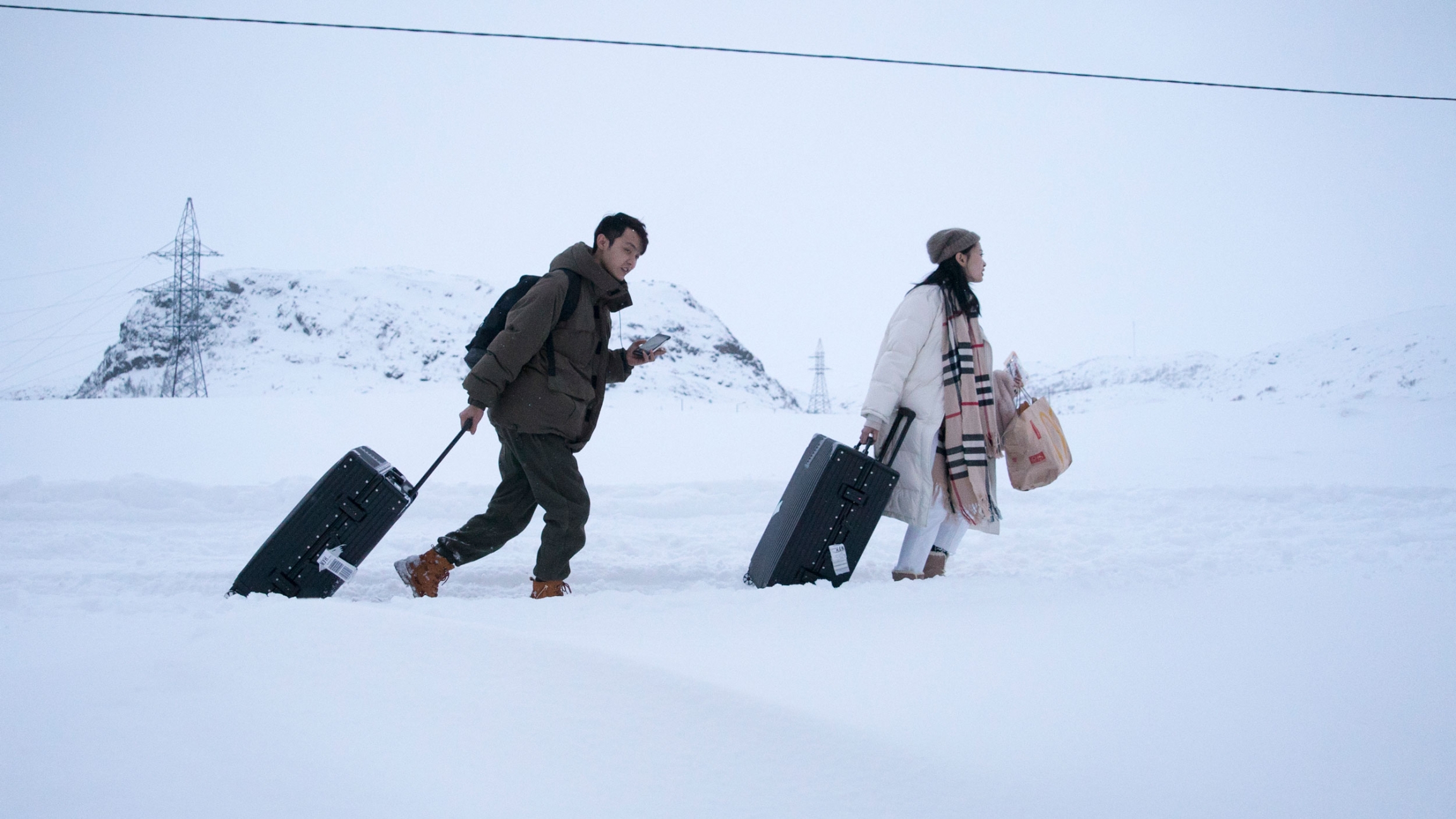 Even Zhang, who traveled before the novel coronavirus outbreak in China, is surprised by the number of her compatriots who have made the journey to far northwestern Russia, either as independent travelers or with organized tours. “We don’t like it when there are so many Chinese people,” she said, in a restaurant that overlooks a snow-covered beach on the Barents Sea.

“We are in a hotel with four Chinese neighbors and they are very noisy,” she told The World. 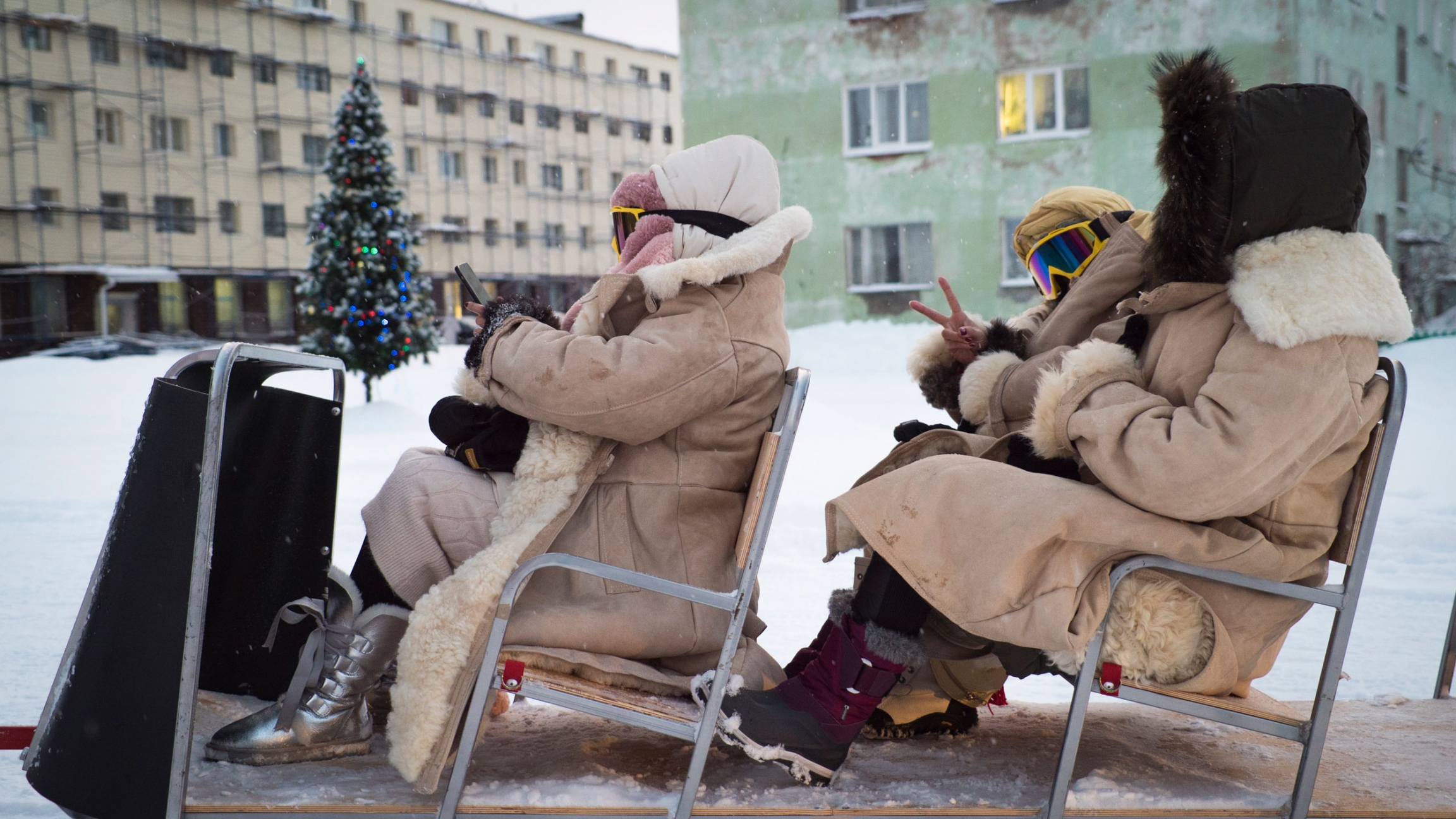 Tourists from China sit in a snowmobile trailer in Teriberka, Russia.

At the end of January, China imposed a ban on outbound tourist groups because of the coronavirus outbreak — a move that will lead to a fall in visitors and temporary loss of local income. But despite the ban, some Chinese visitors have been able to continue to make the journey to Teriberka.

Asian visitors began coming in greater numbers to Teriberka in 2015, following the devaluation of the ruble and a relaxed visa regime for citizens of China. The regional government says there has been a 100-fold increase in Chinese tourism over the last seven years, from around 160 in 2013 to more than 16,000 in 2019. 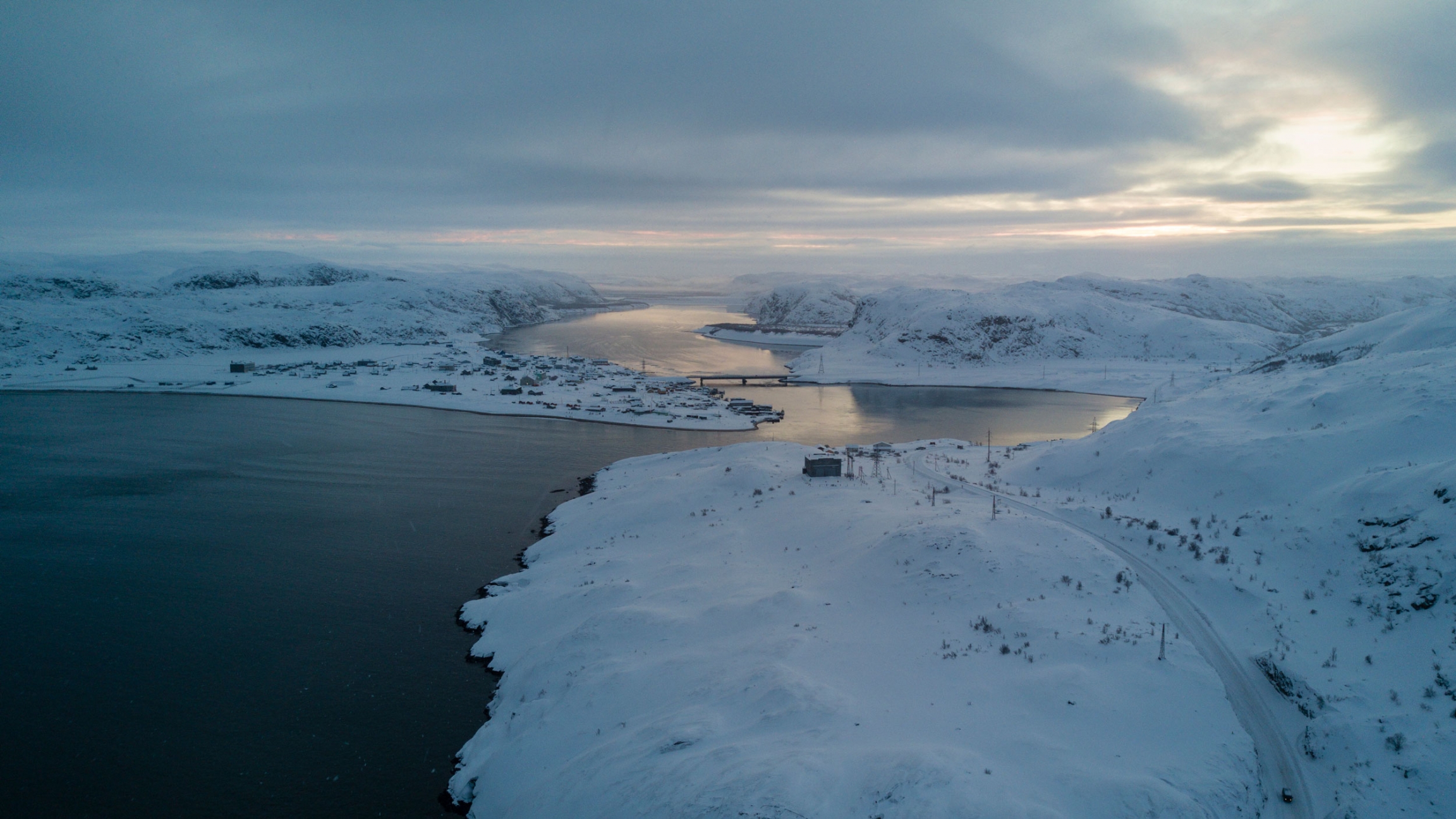 An aerial view of Teriberka village, the Teriberka river and the Barents Sea coast.

And digital media has been a force behind the boom. “One glance at the lonely, quiet Arctic Ocean will be remembered for a lifetime,” reads one Chinese blog post that recounts a trip to the village. “The Russian aurora is very cost-effective,” promises another.

Several Teriberka locals said the Chinese were drawn by the belief that any child conceived under the Northern Lights will be lucky, or a boy — some, like retired ship stoker Nikolai, even claimed to have seen visitors making love in the snow. “It’s what they come for, everybody knows about it,” said the 69-year-old, who did not share his last name, as he made his daily walk around the bay.

Related: Jesus' Bethlehem birthplace gets a makeover. Will it boost tourism?

But few guests say they are aware of the myth. Hotel owner and guide Alexander Gulimchuk suggested it was invented by travel agencies in northern Russia and Scandinavia to drum up business. 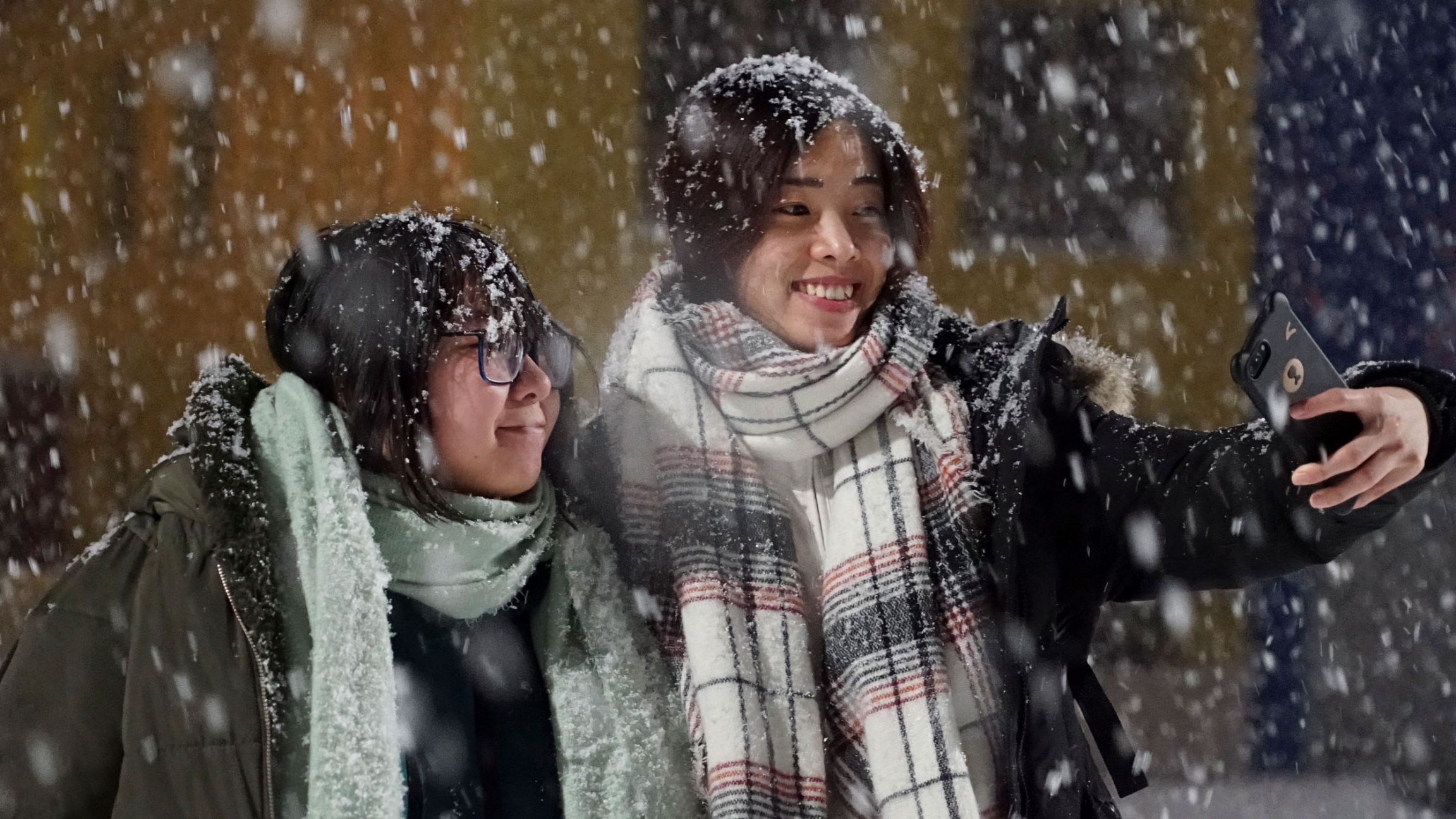 Tourists from China take a selfie in Teriberka, Russia.

“Only around 5 or 10% of people coming here have even heard about it,” he said as he directed a group of four visitors away from the Barents beach to a nearby animal pen where tourists can pet reindeer or huskies for $3. “Most of the people who come here aren’t couples anyway — it’s families, older people. They just come to see the lights.”

Gulimchuk, 61, has lived in Teriberka since the 1980s and seen its population decline from a peak of several thousand to just 600 today. A barren hillside, where a collective farm and houses once stood, overlooks a bay scattered with the remains of wooden boats. A fish processing plant shut up operations years ago and a three-story school building is empty, with books, maps and charts strewn across the floor. Nearby is the shell of a Soviet-era hospital. 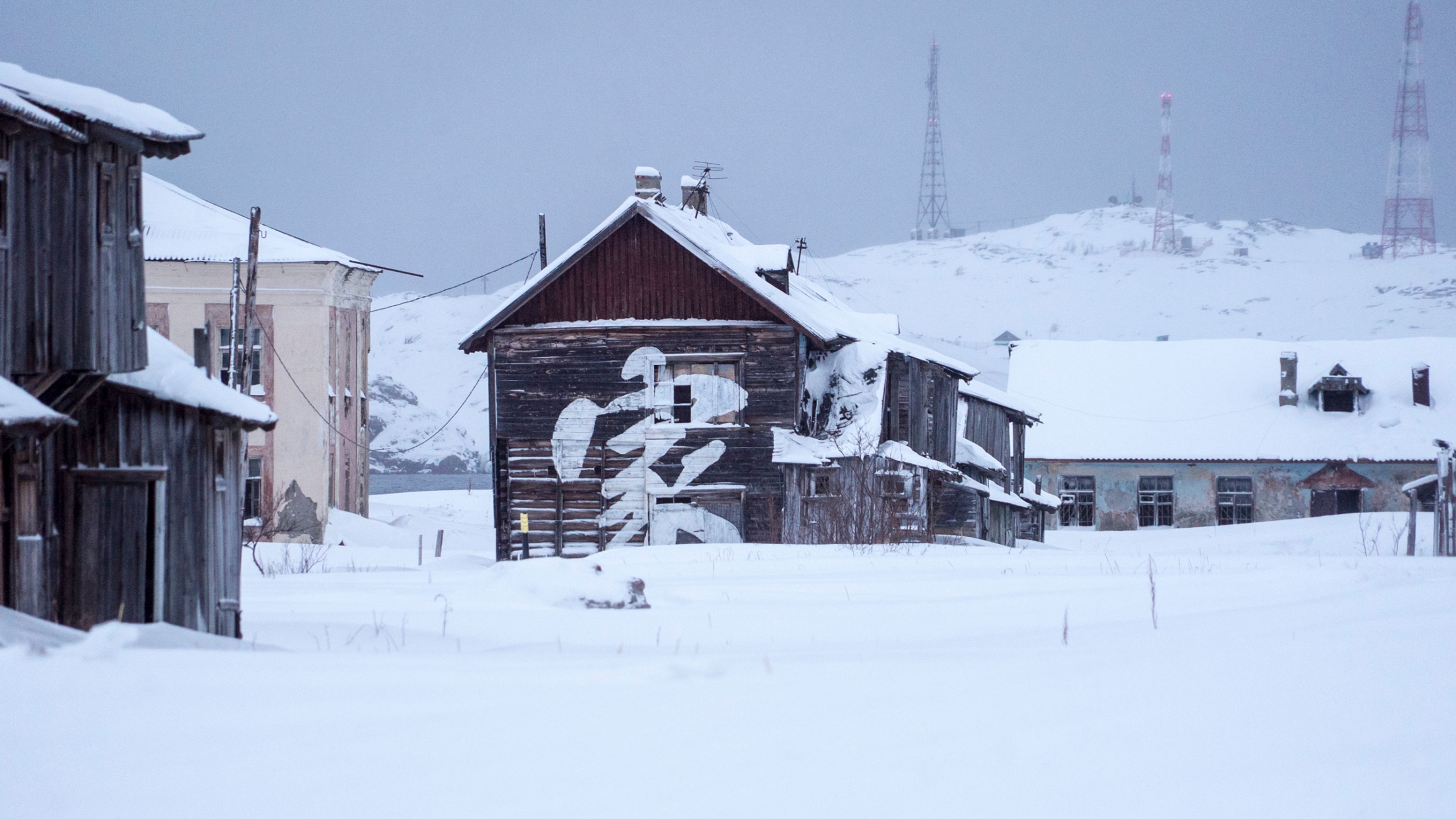 The word "house/family" in Chinese is painted on an abandoned house in Teriberka, Russia.

Some of Teriberka’s residents are ready to take advantage of the business opportunities offered by tourism: Taxi drivers charge Chinese visitors up to 10 times the usual rate, and prices in restaurants are the same as in Moscow, if not higher. But others complain about guests making noise or leaving trash in unspoiled nature, and worry about Chinese businesses buying up land or investing in hotels.

Their worries reflect wider Russian anxieties about Chinese activity: not just in the Arctic, where Beijing, like Russia, is boosting its commercial presence, but also in regions close to the two countries’ border in Siberia, where China is investing in property and resources.

In 2014, Teriberka came to international attention as the setting for Andrey Zvyagintsev’s Oscar-nominated film “Leviathan,” which painted a bleak picture of corruption and alcoholism in the Russian provinces.

Gulimchuk and other locals said that it was an unfair portrayal of their home, but it led to the first significant boost in tourism. The village now hosts an annual New Life festival of music and culture that brings in thousands of visitors from Russia and abroad during the summer.

In the long term, demand is expected to grow. Gulimchuk is building new luxury accommodation near the three-bedroom guesthouse and three cottages he already owns. 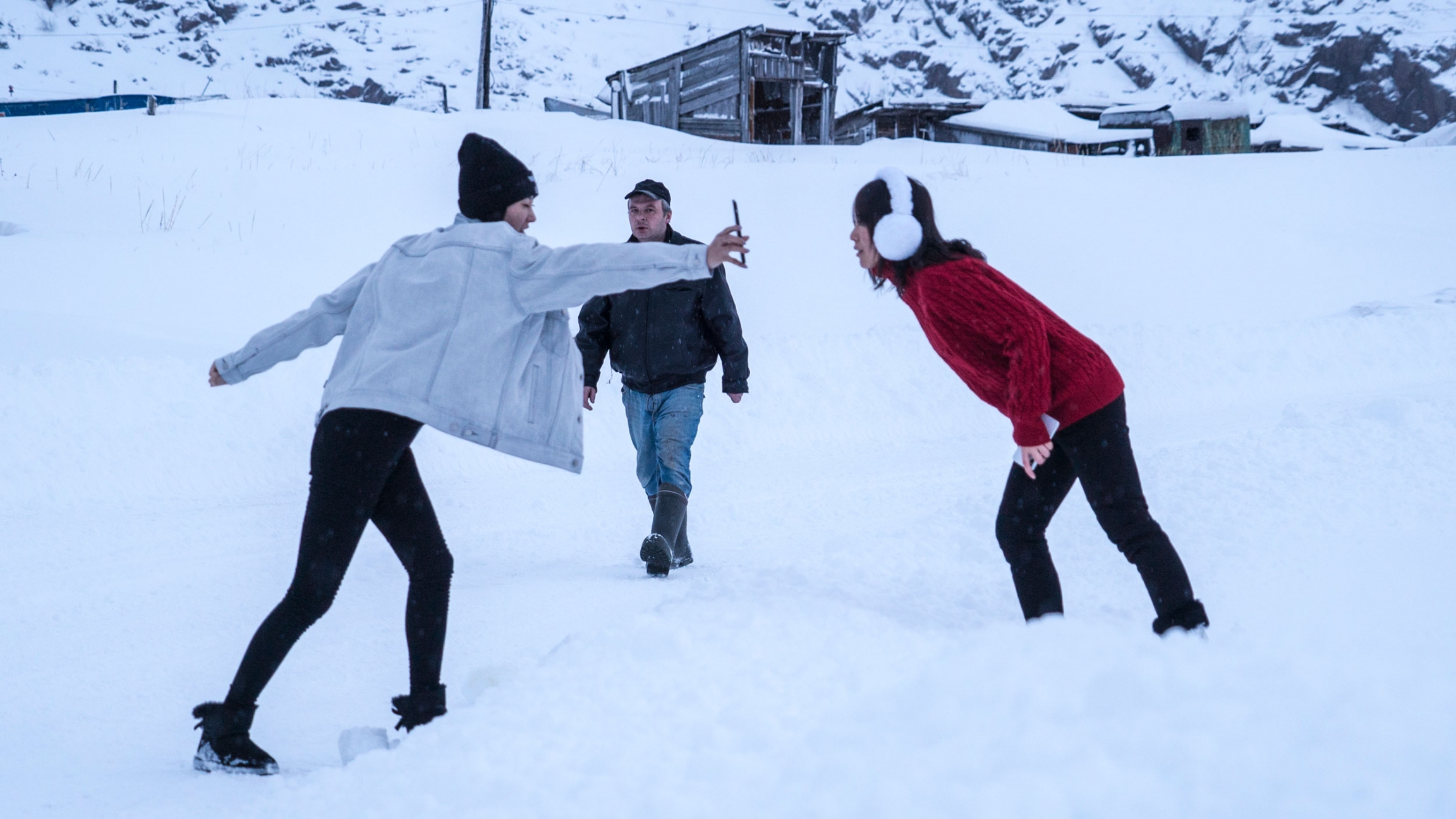 A tourist from China shows her phone to another tourist with a local from Teriberka walking past.

“Most of the guests are well behaved, especially from the older generation,” he said. “You go into the rooms after and you hardly know anyone has been living there. But some of them think they have paid their money and then they can do what they want.”

“They are not so friendly toward foreign people. ... They do not want to help so much — when we try to talk, they say ‘no English, no Chinese.'"

And tourists have their own complaints about the villagers. “They are not so friendly toward foreign people,” said Wendy Liu, a 40-year old housewife from southwestern China who had come on a trip with a girlfriend. “They do not want to help so much — when we try to talk, they say ‘no English, no Chinese.'” Liu said she was relying on a translation app to communicate.

But for local official Elena Kryvonos, the village has little choice but to welcome tourism and ensure that the boost benefits both the visitors and Teriberka. The settlement is a particular attraction as it is one of the few areas on this Arctic coast accessible without a special permit — access to the rest has been restricted since the Soviet period because of military bases in the region. 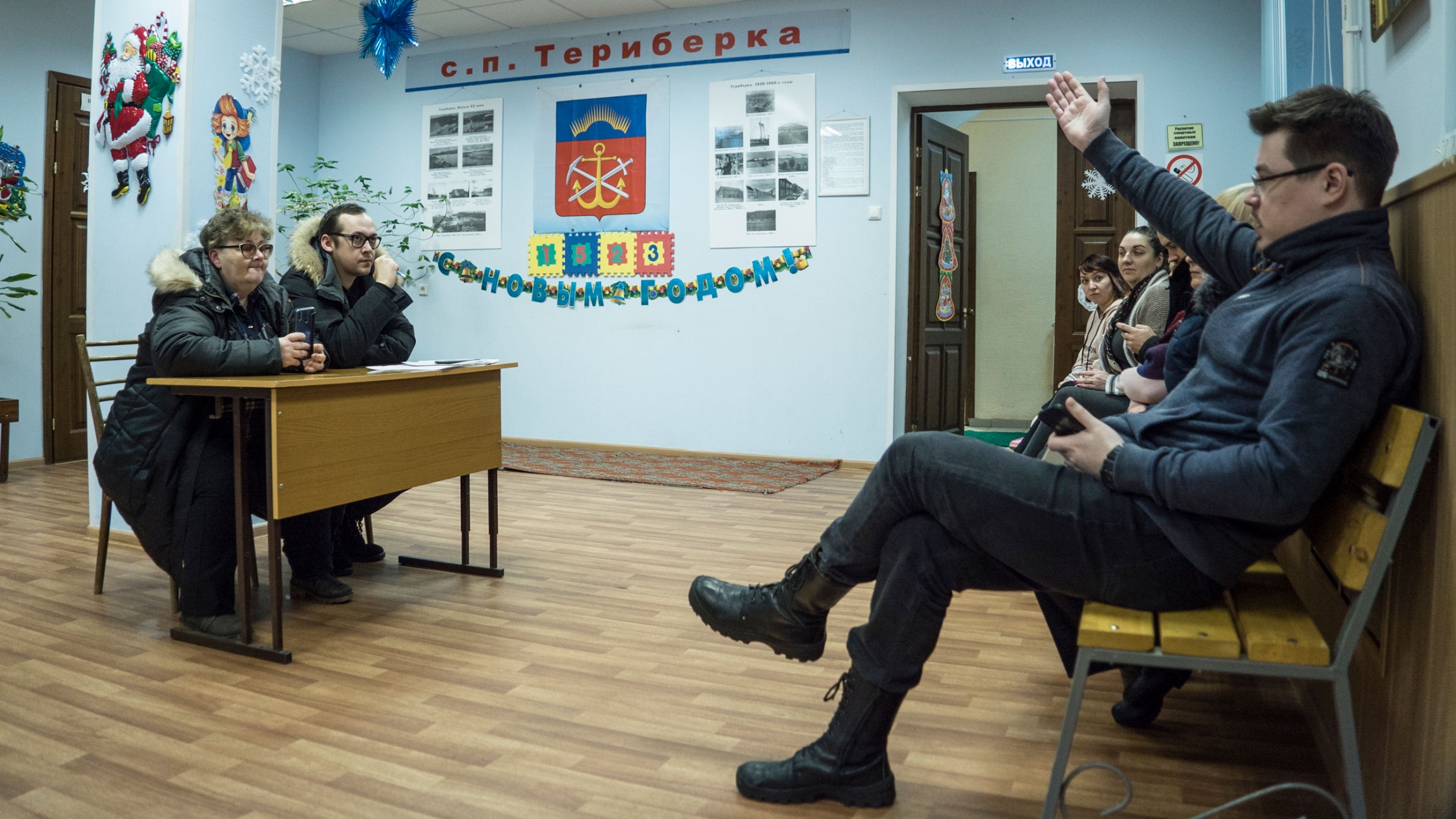 Elena Krivonos (L), at a meeting for the administration of Teriberka with the local people in the local House of Culture, Teriberka, Russia.

“What other hope is there? I can’t see any ... There’s no work, there are not enough children being born here. This is the fate of little villages all over the world.”

“What other hope is there? I can’t see any ... There’s no work, there are not enough children being born here. This is the fate of little villages all over the world.”

For now, though, locals who do not work directly with tourists have gained little from Teriberka’s newfound popularity. “People come here, maybe they spend a few hundred rubles in a shop and then they leave. It doesn’t add a single kopek to the municipal budget,” said Kyrvonos, 57. She called for greater investment in infrastructure and the introduction of a tourist tax.

Dineke Koerts, a specialist in Chinese tourism at the Breda University of Applied Sciences in the Netherlands, agreed that Teriberka would have to take control over the kind of tourism it was attracting if it wanted to feel the benefits.

“Big tour groups can be quite a hassle to small villages."

“Big tour groups can be quite a hassle to small villages,” she said during a phone interview with The World. “Problems with bad behavior tend to focus on these groups, where people might not have been outside of China before, they aren’t so well-traveled.” 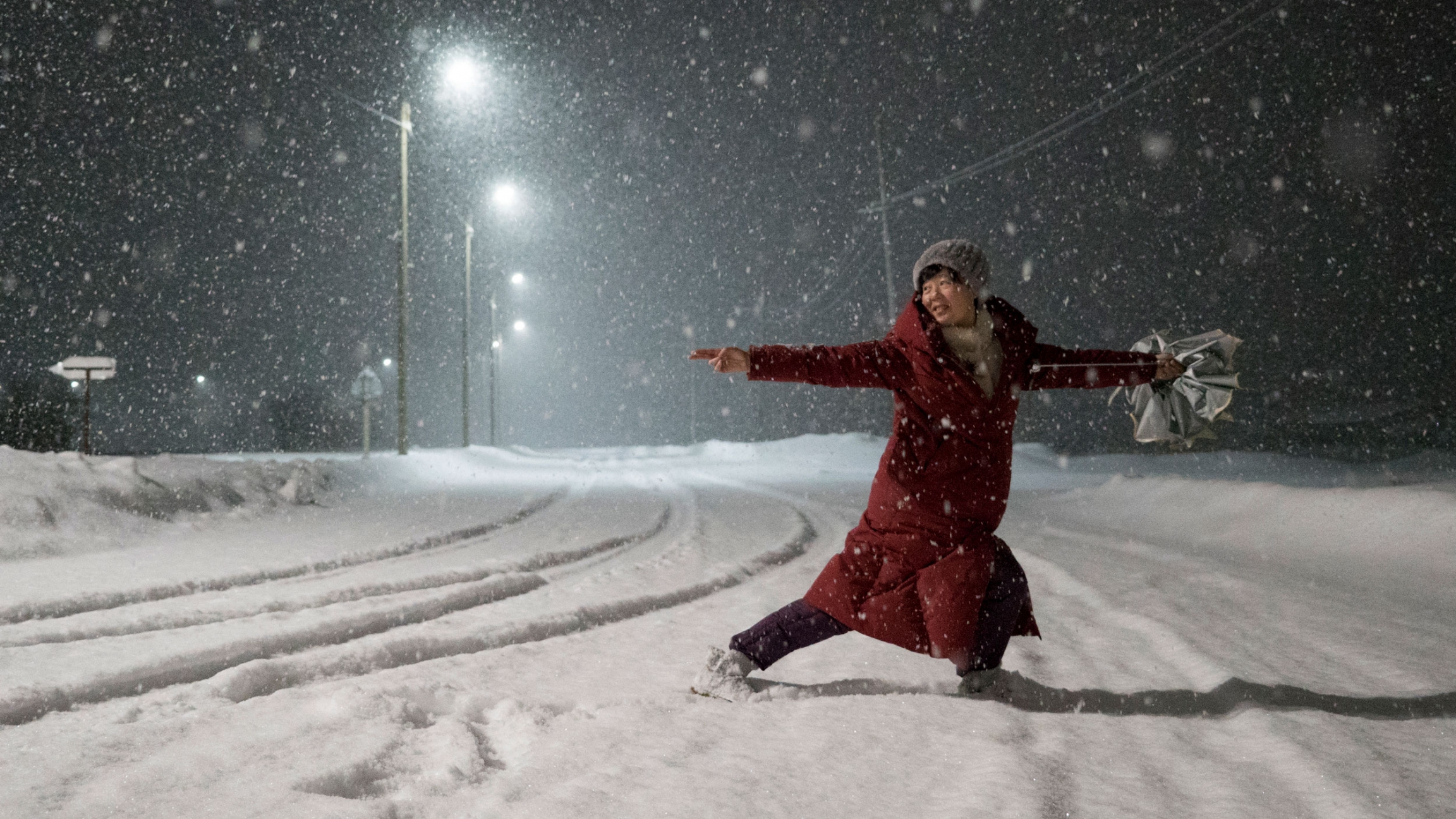 A Chinese tourist dances while waiting for bus departure in Teriberka, Russia.

As much as possible, Koerts suggests, Teriberka should resist big hotels, especially ones owned or controlled by Chinese businesses — though sources have told Russian media that Chinese are already investing in the area, including in a tourist complex outside Murmansk, the largest city in the region.

Related: The Arctic's Sámi people push for a sustainable Norway

“This means there will be more Chinese-organized tours and little money will go to local people.”

Koerts suggested the village should work to attract individual adventure travelers by promoting activities beyond just seeing the Northern Lights.

Zhang and her husband might feel the same. After two days, despite being lucky enough to see the Aurora Borealis on their first night, they described Teriberka as “too small” and “lonely and boring,” complaining there was little to do except to walk.

Still, their pictures of the lights were getting a good response on social media. Whatever their reservations, they were going to recommend the village to their friends back home. 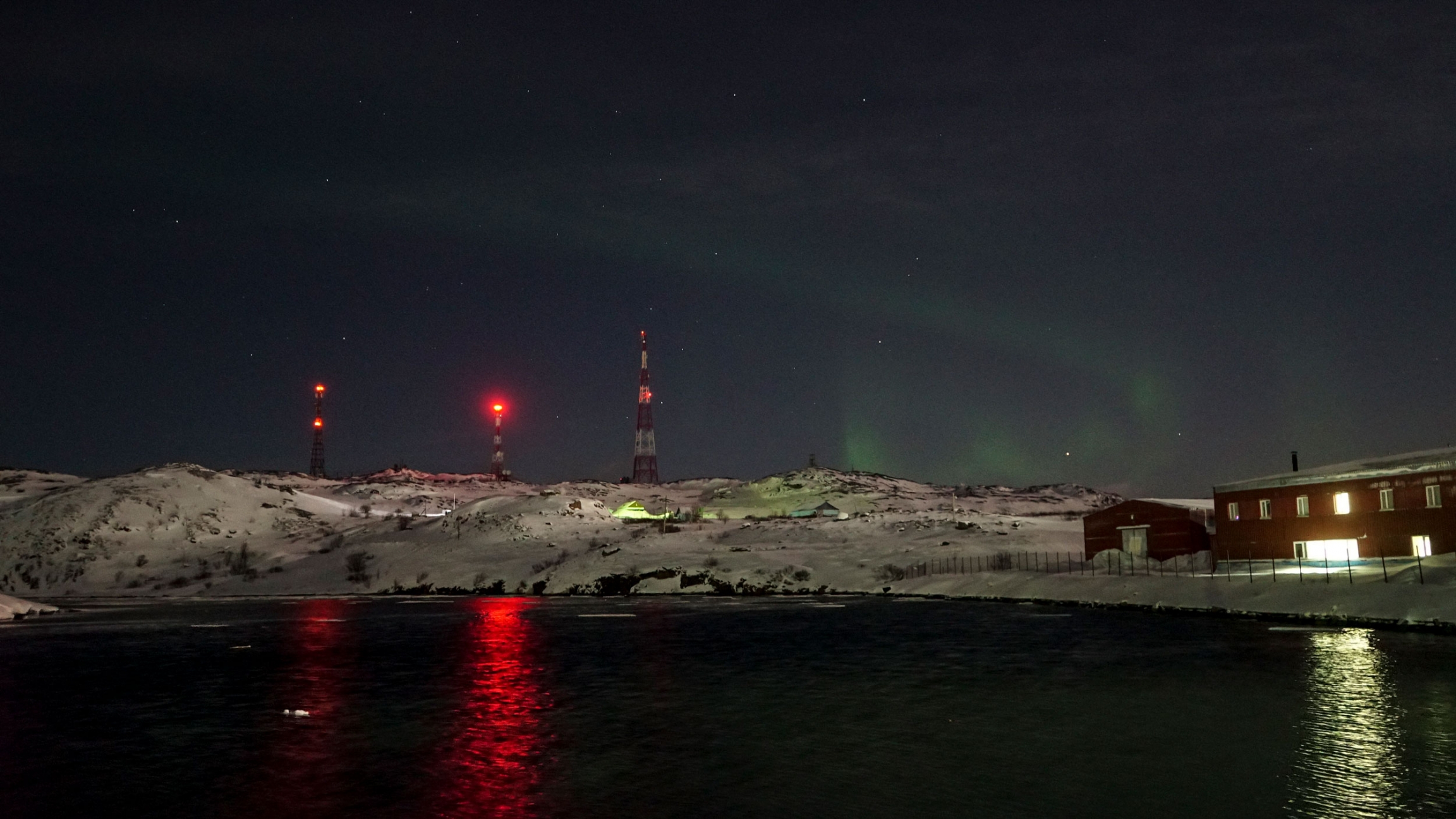 The northern lights at night in Teriberka, Russia.