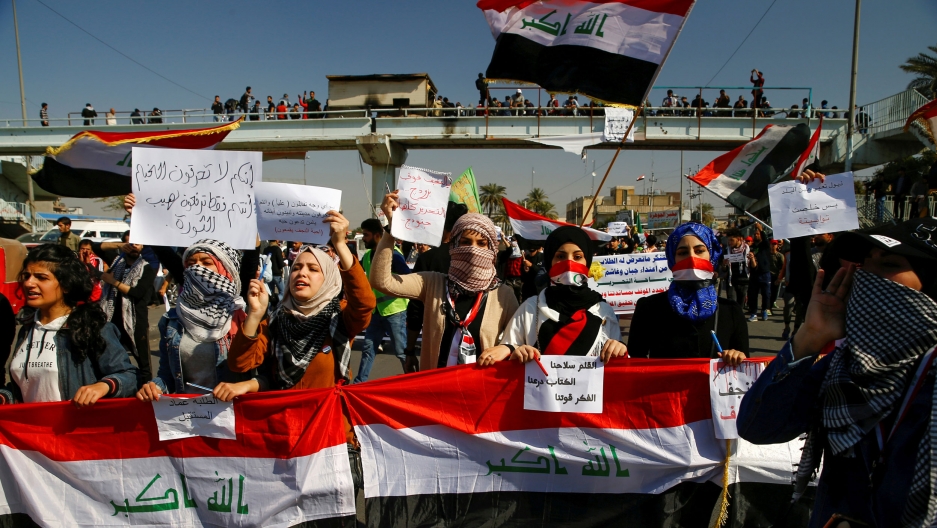 Since last October, Iraqis have staged peaceful anti-government protests throughout Baghdad and the southern provinces. These mass protest movements have drawn attention for their unifying nationalistic rhetoric, their irreverence for traditional societal and political figures, and for their strict adherence to peaceful means in the face of increasing brutality by the government’s forces and paramilitary groups.

In reaction, various establishment actors have tried to redirect the protests in different ways. This has included direct actions against the protesters as well as more subtle attempts to mediate pathways to internal reform. The Iraqi public has been unevenly split between those who are unconvinced by the potential for internal reform and those who are willing to try. The most recent manifestation of this is the public reaction to the nomination of Mohammed Tawfiq Allawi as prime minister-designate. Although the majority of protesters have rejected Allawi’s nomination, there are some who advocate giving him a chance.

Related: Raised by war: This is what it's like to come of age in Iraq

The direct challenges against Iraqi protesters have been orchestrated by both local and foreign actors. The Iraqi protest movement has been under siege since its earliest days. This includes the actions of the Iraqi government itself, which employed various means of violence against protesters, including the lethal use of tear gas canisters fired directly at crowds. Paramilitary groups associated with the political elites resorted to live bullets and various intimidation techniques, including the kidnapping and torture of activists. As a result, over 600 deaths and thousands of injuries have been reported in the last four months.

Most recently, some of the supporters of Muqtada Al-Sadr, a prominent Islamist cleric, have turned against the protest movement and have attempted to forcefully shut it down. In Baghdad, they have taken over the Turkish Restaurant, a large building in Tahrir Square that served as the focal point of the protests. These “Blue Hats” associated with Muqtada Al-Sadr have collided violently with protesters throughout the south as well. On Thursday, reports indicate that 8 protesters were killed and 52 were injured in clashes in the holy city of Najaf.

But it’s not just domestic security forces that have threatened the Iraqi protest movement. It has also become a casualty of Iraq’s position as a zone of foreign competition. The American decision to assassinate Iranian top general, Qasem Soleimani, also the deputy head of the Popular Mobilization Forces, Abu Mahdi Al-Mohandes, led to a dizzying acceleration of threats and promised confrontations between Iran and the United States, all on Iraqi soil. And while many observers rightfully warned of the repercussions of this complete dismissal of Iraqi sovereignty (on the part of the Americans and the Iranians), the harm that these actions wrought on Iraqi protesters is less often highlighted.

First, many protesters have faced accusations of being American agents and have become targets of reprisals by armed factions. Secondly, American attempts to legitimize their actions by emphasizing some of the anti-Iranian tones of the protests further endangered Iraqi protesters, whose rejection of all foreign intervention in their country was ignored. Inadvertently, American actions posthumously transformed Soleimiani and Mohandes into larger-than-life figures within the country, whereby even Iraq’s most supreme Shiite cleric, Grand Ayatollah Ali Al-Sistani, wrote a letter of mourning to the supreme leader of Iran, Ali Khamenei.

At the same time, Sistani’s public statements about the protest movements — issued through the Friday prayer sermons of his representatives in Karbala — have called for mediation and internal reform, while acknowledging protesters’ demands. Sistani has previously called for other internal reforms including the resignation of the prime minister, Adil Abdul-Mahdi, and for early elections. This informal endorsement of the political system by proposing solutions from within its structure is perhaps in opposition to the demands of the protesters.

The religious establishment, historically wary of political instability and “chaos,” will support Allawi’s nomination as a form of reform from within. However, Allawi’s nomination by the current political elite, including Sadr, as well as his tenure as a former MP and Minister of Communications has made him unpalatable to many of the protesters. Allawi’s overtures towards the protesters — including urging them to continue to demand their rights through protest and describing himself as their “employee” — have fallen upon deaf ears. Some protesters, however, have called on Iraqis to allow Allawi a chance to demonstrate his commitment to his promises. These promises include early elections, justice for violence committed against protesters, and the formation of a representative government outside of the ethno-sectarian quota. In the wake of the attacks on protesters in Najaf, Allawi has been among the first to condemn and to reiterate the need to hold accountable those who perpetrated crimes against protesters. He describes the spilling of Iraqi blood as his “red line.”

Among Iraqis, there are some who seek reform from within the system and some who believe that only more drastic changes will achieve results. While many of the protesters fall into the latter camp — questioning the validity of any solution proposed from within the political establishment — a minority have expressed a willingness to give Allawi a chance. The path of internal reforms, however, is not necessarily an easy nor straightforward one, even if protesters decide to endorse it. For one, it is difficult to push any candidate through Iraq’s political system. Although nominated, Allawi’s premiership and government needs to be approved by parliament.

Iraqi protesters who have persisted through violence and through international interference will likely push forward. They have been operating in an environment in which every elite actor has either tried to co-opt them, shut them down, or minimize them. Despite these challenges, they have made political gains, the most significant of which is the recognition by all parties that legitimacy can only come from the people.