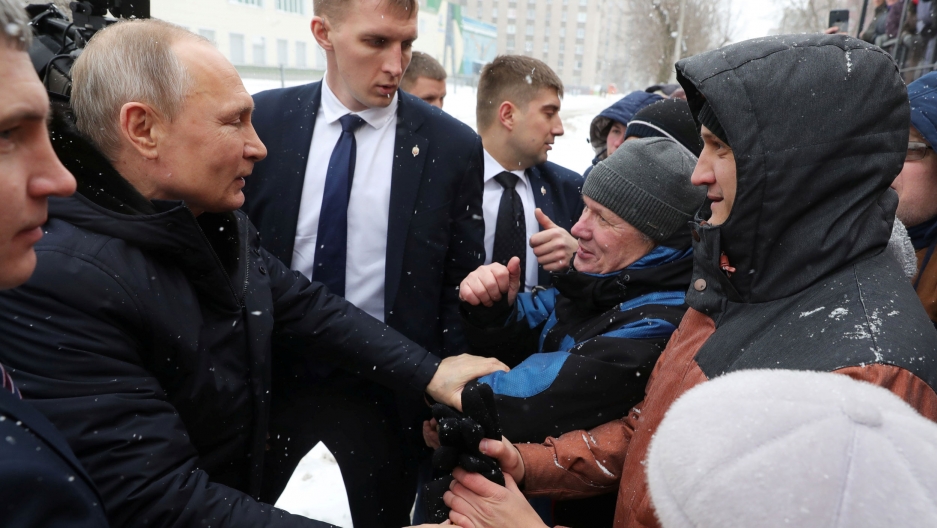 Russia and Ukraine have been all over the news cycle recently, first, because of the Mueller investigation, and now, with the impeachment of US President Donald Trump unfolding in Congress.

Related: How to make music out of the Mueller report redactions

The impeachment investigation was set in motion after a whistleblower issued a complaint that dealt with a phone call between Donald Trump and Ukrainian President Volodymyr Zelenskiy. In the phone call, Trump appears to ask Zelenskiy to investigate his political rivals in exchange for the release of military aid that the administration had held up.

The phone call took place on July 25 of last year, just one day after Special Counsel Robert Mueller testified before the House of Representatives about his investigation into Russian interference in the 2016 elections and suspicious links between the Trump campaign and Russian officials.

Mueller Report: Did Trump commit conspiracy? No. But collusion? Maybe.

But with all the details regarding the phone call, testimonies, inquiries and investigations, the question still remains: Are we getting the full story out of Russia and Ukraine?

Joshua Yaffa lives in Russia and is the Moscow correspondent for The New Yorker magazine. In his new book, “Between Two Fires: Truth, Ambition, and Compromise in Putin's Russia,” he writes about how complicated life is in President Vladimir Putin's Russia, and how — to some degree — he found the same in Ukraine.

“People aren't so cleanly divided into the oppressor and the oppressed. In fact, most people live their lives somewhere in the middle,” Yaffa said. “People with understandable, even admirable ambitions, motives, things they want to accomplish in their lives — the way you act those out, the way you realize them is, is by engaging the state in one way or another and deciding where you bend and in the service of what goal.”

Yaffa spoke with The World’s host Marco Werman about people caught between trying to support and defy Putin's regime.

Marco Werman: So, these people are kind of caught between those bookends. And I guess those are the two fires in the title, "Between Two Fires."

Joshua Yaffa: Exactly. "Between two fires" is a Russian saying and it's kind of like "between a rock and a hard place." You're stuck between two forces larger than yourself. Making it out the other side is just about the best outcome available.

So, when it comes to the compromise part, you meet a man who really has to adjust his expectations of the Kremlin as this kind of all-benevolent power. And this guy, Oleg, is a great example because his story kind of gets at something that's really in the air right now: corruption in this part of the world, Ukraine and Russia — I guess what the particular flavor of corruption is in Crimea. This is a Russian named Oleg Zubkov. Crazy story. He's a zookeeper who ends up with a safari park in Crimea. How did that happen?

He's a really larger-than-life guy. He is originally from Russia. He thought of himself and thinks of himself as a Russian. And he didn't really break a sweat about Crimea being part of Ukraine. But like a lot of people in Crimea, frankly, he fell under the sway of the successful Kremlin propaganda campaign in 2014 and became a quite enthusiastic supporter of annexation.

So, once Crimea is annexed by Russia, how does Oleg’s life change?

Dramatically, as it changed for lots of people in Crimea. He used to have all of his supply chains coming through mainland Ukraine. After annexation, he had to come up with new supply chains. And so now, the prices for everything that Zubkov needs for the park have gone up. So it's become a real difficulty for him, not to mention after annexation, he and his parks became a target for local law enforcement agencies and he's found himself spending well over 100 days a year wrapped up in these Kafkaesque court proceedings.

Related: Pompeo heads to Kyiv under shadow of political 'theater'

Josh, you also write about Elizaveta Glinka, Dr. Lisa, as she's known — something of a saint, it seems, and that's not really hyperbole. What is her story?

Dr. Lisa came to prominence in Russia in the mid-2000s when she became really a pioneer of palliative care. She lived for some time with her husband in Vermont, where she encountered a hospice for the first time and upon her return to Russia, she began doing something of the same with terminally ill patients in Moscow and no one was really doing that before.

And going into the Donbass in eastern Ukraine and helping all people who were injured, correct?

Right, well, that's the great turning point in her life after 2014, the outbreak of war in eastern Ukraine, in which there were very real victims and Dr. Lisa couldn't not help those in need. And when she learned that there were dozens, if not hundreds of children trapped in the war zone, she appealed to the Kremlin. Essentially, she appealed to those in power to give her the resources she needed to be able to get those people out of eastern Ukraine, to get them necessary medical care back in Russia and that set in motion a relationship that would really change the way she was viewed by many in Russia.

It was her relationship with the Kremlin, which both gave her more and more opportunities to help more and more people — but it was that closeness to the state that also drew a lot of criticism, that she allowed Putin to act the humanitarian in a conflict that he in fact bore primary responsibility for creating. The tragic coda in Dr. Lisa's life is what that proximity to power eventually meant for her. After Russia entered the war in Syria in 2015, she performed a similar kind of function as she had in Ukraine though this time with less enthusiasm, it sounds like. When the defense ministry asked her to go to Syria, she felt compelled to do that, as well. And on one of those trips, she was flying to Syria — that plane crashed shortly after takeoff, killing everyone on board, including Dr. Lisa, quite tragically. Her proximity to power was the very thing that killed her. She wouldn't have been on that plane flying to Syria if she wasn't participating in the state mission.

Series from The World: Generation Putin

Josh, with both Dr. Lisa and the story of the zookeeper, Oleg Zubkov — is the lesson kind of, if you're out there in Russia doing public work, can you manage to steer in a political path?

I think there is something that becomes unavoidable about negotiating and navigating compromise with the state. If you have ambitions that allow you to rise to a certain level, you do confront this inevitable dilemma of compromise because the state is so ever present.

I just want to ask you about Ukraine's president, Volodymyr Zelenskiy. You met him back in August, profiled him for The New Yorker. What did he tell you?

I met Zelenskiy at what now, in hindsight, turns out to be a very interesting moment because the story about what Trump and the associates around him were doing in Ukraine hadn't really broken yet, but a lot had just transpired at the moment I saw Zelenskiy and he vaguely alluded to some difficulties with the US large powers — think of geopolitics as a chess game but Zelenskiy is not going to allow Ukraine to be used as a pawn. It's clear that he was uneasy about navigating what was expected of him from the US, while also preserving Ukrainian interests. Of course, his position is much weaker if the US is absent and much stronger if the US is there getting Ukraine's back.

So, Josh, "Between Two Fires" clearly shows, you know, the real stories from this part of the world. So, what are Americans not hearing?

There's an American understanding of Russia as a place where a dictator, Putin, and his cronies keep a population locked in a cage with repression and propaganda against their will. But it's a very incomplete part of the story. Most people are really trying to get by, to live their lives. Most people really are in between, and I think that's a more telling and illustrative way of understanding Russia. But I think that's also the story of so many of our societies.