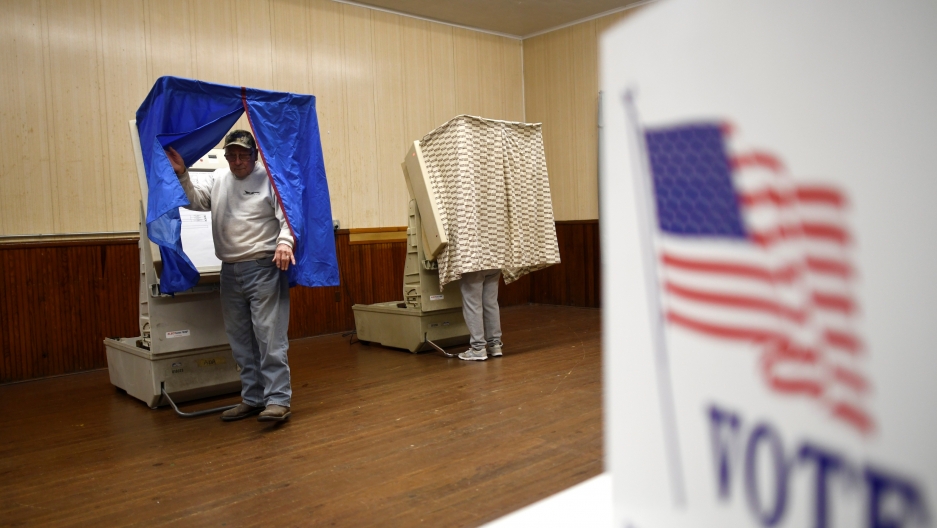 A man exits the voting booth after casting his ballot at Pillow Boro Hall in state and local elections in Pillow, Pennsylvania, Nov. 5, 2019.

Some voters in Washington state can now cast ballots in the presidential primary on March 10, 2020, straight from their smartphones or personal computers, The World has learned.

Nearly 19,000 overseas and military voters registered in Pierce County, Washington, now have the option of using OmniBallot, a tool created by the Seattle-based company Democracy Live, to cast their ballots electronically.

“Voters can log into [our] secure portal and mark their ballot — securely and independently — which is really, really important."

“Voters can log into [our] secure portal and mark their ballot — securely and independently — which is really, really important,” said Bryan Finney, Democracy Live’s CEO and founder.

Despite opposition from security experts and government officials who say such internet-based tools introduce unnecessary risks in the election process, a growing number of jurisdictions are piloting and adopting these systems. For example, a district that includes Greater Seattle is, for the first time in American history, allowing all eligible voters to use a mobile app created by Democracy Live to cast votes in a board of supervisors election.

In most cases, though, mobile voting has been restricted to overseas and military voters, as well as people with physical disabilities. The Voatz app has been used in elections in Colorado, Oregon and Utah. Officials in Utah County, Utah, say they’ll allow overseas, military, and voters with disabilities to use the Voatz app for upcoming presidential primaries, as well as the presidential election in November 2020.

But with the threat of foreign and other interference looming, election security experts are raising the alarm about introducing new, internet-based voting systems that could be vulnerable to hacking. Government officials and security researchers say conducting elections online introduces unnecessary risks.

In its bipartisan report on Russian interference, released in 2019, the Senate Intelligence Committee warned that “states should resist pushes for online voting.”

“One main argument for voting online is to allow members of the military easier access to their fundamental right to vote while deployed. While the Committee agrees states should take great pains to ensure members of the military get to vote for their elected officials, no system of online voting has yet to establish itself as secure,” the report read.

Related: Is the US ready to stop foreign meddling in 2020 vote?

“Russia attacked our elections in 2016. It's not theoretical. It's not hypothetical."

“Russia attacked our elections in 2016. It's not theoretical. It's not hypothetical,” said Marian Schneider, president of Verified Voting, a nonpartisan organization that promotes the responsible use of technology in elections. “Interfering in our elections ... is a real threat, and it's persistent and it's not going away anytime soon. So, we need to mitigate the risks to our democracy instead of increasing them.”

“Venturing into the internet does increase the risk in a way that can't adequately be protected at this juncture, given the state of technology,” Schneider said.

"Opening email attachments from people in an election is not a good idea. And although we do take precautions when we receive emails to open them up in a sandbox and isolate them, it is still a much inferior option ... to an encrypted app or an encrypted portal," Anderson said.

Still, Anderson said, the preferred option is always the low-tech one.

“The first and foremost option is returning by mail, which… the vast majority of our [overseas and military voters] do. And that's the way we want it to be.”

Officials say the goal of such projects is to make the ballot box more accessible to overseas and military voters who face unique challenges.

“There are service people and citizens living overseas that are in places where regular mail service isn't an option,” said Paddy McGuire, Mason County’s chief of elections. “This gives them another way of participating. And we think that's a good thing.”