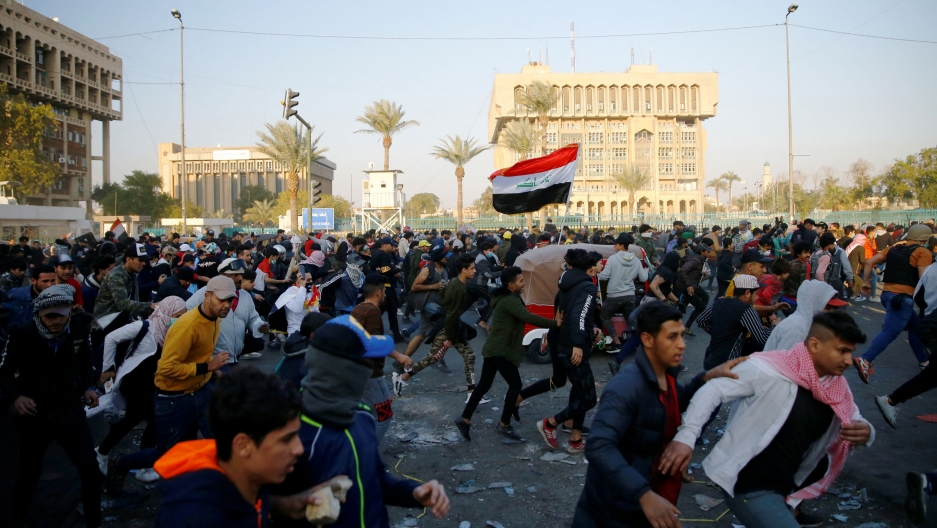 Iraqi demonstrators run for cover as they clash with Iraqi security forces during ongoing anti-government protests in Baghdad, Iraq, on Jan. 31, 2020.

Young Iraqis have spent four months in the streets, calling for an end to a corrupt political system that has largely failed them. In recent months, security forces have killed more than 500 protesters and thousands have been wounded.

On Jan. 24, the populist Shia cleric Moqtada al-Sadr announced he would cease support for the protests against Iraq’s ruling elites, which led some of his followers to withdraw from Tahrir Square, the center of the protest movement in Baghdad.

Given that the Sadrists emerged since the 2016 demonstrations as the backbone of anti-establishment street mobilization in Iraq, many observers expected that the protest movement, which has been challenging the authority of Shia groups in their own constituencies, would come to an end. Until last week, there was still a widespread belief among the dominant Shia factions that the current wave of protests was Sadrist at its core and that it would lose momentum if Sadr reaches a deal augmenting his share of power. Indeed, negotiations between Sadr and Iranian-backed factions that lead the largest parliamentary alliance were underway, partly motivated by the pan-Shia solidarity that emerged after the American assassination of Iranian top general Qasem Soleimani and his closest Iraqi ally, Abu Mahdi Al-Muhandis.

However, to the surprise of these factions and Sadr himself, the demonstrations have escalated in the streets of Baghdad and southern cities, and were boosted by the participation of university students who have been demonstrating every Sunday.

This time, protesters publicly denounced Sadr’s new position, and some chants targeted him. In the past week, it has become clear that this movement can survive without the influential cleric’s backing. Further, the Sadrist base itself, whose identity has two main components — one is anti-establishment and pro-change, and the other is Islamist and Shia-centric — is facing an internal crisis as many protesters from Sadrist strongholds, such as Sadr City in Baghdad, decided to stay in the squares. One of Sadr’s longtime adherents in Nassiriyya challenged the leader’s instructions and joined the protesters in Haboubi Square. While a large part of his base remains loyal to him, Sadr no longer dominates street mobilization.

A new generation of mobilized and increasingly politicized young Iraqis has emerged, and none of the existing societal and political groups is capable of fully containing it. Although they are still geographically fragmented and lack a central leadership, the movement has developed its own discourse and narratives, and now celebrates its own martyrs and victims, which further distinguishes it from all established religious and political groups, including the Sadrist movement.

The persistence of this movement is in large part a function of the country’s grim economic outlook. Iraq has one of the highest rates of demographic growth in the Middle East, and more than 58% of its population are under age 24. This youth bulge not only creates a large demand for jobs, but also a stronger societal tendency towards change and an increasing detachment from outdated forms of authority.

The current crisis is triggered by the mounting imbalances in the ruling elite’s distributive and representative politics. After almost a decade of lavish and irresponsible abuse of Iraq’s oil revenue (which accounts for 95% of the government budget), the plummeting of oil prices since 2013 and the huge expenses of the war against ISIS have significantly diminished the state’s capacity to deal with the increasing demand for better services, infrastructure and jobs. Meanwhile, ruling factions have used the state’s resources to sustain their patronage networks. Iraq’s protest movement started as a call against corruption. Transparency International’s 2019 Corruption Perceptions Index ranks Iraq 162 out of 180 countries. Widespread corruption has only exacerbated poverty and frustration across the country. The poverty rate in southern cities such as Nassiriyya, where the protests have been most intense, has risen to more than 31%.

Rather than opening the political space for new forms of political mobilization in order to repair the system’s broken legitimacy, ruling factions have become more dependent on extra-legal violence to protect their privileges. This has left no space for advancement other than through their controlled-channels. Many youth have had to choose between membership in regime-allied militias or unemployment.

The current protest movement in Iraq must be understood as an outcome of a structural strain in state-society relations, representing an evolving conflict between an oligarchy that is unwilling to change the system which it parasitically lives off of, and a segment of the population that has more to lose by accepting the status quo than by challenging it.

As more university graduates and students become involved in street politics, awareness is rising of the need for a functioning state whose resources are not apportioned among ruling oligarchs and paramilitaries. What worked in the past to appease protesters will no longer be sufficient. This leaves the ruling factions with two options: ignore the protesters’ substantial demands and escalate the security crackdown on them — potentially pushing some to embrace more radical and perhaps violent alternatives — or grant real concessions that result in a drastic change in the regime’s distributive and representative politics.

In either case, ruling factions are dealing with a new reality that is unlikely to go away in the foreseeable future and will continue to be fed by their failures in responding to the underlying causes of this revolt.