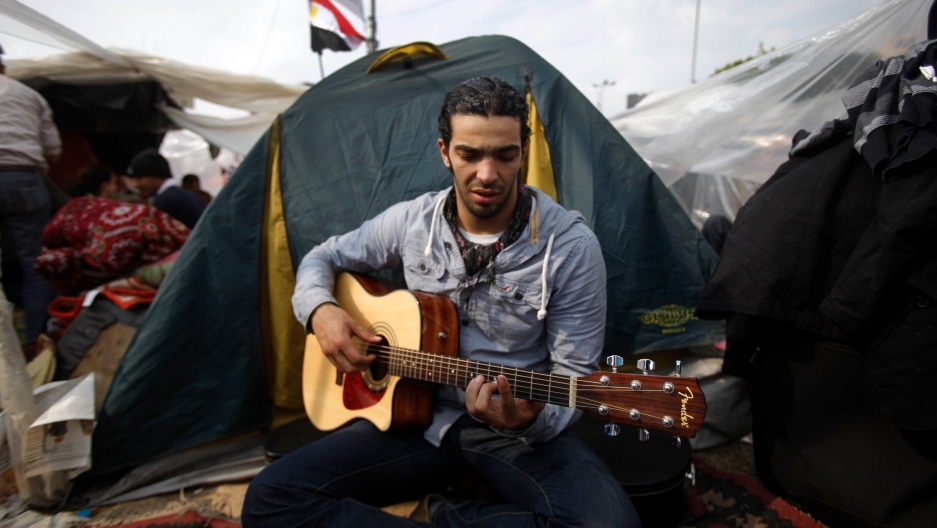 Ramy Essam in Tahrir Square in Cairo, Egypt, 2011. Essam wrote the song "Go Away" that became an anthem for many of the protesters at the time.

It's been nine years since the Tahrir Square protests in Egypt successfully overthrew dictator Hosni Mubarak, but the country has struggled in the years since. 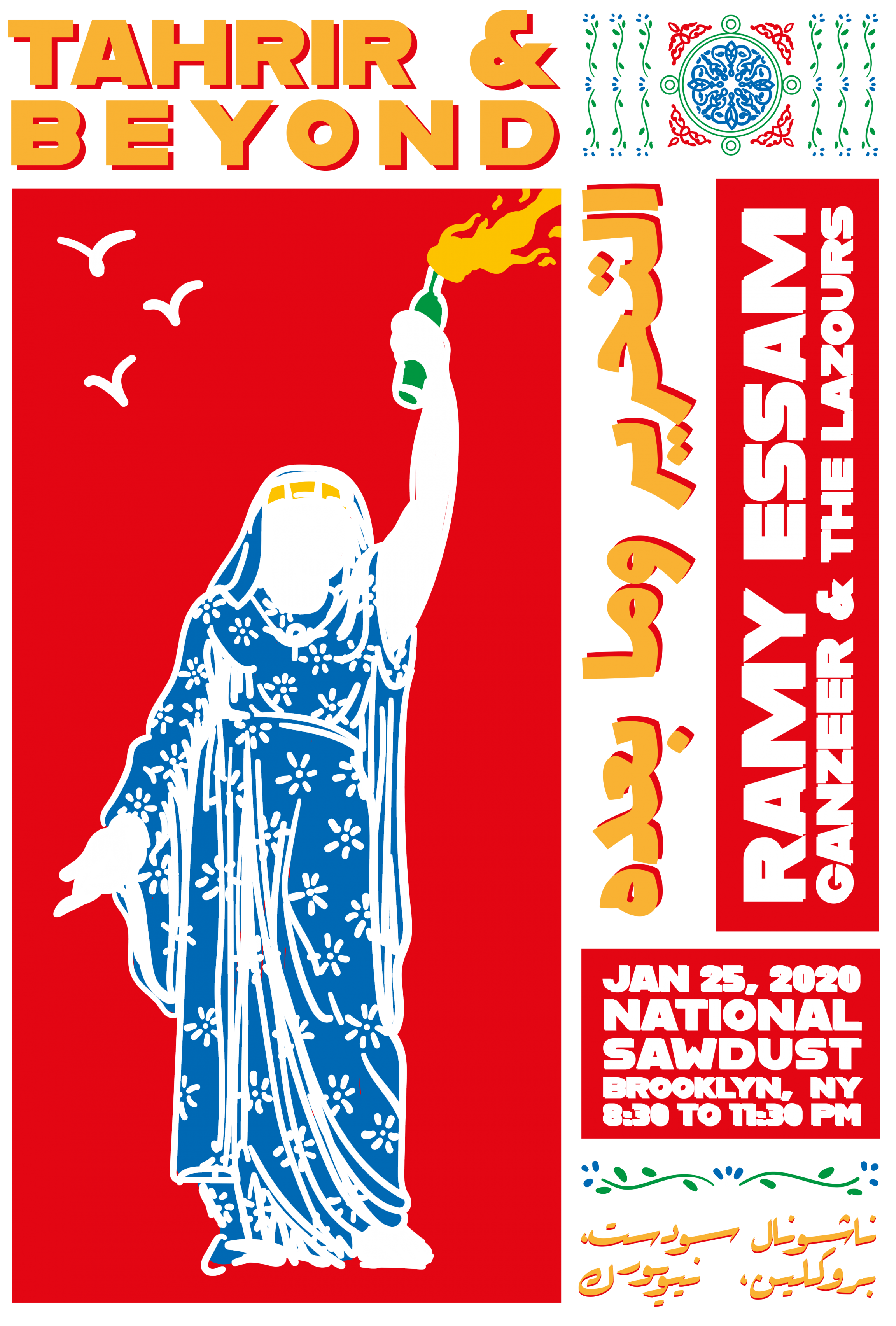 Ramy Essam and Ganzeer are teaming up to commemorate the Egyptian revolution on Jan. 25 in New York.

Since 2011, Egypt has seen through multiple leaders, a coup and crackdowns on free speech. Musician Ramy Essam and visual artist Ganzeer know that better than most. They were two of the most influential artists of the Egyptian revolution. Now, both live in exile. But their work still packs a punch. Essam and Ganzeer are teaming up to commemorate the Egyptian revolution on Jan. 25 in New York. It will be a night of music, commentary and visual arts celebrating the younger generation of Egyptians that led the protests and the ongoing struggles.

The World’s host Marco Werman speaks with Essam and Ganzeer about disillusionment, hope and their upcoming music show celebrating the anniversary.

Marco Werman: What do you want people who see it to get out of it?

Ramy Essam: My main goal was — everything I'm trying to do as an artist, especially in a day like that — really to remind the people that it's not over because it's getting so hard in Egypt. And maybe I have a better chance of being outside Egypt at the moment. And I want to do my best to give this hope to people and to remind everybody that the story didn't end. We're still fighting, even if it's in different form, in different places, different ways.

I mean, it has been nine years, as you say, and the Egyptian uprising that began at Tahrir ultimately did not achieve what the protesters wanted, which was true democracy. So, as you look back at what's happened since the Tahrir Square protests, how do you both feel?

Ganzeer: You know, obviously, there's a bit of trauma and depression to deal with, but I think these performances are an awesome way for us to deal with them our way because based on last week's performance alone — just the energy in the bar — it was nuts, you know. And all these people — there was a big Egyptian diaspora presence. And a lot of them were people that I met through different events prior. And I could tell the difference. You know, there was, like, I met them before and I could tell that they were depressed — having been here for awhile and kind of been away from Egypt and the way things had gone. And last week, it was like relighting the spark all over again. The other thing is one of the anthems of the Lebanese uprising right now on the front lines. Someone shared a video with me on Twitter where protesters are kind of facing off with police, and they took with them a bunch of speakers. And we're playing one of Ramy's songs, not one of the songs from way back from 2011, but one of the songs he put out while in Sweden, which I think is a testament to, like, "No," you could still participate and kind of influence from a distance, very powerfully.

So, what you're doing sounds like it's helping Egyptian expats anyway. How does music and art help you to reconcile that incomplete revolution?

Essam: I'm always taking my music as my therapy and as my first friend. Sometimes I don't find anybody else but this friend with me. And when I was saying I want to share hope with people through my music, I'm helping myself as well. Sometimes, I play guitar to myself to lift my spirit up, so it's a big, big reason why I'm still hanging around in this life.

Both of you live in exile from your native Egypt. If you lived in Egypt, would any of your work be possible? Could you commemorate Tahrir as a multimedia project?

Ganzeer: Definitely not, which is why this event is so important. The state of Egypt, the current dictatorship, has kind of controlled the narrative, the postrevolution narrative, for a very long time and has poisoned that narrative very much. And there's a lot of anti-revolutionary propaganda. And by forcing us into exile, they think they have rendered us powerless. But I think having an event like this shows that, you know, even in exile, we're going to keep the spirit going.

So, it allows you to flex your artistic and kind of political muscle. But I'm curious why you do this if ultimately it's art that Egyptians in the center of these political problems can't see?

Essam: OK. We are talking about art. And art is like the strongest, peaceful weapon we could use against dictatorship. If we are in Egypt or not, like Ganzeer mentioned before, we can still release a song and it can make a huge impact, even in the whole region. I've been experiencing that a lot when I'm in exile. Same thing [is true] for Ganzeer when the movement in Egypt just a couple of months ago was trying to rise up again. And he made like a new artwork for the dictator, and people were using it all over the world. So, we know that we can still help making any kind of change with our art. We learned very well that the change won't happen in one day. And we started something in 2011, and we won't stop. I have lots of things that will keep me doing what I'm doing either from the early dreams we've been carrying from 2011 or all the friends that are in jail at the moment. They have to know that we are still fighting for them and for the same cause.