On Sunday, Sergey Valitsky and his 6-year-old son, Valentin, took a bus into the hills to watch the sunrise. It wasn’t a trip they would make every weekend, but this was not just any sunrise: It would mark the end of 40 days of polar night and offer some respite during one of the bleakest winters on earth.

Murmansk, a Russian port near the border with Norway, is the largest city in the Arctic Circle. The far east of Russia might be colder, and the few inhabited areas further north might endure an even longer polar night, but nowhere else do so many people spend so long in near-perpetual darkness.

“It’s a period you simply push through. ... You need to have a sense of humor. At work, we take breaks — have a tea, have some sweets, have a sit-down, have a joke.”

“It’s a period you simply push through,” said Sergey’s wife, Kristina Valitskaya, before her husband and son set out to welcome the sun at 12:29 p.m. “You need to have a sense of humor. At work, we take breaks — have a tea, have some sweets, have a sit-down, have a joke.” 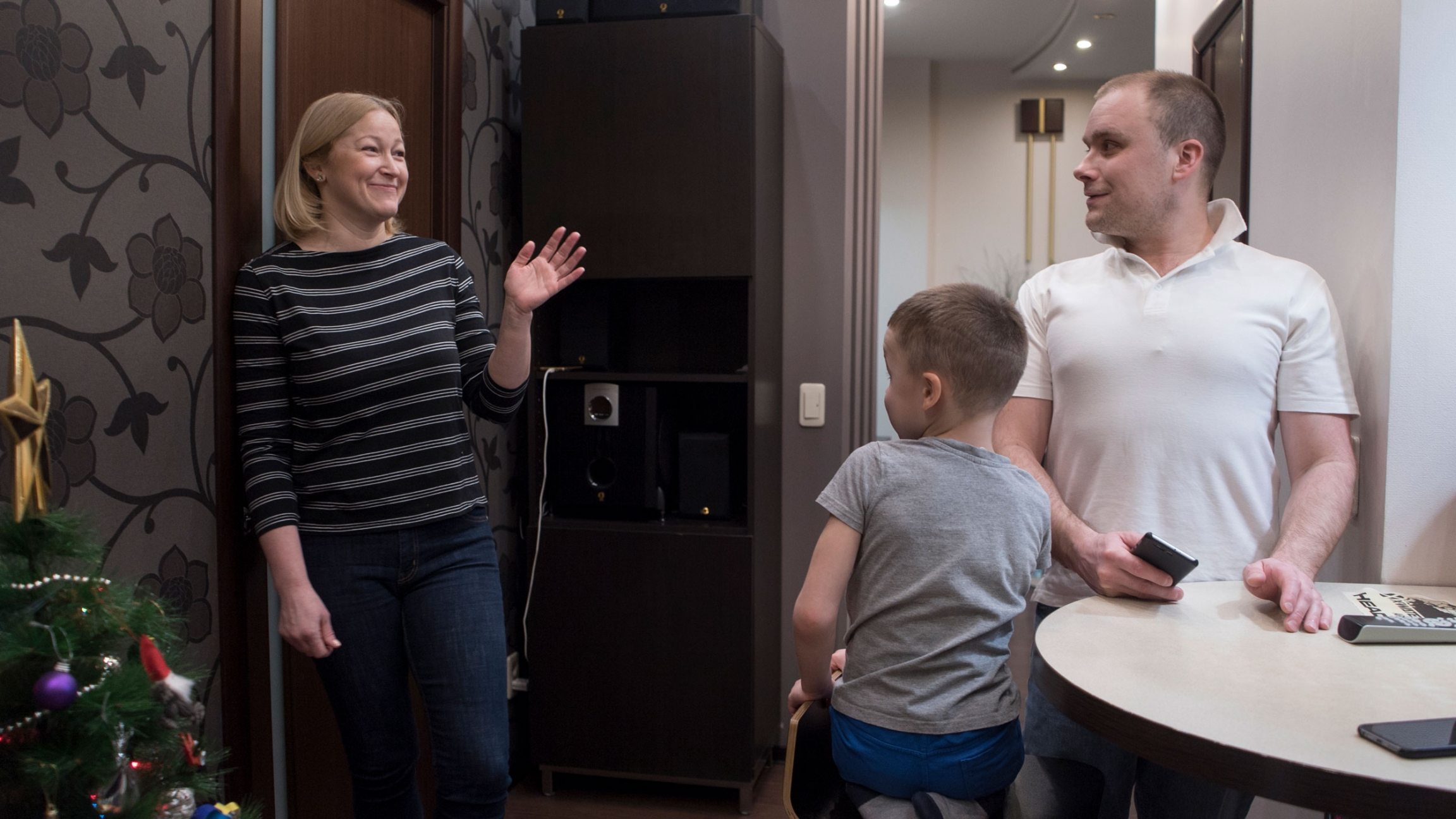 Sergey Valitsky and Kristina Valitskaya, along with and their son, Valentin, in their apartment in Murmansk, Russia.

For Sergey, a 37-year-old lawyer and Murmansk native, the conditions are something anyone can get used to. Still, the family is thinking about relocating further south sometime in the future. “Where it’s not winter — 9 months a year,” he said.

The Valitskys live in a Stalin-era apartment block just off Lenin Prospect, the city’s main drag. The road is decorated with twinkling holiday lights and buildings are painted in pastel pinks, greens and oranges that seem to glow in the few hours that the sun skirts below the horizon. On the outskirts of the city, grey blocks from the late Soviet period dominate.

For a few hours a day — especially at the beginning of the polar night in early December, or toward the end in mid-January — there is indirect light, as the sun creeps closer and is reflected by thick snow. Bright shop fronts and restaurant signs also cut through the gloom: among them, the golden arches of the world’s northernmost McDonald’s.

But the darkness takes its toll on the population of some 300,000. The rate of alcohol consumption and alcohol-related deaths, though falling, are higher than the national average, and psychological disorders among young people are significantly more common than elsewhere in the country.

“At first sight, it seems living in Murmansk is impossibly hard, but everyone has their ways. ... The most common problems at this time of year are disrupted sleep, bad mood, negative emotions. ... In harder cases, there might be antidepressants or sleeping pills, but not so many. The majority of people get by.”

“At first sight, it seems living in Murmansk is impossibly hard, but everyone has their ways,” said Marina Pechenkina, a doctor at the city’s Alfa Health Clinic. 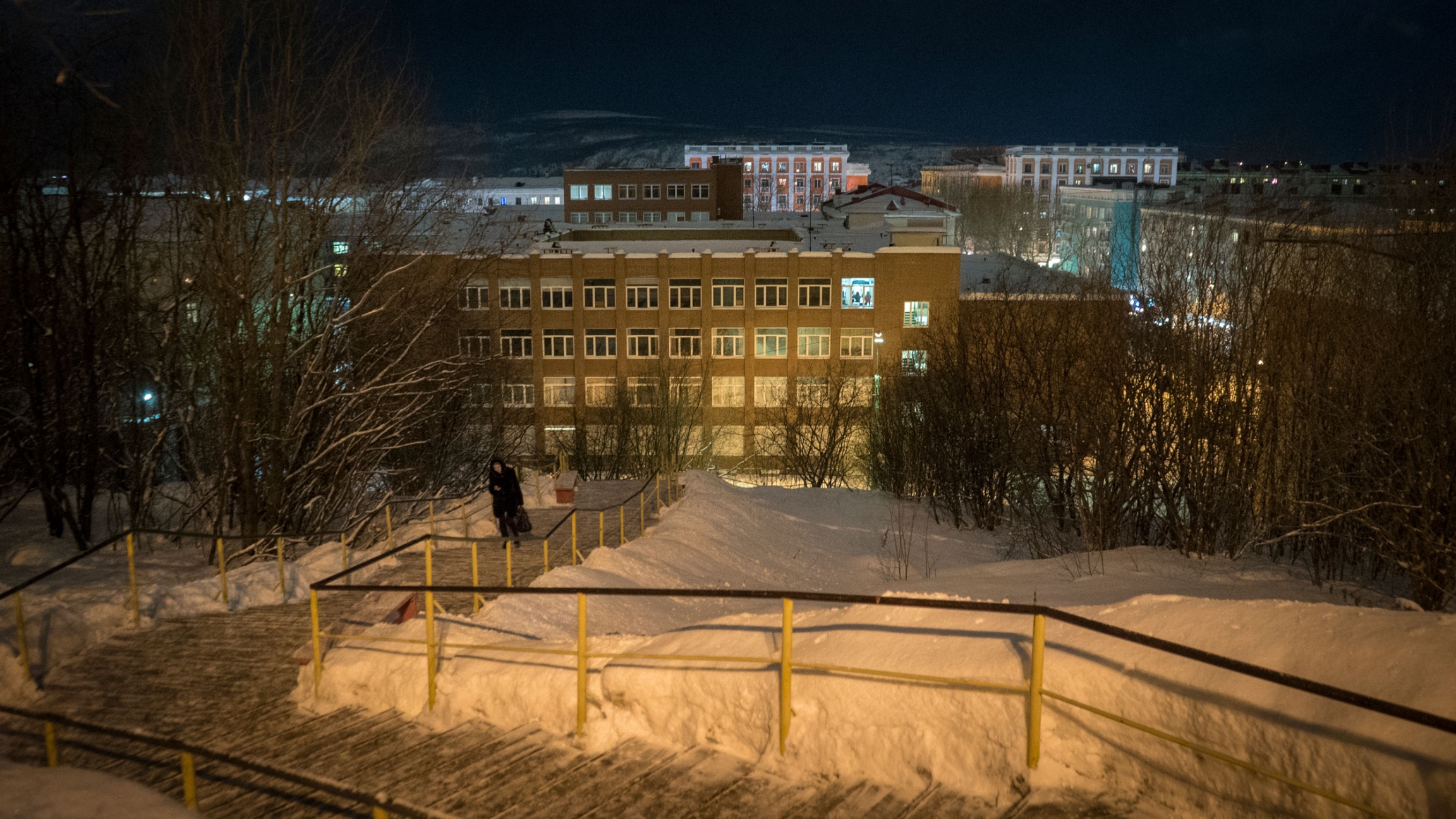 Residential buildings in the Arctic darkness of Murmansk, Russia.

“The most common problems at this time of year are disrupted sleep, bad mood, negative emotions,” she said. Doctors can offer vitamin therapy, light therapy or even art therapy. “In harder cases, there might be antidepressants or sleeping pills, but not so many. The majority of people get by.”

Pechenkina, who was born in the city and worked elsewhere for several years before returning, half-jokes: “When I’ve lived in other places it is surprising — in the day there is sunlight.” 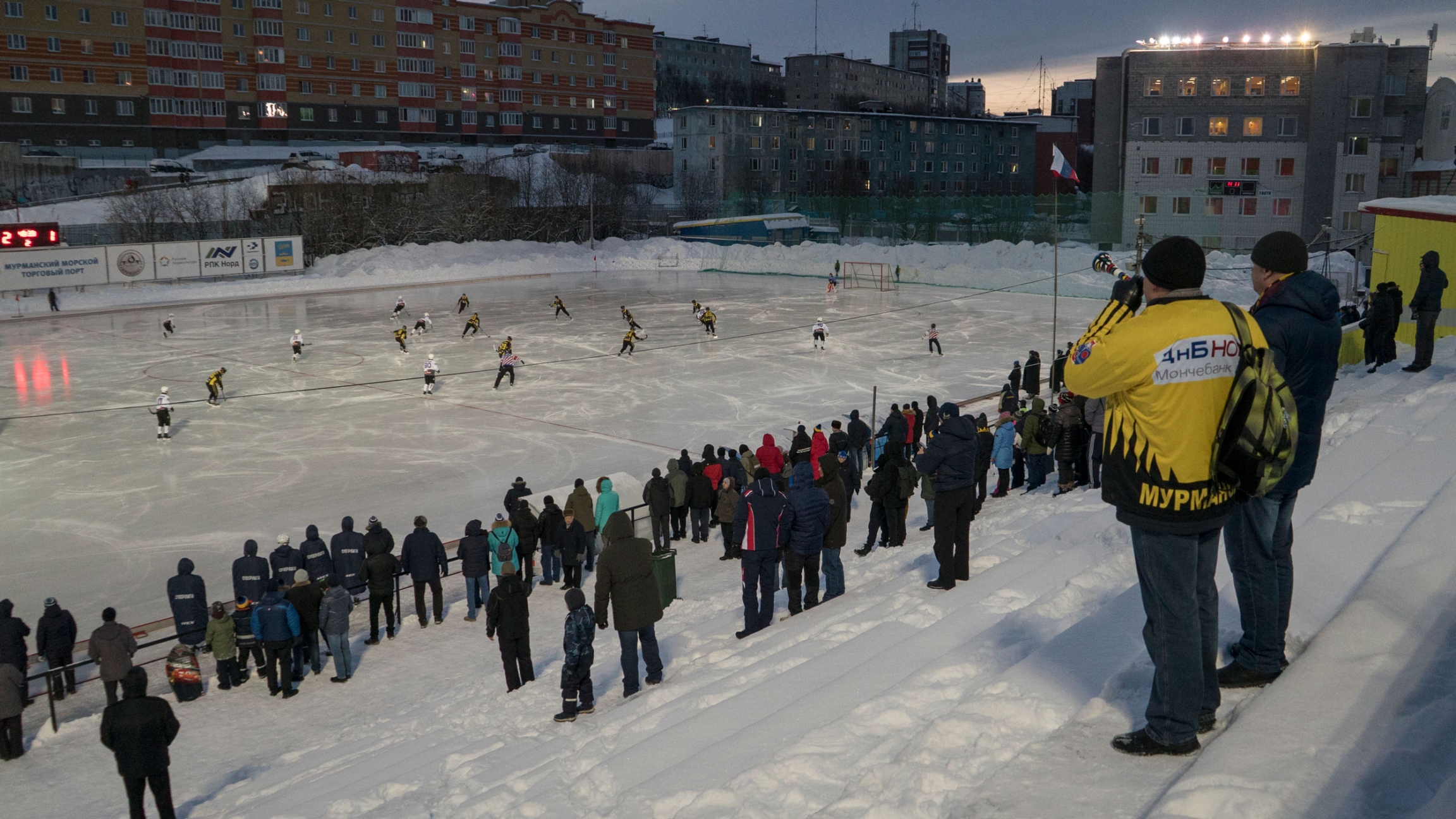 A local hockey club in Murmansk, Russia, plays a game.

Like other children growing up here in the Soviet Union, Pechenkina, 47, underwent daily ultraviolet light therapy during the winter to stimulate the production of vitamin D, which is normally produced in sunlight. Around a dozen pupils would strip down to their underwear and gather round a glowing quartz lamp, wearing protective goggles and hats.

Today the practice has been phased out because of potential health risks and schoolchildren now take vitamin supplements instead. 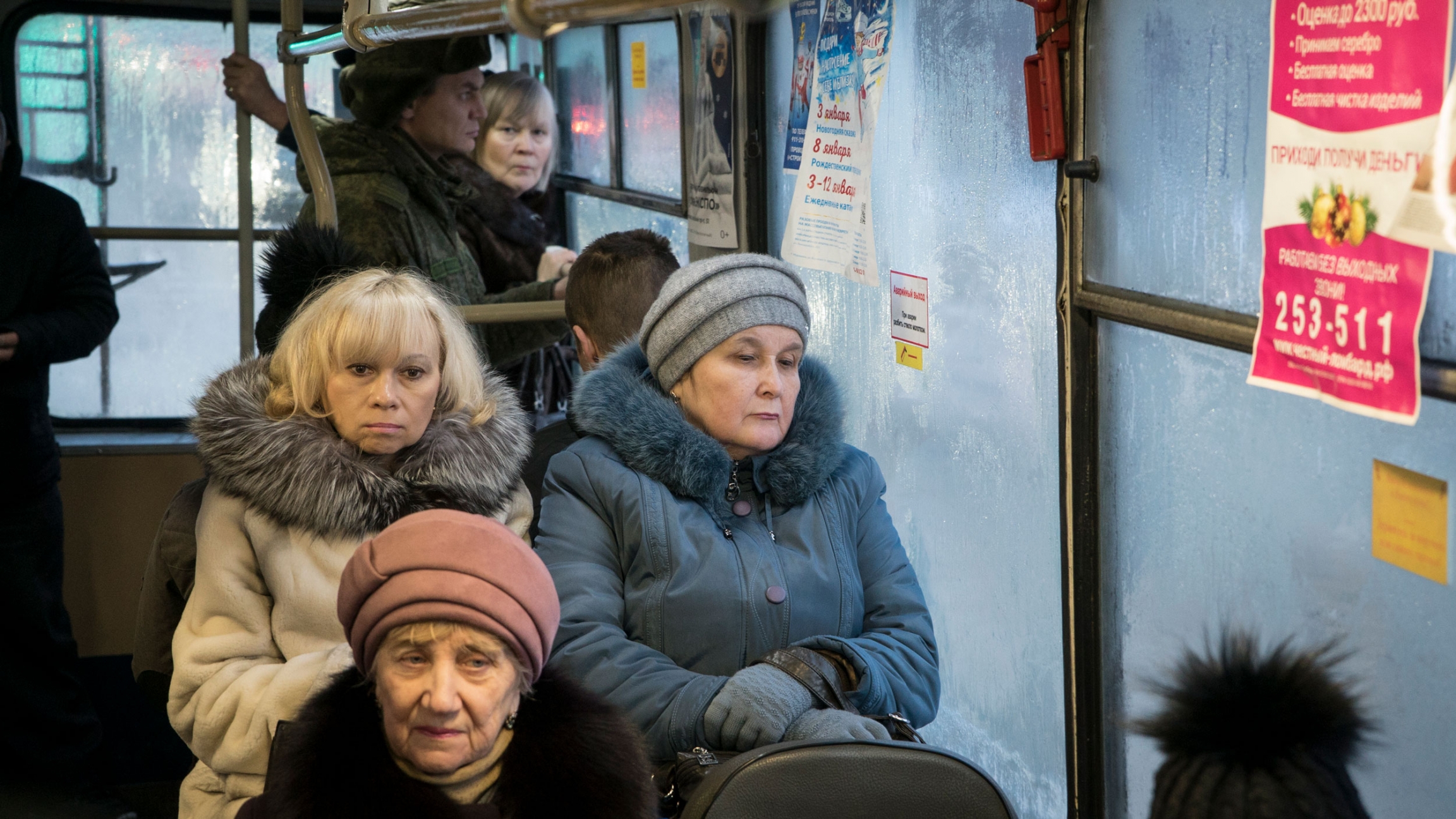 Passengers in a trolley bus in Murmansk, Russia.

Until just over 100 years ago, the area was sparsely inhabited by Indigenous Arctic peoples. The Russian Empire founded the city of Romanov-on-Murman during World War I to take advantage of the only year-round port in the west of the country.

Related: Is this remote Siberian language an ancestor to Navajo?

After the Bolshevik Revolution, the city was renamed Murmansk and the region later became the site of a devastating offensive on World War II’s eastern front. By way of memorial, a 116-foot granite soldier known as Alyosha looks down on the city and its Kola Bay, off the Barents Sea, from a nearby hill. 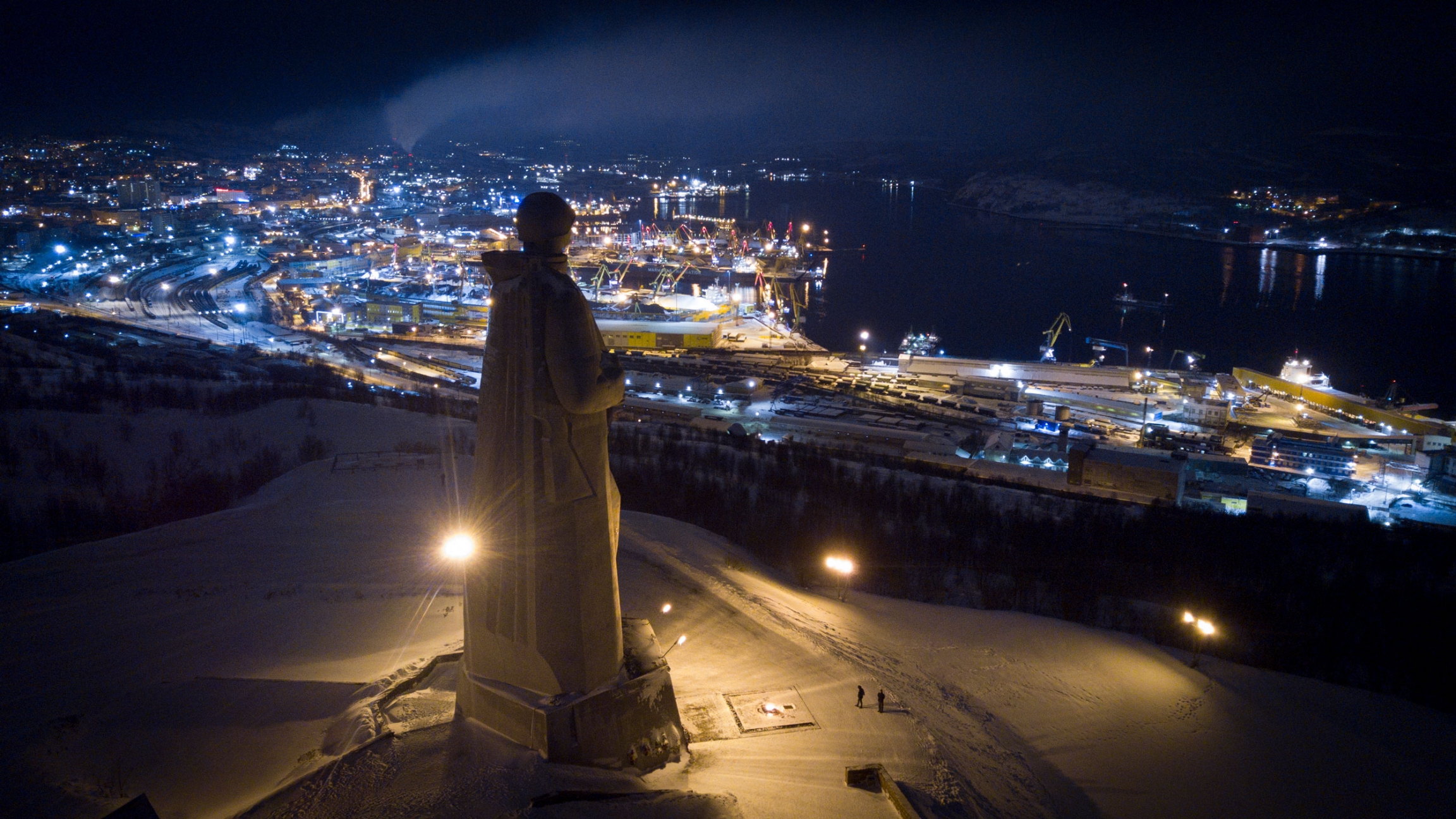 A view of Murmansk and the Alyosha monument.

The population boomed over the Soviet period as authorities developed the port and fishing industry, and extracted the region’s natural resources. A hardship supplement was paid to those able to endure the extreme conditions. But since the collapse of the USSR in the 1990s, industry has declined and the population is decreasing every year — down from a high of more than 450,000.

Related: A Soviet sailor's 50-year-old message in a bottle makes it to Alaska

Psychologist Inga Zhunzhurova reports a lack of energy and difficulty functioning among some of her clients. “I can tell you this for sure: I have more work during the winter.” In the summer, when the sun barely sets, there are also issues with insomnia.

But Zhunzhurova, who was born in southern Ukraine and moved to Murmansk as a child with her father’s job in oil, says the tough conditions foster resilience among the local population. “It brings out something inside. There has to be compensation. On the outside, there’s a lot of cold, so inside there has to be a lot of warmth.” 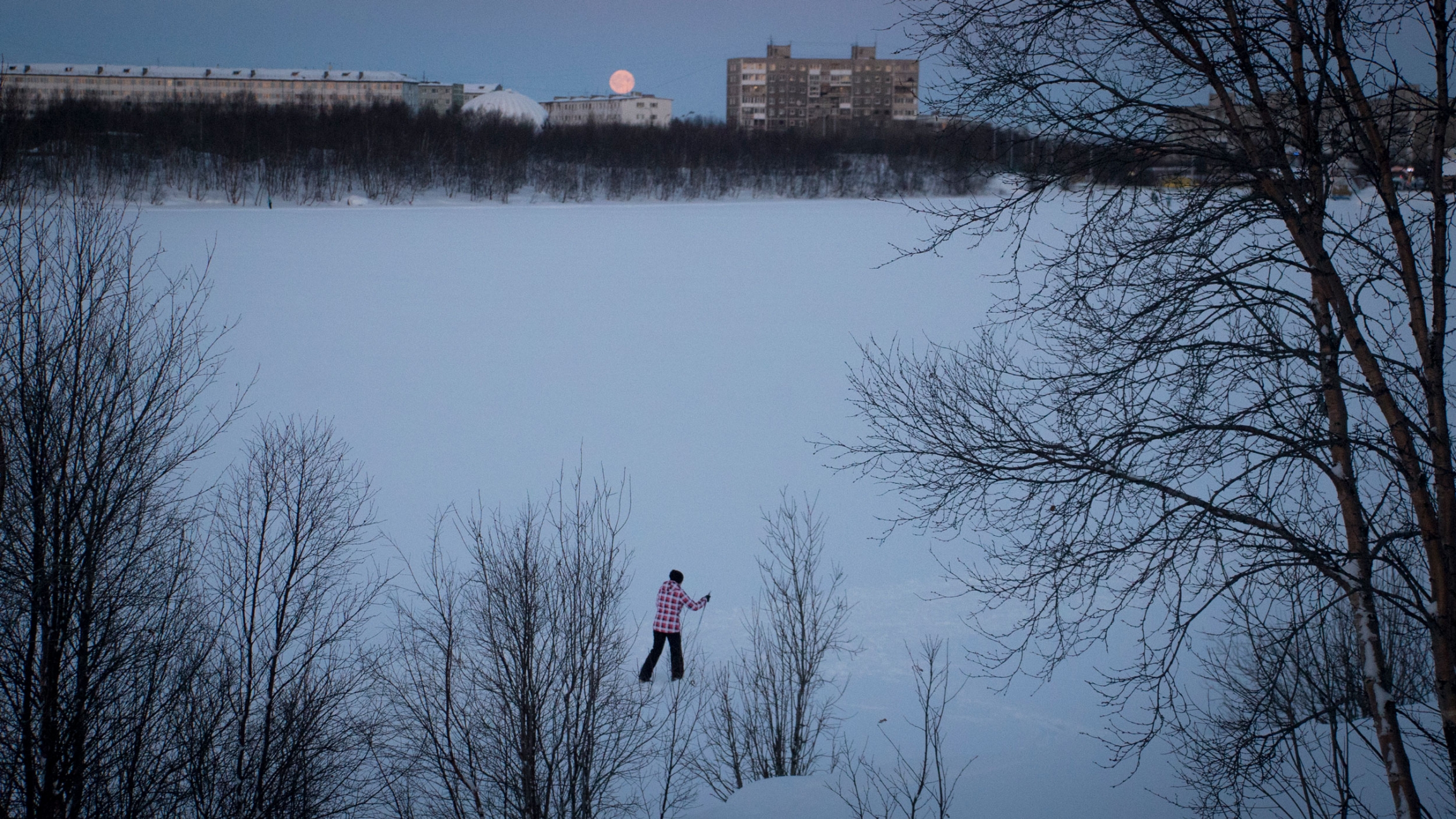 A person skis across a snow-covered area of Murmansk, Russia.

For her, the most important thing is to stay active. Walking, meeting with friends, doing sports: The worst thing you can do during the polar night is to give in to the impulse to stay at home.

Some who understand the importance of activity are the Murmansk Walruses — a group of more than 200 hundred men and women who come to bathe in a hole in a frozen-over city lake throughout the winter. They say the exercise and endorphins are what get them through.

“A person makes their own mood. You can be happy or you can be depressed anywhere."

“A person makes their own mood. You can be happy or you can be depressed anywhere,” said Alexander Spinul, a 47-year-old policeman, in the wooden “Walrus Cottage” by the edge of the lake. On the frozen water outside, others cross-country ski or fish through holes in the ice.

Related: Meet the ice swimmers who put the Polar Bear Club to shame

Still shaking from the shock of his swim, Spinul laughs at the idea of taking vitamin supplements, insisting he gets everything he needs from his diet. “I don’t understand how you can live without herrings, without cod. We catch them ourselves.” 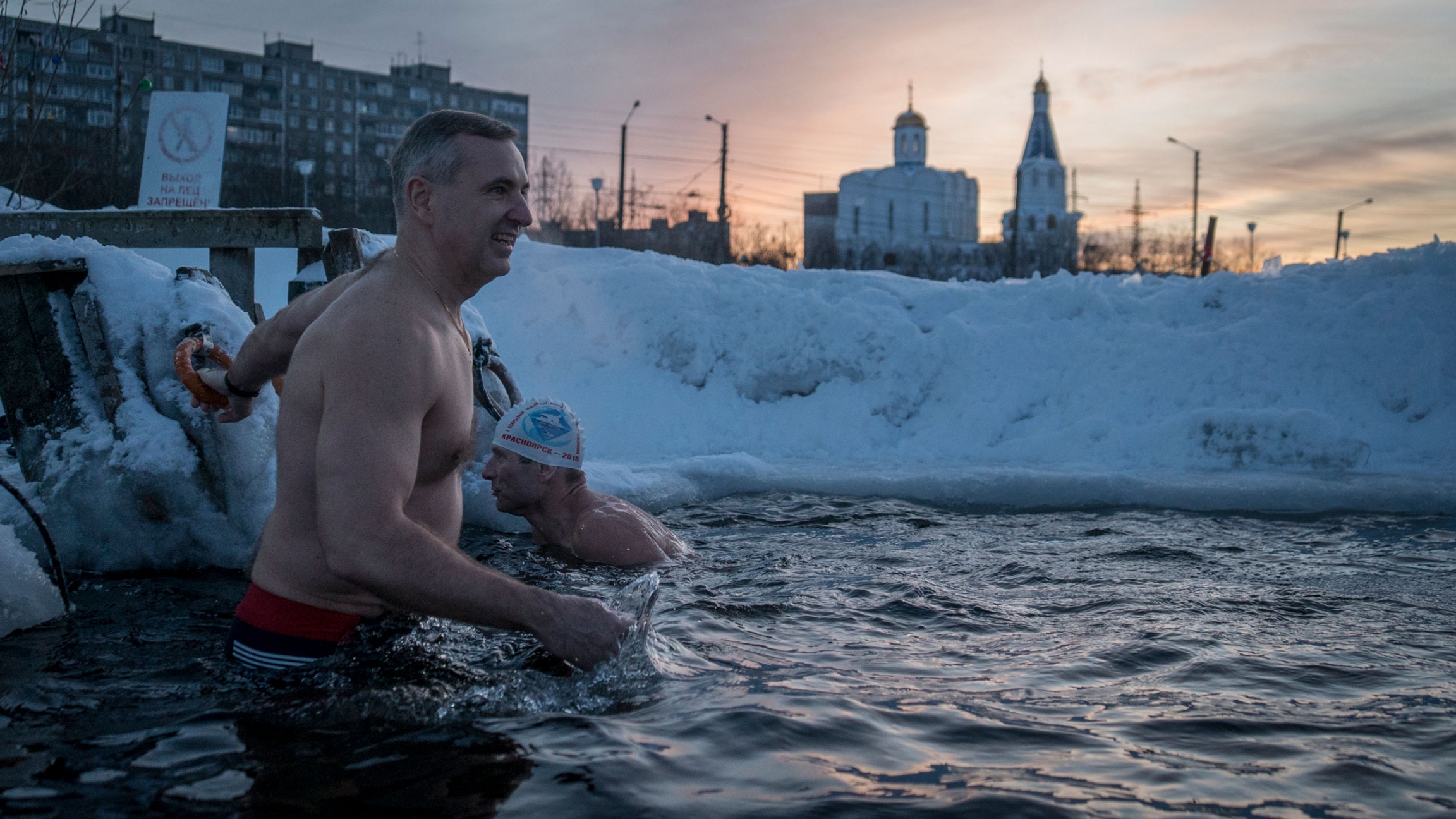 Alexander Spinul, a 47-year-old policeman, swims in an ice hole.

Up in the hills, Sergey and Valentin have arrived to watch the long-awaited sunrise. The city has offered free buses from the center to the aptly named Sunny Hill and around 2,000 other people, some in brightly colored jackets or wearing paper hats in the shape of a rising sun, have also made the trip.

The only problem is that the day is overcast and the sun, due to appear for less than an hour, will not be visible. The mood, however, remains buoyant. A makeshift dance floor has sprung up on the snow, where pensioners in furs move to techno beats and an older man attempts to make an accordion heard over music blasting from speakers.

A stall is offering free cakes and black tea brewed with moroshki or “cloudberry” — an arctic fruit that looks like an orange raspberry. 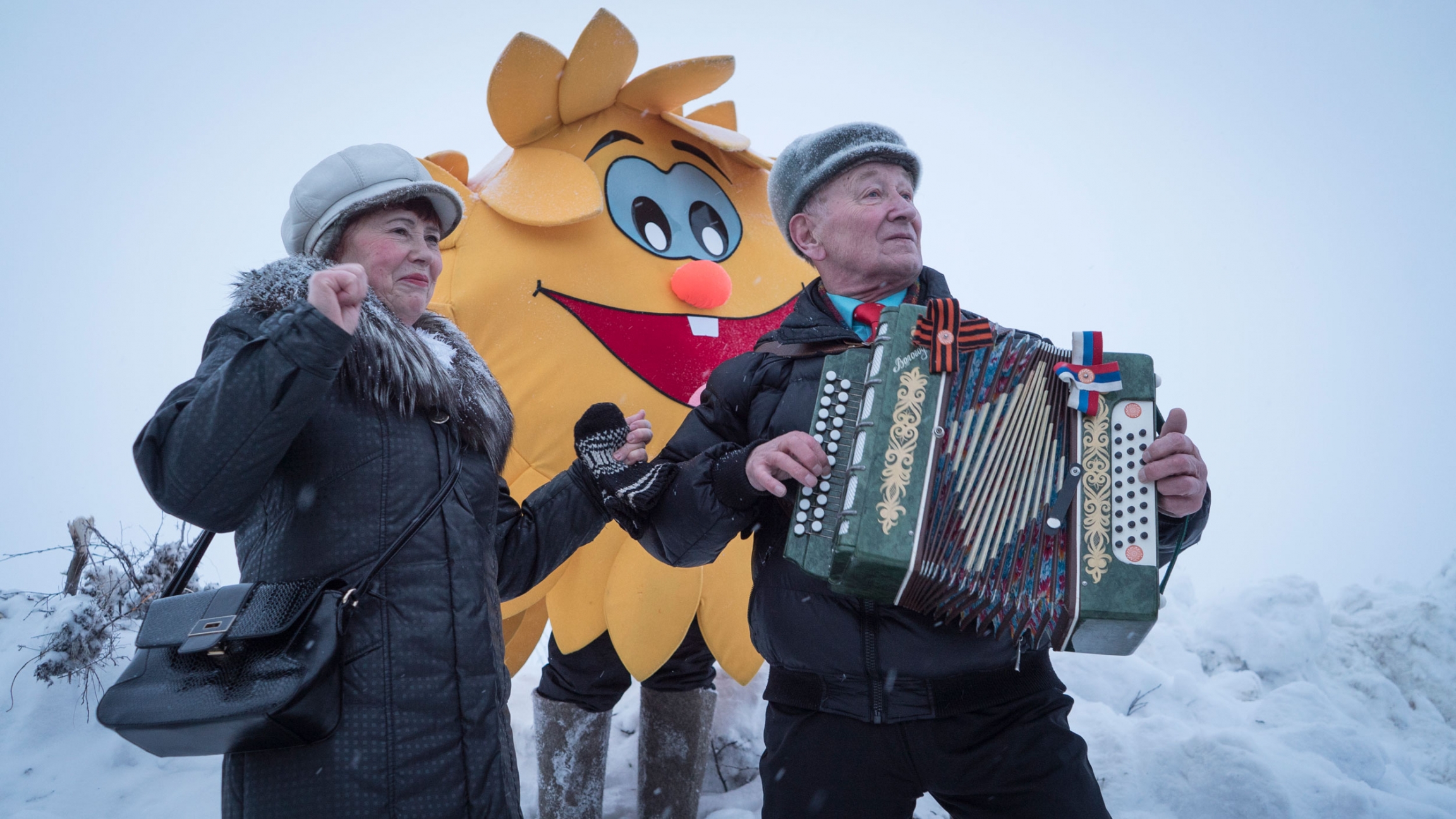 People await the first sunrise in 40 days in Murmansk, Russia, as older man plays an accordion.

Elena Agateyeva, a 50-year-old accountant, admits she has missed the sun but is happy to wait another day for it to appear. “It’s a good opportunity to see people, to have physical exercise,” she said of the party in the hills. “The polar day is the real problem. It’s just impossible to sleep.”

Sergey, watching as his son runs up a mound of snow, strikes a similarly upbeat tone: “There’s no sun today. There’ll be sun tomorrow.” 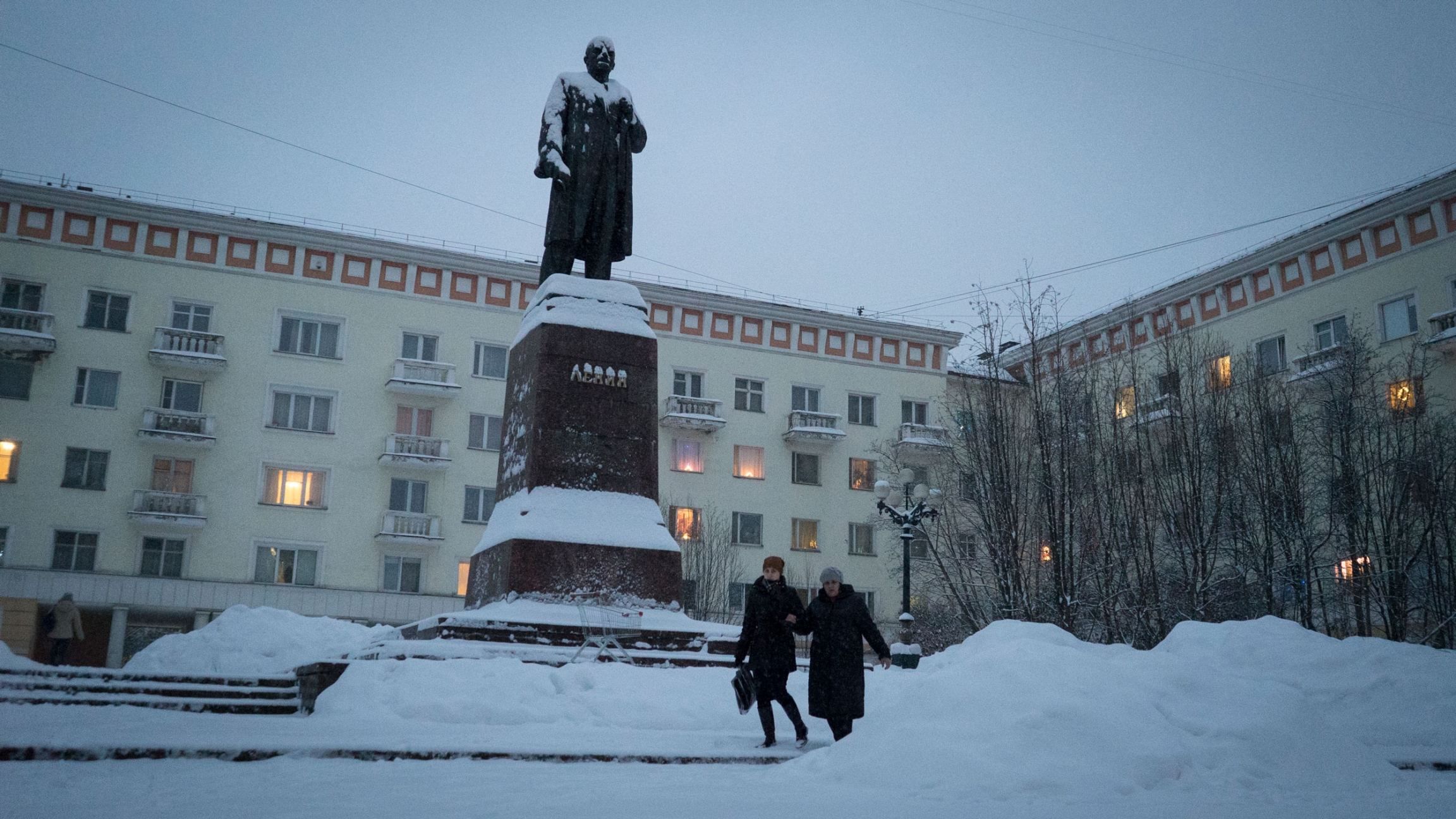 People walk past a statue of Soviet leader Vladimir Lenin in Murmansk, Russia.

Update: A previous version of this story included a caption for the top photograph with an incorrect date. The photo was taken on Jan. 13, 2020.